This incredible modified Mini R56 is as fast as a McLaren 720S and could well be the most powerful road-legal Mini on the planet.

Is there such a thing as too much power? You could argue there’s a point where a car becomes so powerful that it becomes difficult to put all that power down and actually enjoy the driving experience. You could argue that you don’t need more than a certain amount of power and that there’s an optimum amount that’s perfect for any given car, road and situation. You could argue that the figure becomes a bit meaningless after a certain point, and beyond that level, you just start chasing numbers. You could argue all of that… But, at the same time, having a lot of power is a lot of fun, and the more you’ve got, the more impressive it is, and the more exciting it is, and that makes Nikos Kostakis’s insane modified Mini R56 one of the most exciting Minis we’ve ever featured.

This modified Mini R56 (check out our R56 Mini buyer’s guide) makes a lot of power; it’s actually unreal. Nikos reckons it might be the most powerful Mini in the world and he’s certain it’s the fastest street-legal Mini running an N14 engine. We’ve certainly got no reason to doubt any of that, but before we cautiously approach the monster that he’s created, we’ve got to learn a bit about Dr Frankenstein himself. 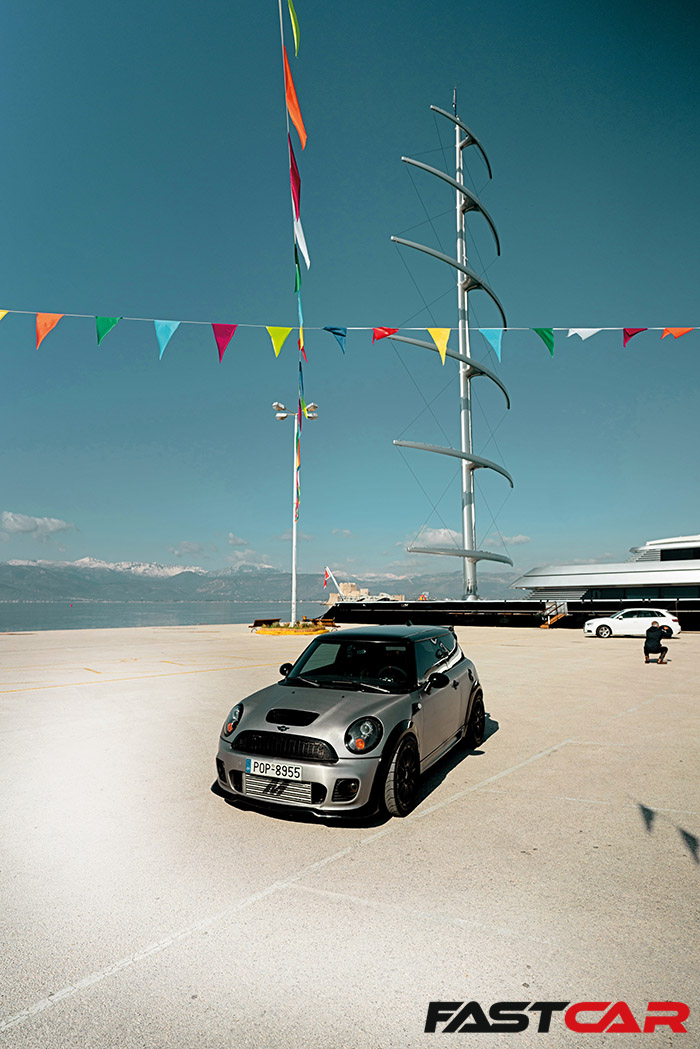 Nikos resides in sunny Greece, and he’s been a Mini fan for quite some time now: “I have been interested in Minis since I bought an R53 for my wife in 2009. I really liked how it behaved on the street and its timeless design,” he tells us, and that led him to go shopping for a MINI of his own. “The first Mini I bought for myself is actually this R56 Cooper S,” he smiles, and it’s since been joined by a Countryman 1.6 D that’s been treated to an uprated air intake and a remap because Nikos can’t leave his cars alone. “I have modified every car I have ever bought, which has included a Mercedes SLK55 AMG, a Porsche Cayenne Turbo, and a BMW X6 50i,” he says, but none of them has been modded to the extent of this project.

“I chose the R56 because it is beautiful, the design is timeless, and it drives great on the road,” enthuses Nikos. “I was planning to do a Stage 2 build, but I never intended to get to the point where I finally am today,” he laughs, and how many times have we heard that before? Over one and a half years, Nikos has put together an absolute beast of a Mini, and at its heart sits that incredible engine. “Whatever modifications have been done to the engine are the choices of my mechanic, who I absolutely trust,” says Nikos, and his mechanic clearly knows what he’s doing as he has assembled an absolute dream spec for this modified Mini R56. The list of engine upgrades reads like the ultimate wishlist of anyone who wants to build a big-power Mini. 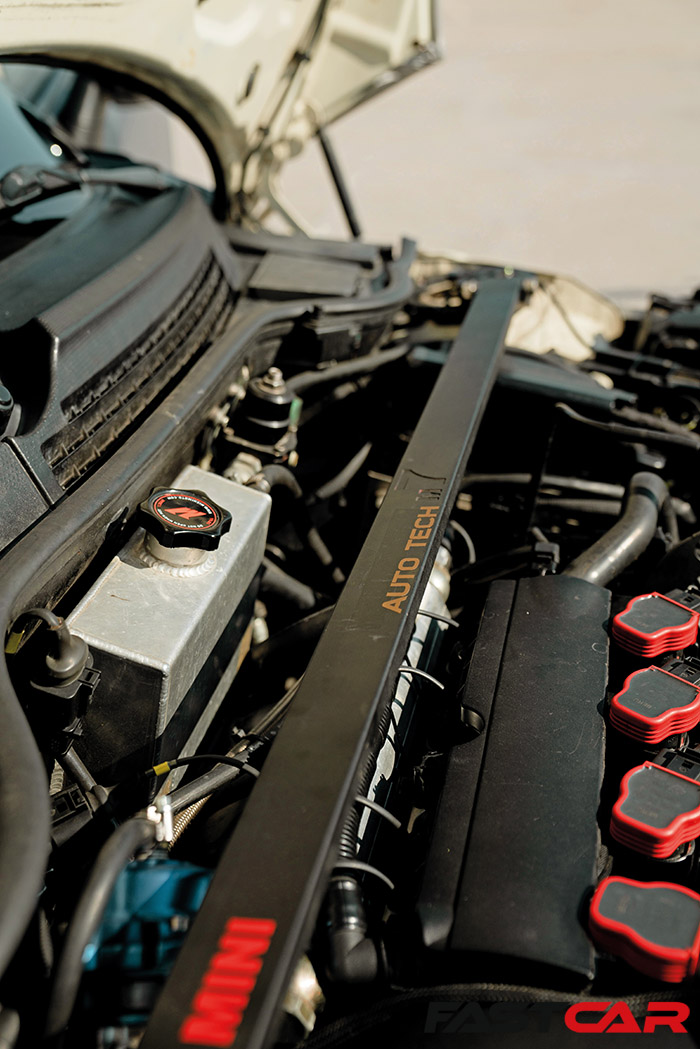 The turbocharged four-pot is equipped with CP pistons, Carrillo con rods, ARP head studs, a Cometic head gasket, ACL race bearings, Boubis Cams camshafts, a Supertech valvetrain kit including intake valves and exhaust valves, and an AEM water-meth injection kit. Obviously, you need a serious turbo if you’re chasing serious power, and Nikos’s R56 runs a Garrett GTX3071R Gen II. Other upgrades include 1000cc Bosch Motorsport injectors, a Walbro fuel pump, Darton sleeves, Audi R8 ignition coils, an Italian RF clutch kit to help the transmission cope with the power, and everything is overseen by an EFI Euro 4 ECU. The end result is an absolutely astonishing 613.7whp, around 700hp at the flywheel, and 543.6lb ft wtq, and those numbers are just insane.

There have been some pretty wild builds in Performance MINI before, but nothing quite as incredible as this. We’ve watched Nikos’s videos showcasing this R56’s otherwordly performance, and it’s achieved a traction-limited quarter-mile time of 11.85 seconds at 132.3mph, and a 100-200km/h time of 5.44 seconds, about as quick as a McLaren 720S… This car is an absolute monster and no mistake. 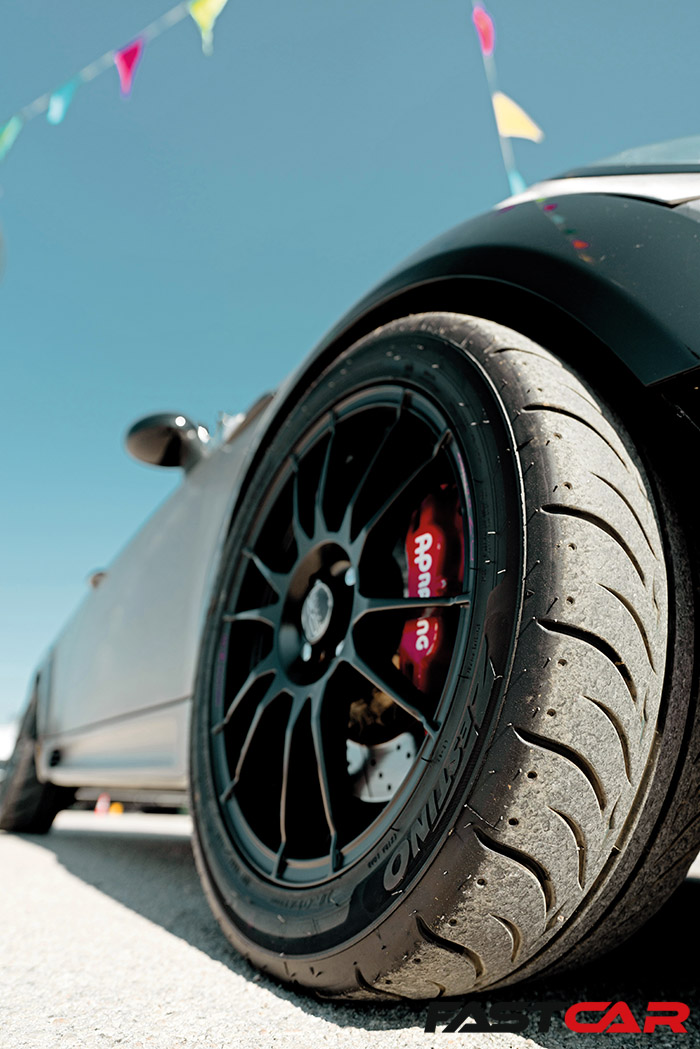 Naturally, Nikos hasn’t just focused on the engine, and his R56 has been treated to a selection of additional upgrades. The car sits on fully adjustable BC Racing coilovers, which enable him to fine-tune the handling perfectly, as well as delivering a welcome drop. These are joined by an extensive selection of Powerflex bushes, and there are also front and rear M7 braces to keep the chassis nice and stiff. The brakes naturally needed to be upgraded as well. You will find an AP Racing big brake kit fitted up front, running hefty 330mm discs, which are clamped by Ferodo DS2500 brake pads, and this combo delivers some serious stopping power.

In terms of aesthetics, Nikos says he took his inspiration from the GP2, and so, while it’s got that OEM look, it’s still got plenty of aggression. All the chrome has been blacked out, and the styling has been further enhanced by the addition of a G-Wing spoiler and the aggressive GP2-style rear diffuser, while the finishing touches are the black-out headlights and smoked rears. Then you’ve got the wheels, and Nikos’s choice is a superb one. “The wheels are 7×17” OZ Ultraleggeras, and I chose them because they are both light and beautiful,” he says with a smile, and those are two very good reasons to pick a wheel. OZ is a great brand that is responsible for some iconic wheel designs, and the Ultraleggeras work so well on the R56, and they fill out the arches to perfection. 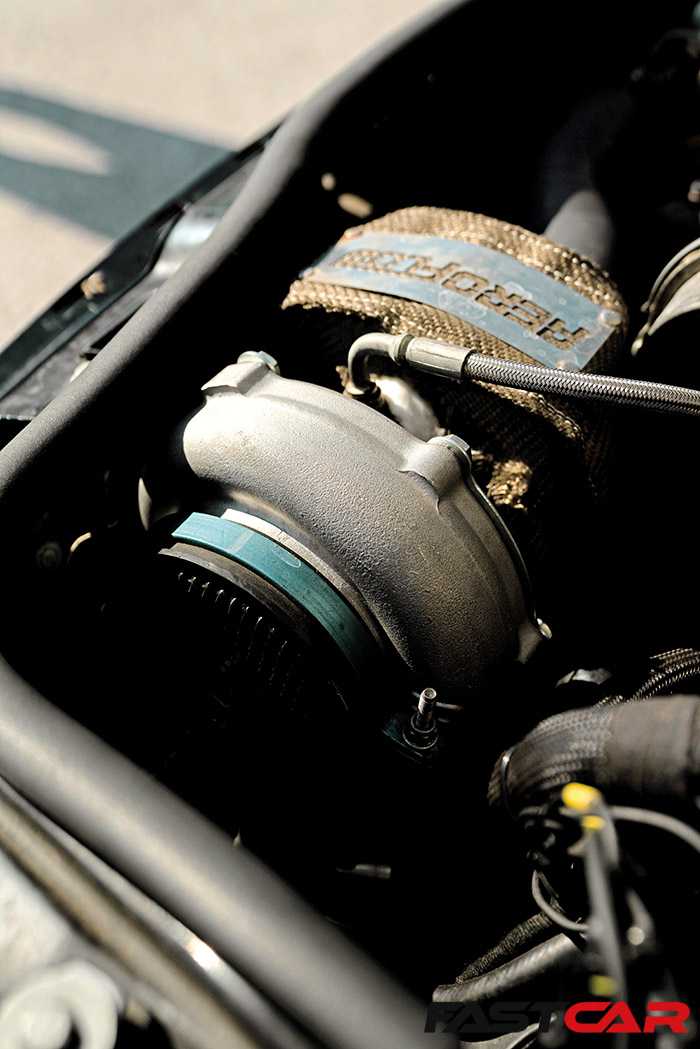 Finally, we make our way inside, and Nikos has continued his GP2-inspired approach here. “I fitted the Recaro seats from the GP2 instead of the factory ones,” he explains, “the steering wheel is from a GP2 and covered in Alcantara, and the red seatbelts are also from the GP2,” he adds. These additions immediately make the cabin feel more special, and the flashes of red with the seatbelts, the stitching on the seats, the centre stripe on the steering wheel and the door trims make all the difference. The dash has also been covered in Alcantara, there’s a JCW carbon gear knob and handbrake handle, and then there are a couple of high-tech additions as well. “There is an AiM dash in place of the tachometer and an AiM Solo 2 on the passenger side, which informs us about the functions of the engine,” says Nikos. “The AiM dash is actually my favourite modification because it has all the engine information and it makes me smile when I turn on the switch,” he grins. Not only is it a very useful and practical addition for such a highly modded car, but it looks cool too, and that’s always a nice bonus.

There’s a lot of debate on the scene about what constitutes a sleeper. While a Mini that’s been lowered, has black wheels and a massive front-mount intercooler stuffed into the front bumper is never going to be a true sleeper, there is absolutely no way anyone, anywhere, would ever expect this Mini to be making over 600whp. We still can’t get over that figure, and not just because it’s so much for a Mini, but it’s coming from a 1.6-litre, four-cylinder engine – the horsepower per litre, and per cylinder, is just unreal. This modified Mini R56 is an absolute monster, and Nikos is an absolute madman for building it, but we love to see people pushing the boundaries of what’s possible, as does he. “What I have learned from this project is that nothing is impossible,” he says with a smile, and that’s a great takeaway from this. That’s a great takeaway from this and the perfect mantra to have in mind when you’re working on your own build. Things might be hard or challenging, but very few things are ever truly impossible, and this mighty modified Mini R56 proves that point so well. 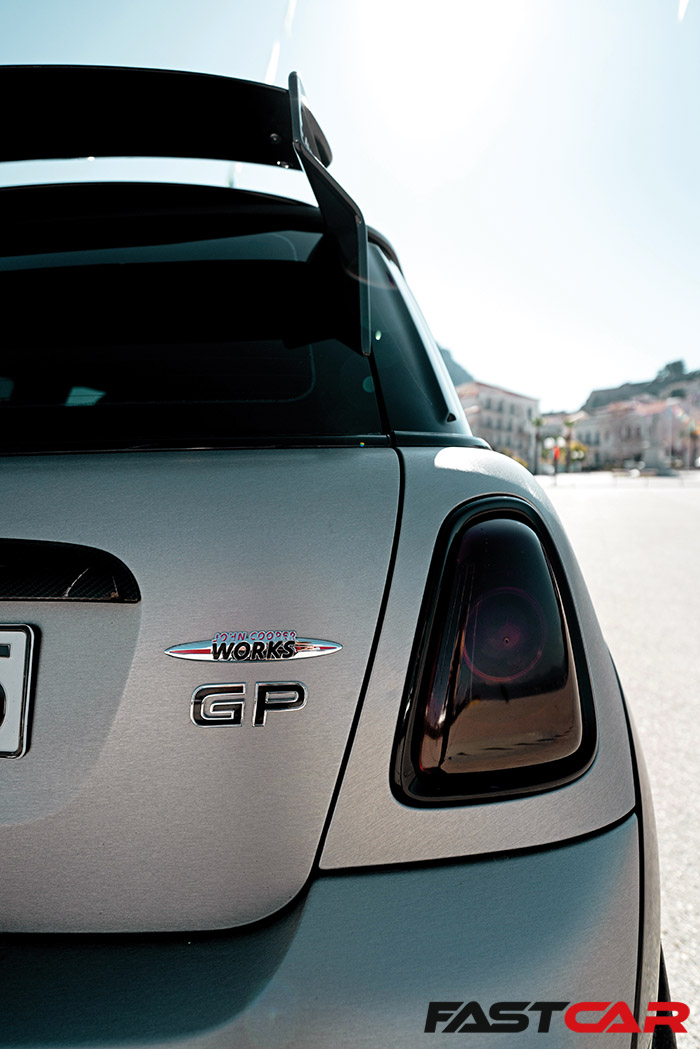