A penchant for the unusual has led this owner to create a modified Mini R52 Cabriolet brimming with personality.

Put a rare car and a rare mind together, and you’re guaranteed to get a unique result. Put self-confessed geek and tech boffin Eduardo Mendez together with a Hot orange R52, and the final outcome is this modified Mini R52. It’s a car that’s a standout showpiece oozing more Stateside cool than Bruce Springsteen riding a bald eagle into the Super Bowl belting out Born in the USA.

This cabriolet was always destined for a different path, as not only are they far from common in America, but you’re also more likely to see the New Jersey Devils (Eduardo’s home town) win a Stanley Cup than see another Hot orange Mini R52 Cab. Eduardo had always been into Minis since he saw The Italian Job movie, and when he spotted this one for sale, he had to have it. “The colour drew me in,” he admits, “but it was also completely standard with just 69,000 miles on the clock and zero rust, which is pretty special.” 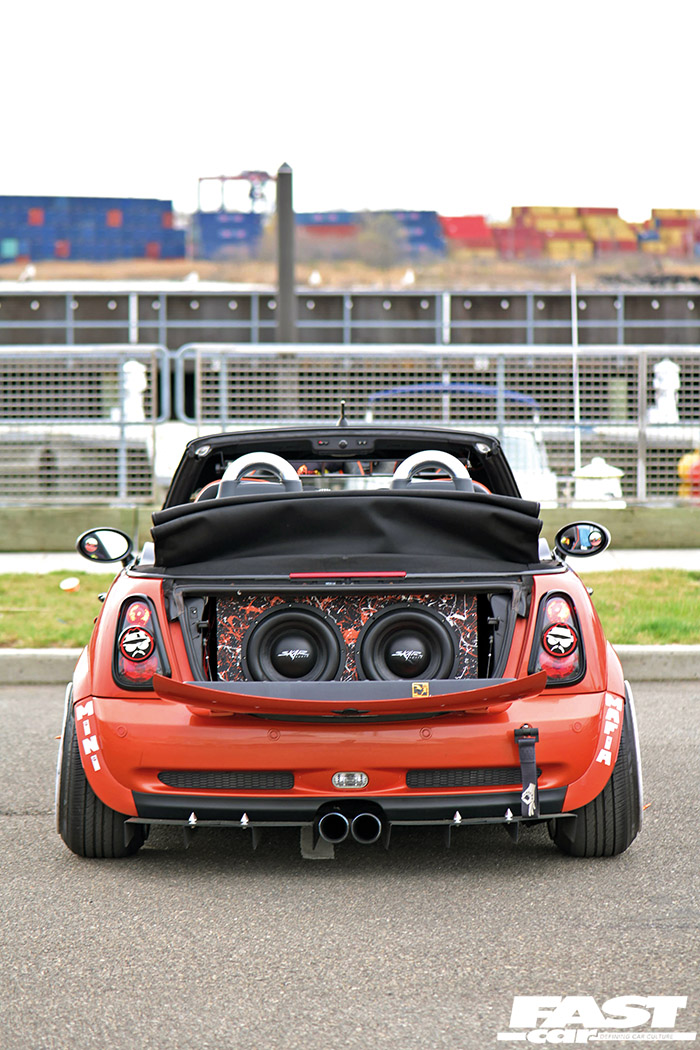 Unlike many of our feature car owners, there were no innocent intentions to keep the car standard. “I knew exactly what I was going to do,” continues Eduardo. “In my mind, I’d already built it before I even bought it!” And given that his other ride is a Honda CR-V with a 4” suspension lift and 31” tyres, this was never going to be a run-of-the-mill modified Gen 1. Eduardo knew that he wanted it loud in every way possible, from the looks to the engine and also when it came to in-car entertainment. After all, high-end hi-fi installations are a passion and profession for him, and he likes music while driving, so he decided to combine the two.

He began by stripping the rear seat out, to be replaced by a huge array of amps and speakers, which look like something out of Mad Max: Fury Road. Read the tech spec for full details, but in short, Eduardo has squeezed no less than 13 speakers into this pint-sized cabriolet and says the music is his favourite modification because it’s as loud as the car itself. 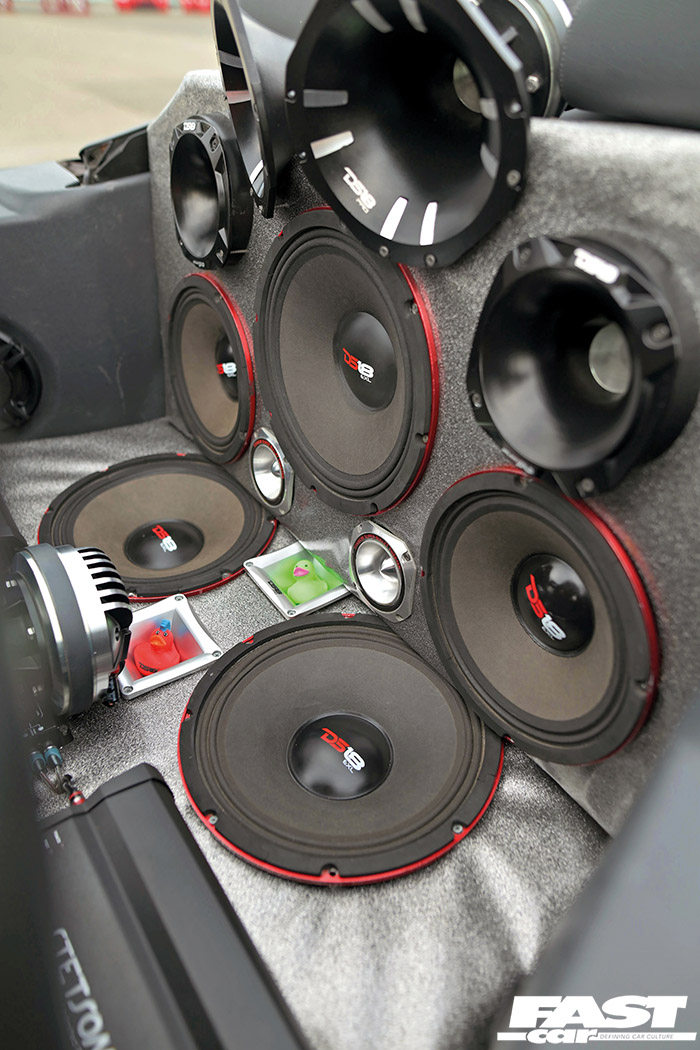 This is no small achievement, given that the engine now screams like a banshee thanks to the classic combo of 17% reduced supercharger pulley, larger top-mount intercooler, larger fuel injectors and a stainless manifold and exhaust system. What isn’t so common amongst the performance bolt-ons is a throttle body taken from a BMW 760. This is much larger in terms of internal diameter and has created some interesting dialogue on the NorthAmericanMotoring.com forums, including some quite technical testing by contributors who claim it results in another psi or two of boost at the engine. Eduardo reckons on a 260hp peak, which would be an impressive figure from the mods listed. One thing’s for sure – anything over 200hp in a slammed R52, with the wind buffeting your hair and no closed cockpit to quieten the supercharger noise, would be an amazing experience both for passengers and other road users alike. 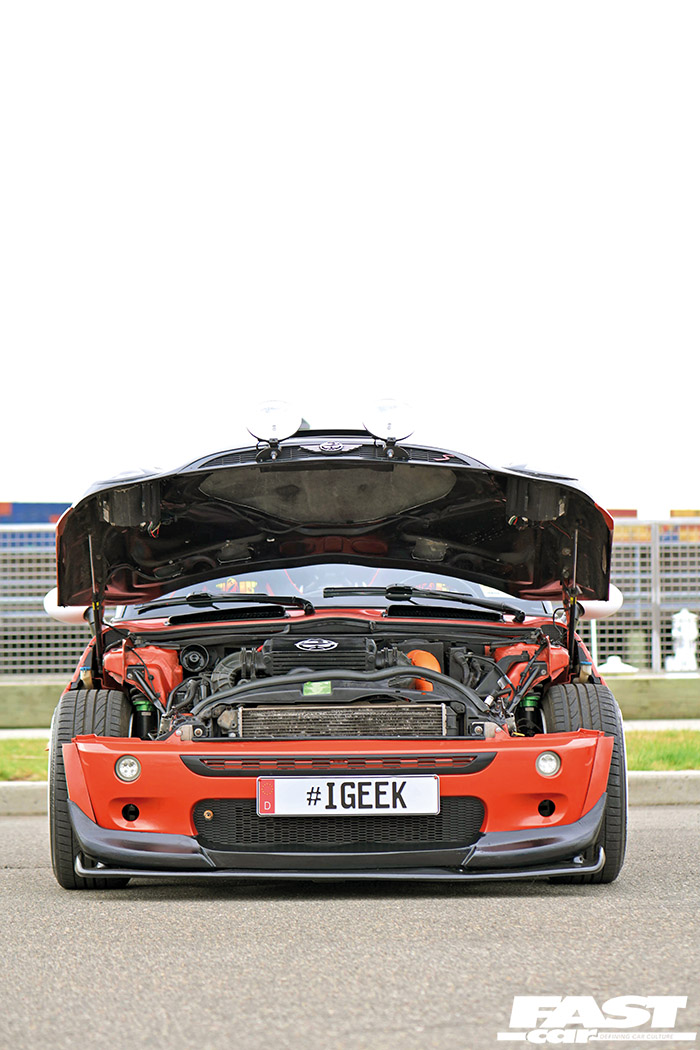 Indeed it’s no surprise that this modified Mini R52 turns heads wherever it goes, a wicked stance and loud colour scheme grabbing just as much attention as the decibels coming from the sound system and engine. The striking combination of orange and black really jumps out amongst the usual black and grey saloons navigating the New Jersey streets, and a subtle carbon weave on the bonnet pops in the East Coast sunshine. “I’m going further with the carbon too,” Eduardo chips in. “I’m going to get doors, fenders, and a trunk soon, they’ll match the hood and also tie the exterior in with the carbon I’ve already got in the interior.” And although it will in some way be a shame to lose even more of that rare Mini colour, the extra black carbon will contrast against the white 17” BBS rims even more than the Hot orange currently does. 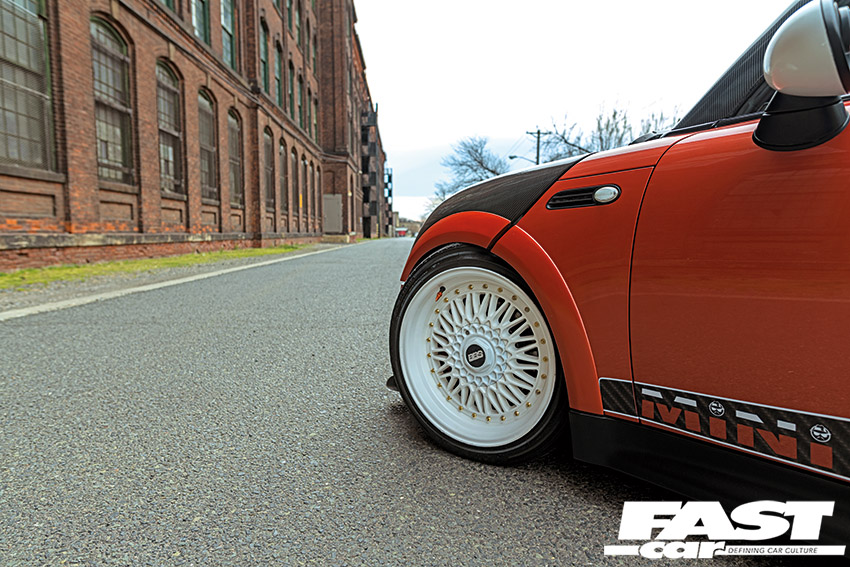 Ah, the wheels – genuine BBSs aren’t common on Minis on either side of the Atlantic, and even less so in such an aggressive fitment. Measuring 8.5”-wide up front and a hefty 10”-across at the rear, these white wonders are tucked right into the arches of this modified Mini R52 courtesy of a stack of camber and some serious slamming. M7 adjustable rear control arms take care of the former, while a lesser-known brand of coilovers takes care of the latter. “Hyper Streets are quite popular here,” says Eduardo, “for the price and the smooth ride they give, they’re actually rather good.” Okay, so he won’t be setting any records at the local Gymkhana event, but that’s absolutely not the point of this R52. It’s about blasting around, having fun, and generating smiles wherever it goes. 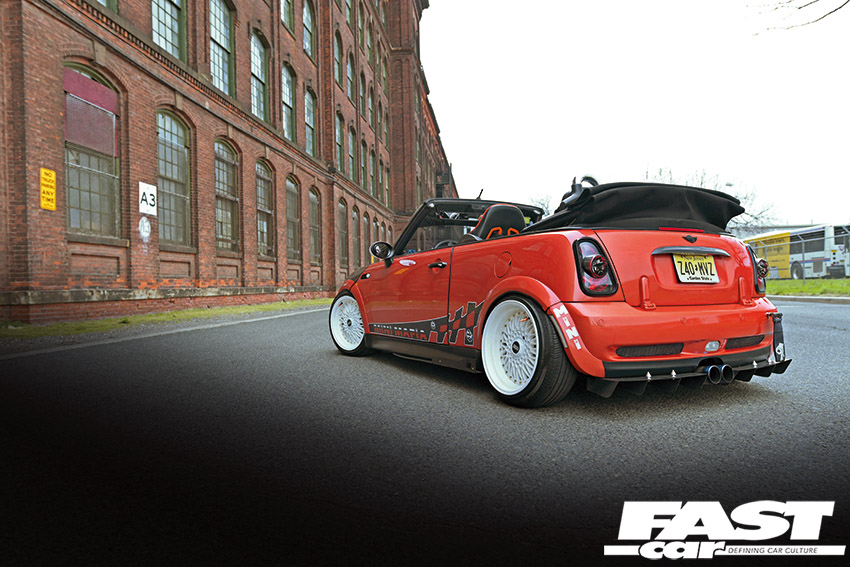 But this modified Mini R52 Cooper S is not just some bright clown show. Everything has been done to a very high standard, and the more you look at it, the more subtle touches and smart parts you see, which is always the sign of a cleverly and uniquely modified car. The colour-coded arches, the funky rear lights, the bonnet pins and retrimmed bucket seats… If there was ever an R52 to just take time to look at the pictures and geek out over, this is the one.