This awesome modified Mini R50 Race car is a 407whp turbocharged force to be reckoned with.

After cutting his teeth modifying Ford RS and Cosworth models while working for the Hendy Ford Rally Team, and having a Mk1 Fiesta as his first car, you might think Nigel Marsh was destined for modifying future fast blue-oval models. So why did this Ford fan end up owning and building this modified Mini R50 track car? Well, Nigel admits his admiration of the first-generation grew from running a garage (Engine Evolution), which specialises in them.

“Lots of customers started needing theirs fixing, some wanting them modified. I enjoyed the challenge and decided to make my own,” he tells us as we chat, and a damaged R50 Cooper Challenge car (check out our R50 buyer’s guide) quickly followed. “I used to work in a bodyshop, so we got it in and repaired it – or so we thought. Then, we tried to put a cage in it as I was going to build it – and the cage wouldn’t fit! It turns out the shell was a bit of a banana, and I ended up scrapping it,” Nigel explains. 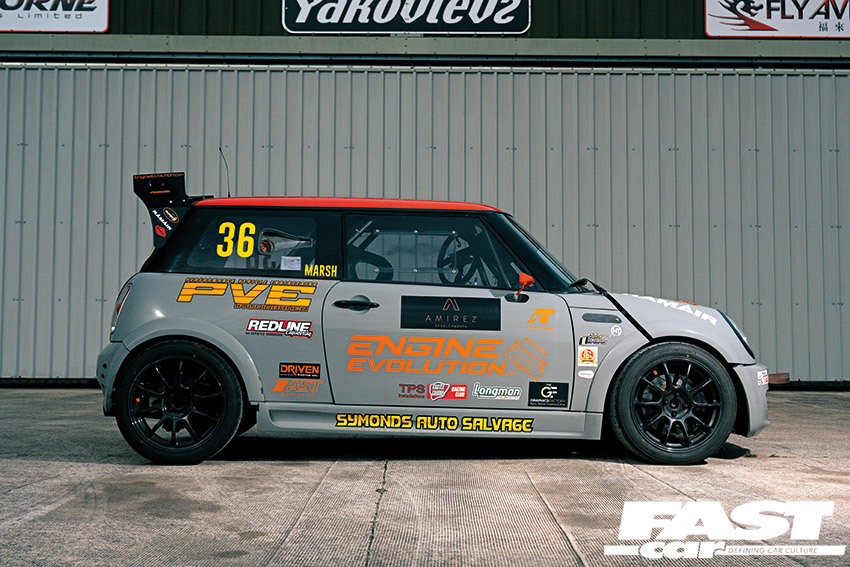 But that wasn’t the end of his and that Mini’s story, as Nigel then was on the lookout for another shell to transfer all the Challenge parts into. “I found this R50 shell on eBay from a breaker, I tried to buy the newest I could find – this was a 2005, and I started all over again!” It was a red non-sunroof shell, so he transferred all the parts over, and this Mini developed from there, although he admits that the ‘Challenge’ rocker cover is one of the few original parts that has remained.

Nigel’s modified Mini R50 track car was always built to participate in the Castle Combe Saloon Car Championship. So, as long as the car has forced induction it’s allowed to race. Although, if this car was going to be supercharged, Nigel knew he was going to come up against performance issues. “With a supercharger, you can only realistically get 250-270whp, but I wanted to build this Mini so it would make 400hp at the wheels. That’s what it does, I don’t need it to be any more powerful,” he smiles. So, Nigel’s Mini was always going to be turbocharged. 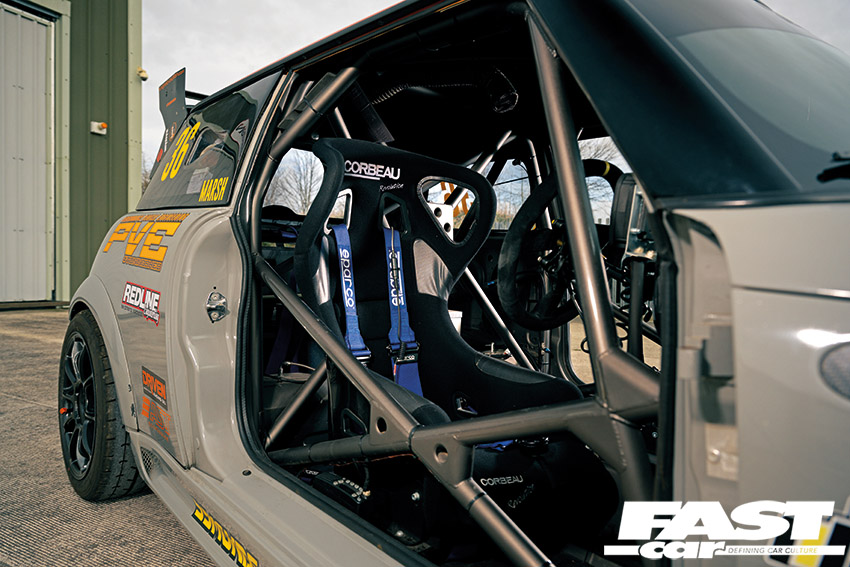 The first job was to dispatch the shell to Custom Cages to have an FIA-approved cage fitted, and it ended up taking five months for the job to be completed. Then it was time for a new coat of Skoda Steel Grey with a red roof, plus Aero kit and the Mini Challenge rear spoiler.

After talking to specialists, who weren’t keen to sell him the parts to make the turbo conversion, Nigel thought he’d do it himself. “I spoke to Dave King at JEK, who built the manifold, and I thought, you know what, he seemed to know what he was doing, so I went with him. He did all the manifold, the intercooler, the radiator and the oil cooler. We took the aluminium crash bar off the front, and it’s been replaced by a bespoke front end for it, so if I punt someone in a race, it won’t damage the radiator,” he explains. 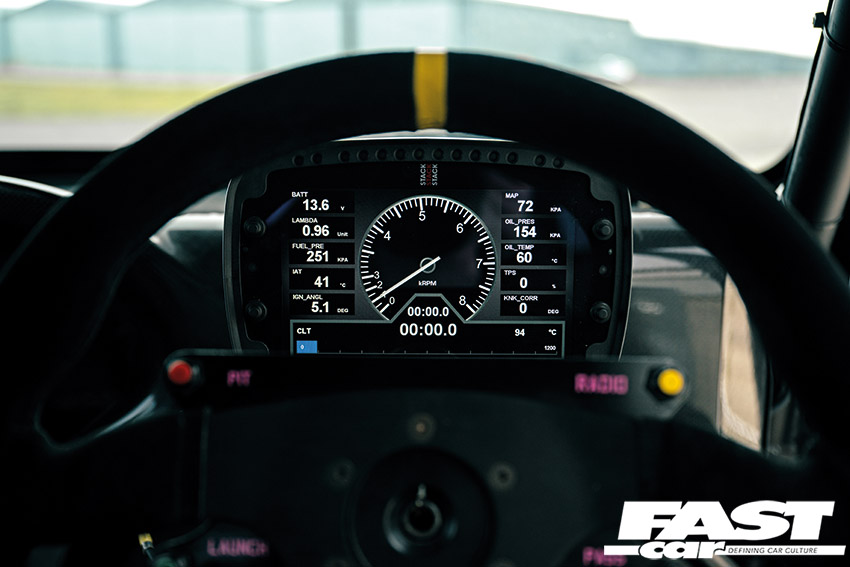 Elsewhere, the downpipe and exhaust system are from Mini Sport, in fact from Daniel Harper’s old Cooper S rally car. “That was bought eight or nine years ago when I had the Garrett GT28 turbo on the back. It made 327whp then, with that turbo on it and everyone said you can’t get more out of it, so I thought we had to put a bigger one on it!” However, a bigger turbo wouldn’t fit on the back of the engine, so that’s why it’s been mounted on the side.

Further turbo work saw Nigel upgrade that GT28 to a GT32, but there were more problems as that wasn’t really spooling up until 5000rpm. “It didn’t have the oomph to make it spool, then it would just come in with a massive clout, and that was pointless.” So, as the G25-550 turbo had just come out, Nigel got one and bolted it on. “It was so much better, it’s got good power delivery on it,” he smiles. 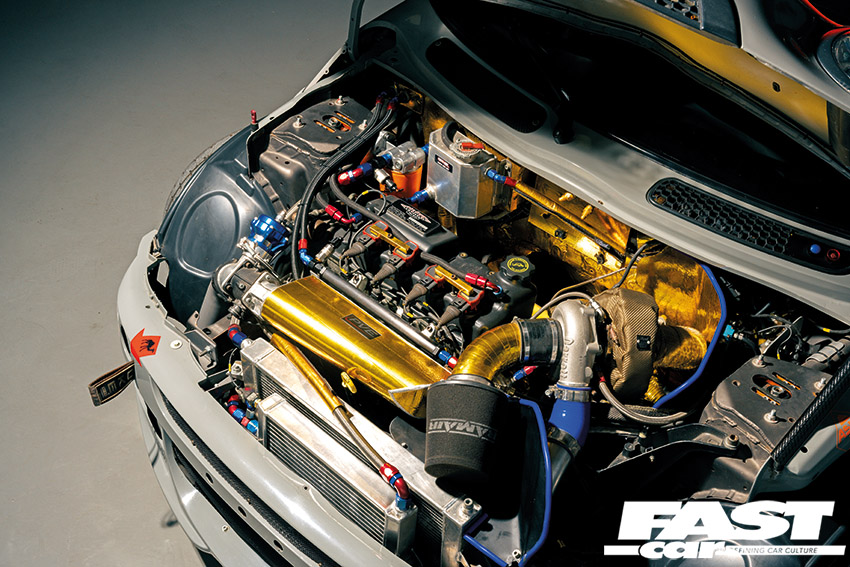 The engine itself was built by Brett Sims Motorsport and has a delicious race specification. It includes Carrillo rods and pistons, has a fully flowed and ported head with double springs and oversized valves, titanium valve-spring tops and collets, a Brett Sims race cam, a Revolution Motor Works inlet manifold, ASNU 1050cc injectors, Audi RS coil packs, a bespoke WOSP alternator and a lightweight clutch and flywheel.

Suspension came next, with Nigel fitting AST coilovers, DNA rose-jointed front arms, Mini Sport rear arms with R56 trailing arms that are fully rose-jointed and Roll Centre correction spacers. “These were all chosen as they suited the championship I was aiming to do,” Nigel explains. 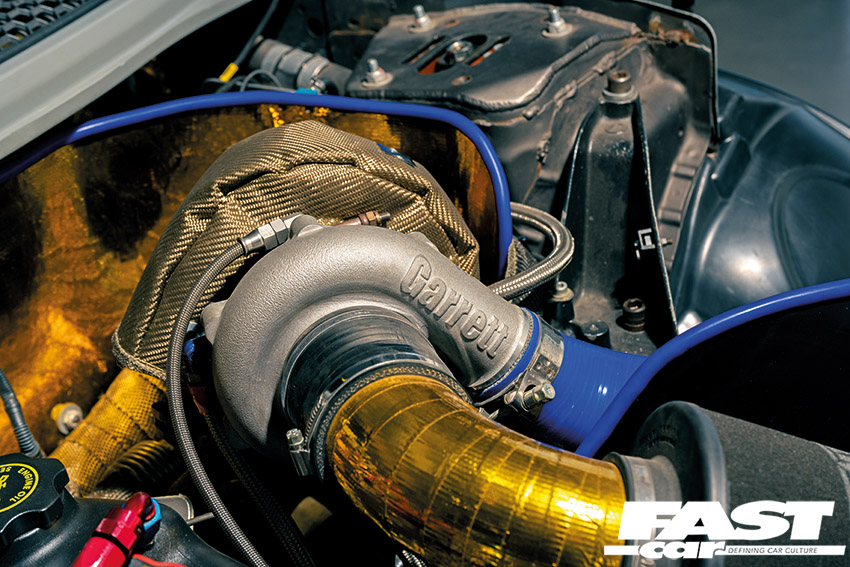 It was then time to focus on this Mini’s wiring. The bespoke wiring loom is the work of Longman Racing, well-known for its work on Classic Minis. The dash display is a Stack one, fitted in a bespoke dash panel that, like the exhaust, came from Mini Sport.

Braking is taken care of by HiSpec calipers at the front, the same as those on Mini Challenge cars, while the wheels on the Mini in the photos are forged aluminium Stuttgarts, so they’re very light and strong. Nigel also has sets of Rotas, Speedlines and Team Dynamics, which he uses for testing or as wets. 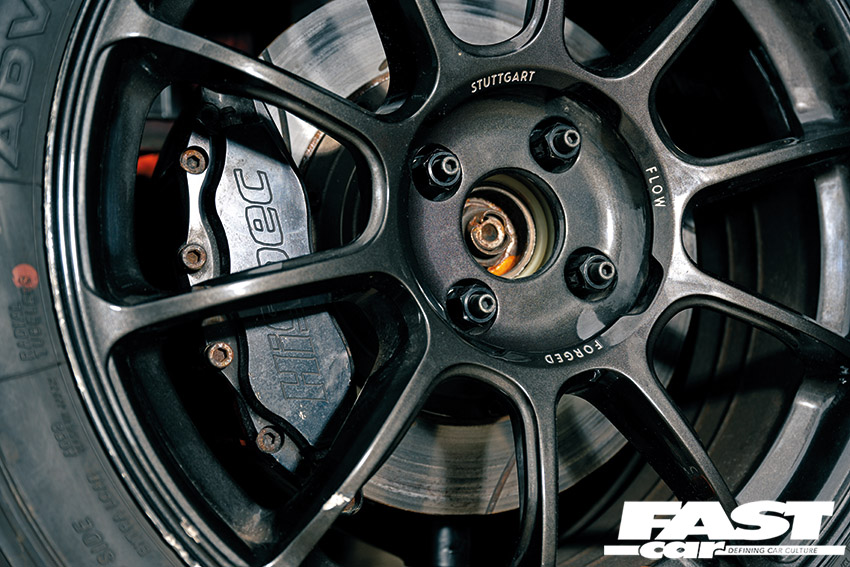 Altogether, Nigel reckons it has probably taken him eight years to get there, but he’s had some bad luck and a pandemic get in the way. “It actually took two to three years to build it, but I’ve just been really unlucky with circumstances. There was the time spent waiting for the cage to be fitted. Then when we went testing in it with the GT28 turbo, which is vacuum-controlled, the pipe fell off, and it went on full boost and totalled the engine! That’s another reason why they changed the MBE to a MaxxECU, as it had no boost protection.”

The plan this year is to finally go racing, but he admits 407whp might not now be enough. “The problem with that racing series is that when I started to build this car with 400whp, you’d be in the top five cars. Two years later, you now need 600whp! This is probably in the top 10 of cars, but, down the straights, you’re never going to keep up with them. Around the corners, it won’t be so bad, but I need more seat time in this car.” 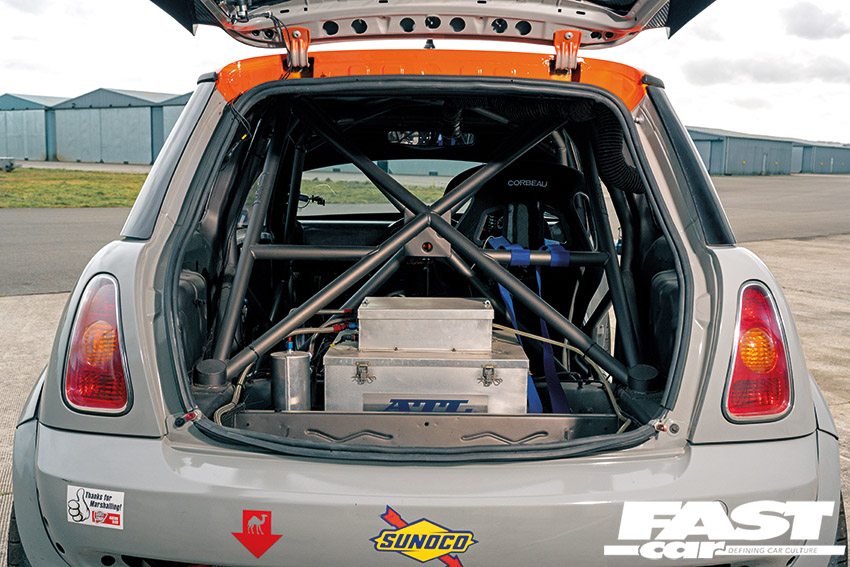 Nigel admits his priority now is building customers’ cars but thinks, if he needs it, he might fit a longer final drive ratio for more speed. “Elite Racing Transmissions, who did the gearbox, makes two final drives – a shorter one or a longer one – but it’s another £1500 to do! It’s good for another 20wph at the top, though, I would have thought.”

Tuners might not admit it, but as Nigel has proved, it is quite hard to get a genuine 400whp out of a modified Mini R50. But, Nigel’s turbo R50 race car doesn’t just talk the talk: with a proven 407whp, it can walk the walk, too. 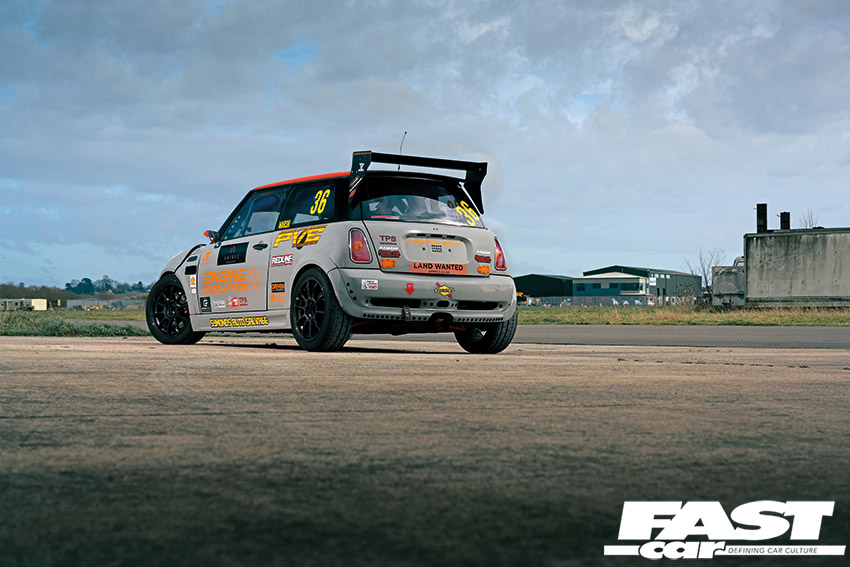