With over 300hp on tap, this turbo-swapped R53 Cooper S is one full-on modified Mini.

Opting for forced induction with the Cooper S R53 (check out our R53 buyer’s guide) was a big-brain play by Mini. It meant a small engine could output a decent amount of power without having to be a high-revving unit, along with plenty of torque, and choosing supercharging over a turbo made it a unique offering among its rivals. Naturally, factory forced induction also meant that when it came to extracting more performance from the 1.6-litre four-pot, options were plentiful, and gains were impressive. However, while superchargers are great at delivering lag-free power and the Mini’s positive displacement setup serves up a lovely spread of torque, if you’re hunting for really big numbers then turbos rule the roost. That’s why, when you lift the bonnet of Oliver Aitken’s R53 you will find a snail in place of a supercharger, and this homebrew build is serving up some serious boost.

“I’ve been interested in Minis for about five years,” Oli begins as we chat, which is, funnily enough, how long he’s owned his Cooper S. “I’ve always been particularly interested in the R50/R53 first generation of BMW Minis as my parents had one from new. I only really noticed them when a couple of mates of mine had some and when I realised the R53s were very cheap, I saw my opportunity to own one and got this one for £1300,” he smiles. “I decided to get one because I kind of knew the R53 was a unique and solid platform for an enjoyable hot hatch. It wasn’t until I got one that I realised its true potential,” Oli grins. “The models have aged very well and still stand up considering some are 20 years old now. The engine is over-engineered and can easily push double its factory output with the right mods. The car handles very well when standard, too,” he adds, and those are just some of the reasons why we love Minis. 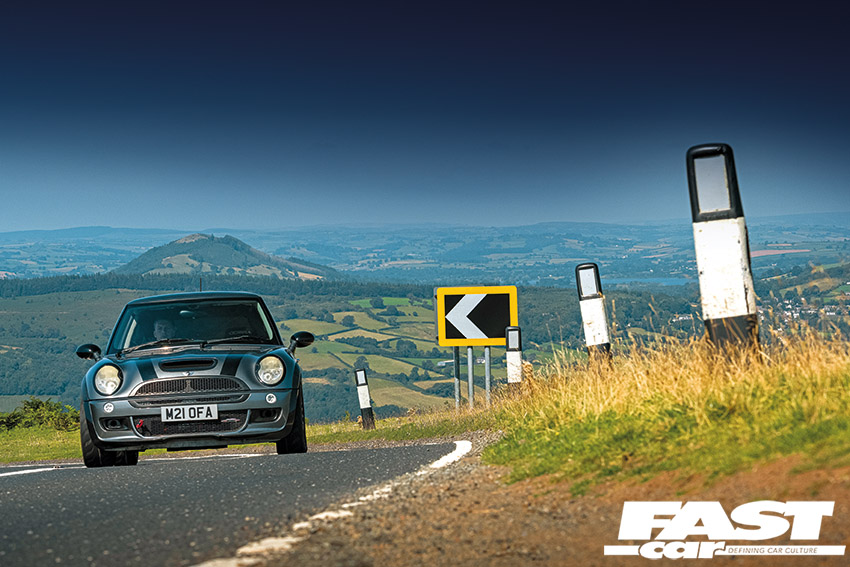 While Oli has owned and modded a selection of cars before acquiring his Cooper S (his first car was a Polo that he dropped on some coilovers) when he picked up his bargain R53 he certainly had no idea that it was going to become a serious project. “I didn’t really have any plans, just coilovers and wheels I guess – I definitely didn’t think it would end up this far,” he laughs, but that’s all part of the modding journey.

Oli wasted no time in getting stuck into the mods, opting for a set of BC Racing coilovers for their adjustable damping and ride height and fitting them on his first night with the car, and then he got into the performance upgrades. “Firstly, back when it was supercharged, I did all the bolt-on mods, starting with a 17% pulley. I knew the easiest way to increase performance out of my R53 was to reduce the ’charger pulley and wanted to see what all the hype was about. I did that, and the car didn’t seem to be any better. After a bit of head-scratching I realised the bypass valve was broken and stuck wide open,” he laughs. “I fitted a new one from 1320 Mini and, wow, what a difference! The next addition was an Airtec top-mount intercooler and a Newman Phase 2 camshaft. This cam was chosen for its top-end punch, which was great for a drop-in cam,” Oli enthuses. 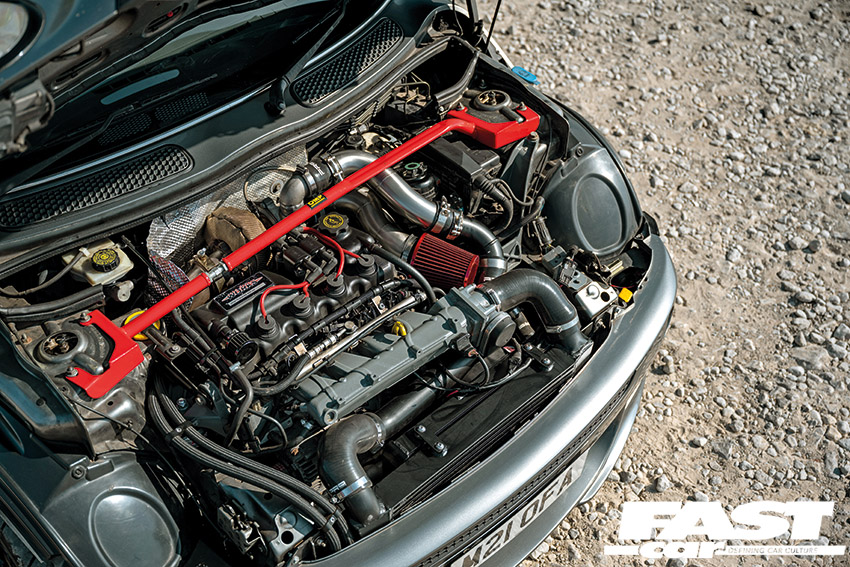 “After this was the Pro-werx ported and polished cylinder head as I knew the exhaust ports were very restrictive on this engine, and then the earlier gearbox was swapped for a BKL facelift gearbox for the limited-slip differential with shorter ratios (well worth the money). Finally came tuning at 1320 Mini along with some Bosch 550cc injectors, and the car left with 230hp,” says Oli, and that’s a healthy number, but he’d got a taste for power, and he wanted more. “Despite the 230hp I still wanted more grunt, and after seeing all the turbo R53s I knew that was the only way to go if I wanted some big power and serious performance…,” he grins, and so Oli and his dad got stuck into the turbo build, which would take them a year to complete.

“I bought a supposed ‘turbo kit’ off Facebook and pieced together all of the missing items. The kit I bought consisted of a Garrett GT2871R turbo, 3” downpipe, top-mount ABF manifold, GRS intercooler and pipework and a couple of bits and bobs, the basics,” says Oli. “The engine came out, I sold all the supercharger parts and then began fitting the manifold, turbo and auxiliaries. It could have stayed in but was easier for some of the more tricky jobs,” he explains. “Luckily, I had someone who lived close by that could do some alloy welding for the sump oil return, oil feed and inlet throttle body plate. One of my good mates refreshed all the bottom end bearings and fitted the APR rod bolts on the engine while I was at work. Top bloke,” he grins. “I used the Cooper water pump, alternator tensioner and belt system for reliability, and once the engine was back in and starting on the key, I opted for a full Airtec front-mount intercooler and rad package that fitted nicely and was a great addition to the build,” Oli says. 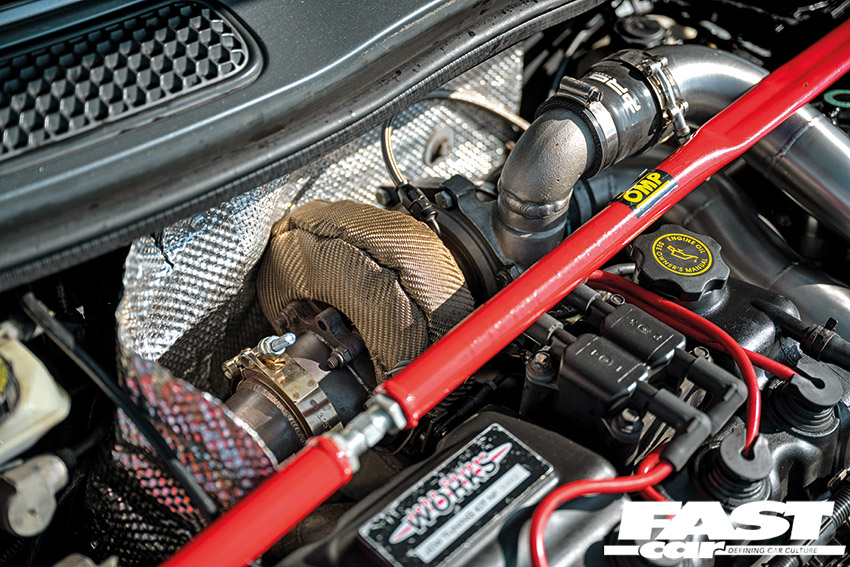 “When it came to mapping, I was set on getting the Cooper S tuned back to 1320 Mini, but I realised St Neots was just too far and expensive to get the car trailered there, so I started looking around for somewhere a little closer to home. I noticed a company in Somerset called PV Engineering that had a compound ’charged R53, which seemed like madness, so I figured they were the right people for the job,” Oli smiles.

“Talking to the guys at PV Engineering It was decided I should go for a Link G4 ECU as the stock ECU would start to struggle and limit power, and a MAC 3 bar map sensor was used for boost control. The car left PV Engineering with 307hp and 251lb ft of torque, with the outputs capped for safety due to the 550cc injectors. Hopefully, I’ll be back next year for some 1000ccs and 340hp+. But for now, it’s plenty!” he laughs. “The drive home was immense, considering I had been driving a 50hp Skoda for the past year! The car has been completely transformed and makes all the right noises,” grins Oli, and we totally get where that grin is coming from. A lot of work has gone into this conversion, and a lot of time too, but the end result was absolutely worth the wait, and even if it’s not reached its full potential just yet, Oli is over the moon with his turbocharged Mini monster.

While the engine dominates this build, Oli has not neglected the rest of his Cooper S, and this is very much a complete build. The BC Racing coilovers have sorted out the handling and the stance, but with Oli less than impressed with the stock brakes, these have been upgraded with a set of R56 JCW Brembo front calipers along with Ferodo discs and pads plus braided lines. The Advanti Racing wheels weren’t really chosen, Oli found them for £100 on Facebook Marketplace and deemed them too much of a bargain to pass up. That they suit the look of the build perfectly is a bonus, but what matters is that he’s wrapped them in Toyo R888R rubber. 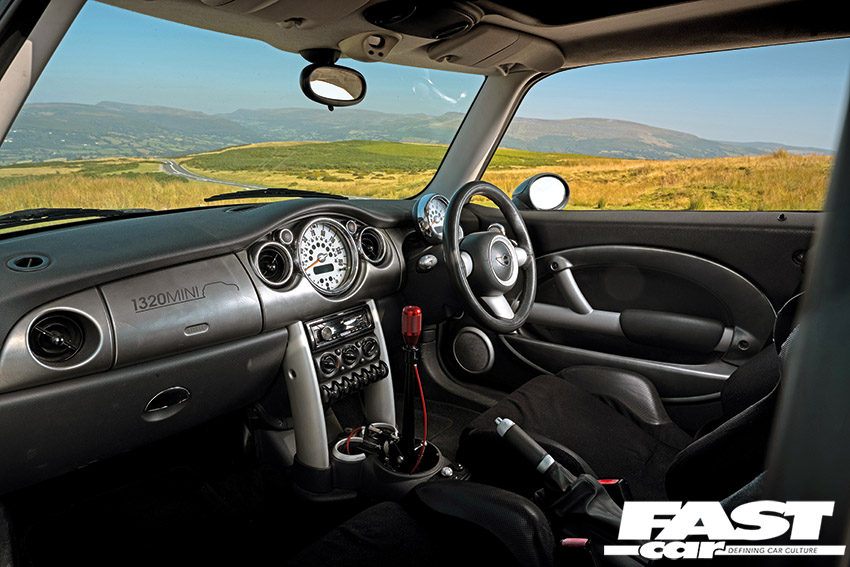 In terms of styling, this modified Mini Cooper S R53 has been given a few tweaks, but Oli was keen not to go too far. “I wanted the modifications to be very subtle, just to look like a standard JCW 210, really. It’s nice to see the look on people’s faces when it moves and makes turbo noises,” he laughs. This Cooper S has been treated to Aero bumpers front and rear along with Aero grilles, angel eye sidelights and a GP rear wing, and these additions have given it a little more presence without going overboard. On the inside, meanwhile, Oli has added a pair of extremely sexy Cobra recliner bucket seats, and they are the only seats you will find in the car as the rears have been removed. The battery has been relocated to the boot to aid with weight distribution, there’s a Coolerworx short-shifter with a red gear knob, and the finishing touch is a boost gauge to the right of the rev counter.

This modified Mini Cooper S R53 is an extremely impressive build for so many reasons. There’s the fact that this is Oli’s first Mini, so he’s set the bar pretty high, and the fact that almost everything was done by him and his dad in the family garage, which makes the end result all the more satisfying. And what an end result that is. Over 300 turbocharged horsepower wrapped up in a subtle-looking R53 body with just the right amount of key upgrades inside, outside and underneath make this both an incredibly fun and potent performance hatch. When Oli fits a set of 1000cc injectors next year and cranks the power up to 340hp the project will be truly complete, but there’s no rush – his main priority is to enjoy the fruits of his labours, and we bet they taste pretty sweet. 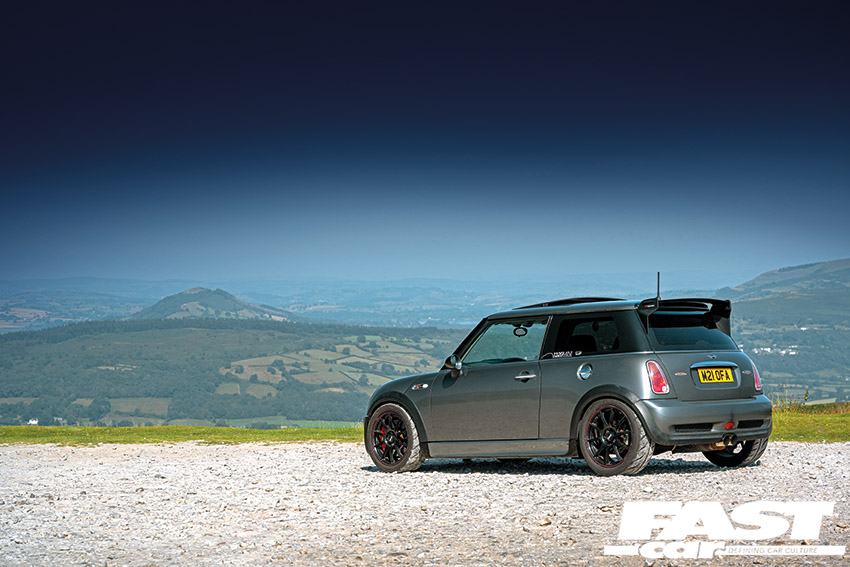