What was once a family-friendly estate has been turned into a hardcore performance build with attitude to spare; this modified Mini Clubman R55 Laurel Sport Edition is a seriously special machine.

Every Mini has a role to play, each one has a purpose and each one has its own army of dedicated fans. Take the Mini Clubman, for example, and the quirky R55 in particular. Longer, with more rear legroom, a bigger boot and that funky rear passenger door, it was a modern take on the classic Mini estate (once called the Traveller, or funnily enough, the Countryman), one that offered greater practicality for those who didn’t want to ditch Mini but needed a little more room.

It was this added family-friendly appeal that drew William Tisnes to his rather special modified Mini Clubman R55 for exactly those reasons. It’s fair to say that his R55 is rather less friendly and rather more ferocious these days, though, but it hasn’t lost any of its added practicality in the process of being transformed into a full-on performance build. 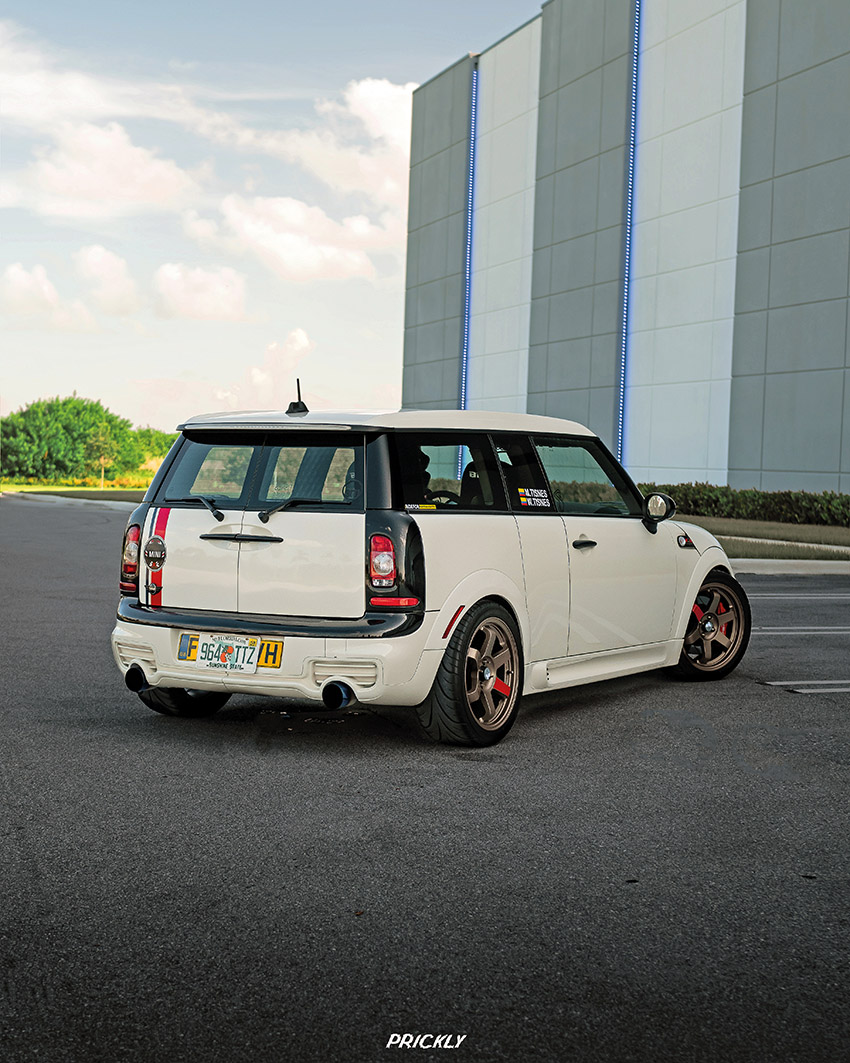 Residing in the USA, William’s list of previous cars includes a selection of exactly the sort of vehicles you’d assume an American car guy would own. Starting with his first car, a 1983 Chevy Monte Carlo, there was also a 1993 Mustang 5.0 drag/street car, and a 1995 Ford Ranger Splash pickup truck show build. So far, so yeeha, but Minis, have been on his radar for some time now.

“I have been interested in Minis since 1996 when my former boss went to the UK for a vacation and brought back a Mini magazine which I still have to this day. Back then, only the Austin Minis were available and to get one imported into the States was very difficult. Fast forward to 2015, and my neighbour, who had previously owned a modified R53, reignited my interest to begin my search for an R body,” he explains.

So the search was on, and it led William to this Mini R55 Clubman Cooper S Laurel Sport Edition via a Tampa, Florida used car dealership. “I was looking for a Mini the whole family could fit in. I had no clue what I had just bought and what I had in my hand until I did some research and realised how special it was. The car looked nice, and I knew I could make it nicer,” he grins. 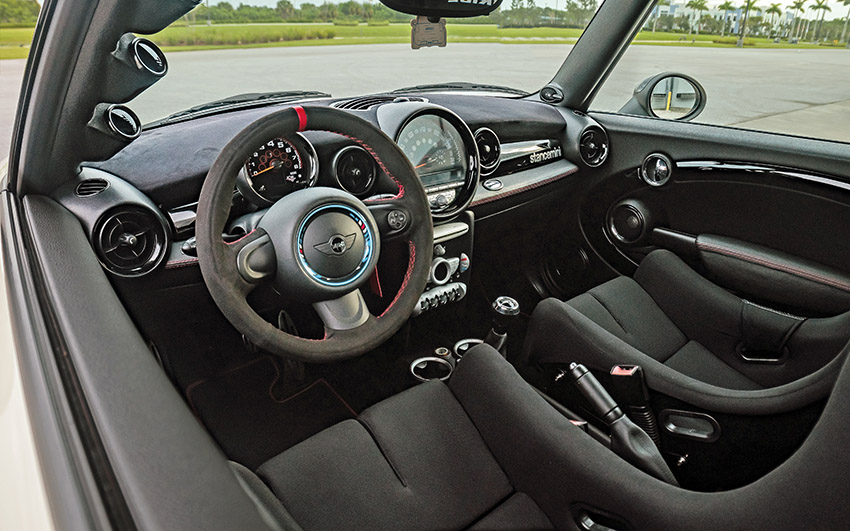 At this point, we need to explain just what makes this particular Clubman so special. Launched in 2010, the limited-edition Laurel Sport models were exclusive to the US market and they really were exclusive.

Each dealer received one each of the three available body styles (R55, R56 and R57) and just 100 cars per model were produced in total. All Laurel Sports were finished in Pepper white with unique stripes and featured black 17s, the JCW Aero Kit, and black details. With just 100 R55s produced, the chances of finding a used Laurel Sport Clubman were very slim, so William definitely got lucky with his purchase.

But the story most definitely does not end there because, as William himself has already said and as you can plainly see, this Clubman R55 is now even more special than when it first emerged from the Mini dealership some 12 years ago. Family-friendly and practical it may be, and that may have been the draw, but with a history of modifying, this Clubman was not going to be staying stock for very long at all while under William’s ownership. 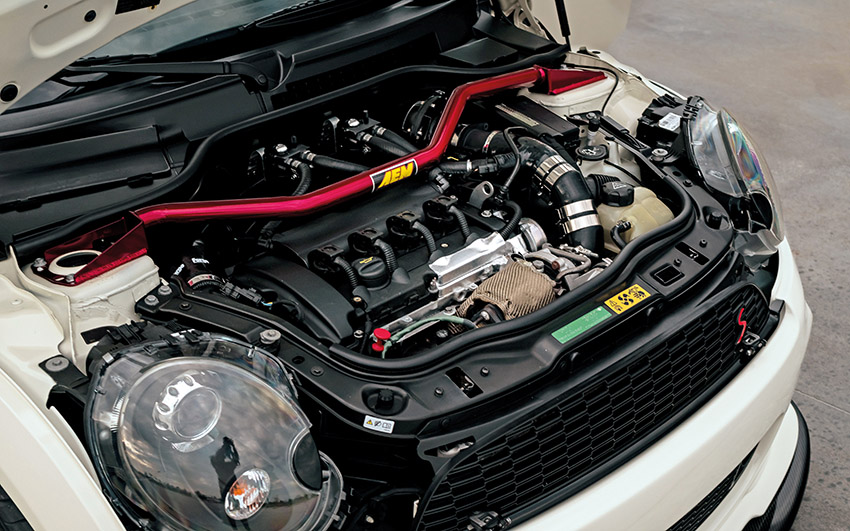 Things began with some aesthetic enhancement – the R55 looks good in Laurel Sport trim but not quite good enough if you’re keen on modified cars, and there’s always room for improvement. For William that began with a little bit of lowering, which is taken care of by a set of Eibach springs and which gets this Clubman sitting perfectly and delete all of that nasty stock arch gap.

With his goal being to get the car set up for the track, in addition to that, he has added a set of uprated Eibach anti-roll bars front and rear to dial out unwanted body roll, while an AEM strut tower brace helps to keep things nice and stiff, and all that means this Clubman extremely capable when it comes to having fun on track. 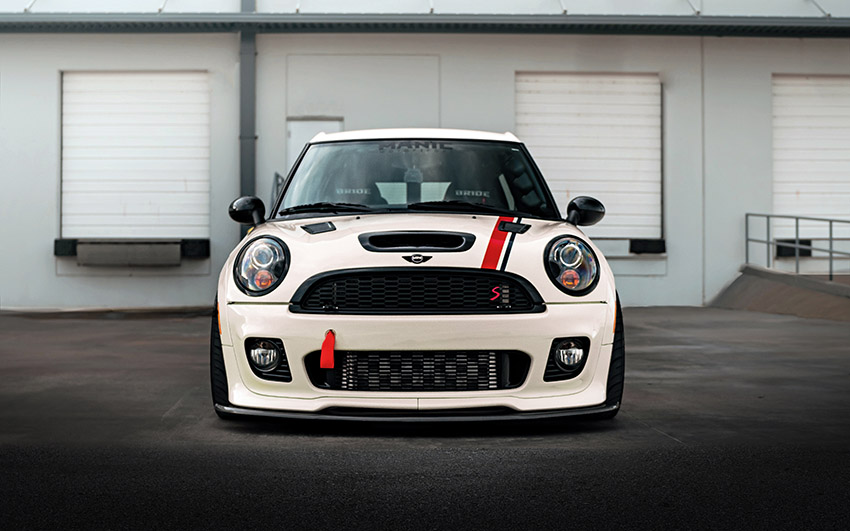 If you lower your car then you need to make sure you’ve got the right wheels to go with that drop, and the stock 17s that the Laurel Sport came with just weren’t going to cut it for William. “I considered BBS LMs at first, but after seeing the Avid1 AV6s on another Mini, I thought they looked great and were lightweight too, so I went for them,” he smiles, and they were an inspired choice.

Looking like the legendary Volk TE37s, the bronze Avid 17s, wrapped in super-sticky and track-friendly Federal 595 RS-R rubber, are perfect on the Pepper white Clubman. The aggressive fitment sees them poking just a touch past the arches for a stocky aggressive stance, while the red spoke details tie in perfectly with the red Laurel Edition elements in the stripes and side repeater trims.

They also match the red towing strap that William has added to the front bumper, and the styling is further enhanced by the addition of several elements that William has chosen, inspired by the Mini Challenge cars. These include a custom carbon front splitter that endows this Mini with an extra helping of aggression, and that’s further aided by the Mk3 Ford Focus bonnet vents that have been added. 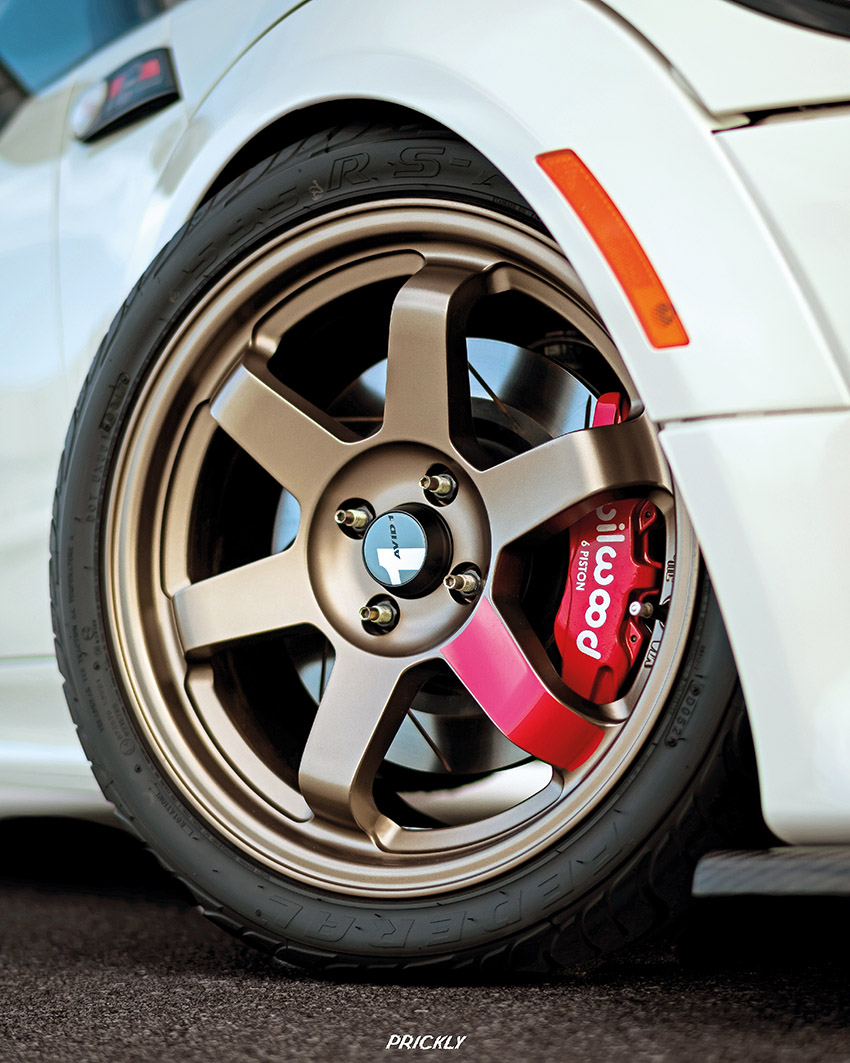 At this stage, William had put together a very smart-looking Mini, and it was absolutely one he could be proud of, but the surface of this build had only just been scratched, and now things were about to get serious. “What was going to be a simple ported and polished head and upgraded turbo turned out to be a full engine rebuild,” he explains.

“After getting back the head from the machine shop, I began to put the motor together, but, when torquing down the head, the worst possible thing happened,” William grimaces. “The head bolt snapped 2” below the block height. I had to remove the whole engine and take it to the machine shop to get the bolt removed. However, the machine shop could not remove the head bolt from the block, so that led me to buy a rebuilt short block overbored by .50. The motor was fitted with an all-new timing chain and ARP head studs for strength,” he says. 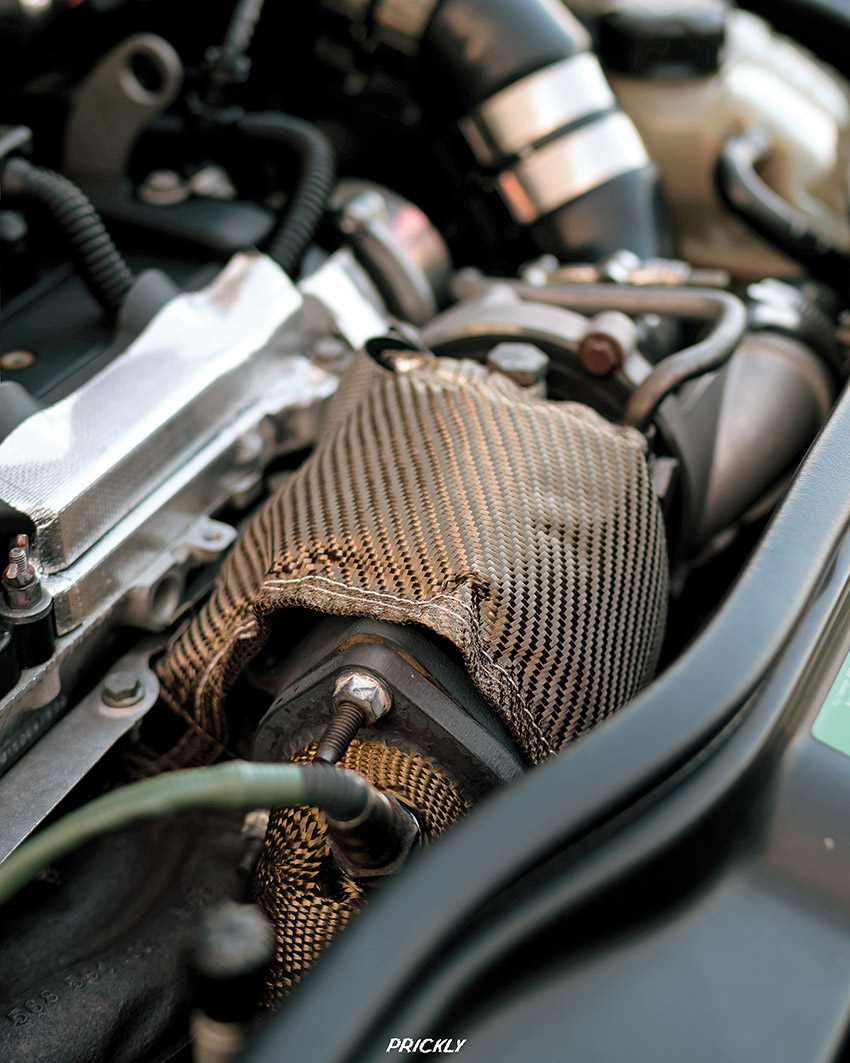 That was certainly a nightmare situation that no one would ever want to find themselves in, but as well know, if something breaks, that just gives us an excuse to improve things while we’re fixing them. The N14 under the bonnet of this Clubman now boasts a custom 51mm K04 turbo from Turbo Lab of America along with a Turbosmart blow-off valve and a custom K&N air intake. There’s also a custom exhaust with fat, flame-burnt tips, a Helix uprated intercooler, dual catch cans and a Manic Stage 3 tune by Lou at Prototype-R.

The result of all those upgrades is a hefty 298hp along with 334lb ft of torque, which make this into one rapid modified Mini Clubman R55. To help put all that power to the tarmac, William has fitted a JCW LSD transmission, along with a Spec Stage 3 six-puck clutch, and it’s his favourite modification on the whole car. “It completely changed the way the car drives,” he enthuses, and, as they say, power is nothing without control. 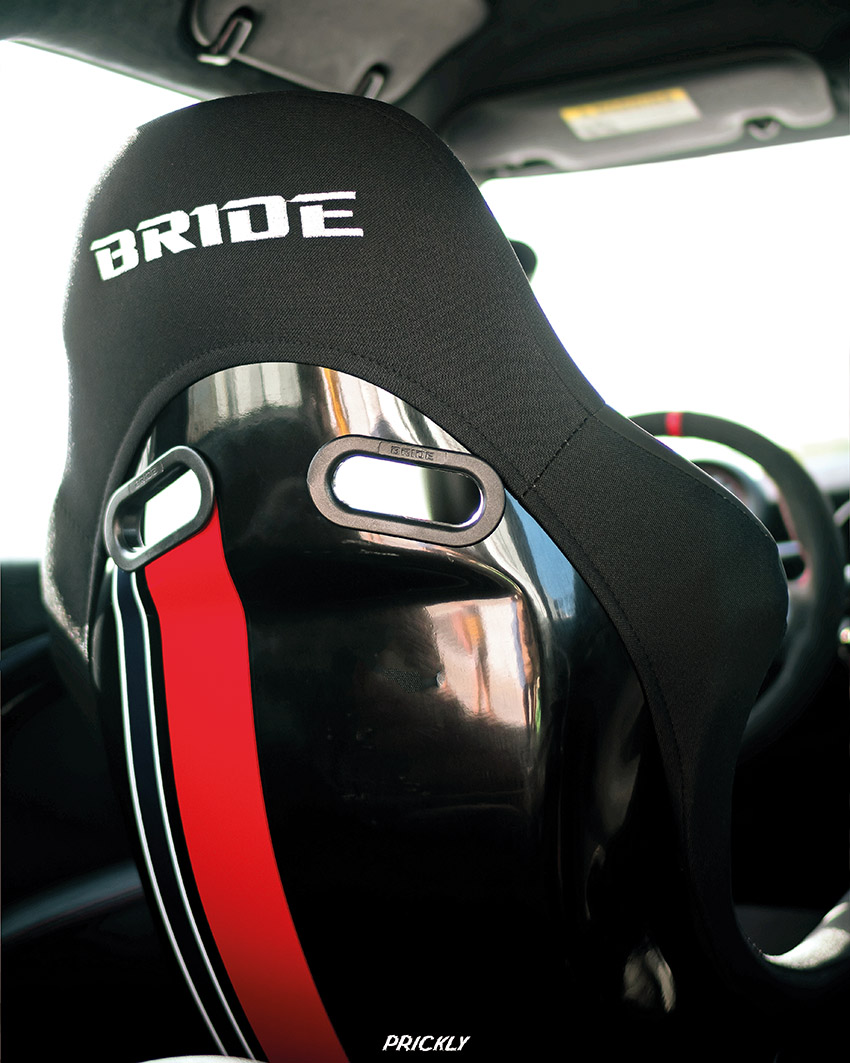 Finally, we come to the interior, and with William’s enthusiasm for track days having already steered certain areas of the build, it’s no surprise to learn what direction he’s taken the cabin in. “I have always liked the R56 JCW GP interior with race-inspired elements,” he says, and so his R55 definitely has the air of a road-going racer about it.

Taking pride of place are the Bride racing buckets, and then you’ve got the custom suede headlining and suede dash, which combine to give this interior that racing feel. There’s a seriously sexy suede-rimmed steering wheel with red stitching and a red centre stripe, and this is complemented by the custom black leather dash and door panel coverings that are finished with red stitching. The finishing touches are the custom triple A-pillar gauge pod and the JCW speedo and rev counter overlays in kph. 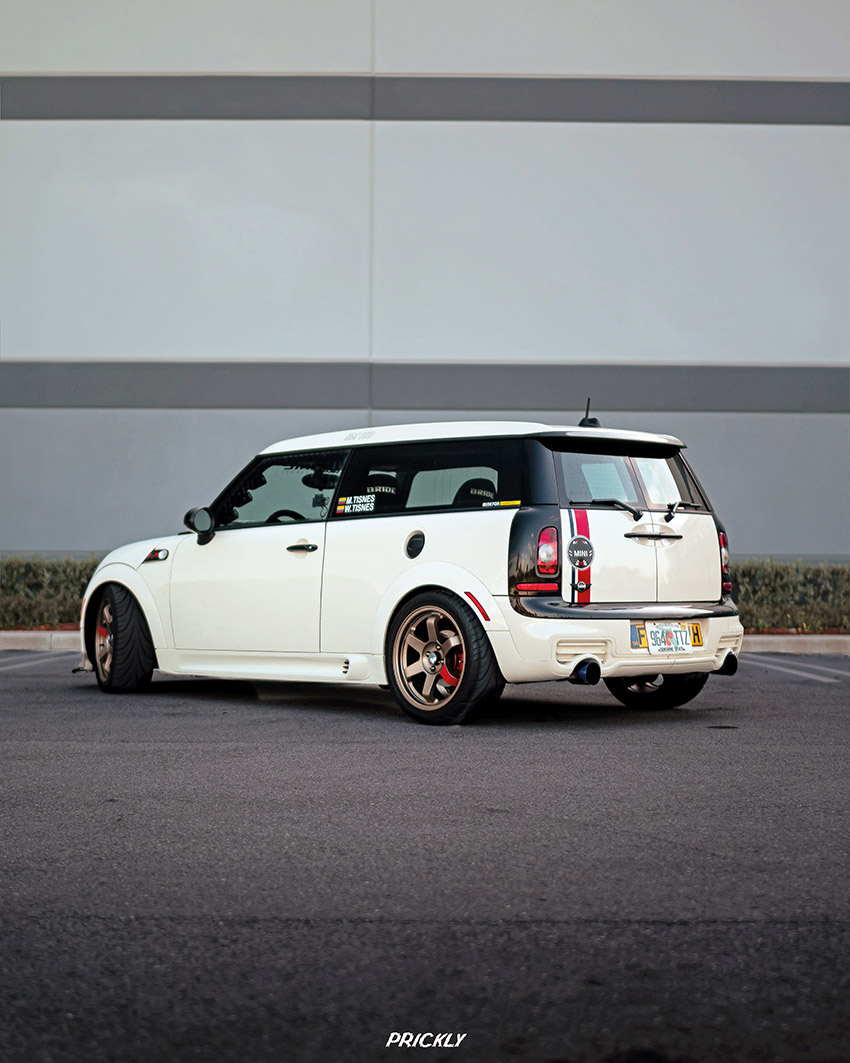 William has built himself an incredibly impressive and comprehensive Mini, and his Clubman really is a force to be reckoned with.

This is such a complete build. It really delivers in terms of power, style, and driving pleasure, while still remaining a practical prospect for those days when William wants to bring the family along for the ride. And while some owners would want to keep a limited-edition Mini stock, we like the fact that, for William, it was always about making it the best car it could be. The Clubman might not be for everyone, but this modified Mini Clubman R55 is so good it’s enough to make you want kids just so you have an excuse to buy one.