Some people will tell you that the Honda Civic Type R Ek9 shouldn’t be modified. But with a little imagination, a thirst for power, and a keenness to do things properly, you can find the confidence to bring the performance screaming into the 21st century.

There’s something about the Civic Type R EK9 (check out our EK9 tuning guide)  that can’t help but ensnare enthusiasts like sailors to Siren-infested rocks. “It was one of the original hot hatches, something just drew me to it,” confirms David Taylor, owner of the magnificent example you see artfully splayed below. “Even on video games when you had access to all these other wonderful cars, nope, for some reason I’d always end up buying the EK9!”

It’s easy to explain the appeal of this iconic model to British fans of a certain age; as the hot hatch wars raged across the forecourts in the 1990s, we were denied the full-fat Honda Civic Type R EK9. Sure, we had the VTi, which brought howling VTEC thrills to the UK modding scene and proved in one fell swoop that Japanese engines offered a whole new realm of tuning possibilities. As standard, you got manic acceleration, half-leather seats and, on the five-door, a limited-slip differential. But the Type R was what we really wanted – it’s the legend, the unicorn: made solely for the Japanese market, it was a hatchback-only model with a manual ’box and an LSD, along with that rev-happy B16B VTEC motor. Based on the EK4 Si-R, the EK9 Type R enjoyed further chassis reinforcement, quicker steering, bigger brakes, had lots of weight stripped out, and a hand-polished cylinder head. It was pre-modified in showroom form. 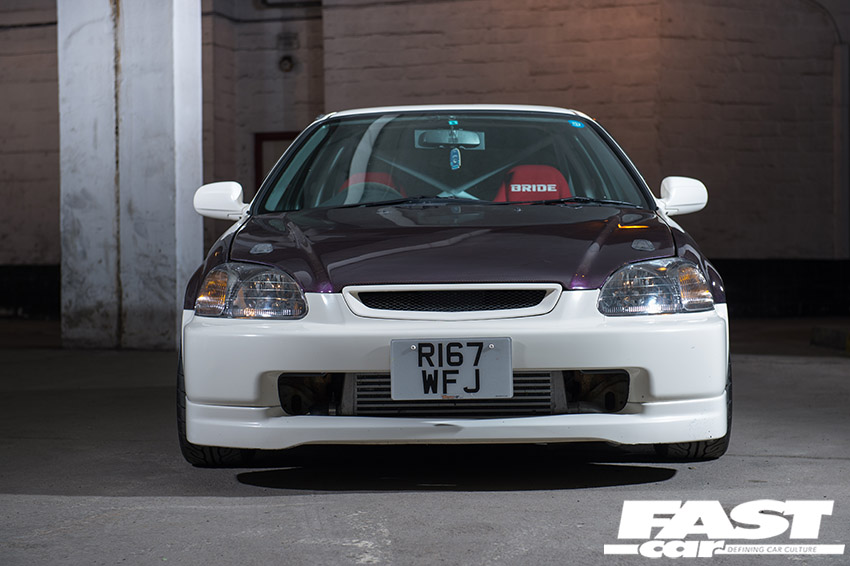 Perhaps understandably, David’s original intention when he bought this EK9 Civic Type R was to keep it stock and enjoy it purely for what it was. We hear this a lot. It’s a fleeting fancy and it doesn’t last long. “It was already lightly modified when I bought it,” he reasons, “and the part of me that said it was ‘pure’ was soon defeated! A friend had a K20’d EK9, another had a B18’d one, so it didn’t take long for the extra mods to start roll in.” He says.

“I’m the first owner of this modified Honda Civic Type R EK9 in the UK,” he continues. “I won it at auction back in November 2011, and imported it via Torque GT. I picked it up the following January after driving down to Torque GT in Buckfastleigh from Aberdeen in my old Fiesta, which I traded in. The Civic was a grade 4 at auction – there were a few little marks on the passenger-side quarter above the wheel arch, some scores in the rear window, and a scuff on the front bumper, but other than that it was pretty much perfect.” 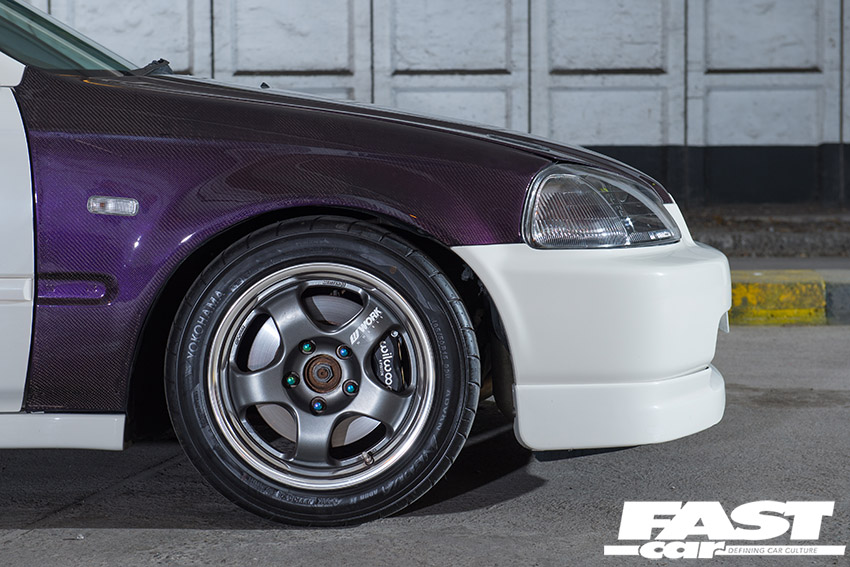 This is what Torque GT do day-in-day-out, they only supply cars they’d be happy to own themselves, so after an exhaustive four-month search they found the perfect car for this discerning enthusiast. The pristine EK came mildly warmed-over with an unknown aftermarket manifold, Jasma sport cat and Mugen Twin-Loop exhaust, along with a funky dial overlay that made them glow neon blue. It also had some horrendous aftermarket taillights, but thankfully the stock ones were in the boot and were swapped on straight away!

Those itchy modding fingers soon saw a carbon bonnet arrive, followed by a set of coilovers after plenty of ribbing from mates about his 4×4 stance, then bucket seats and harnesses… and then a twist of fate saw the project spear off in an unexpected new direction. 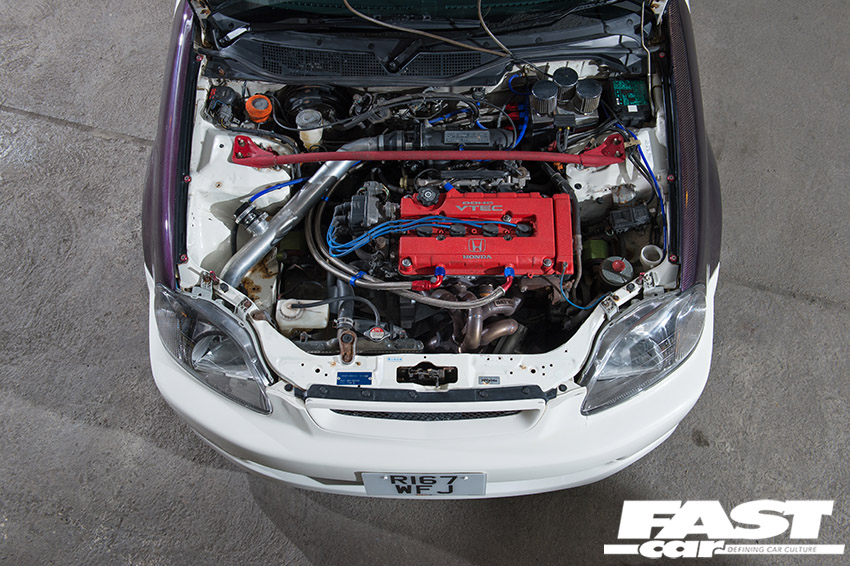 “In April 2012, my best friend, William Rennie, sadly passed away in a car accident,” David explains. “The week before he crashed, I’d talked to him about wanting to turbocharge the modified Honda Civic Type R EK9, as I’d seen it online and thought that would be an epic project to do. So I started planning, and after a few years I was finally in a position to do it without putting too much strain on all the other financial stuff we all have. The build started with the first purchase on 6th July 2017, the mapping was done and car was pretty much ready for daily use on the 7th March 2018.”

The crux of this seismic alteration was a donor B18C4 engine, sourced via JAPCOM in Glasgow (“Fraser McNeil is excellent to deal with, always polite and willing to go the extra mile for his customers,” David assures us), with the build-up being facilitated by Automek. These Glaswegian experts took care of everything from block-honing and head-skimming to assembly, with Andy Baird and his team offering full transparency throughout the build along with over a hundred photos so David could see everything they’d done. When it comes to having confidence in your engine, you can’t beat this sort of craftsmanship. 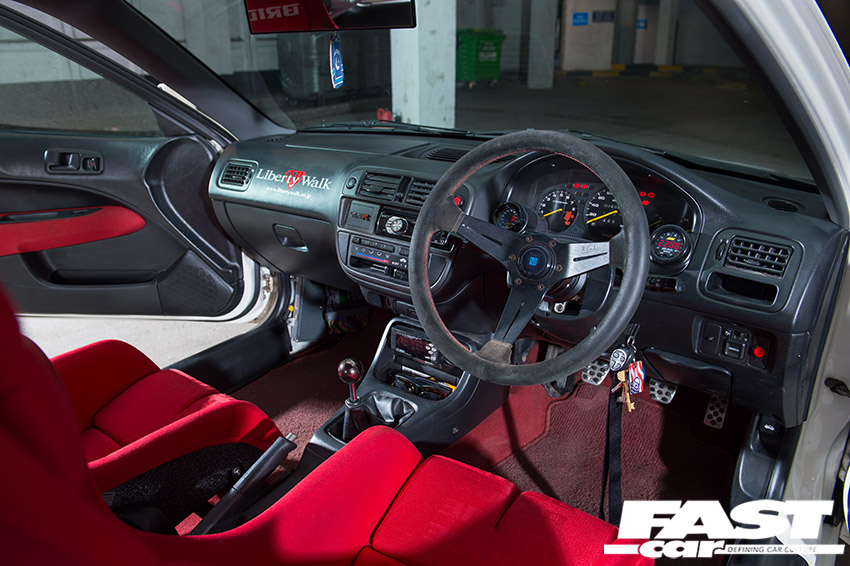 “Because I wanted to spend as little time as possible without the car, and wanted to be part of the build, the engine was shipped up to Aberdeenshire by JAPCOM after being completed by Automek,” says David. “It was fitted by A.M. Vehicle Repairs and myself up in Insch, Aberdeenshire; Adam and Melissa have been my friends for several years and were around for me when I lost Rennie in 2012 – they appreciated why I was doing this build, and were willing to help me out over their weekends. Major thanks to them again on this, I couldn’t have done it without them! Decisions were made early on that I didn’t have a ‘hard roof’ budget, I didn’t want to compromise the project because of a limited budget which might risk doing it twice, or ordering several parts because one wasn’t quite right; I was keen not to go second-hand, everything where possible was brand new.”

The spec of the engine really is quite staggering: taking the B18C4 as a base (which you’d normally find residing beneath the bonnet of a UKDM VTi), that honed block has been stuffed with CP forged pistons and rings, Manley forged H-beam rods, King Racing crankshaft bearings and rod bearings, while the rakish crackle-red cam cover hides Brian Crower Stage 2 turbo cams and adjustable cam gear, along with Brian Crower steel valve springs and retainers. Skunk2 was the source of the Pro Series intake manifold and 70mm Pro throttle body, while the fuelling has been massively uprated via the means of a Walbro 255lph high-pressure fuel pump and iD1000 injectors. The whole toy-box is knocked into line by a Hondata S300 ECU, and the pièce de résistance – but of course – is that turbo. A TD05 twin-scroll, no less, sitting on a Race-Tech manifold with a Turbosmart 2011 BOV. 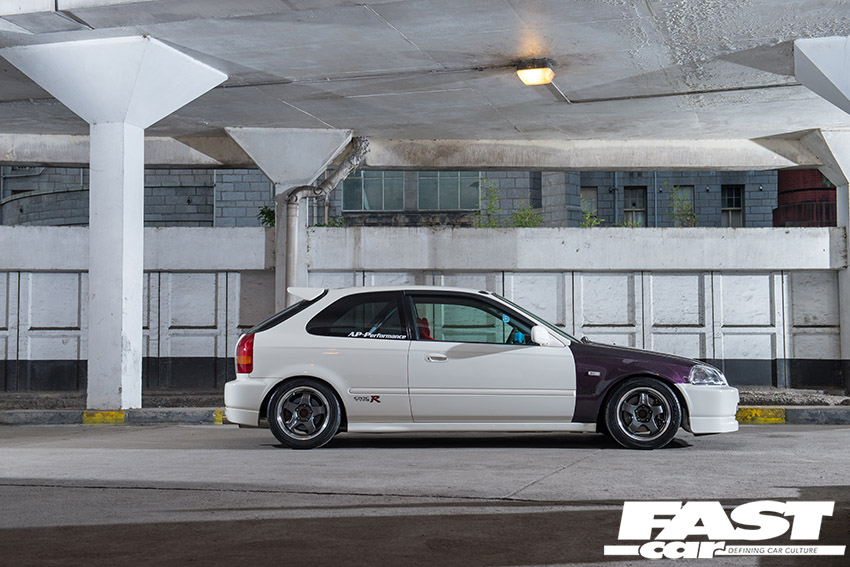 “After the engine was fitted, the car was trailered down to Automek again via JAPCOM, ready for mapping,” David recalls. “Automek did some final checks over to make sure they were happy with everything – they only use AP Performance for their mapping, so it took a few weeks to get this done as they had to get Aonghus over from Ireland to do it… I was happy to wait for this though, his work speaks for him, the map is truly awesome. I daily the car to and from work with no issues! The main hurdle really was the day of mapping; the injectors I’d been supplied with at the time were not 100% right, the flow rate wasn’t equal across all four, so Andy took the injectors from his Lotus and used those – another testament to their incredible service! – spacing out the fuel rail so they fitted and it could be mapped.”

The results are little short of incredible: the mapping session, which was a herculean effort ending around 2am, brought peak power up to a boisterous 425bhp. This was then dialled back to a nice safe 402bhp – “the 2 counts, right?” David laughs. Naturally this means that the modified Honda Civic Type R EK9 is a frantic and eager thing, and it’s a good job that Honda saw fit to bolt in a helical LSD before they let it leave the factory gates. It’s certainly getting a workout now, although David’s keen to reinforce the point that driveability was always considered paramount with this transformation; this isn’t a numbers game, it’s not about showing off – it’s about letting the Civic live its best life, fulfilling its potential. And like he says, it goes everywhere – to work, to the shops, to the gym, getting used as it should. It’s just doing it rather a lot faster than it used to. 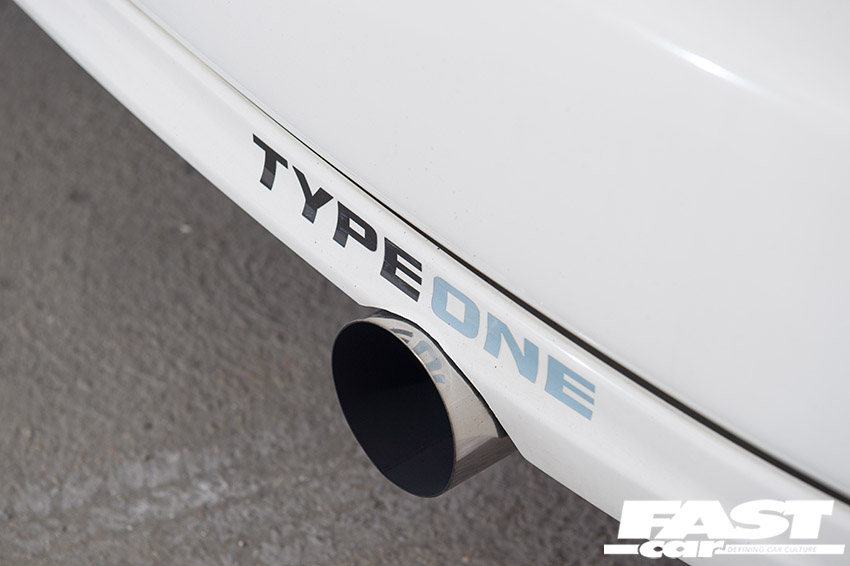 The flawless aesthetic is thanks to KD Kustoms in Lochgelly, Fife, the only bodyshop allowed to touch the car, who are always happy to move things around to accommodate David’s requirements; the finish of the car is a thoroughly appropriate counterpart to the menace that lurks beneath. “Some people see it as a boy racer car, but those who recognise an EK9 appreciate it for what it is,” he muses. “Although when I explain that it’s turbocharged, they’re quite often taken aback! The only real negatives I hear are about why the body’s two colours, but there’s a simple answer to that: it’s a panda from Japan, Japanese pandas are rare, and so are turbo EK9s.” David is amused by this as most people don’t question the fact, even though he knows pandas are from China…

And with that infallible logic firmly laid down, David flexes his right ankle and disappears in a maelstrom of atomised hydrocarbons, turbo whistling, front tyres chirruping, tailpipe rasping, off on a new adventure. This is an iconic car, that goes without saying, but there’s no rulebook saying that these icons are untouchable. With the influence of good friends, the memory of a blood-brother, the involvement of the best of the best in the industry, and a pocketful of dreams, David’s created something unique. It’s the car he always chose in the video games back in the day, but the real deal has turned out better than he could ever have hoped. 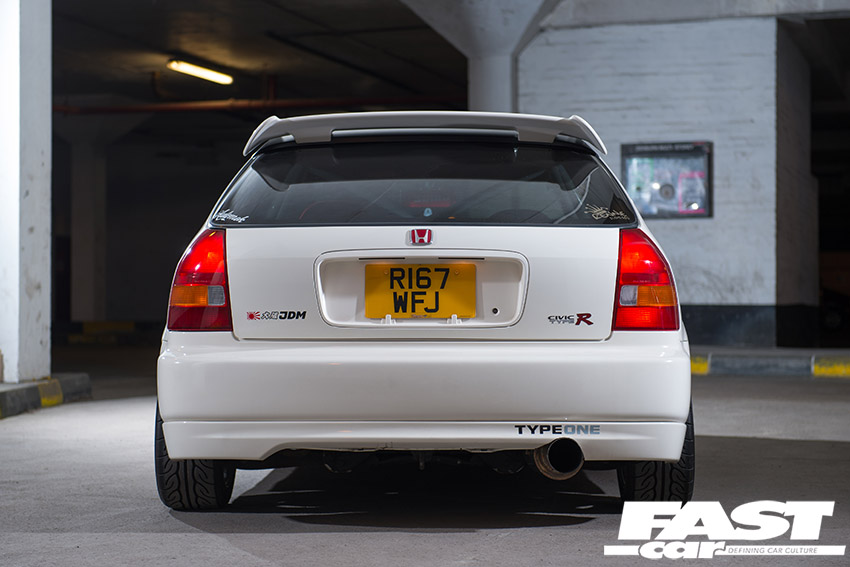