The Honda Civic EK has been the darling of the modified community for years. But don’t go thinking it’s all high-end split-rims and flawless paint jobs – Shane Stanley’s taken the spirit of frenetic B-series tuning and dragged it in a thrilling rally direction.

Our favourite type of feature car is that which willfully disconnects what you’re expecting to see. Multi-marque engine swaps neatly fulfil this brief, as would ideas like converting an Impreza to RWD for drifting purposes, turning a minivan into a VIP cruiser, that type of thing. Subverting expectation is the name of the game, raising eyebrows with unexpected concepts.

So it is with this modified Honda Civic EK (check out our ultimate Honda Civic Type R guide)– because we’ve seen all sorts of different ideas carried out on this platform, but almost all of them have been along the lines of fast-road street-racers, track projects or stance builds. It’s not often you see an EK in pared-back rally spec, is it? 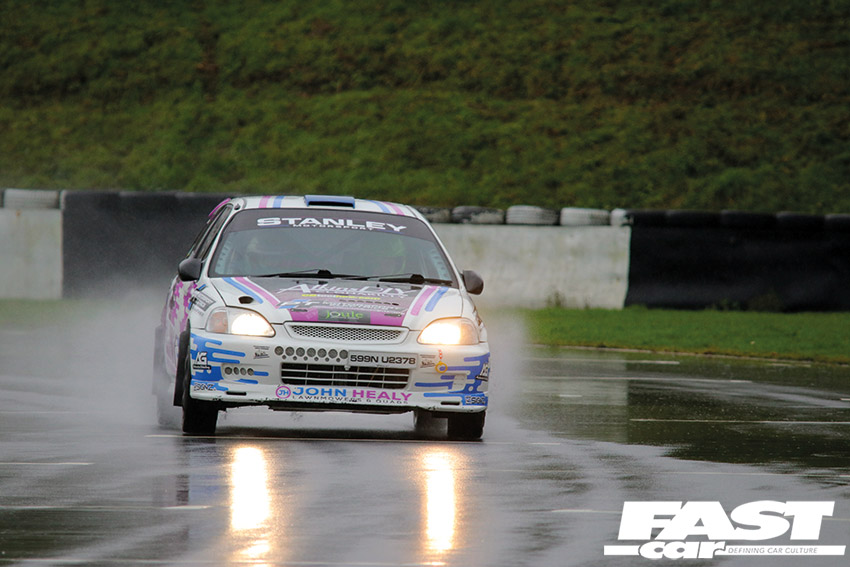 Looking back over the history of the sixth-gen Civic, we perhaps need to remind ourselves that it was not an unsporting machine in period; indeed, its compact dimensions and light weight made it a strong candidate for stage rallying right from the off. Motorsport may have its fair share of snobbery, but when it comes to choosing a car, it’s about selecting the right tool for the job regardless of stigma. Logically it follows that the Civic puts itself forward as a strong candidate as a rally car today for four principle reasons: firstly, it’s enjoying a renaissance of retro chic, being appreciated by many as a classic example of the breed rather than simply an ageing hatchback. 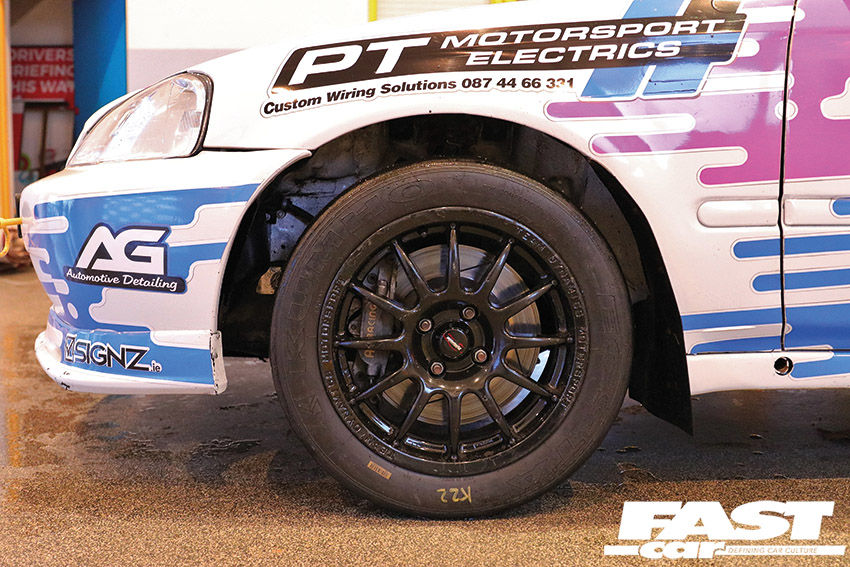 Secondly, they have rally provenance in spades – type ‘rally EK Civic’ into Google Images or YouTube, and you’ll see. And thirdly, there’s a special trick that the B-Series engine pulls off time and time again, proving itself to be a hilariously tuneable (check out our EK9 Type R tuning guide) and rev-hungry monster. In the case of Shane Stanley’s modified Honda Civic EK, this is borne out in fine style by virtue of turning the revered B16 into some manner of hornets’ nest of aggression, mixing retro tuning with modern tricks to create something impressively competitive.

What’s perhaps most fun about this build, however, is that it looks like an EK9 Civic Type R. It isn’t one, it’s wearing its bigger brother’s bodykit, but the overall effect is to again subvert expectation – EK9s generally either get cherished as stock or turned into supremely focused track cars. The idea of bouncing one through forests and seeking out gravel rash is enough to trouble the purists. 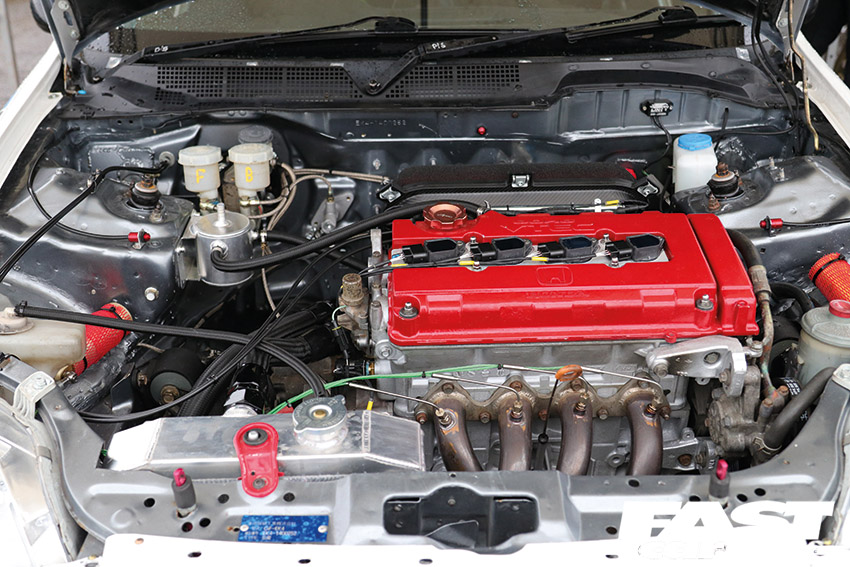 So where did the whole idea of this modified Honda Civic EK come about? Well, the germ of the concept was planted way back in Shane’s personal history: “I have been involved in rallying since a very young age,” he explains, “from attending with my family and supporting my father, who was a very successful navigator. He was competing for nearly ten years in various different cars, from a Peugeot 205 GTI to a Vauxhall Chevette, to a Group A Subaru Impreza. I started navigating in a single-day rally at the end of the 2009 season, and in 2010 I progressed to driving a Honda Civic EF on Irish forestry events. I competed in that car for five years with a lot of success, with individual rally wins and championships.”

The rallying is in the blood then, and the notion of partaking in such thrills in a Civic is a well-trodden path in the Stanley household. And it was back in 2015 that this particular chapter of Shane’s rallying history started to be written, when he bought the modified Honda Civic EK you see before you as a standard Class 2 rally car. Naturally the EK as bought back then was very different to what you see today, and there’s been a huge amount of work on honing and refining the spec and fitting the correct upgrades to get it where he wanted it to be. 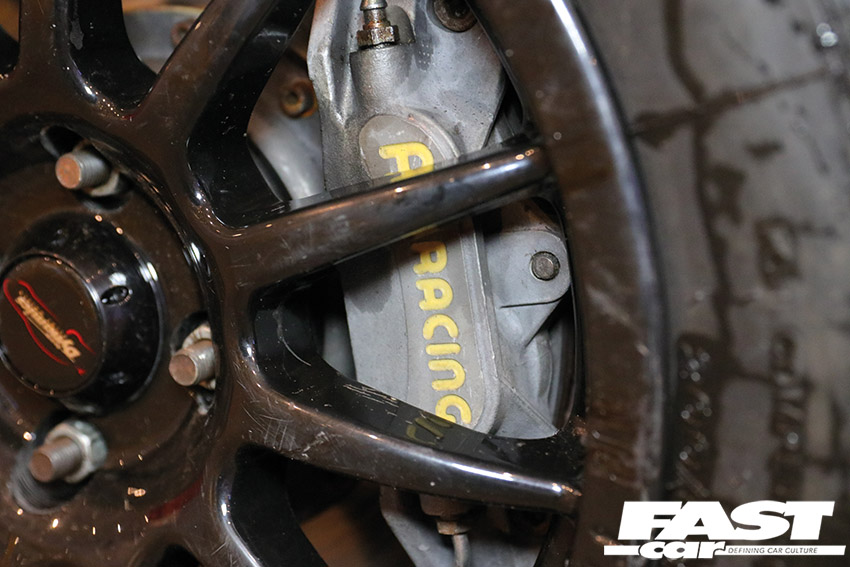 “I carried out a full chassis rebuild in 2016, at home in my workshop,” Shane explains, “and sent the car to PT Motorsport Electrics for a full rewire. That was the start of a great relationship between myself and Paul at PT Motorsport. It led to a new career opportunity, and I now work with him as one of the head wiring harness technicians.”

Fastidious work indeed, and the engine which is having its digits so carefully massaged is truly a thing of wonder. Taking a B16A2 bottom end as a base, Shane’s fully rebuilt it and mated it to a rebuilt B16B head to create a best-of-both-worlds hybrid. Nestled within are Wiseco 82mm pistons at the bottom and Skunk2 cams up top, and fueling is taken care of via juicy Jenvey 48mm taper direct-to-head throttle bodies, the Jenvey ETA2 electronic actuator neatly eliminating the throttle cable. The management and electrics are, as you’d imagine, pretty impressive, with Link Xtreme engine management running the show along with a Link CAN lambda and Ecumaster EGT-to-CAN module. The ingenuity of PT Motorsports manifests itself in the K20 coil conversion as well as the distributor delete and custom B16 trigger kit, and the whole shooting match barks angrily through a bespoke stainless exhaust system which boasts temperature sensors in each runner of the 4-2-1 manifold. 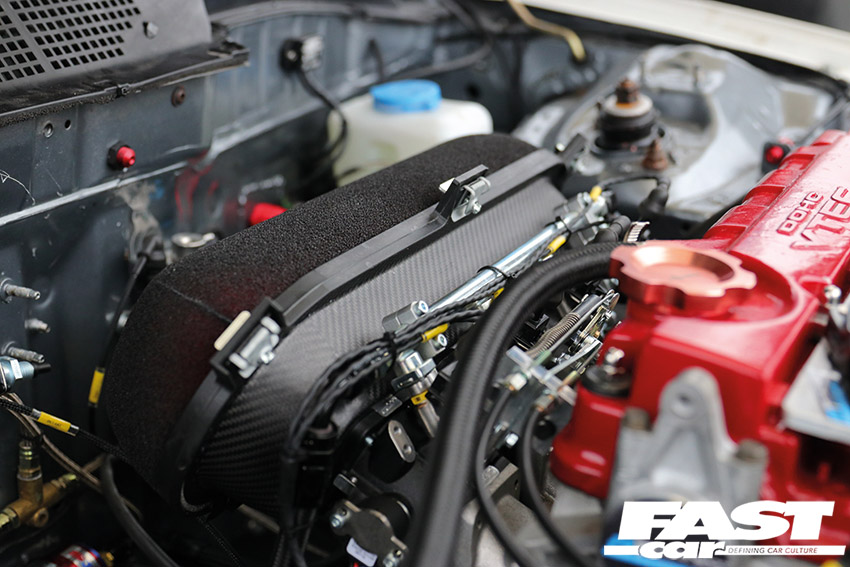 This really is a killer B. Hanging off the back of all this we find an EK9 Type R gearbox rebuilt with an M Factory gear kit and complemented by a Kaaz LSD; there’s also an Exedy triple-plate clutch and Toda alloy lightweight flywheel. Peak power is 221bhp, perhaps not the most raucous figures you’ve heard today, but the whole point of this is to create usable, reliable power exactly where Shane needs it; his mid-to-upper-range powerband is where he likes to hang out, and that’s where the rich buffet of power resides.

There’s a magnificent amount of arch gap on display, the polar opposite of pretty much every Civic we feature, and of course eminently appropriate for this EK’s rally dynamics. It’s running Proflex 3-way adjustable coilovers, and the brakes are pretty bloody impressive too – AP Racing 4-pots up front, with grooved discs and Carbone Lorraine RC6 brake pads all round, joined by a Group 4 pedal box with AP cylinders and a Wilwood brake bias valve. It’s all about adjustability here, and given the massive weight-loss programme this car’s enjoyed, the stopping power is pretty devastating. Peek inside the interior and you’ll spy that there’s been precisely zero mucking about here: there’s a full rollcage, as you’d expect – a custom job, with pukka FIA creds – and it’s joined by the very bare minimum required to allow the thing to function as a machine of pure focus. An OMP seat and HANS WRC harness, flocked dash, a Stilo DG10 Bluetooth intercom, and a cutting-edge Link MXS Strada dash to talk to all those custom electrics and keep a keen eye on that jewel-like B-series. That’s it. Nothing more’s needed, this is a competition machine of single-minded purity. 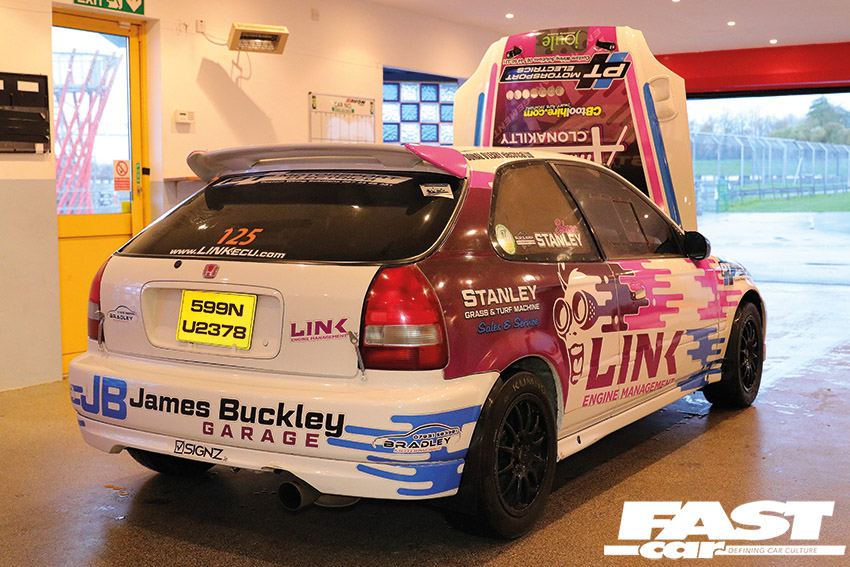 After a long history of rallying, and a huge amount of blood, sweat and tears to turn this modified Honda Civic EK into the ultimate version of itself, you can be sure that Shane will be wringing its neck at every given opportunity… and what we really love is that it’s not the sort of EK people expect to see. Sure, we love street-racers, but this rally weapon is something else!]