Plumber Mason Klingsick knows all about the importance of reliability – his modified Ford Focus ST Mk2 has 641bhp on tap, it’s hot on the gas and built to last.

A Suzuki Swift Sport doesn’t sound like the ideal starting point for a fast Ford fan, but for Suffolk-based Mason Klingsick, it was the first in a long line of motors he tried before finding his rightful place at Uncle Henry’s feet.

Quick to modify the Suzuki, Mason added a custom exhaust, semi-slicks and an induction kit. Since then, many cars have spent time on the Klingsick driveway, including a caged and tuned Audi TT and a sorted Subaru Impreza WRX.

Eventually, he saw the Blue Oval-shaped light and crossed the county line to Cambridgeshire to pick up this modified Ford Focus ST Mk2 in 2019. 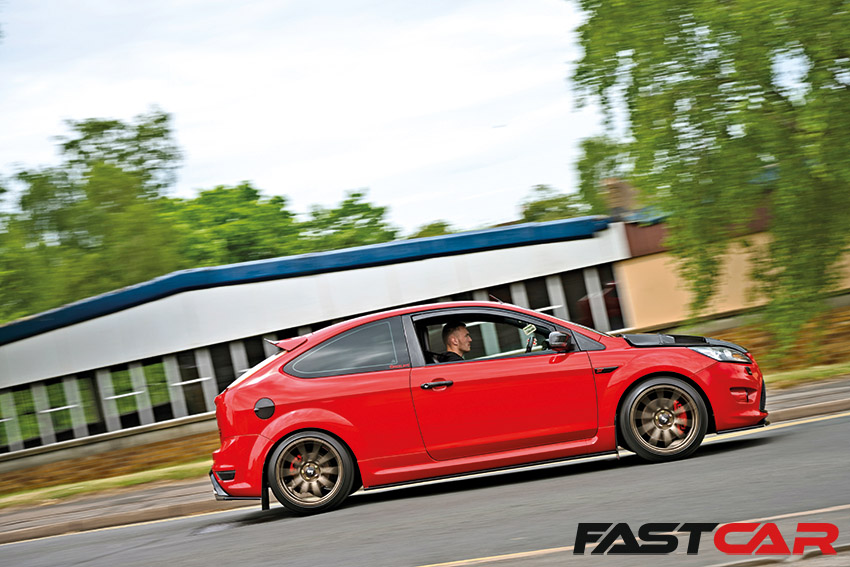 He says, “I’ve had loads of other cars, but I never really kept them for long – normally only for about five or six months. That was until I got the ST.”

Mason was initially unsure if he wanted to modify the Focus ST225, but liked the idea of an unabused blank canvas to avoid the all-too-familiar undoing of somebody else’s handiwork. So an RW Developments 3.5in turbo-back exhaust system was the first mod, which helped with breathing and made the gorgeous five-cylinder burble more audible.

A Stage 1 remap and induction kit with Proram filter followed. We all know how these projects can snowball, and before long the decision was made to go all out and have a forged motor built. But why a modified Ford Focus ST Mk2? 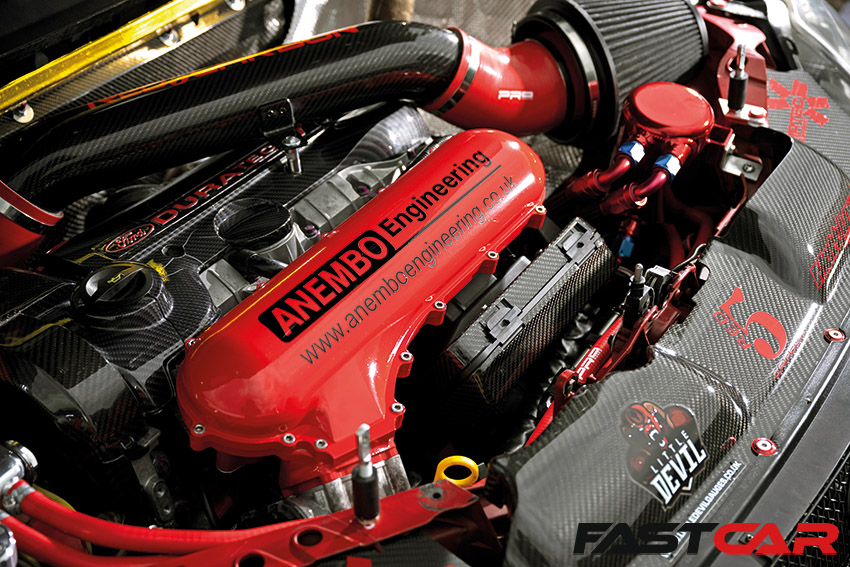 Mason explains, “I saw there was an opportunity to do something different and build a top-flight ST, as most of the big-power builds use an RS as the starting point.”

Matt Lewis Motorsport was entrusted with the comprehensive build. A linered block was selected to ease the worries of cracks; the build added Mahle Motorsport pistons and big end bearings, K1 H-beam rods, King Race main bearings and a polished crank. The head was reconditioned and fitted with Stage 1 Newman cams, chosen for the accessible power band of 1500-to-6000rpm. 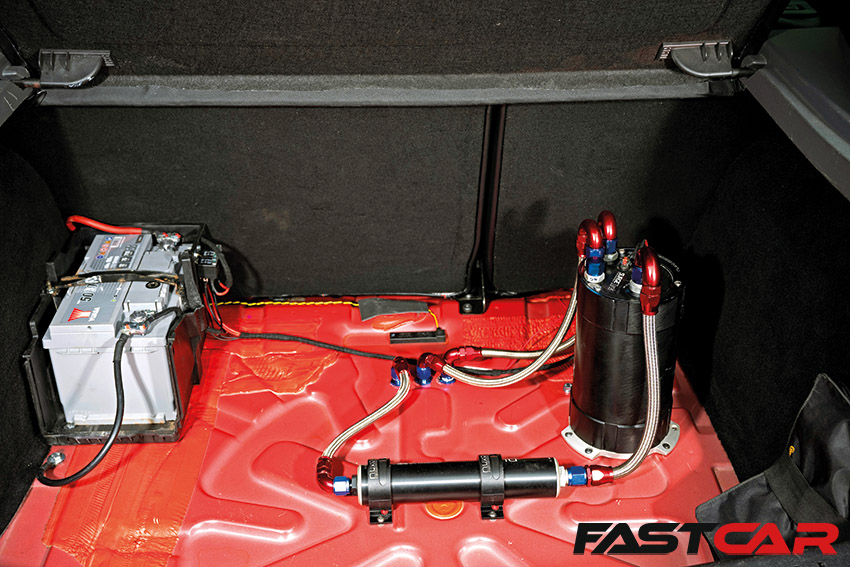 The welded top of the Spec-R oil filter housing eliminates the leakage problem that the plastic originals often suffer.  An air-con delete was required to install a substantial Airtec Gobstopper intercooler. Elsewhere, the Airtec catalogue was hit up for a gearbox torque mount, header tank and power steering tank. 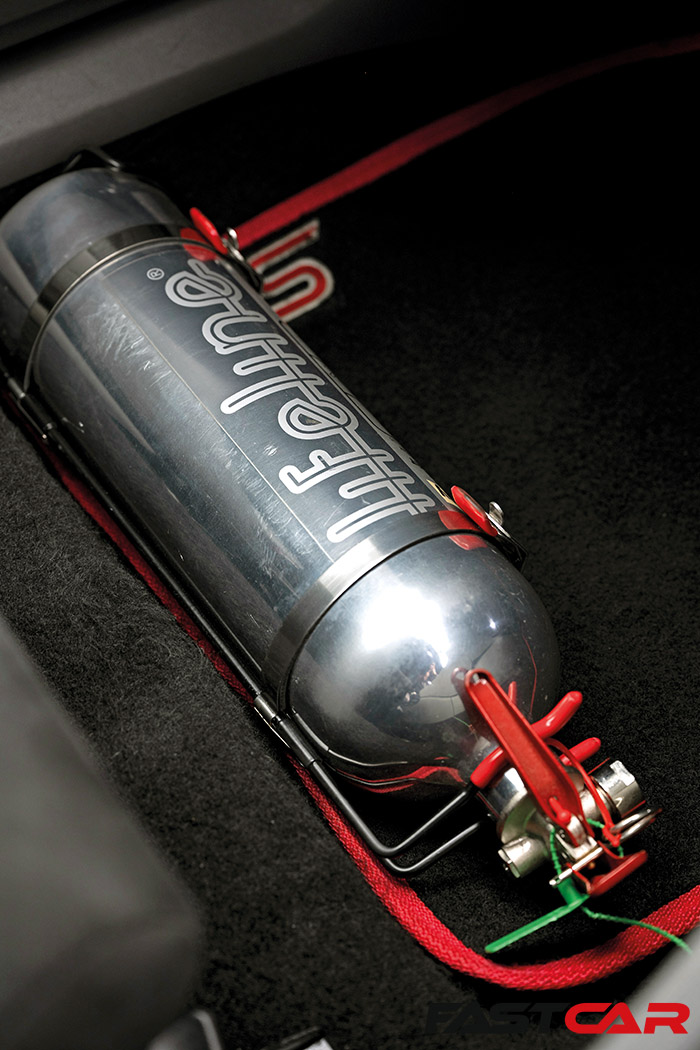 Mason reports that the most challenging part of the build was getting the screamer pipe to fit. Dean at RW Developments came up trumps with his superb fabrication work, and modified the Nortech tubular manifold to allow the screamer pipe to exit via the bonnet. No mean feat, as it manages to start at the back of the engine, avoid water pipes and the strut brace, and exit adjacent to the centre of the head. Seeing flames shoot into the night sky when the car is pushing on reportedly never gets old.

While the car was dismantled, it was a good opportunity to have the gearbox reconditioned. Mason says, “I chose a Wavetrac LSD as opposed to a Quaife, as I was keen not to default to RS parts where I could.” 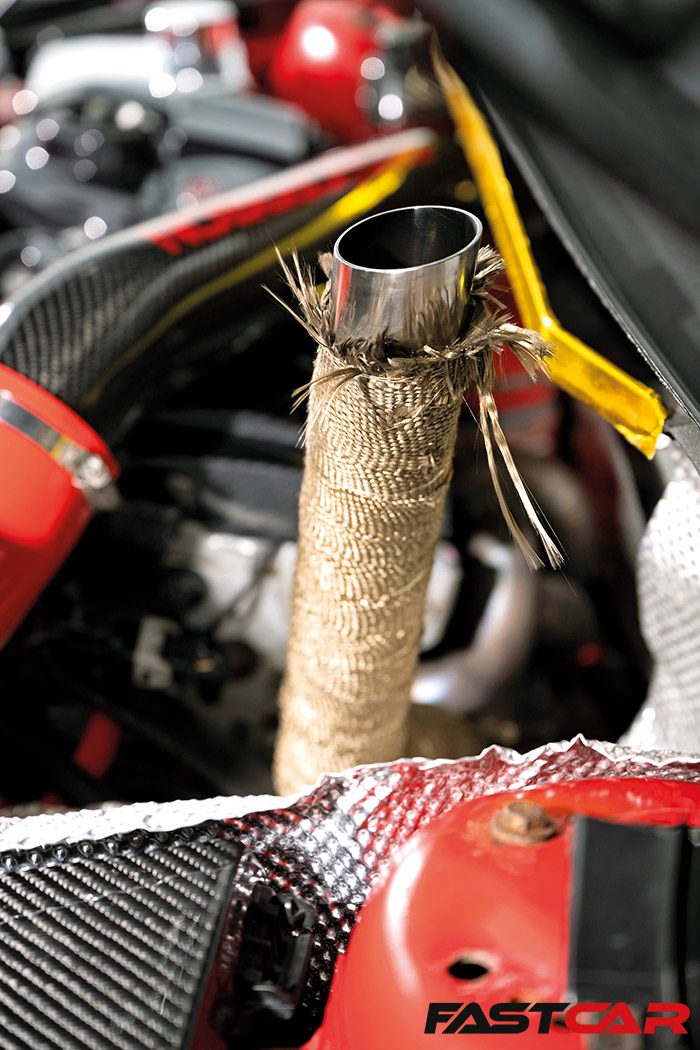 Also helping the front wheels gain some traction is the Syvecs S6 Plus ECU. As well as the obvious stand-alone mapping benefits, this system features anti-lag, launch control and torque biasing traction control. It’s used with a Syvecs Fuel Flex sensor that closely monitors fuel content and quality and relays the info to the management system. Again, this setup is as much about belt-and-braces safety as it is pure performance. Powerflex mounts were used for the upper engine, gearbox and exhaust.

While a 641bhp rolling road figure is not for the faint-hearted, Mason hopes to break the 700 barrier with a sidewinder turbo setup in future. Elsewhere, he intends to swap the Stance+ coilovers for a BC Racing kit. A K-Sport big brake kit is also on the cards, as although the modified Ford Focus ST Mk2 is running uprated discs and pads, the monumental power increase is working them a little too hard. 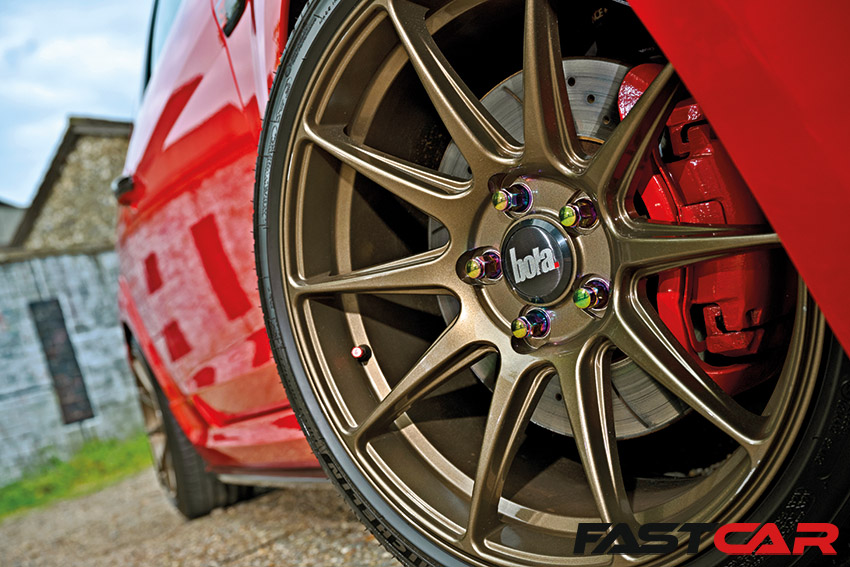 Many well-thought-out feature cars follow a theme throughout the build, and Mason’s is no exception. Although an RS Focus liberated its Recaro interior, Mason wanted to sing his ST song loud and proud, and thus had the Recaros reupholstered in leather and Alcantara with red ST embroidery. Red stitching further ties in the exterior.

On the outside, carbon fibre punctuates the Colorado Red, continuing the colour scheme except for bronze Bola B15 18in wheels; Michelin Pilot Sport 4 tyres inspire confidence. 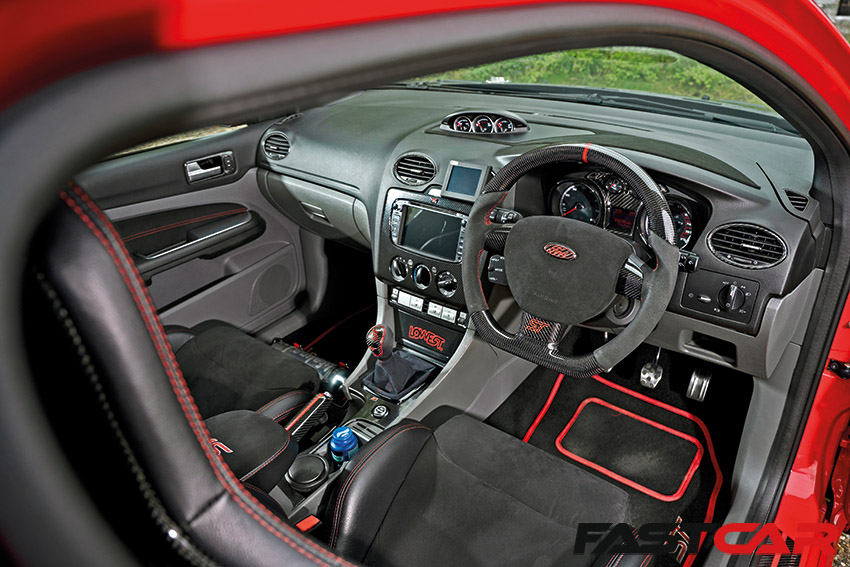 Mason was keen to enhance the car’s looks while retaining the ST flavour. A Maxton lowline bodykit, spoiler extension and rear diffuser fit the bill perfectly, while rally-style mud flaps and WRC-style bonnet vents give a good clue that Mason is a self-confessed WRC fan.

A Zunsport grille set modernises the front end a treat with its fine, neater-looking mesh. The red colour-coded Airtec script on the intercooler gives a clue to the car’s intentions. 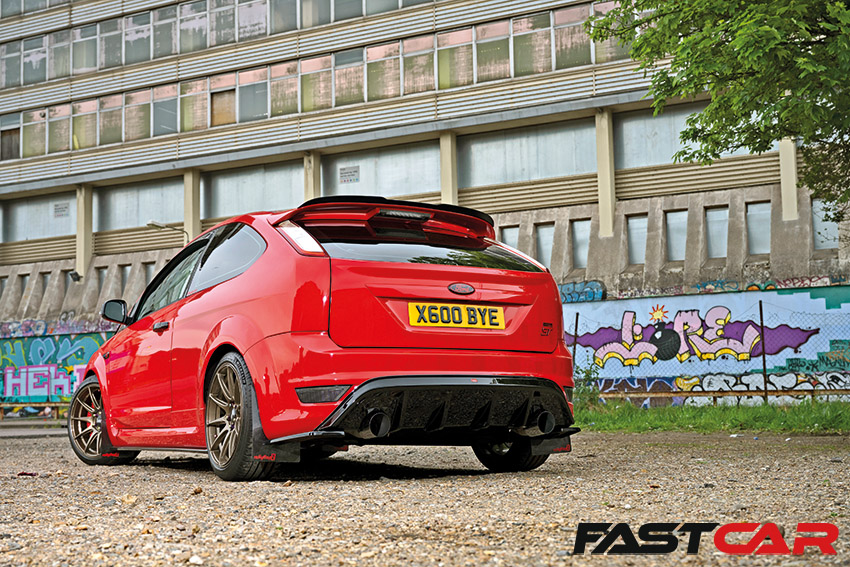 Mason has created what must be one of the best STs in the country, and with his plans for the future, there is still more to come.

So despite his Swift start, we’re pleased Mason swapped to fast Fords. And with his attention to detail and robust approach to tuning, we’re sure we’ll be seeing this car about for years to come. Strong stuff.

Stance+ coilovers all round