A modified Ford Focus RS Mk2 could never be called a sleeper, but with around 600bhp hiding beneath the subtle-looking exterior, Ian Morris’s stunner packs more of a punch than you might think.

It’s easy to forget things have come a long way in the tuning scene over the last 20 years. There was a time when 600bhp in a road car was virtually unheard of, with those kinds of ballistic figures reserved for out-and-out race cars, expensive supercars or big-budget JDM builds.

But now we’re seeing a new wave of modified cars on the streets that not only produce serious power but also look so understated that anyone would be hard pushed to guess what they were capable of. 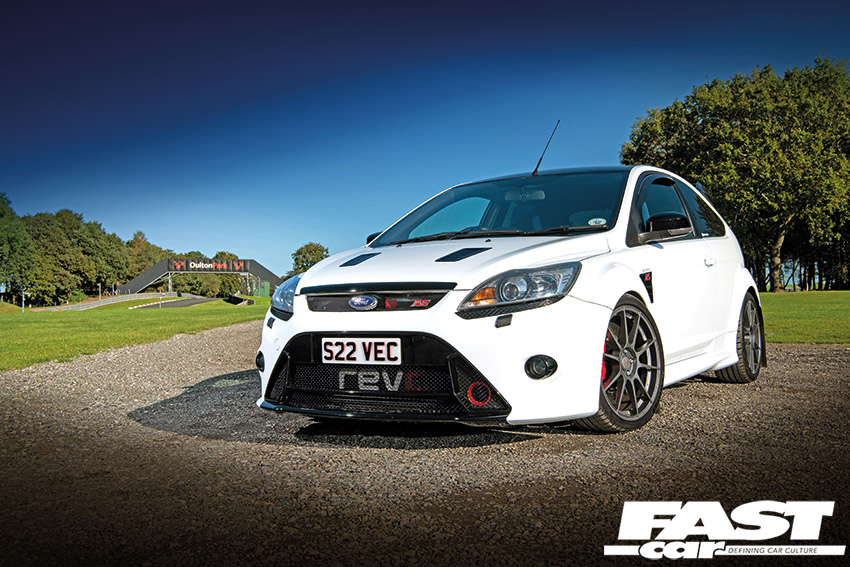 Ian Morris’s clean-cut modified Ford Focus RS Mk2 falls firmly into that category, as with just a handful of small modifications on view from the outside, only the eagle-eyed will notice the big brake setup, which hints at the car’s huge performance. Sure enough, the extra stopping power is needed because this unassuming Focus RS is currently producing 600bhp on a mild tune, with plenty more to come.

Creating a subtle but serious road car like this is a bit of an art, but it helps that Ian knows his way around a highly modified Ford. His first was a Mk4 XR3i back in 1995, which developed into a highly modified ’90-spec RS Turbo replica, complete with 1.9-litre American tall-block CVH, big turbo, fifth injector and plenty more. Since then, he’s owned several other Fords, including a rear-wheel-drive Sierra Cosworth and a four-wheel-drive Sapphire Cosworth that were both putting out well over 500bhp. 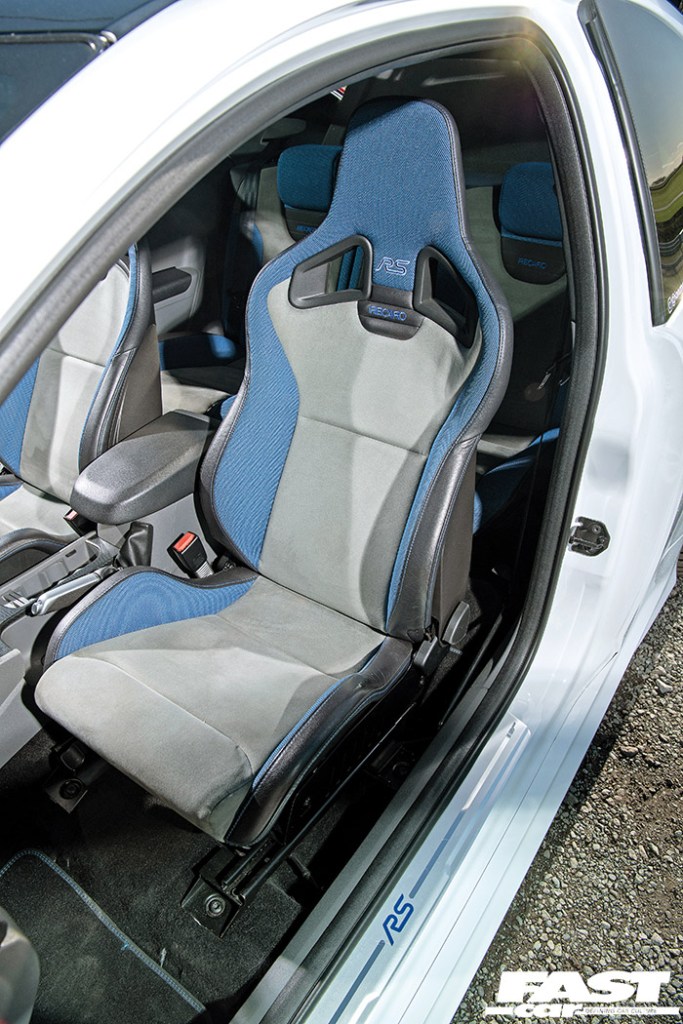 This isn’t Ian’s first Mk2 Focus RS either; before owning this example he had a Performance Blue model that he bought nearly new and owned for six years (check out our Mk2 Focus RS buyer’s guide). That car was used as a daily-driver but Ian had plans to heavily modify the car and was in the process of beginning the development when he came across this Frozen White example for sale.

With a comprehensive list of modifications already in place, Ian realised he should buy a car someone else had already spent their time and money on, especially as the tech spec seemed to include just about every modification he intended on carrying out on his blue car. 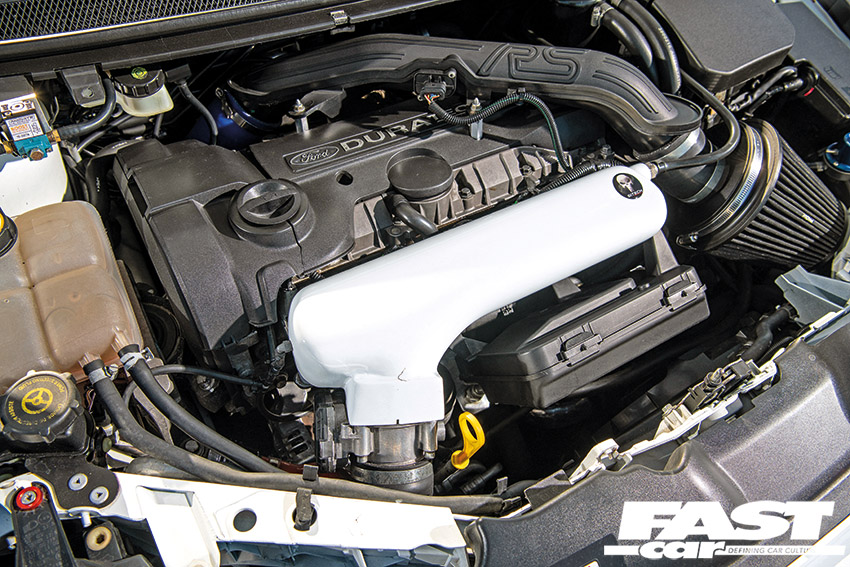 Ian says, “It made sense to part-exchange my car for this one; my blue car was just too mint to pull apart. The story I was told was the previous owner had it built to this spec but only had it about an hour before he got caught racing in it by an unmarked police car. I’m not totally sure it’s true, but he had to sell the car regardless.”

Whatever its history may have been, it had been built by Sitech Racing in Scotland and seemed to tick all the right boxes thanks to an engine build with forged internals and a big turbo. Plus there was the Revo big brake kit, which features Alcon six-pot callipers and giant 380mm floating discs to help keep a rein on things, as well as lightweight wheels to cover them and uprated Eibach uprated springs and dampers. 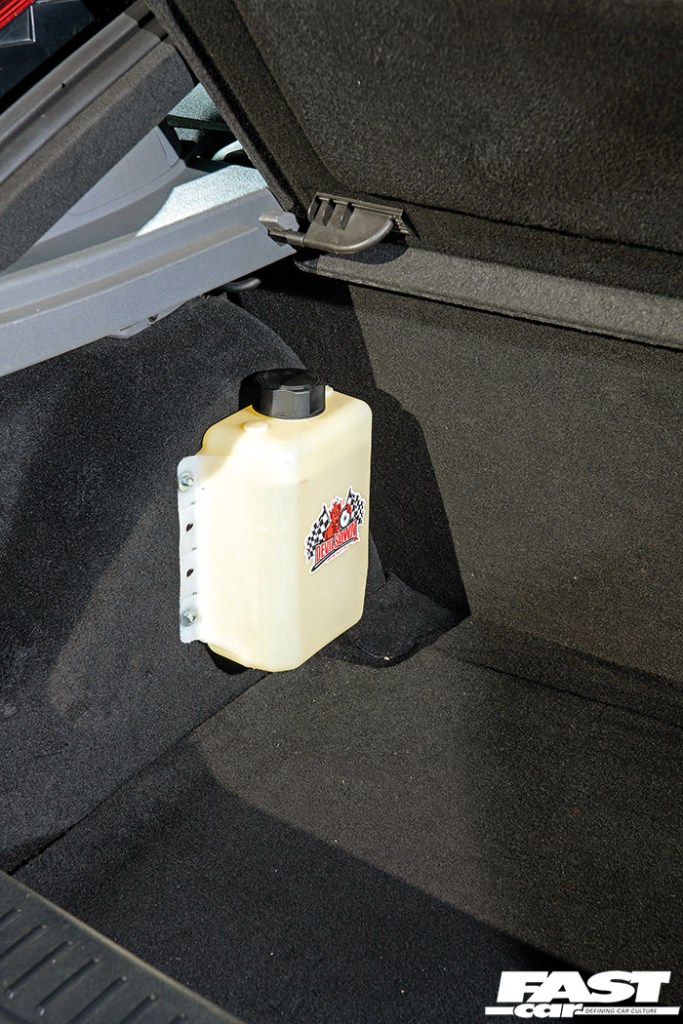 But the car wasn’t quite the easy buy-and-enjoy option he hoped for, as within a couple of weeks there were signs it wasn’t healthy.

“It was using more water than oil, so I sent the car to Matt Lewis Motorsport and this was the first one they fitted with uprated liners,” says Ian.

The result of the enhanced reliability modifications has been a bulletproof combination that Ian says has proven its worth, having covered around 8000 hard miles so far. He’s understandably very happy with it.

In current form, Ian says the car makes 600bhp with a relatively mild tune, but thanks to the linered block, uprated engine internals and GT30 turbo with the larger exhaust housing, there’s plenty of potential to turn it up. 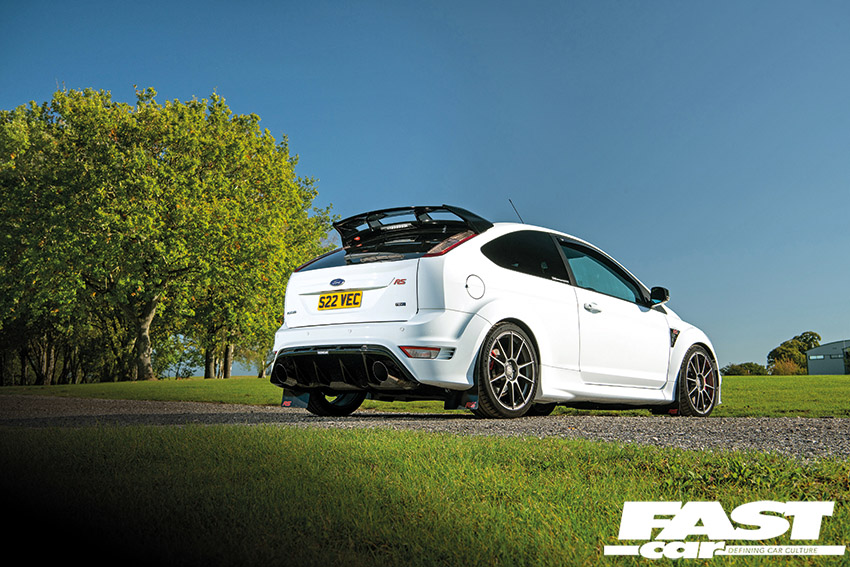 Ian says, “It’s one of the fastest cars I’ve owned, and is similar to the big-power Cosworths I’ve had in the past. It’s currently on Revo Stage 5+ software. I was going to switch to Syvecs but for now I’ll leave it as it is. I can get in it, give it death and it just does what it does. I love it.”

Despite the range of modifications and huge headline power figure, Ian has worked hard to make sure the Focus looks understated from every angle, which is why you won’t find lairy graphics, large wings or brightly coloured wheels. 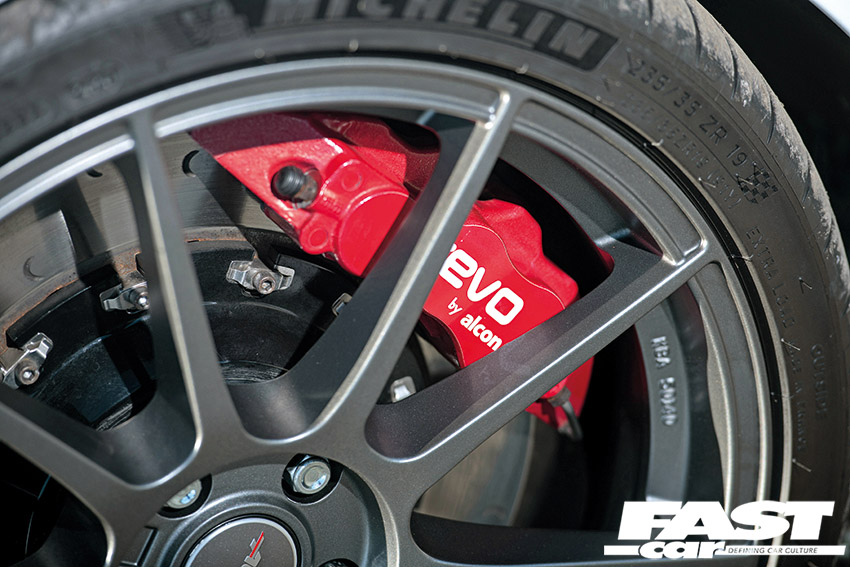 Ian says, “I wanted it to look subtle, just like a standard car. I’ve also painted some engine bay parts in black so it looks more original.”

As a result, even with the bonnet open on the modified Ford Focus RS Mk2, it looks relatively standard; the OEM plastics are still in place, and the big turbo is hiding at the back of the engine. Even the screamer pipe is angled at the floor, rather than out of the bonnet as we’re becoming used to seeing.

It’s a similar story inside too, where the original seats and trim have been left just as Ford intended, which helps keep a low profile. 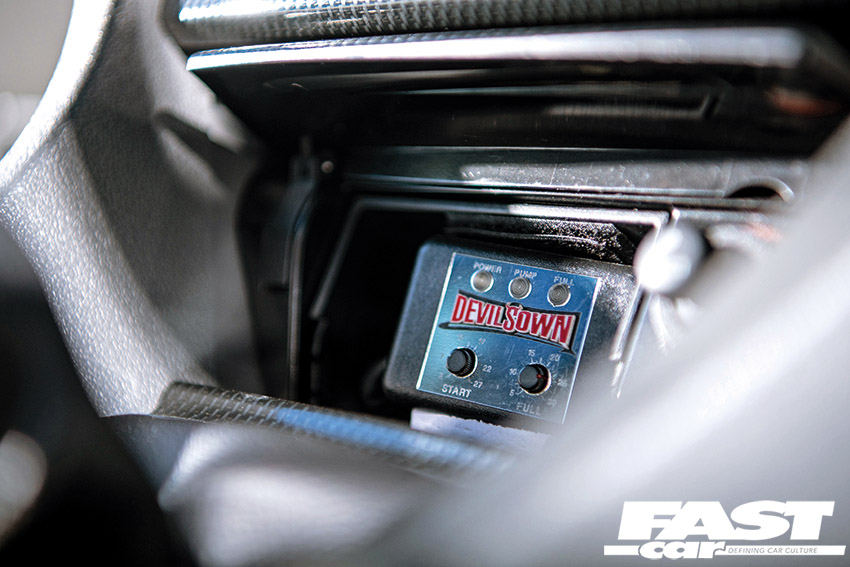 Ian says, “I’m not shy of driving it, so it gets driven hard. It drives very nicely, and the brakes are awesome.

“The clutch can be hard work at times, but I don’t use the car every day as I have a Mk3 Focus ST diesel for that.

“I mainly use the RS as a toy to have fun with, including regular blasts out with my mates and a few shows and meets too.” 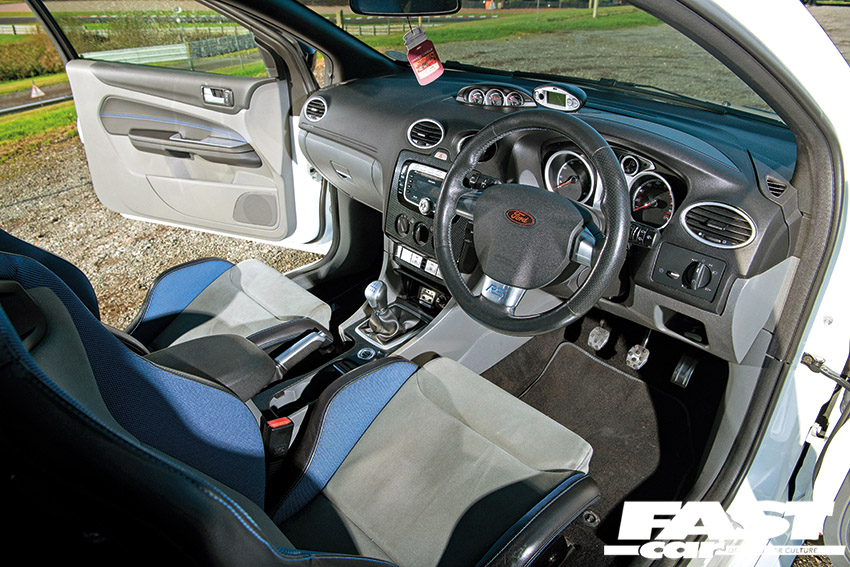 Having created the perfect package of big power, reliability and under-the-radar looks, Ian only has a handful of plans for the future, which include a tubular manifold and perhaps an ECU change, as there’s little holding the modified Ford Focus RS Mk2 back from making some seriously monstrous power figures.

But then, 600bhp is still a lot in a road car, and it’s easy to take that for granted.