When biker Robert Casebrook wanted a wild ride to get back into four-wheeled fun, he couldn’t let this rear-wheel drive, ST170-engined, modified Ford Fiesta Mk1 slide by…

A cloud of acrid steely blue smoke pours off the screaming 175-section Yokohama tyres as the outer layer of rubber is vaporized by Robert Casebrook’s right foot.

The short wheelbase of the Ford Fiesta Mk1, combined with its low weight and almost 200bhp going directly to the rear wheels, makes light work of pulling bonkers burnouts and dizzying donuts. And it’s this innate ability to slap a huge toothy grin across its owner’s face that was why 45-year-old Rob decided to take on the part-finished project back in 2018. 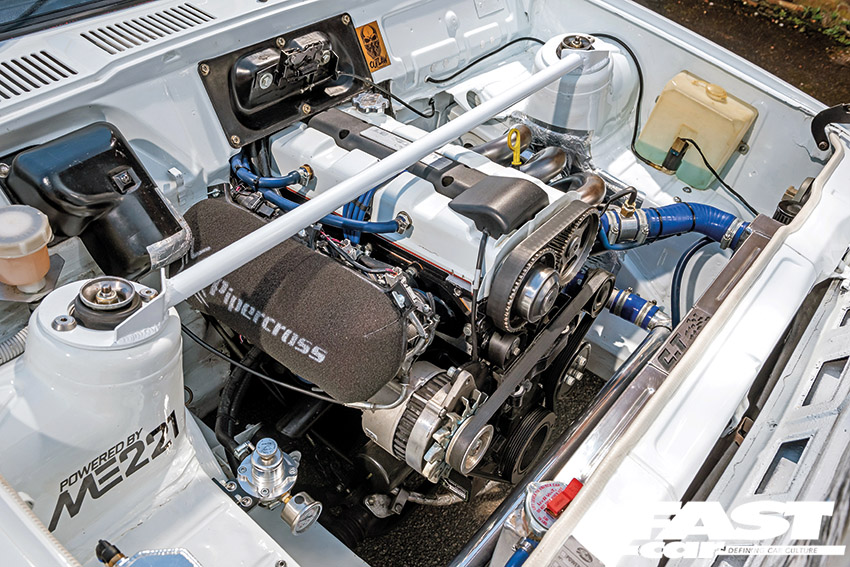 “I’ve always been into fast Fords and have owned a string of Fiestas and Escorts over the years, all of them modified in some way or another, but a few years ago I decided to take a break from modified cars and moved on to two wheels and got into custom bikes,” explains the Milton Keynes-based builder.

“Bikes were great fun, and the thrill of speed was exceptional, but eventually I began to miss my Fords, so I started looking at getting a project that would get me back on four wheels but retain the high adrenaline rush I got from the bikes.” 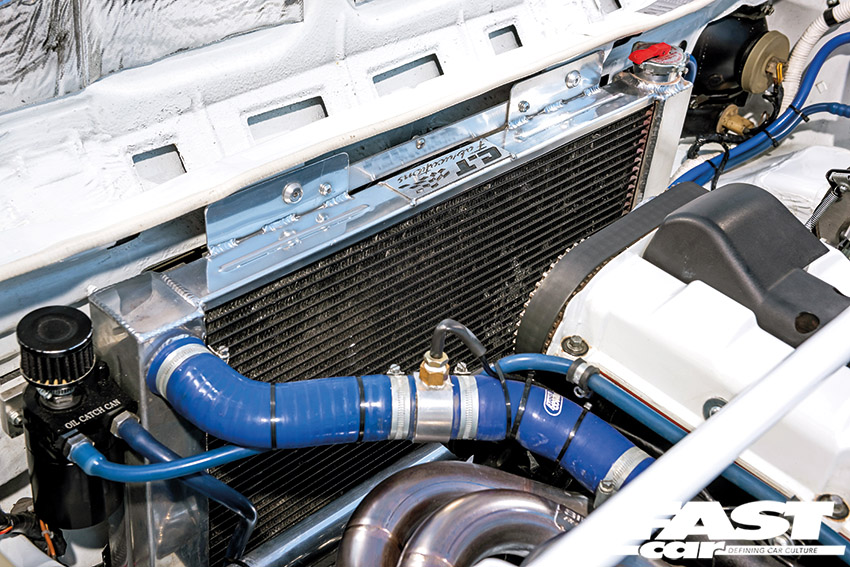 On the face of it, that’s a pretty tall order, especially when Rob’s era of choice is the late Seventies and early Eighties when it comes to cars. It left him scratching his head when deciding where he should be investing his time and money. In the end fate intervened and an interesting unfinished project presented itself on Facebook Marketplace.

“My criteria was small, fast and rear-wheel drive, so when I saw a Pinto-engined modified Ford Fiesta Mk1 that had been converted to rear-wheel drive come up for sale, it immediately piqued my interest,” says Rob. 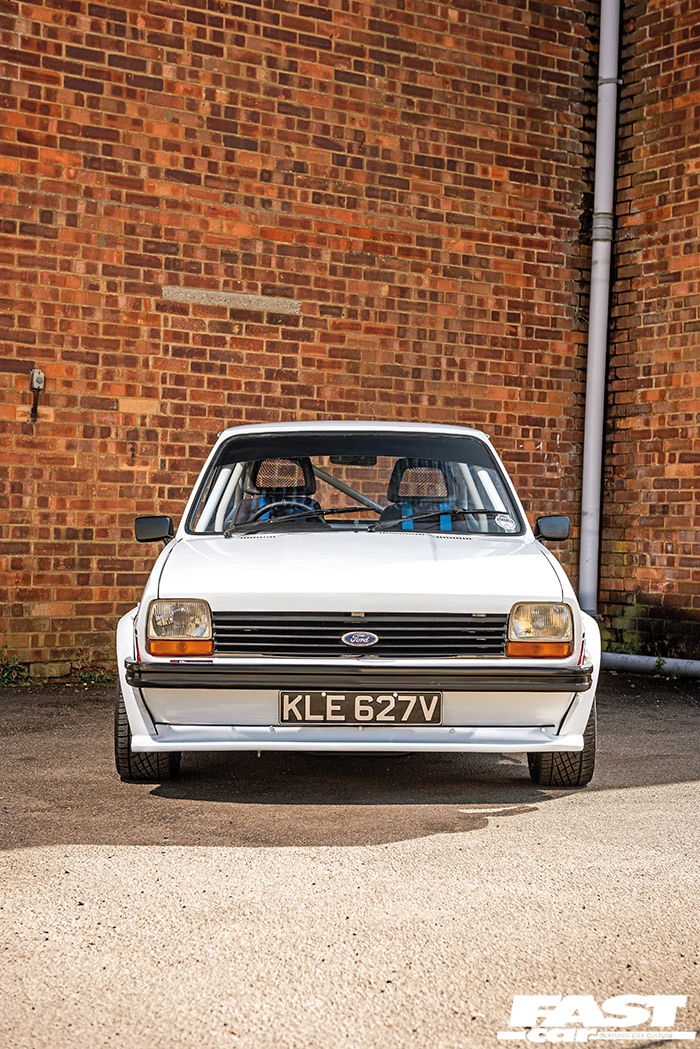 Based on the south coast in Eastbourne, the flying modified Ford Fiesta Mk1 – which left the factory as a 1.1-litre L – had most of the main structural and mechanical work already completed, including a 2.1-litre Pinto engine fed by twin Weber 45s, a five-speed Mazda RX-8 gearbox, and Mk2 Escort English axle with an aggressive limited-slip differential.

Rob says, “It was also equipped with a full custom roll cage and a pair of motorsport bucket seats. The wider rally arches were fitted but just tacked on really and not fitted properly. I think it was originally built for the track and was pretty rough and ready, especially considering the £9000 asking price. 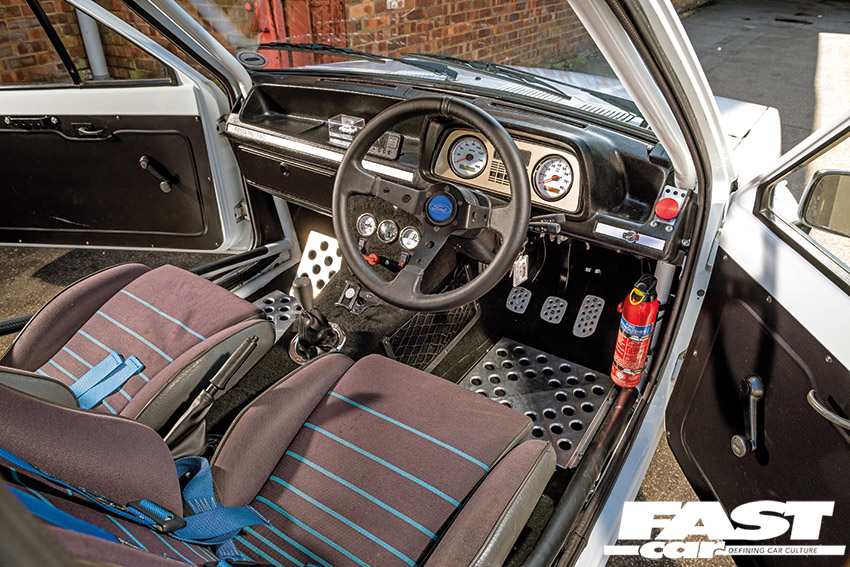 “But it ran, and when I did the man maths as to what I thought it would cost me to build something similar from scratch, it worked out a bargain.”

Needless to say, this was all the incentive Rob needed to part with his hard-earned cash and the Fiesta was soon on his driveway. 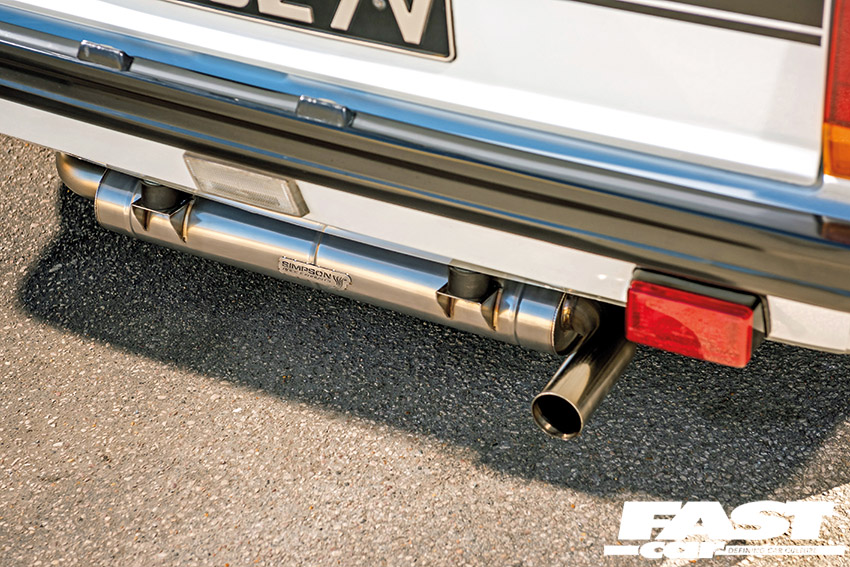 Rob remembers, “It was a cool little car that was a laugh to drive, but the Pinto never ran quite right and just wasn’t making enough power. So after a while I started looking into options to swap the ageing powerplant for something more modern.”

After some in-depth research into what was available, Rob decided a 2.0-litre 16v Zetec from an ST170 was the way forward. Not only would it be more powerful than the Pinto – especially when tuned – it would be more reliable and useable too, especially with a set of electronically-controlled individual throttle bodies instead of the Webers. 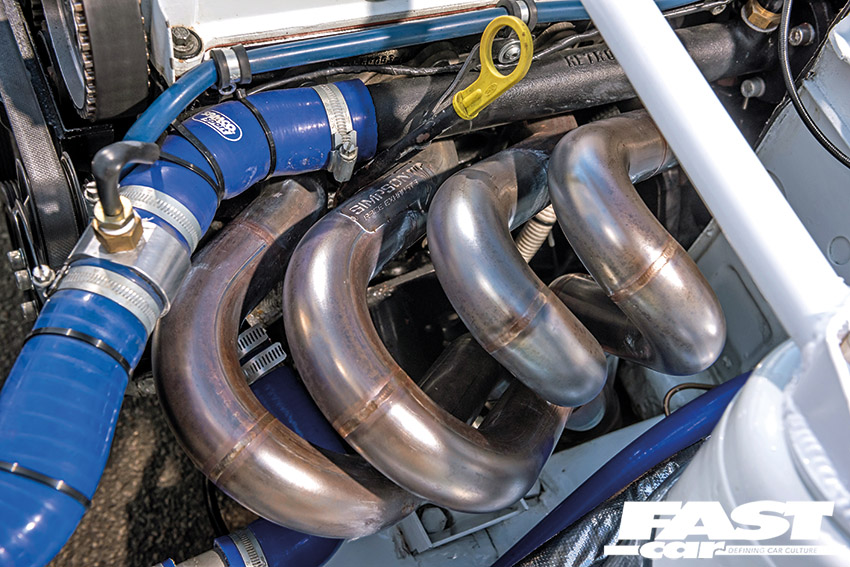 Rob explains, “I picked up a Zetec lump via Facebook Marketplace from a guy who was breaking his ST170, and dropped it into the Mk1’s small engine bay. The basic engine fitted, but when I started looking into throttle bodies I realised the usual options for this engine wouldn’t fit as they would foul the bulkhead, so I had to look back to my two-wheeled roots to find an alternative.”

Rob found what he was looking for in the form of a set of 44mm ITBs from a Kawasaki ZX10R, which he bought from Dan ST Performance Engineering, who specializes in converting bike throttle bodies to run on the Zetec engine. Rob also sourced an ME221 standalone ECU from Motorsport Electronics to run the new setup and uprated the whole fuel system with a large boot-mounted aluminium tank complete with swirl pot and high-flow Bosch 044 fuel pump, a necessary upgrade due to the new engine’s greater thirst for super unleaded. 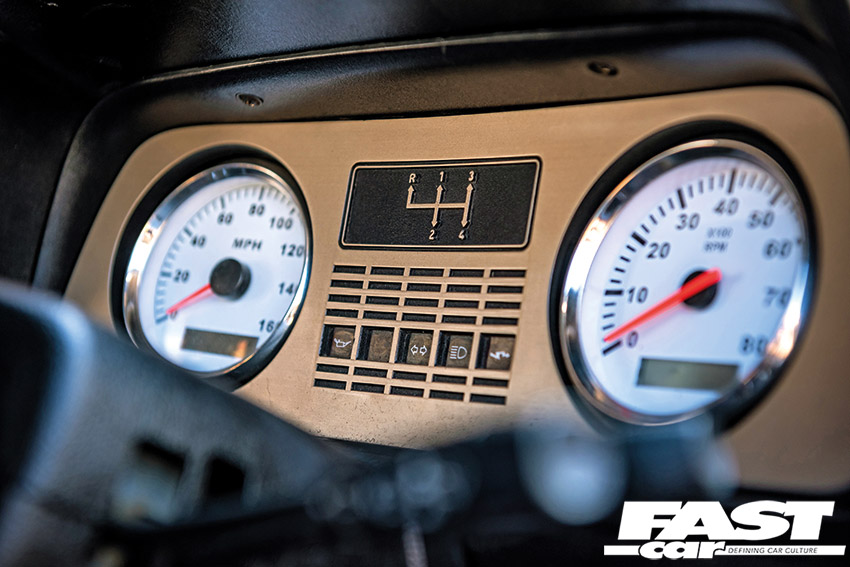 Rob recalls, “Once everything was plumbed in, we had a base map loaded on remotely and tried it out. Unfortunately, something wasn’t right with the new engine and the map blew it up. I was gutted but vowed to build it back up again even better than before.”

Rob bought another ST170 engine, and this time did his due diligence and stripped the top end to check that everything was in top condition before rebuilding with new seals and gaskets. 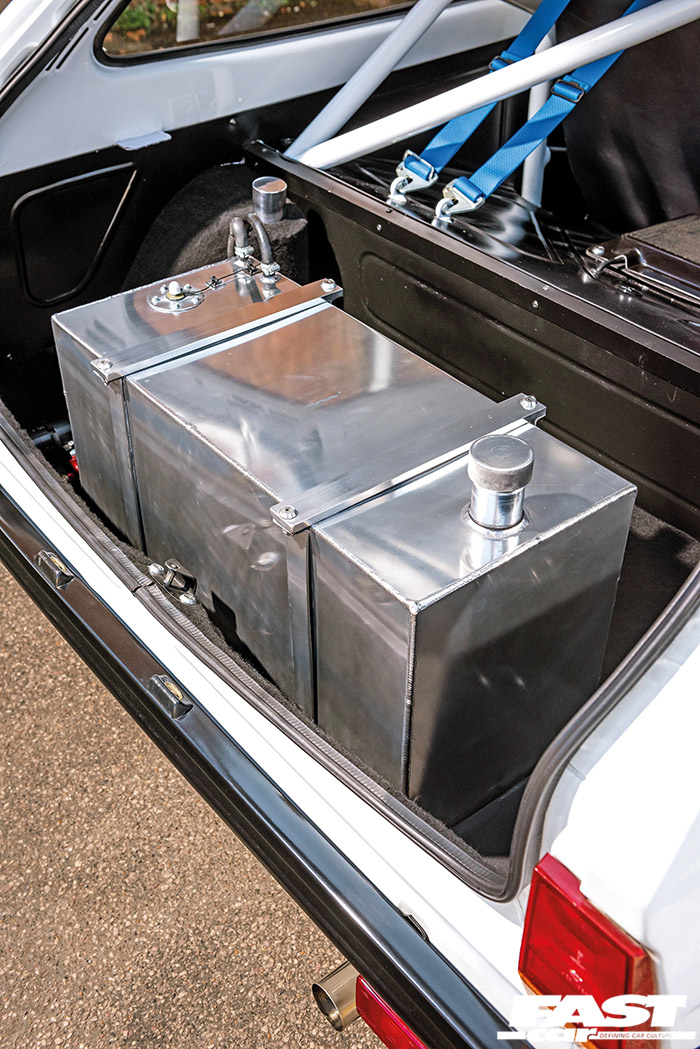 He remembers, “This time I planned on doing it right and not leaving anything to chance, and it seems to have paid off. Although I do have a third engine that I’m keeping as a spare, just in case.”

The new motor was then fitted with a new custom exhaust system and manifold fabricated by Simpson Race Exhausts before being mapped by Dan ST Performance Engineering in Shipley. It made a whopping 193bhp on the dyno, a figure that shocked even Dan himself.

“With the throttle bodies and super lightweight flywheel, the engine is super responsive,” says Rob. 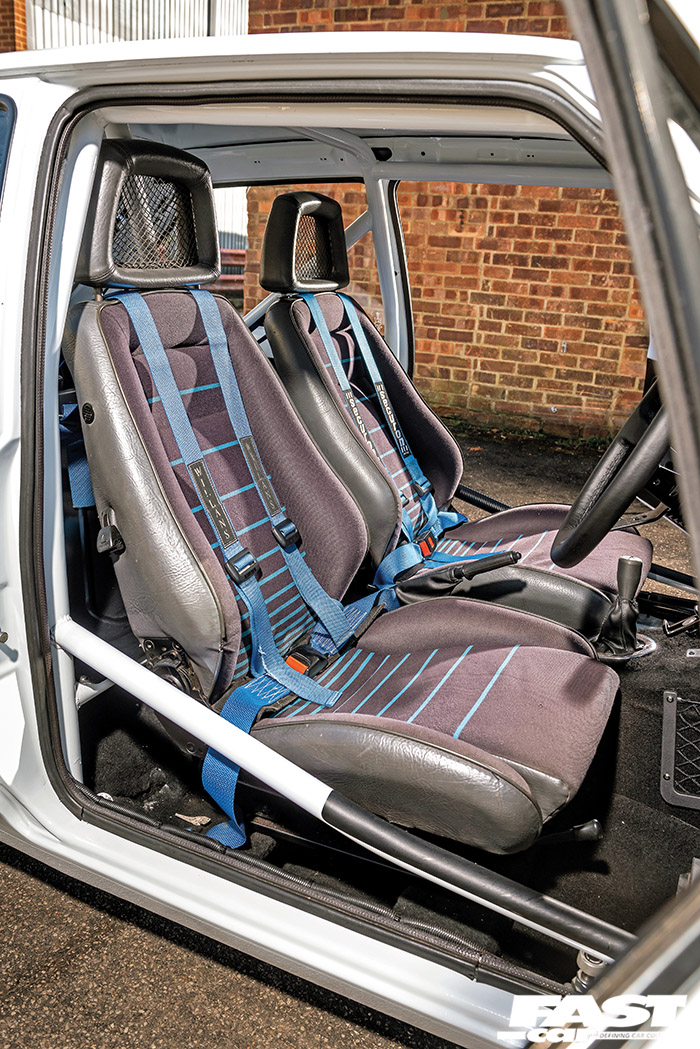 But don’t go thinking this is just a hoon machine to be enjoyed solely on the track, as Rob has introduced some creature comforts into the Fiesta to make it more agreeable and useable on the highway too.

The bucket seats were removed and replaced with a pair of Capri recliners with fishnet headrests on RS Turbo subframes. These less-aggressive posterior perches are not only more comfortable than the fixed buckets, they add an element of retro style to the otherwise motorsport-inspired interior.

Rob says, “I also added a rally heater box to make the interior warmer and help clear the screen on cold mornings. It’s important to me to keep the car as useable as possible so I can take it out as often as I can.”

But even though Rob has ensured his feisty modified Ford Fiesta Mk1 can happily trundle down to Tesco for the weekly shop, the focus of the build is still very much on having fun on and off the track, with the suspension and braking components uprated to suit any and all occasions. 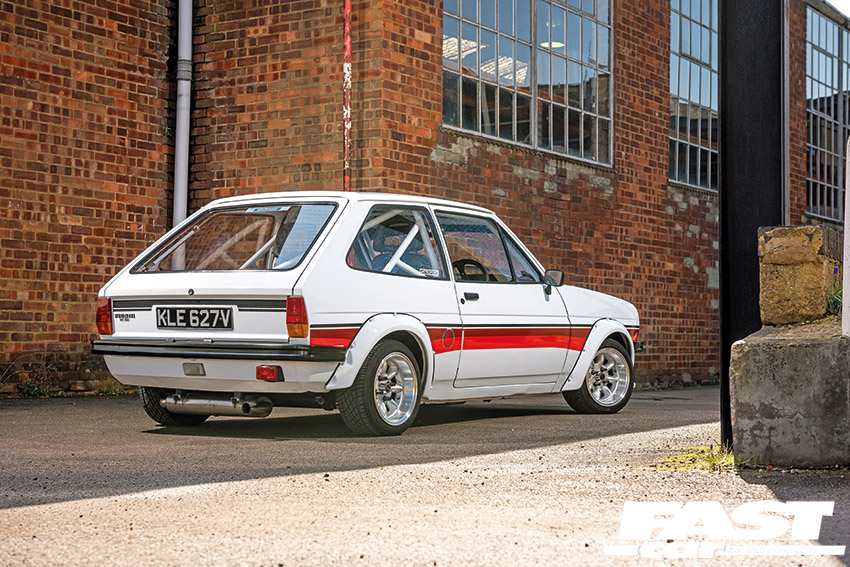 Bringing the 7x13in deep-dish Maxilite alloy wheels closer to the rally-inspired wide arches is a pair of Capri-sourced front struts that have been converted to coilovers with adjustable Gaz inserts. They are attached to Mk2 Escort adjustable control arms, while the rear has been treated to a four-link setup with an adjustable panhard bar and another pair of Gaz coilovers.

Rob grins, “The way this car handles is all about having fun. It’s a wild ride with all that power going to the rear wheels. If you’re not careful it’ll easily swap ends on you and send you into a hedge. Sometimes I’m sure it’s out to kill me.”

Keeping Rob alive and out of the scenery are Sierra RS Cosworth brake discs with vice-like Wilwood callipers clamping onto the fronts. A Wilwood brake pedal box with dash-mounted bias adjuster completes the stopping setup.

But if you think Rob has any worries about driving his bucking bronco of a modified Ford Fiesta Mk1 to the limit, then you’d be way off the mark. In fact, he’s got plans to add a turbo into the mix in the future, which will transform it from a bit of an animal to an outright monster.

And that’ll be one adrenaline rush that even the most exotic two-wheelers can’t beat.