Two mates, loads of banter, a modified Ford Escort RS Cosworth Monte Carlo and a Sierra RS500 Cosworth with a combined 1000bhp… this should be fun!

It’s not often you see a Sierra RS500 and a modified Ford Escort RS Cosworth Monte Carlo on the road together. Even less so when both are tuned almost identically, and have been owned by the same mates for twenty years. Twenty years!

In that time, most ‘known’ cars come and go from the scene, and sadly some friendships come and go too. But for Costas Costi and Bruce Saunders, the cars and the banter are still on top form after all that time. “If it wasn’t for me, Costas would be driving an Evo,” laughs Monte owner Bruce, “thankfully I managed to talk him around and keep him in the Ford family”. “Well, he only modified his Escort because he couldn’t keep up with my old Renault”, chimes in RS500 owner Costas. Both nod jokingly, and it becomes obvious these two are great mates who really respect each other’s cars. So where did it all start? 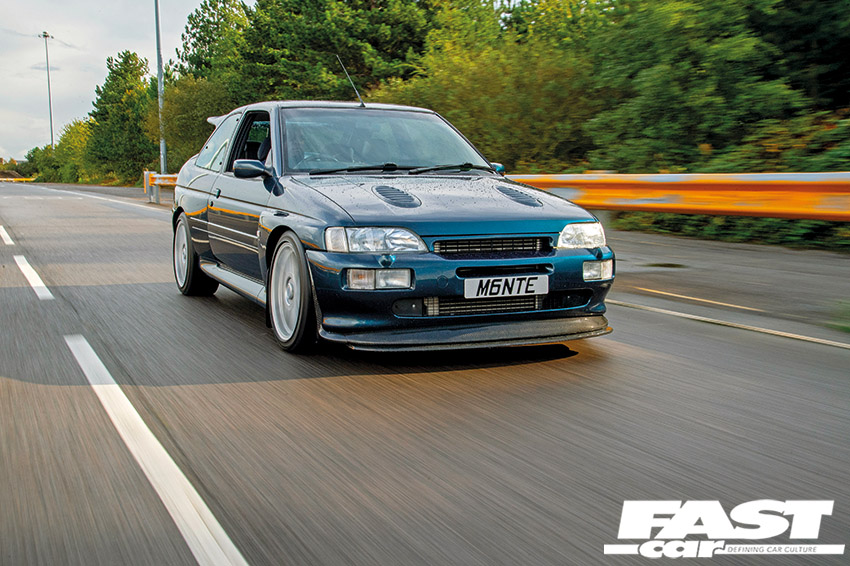 “I’ve always been a Ford man” continues Bruce, “I’ve worked at Ford Dagenham for 34 years, and before the Monte Carlo I had an Escort cabriolet with an RS Turbo engine”. As was rife back in the day, the cabriolet got stolen and torched, but with the insurance money came an opportunity for Bruce to upgrade. “This Ford Escort RS Cosworth Monte Carlo was owned by a rich guy with three other Escort Cosworths, as well as BMW M3s and the like… his wife wanted to make room for a Z3 so one of his Escorts had to go!”

Thus, in 1997, Bruce drove off in an almost new, mint Monte Carlo for… wait for it… £24,000. A lot of money back then, but if we all knew then what values would be like now, we’d have bought loads of them! The car stayed standard for a while, until one night he found a black French hatchback glued to his rear bumper. 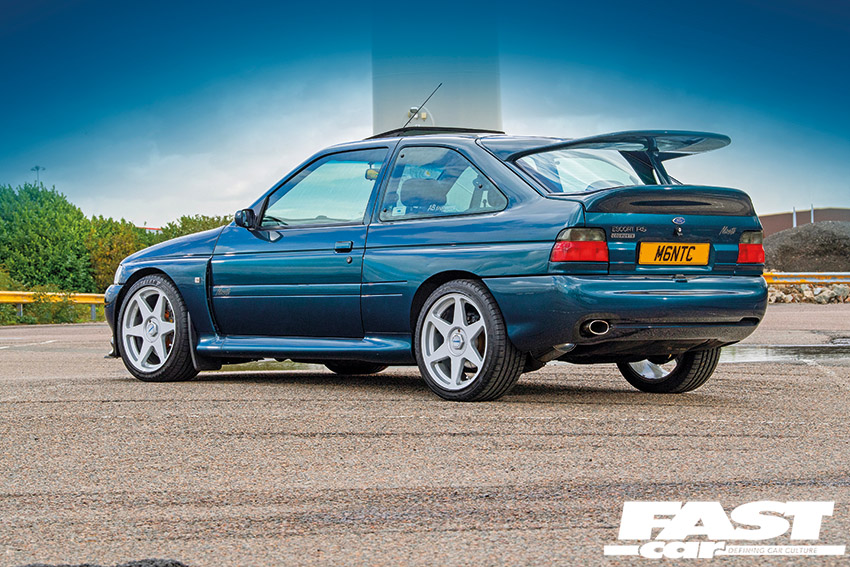 “I was heavily into Renault 5 Turbos” explains Costas, “I knew Bruce by then and it was all good fun, because the Renault had 200bhp and was all over his Cosworth like a rash.” Luckily, Bruce was friends with a certain Ahmed Bayjoo, and for him there was no other person to help cure the embarrassment. “I’d known Ahmed since I was 17,” Bruce explains, “we worked with each other at Grays Tyres on Romford Road, when I was an afro-haired teenager and Ahmed wasn’t much older”. Since the tyre shop days, Ahmed had toured the world and enjoyed an amazing career with Ford Motorsport, and for many he had become the Cosworth guru.

“He was certainly our guru,” they both agree, “and a good friend too… there’s a lot of tuners on the Ford scene, but Ahmed was different – he was a true Engineer”. With Mr Bayjoo tweaking Bruce’s modified Ford Escort RS Cosworth Monte Carlo up to 350bhp, the Ford was back in front, so much so that Costas finally admitted defeat, sold the GT Turbo and bought an Escort of his own. “I was disappointed with it though,” he remembers, “going from the Renault to the Cosworth was like jumping out of a fast go-cart into a wallowy, slow bus”. 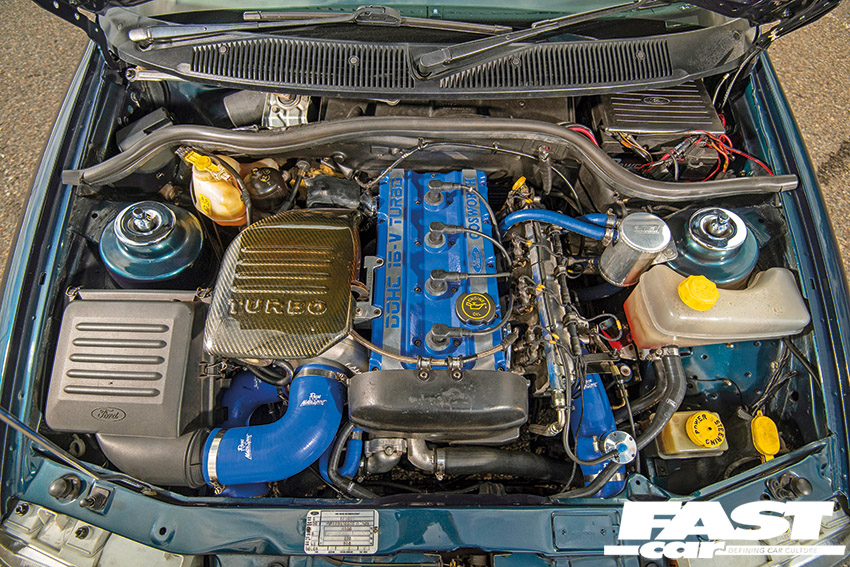 Fate would play a hand in both men’s Ford stories and take the levels up a notch, when Bruce was taken for a spin in two Grove Garage / Ahmed tweaked cars – an Escort Cossie with 500bhp and a certain Sierra RS500 Cosworth, also with 500bhp. “They were absolute animals,” he remembers vividly, “I’d never been in anything like them, so I booked in my Escort to have the same work.”

Shortly afterwards, the RS500 came up for sale and Bruce was straight on the phone to his old mate. “I actually wanted the Sierra RS500 for myself,” admits Bruce, “but I couldn’t have both so I urged Costas to buy the Sierra and keep it in our crew.” A test drive was conducted, and Costas was suitably blown away enough to part with… wait for it… £20,000! “The test drive was exhilarating”, laughs Costas, “it was so well put together, not just in terms of power, but it handled superbly and was all round the best car I’d ever been in”. 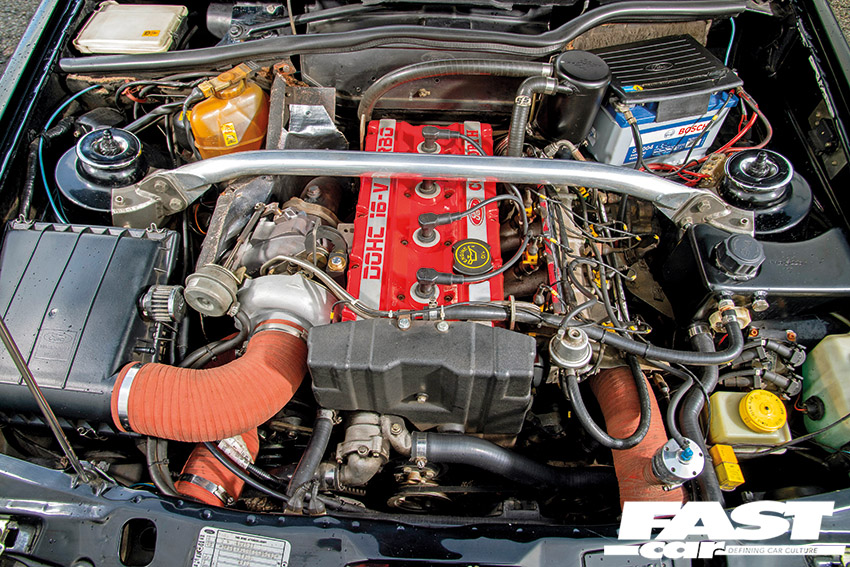 Both of the Ford Cosworth YB engines are built to a tried and tested Ahmed spec – long studded block, T4 turbo, eight injectors, ported head, uprated cams and over 2-bar of boost. In today’s world of alloy blocks, 1000cc injectors and Borg Warner turbos, some might say these are quite ‘old school’, but in our experience a lot of these types of set-ups built years ago, still produce the goods today and are also very reliable.

“The engines are pretty much unchanged since then and they still hold their own,” agrees Costas, “but they were originally on Weber ECUs, and when Ahmed put his favoured Pectel T2 on, I must admit it made a huge difference to driveability”.

“People say T4 cars are laggy,” chips in Bruce, “but they’re not, it’s all about how they’re mapped – these cars have 400lb/ft of torque from 3000rpm to 8000rpm, because Ahmed carefully specced the engines to give accessible performance rather than just peak power”. 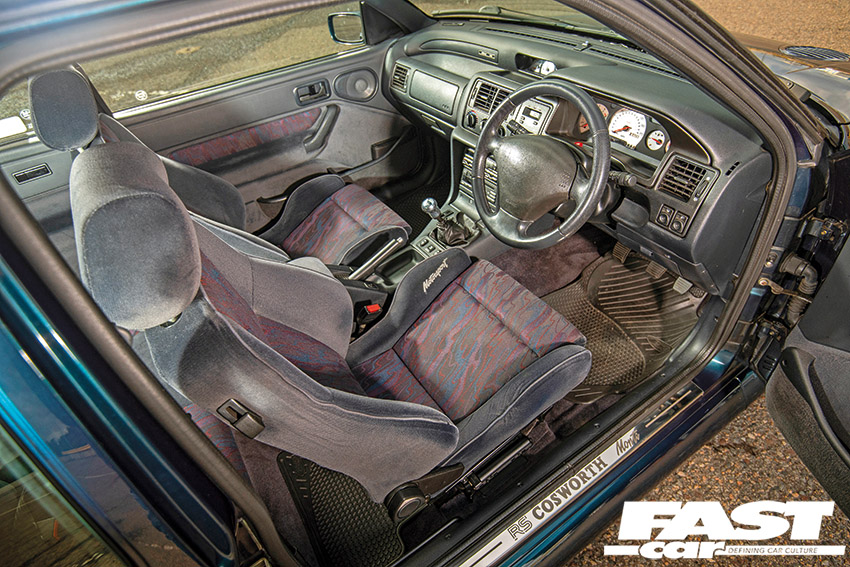 It won’t surprise you to learn all of this torque caused merry hell for the Escort’s transmission, and although the differentials have been fine since the addition of a front diff strengthening plate, the gearbox hasn’t been so lucky! “I’ve been through quite a lot of them, including a straight cut box which kept killing third gear,” Bruce points out, “it wasn’t until Ahmed sourced me a Pete Doughty box with 2wd ratios instead of 4wd ratios, that it’s held together ever since.”

Apparently the 2wd ratios offer a longer 1st and 2nd gear, so the weaker 3rd gear isn’t used quite as much and therefore escapes some of the abuse. Certainly, it’s worked for Bruce, both on the road and the track.

Yes, we said track. For some people, the prospect of taking a genuine, mint RS500 and modified Ford Escort RS Cosworth Monte Carlo on track is crazy, but for these two it’d be a crime not to. 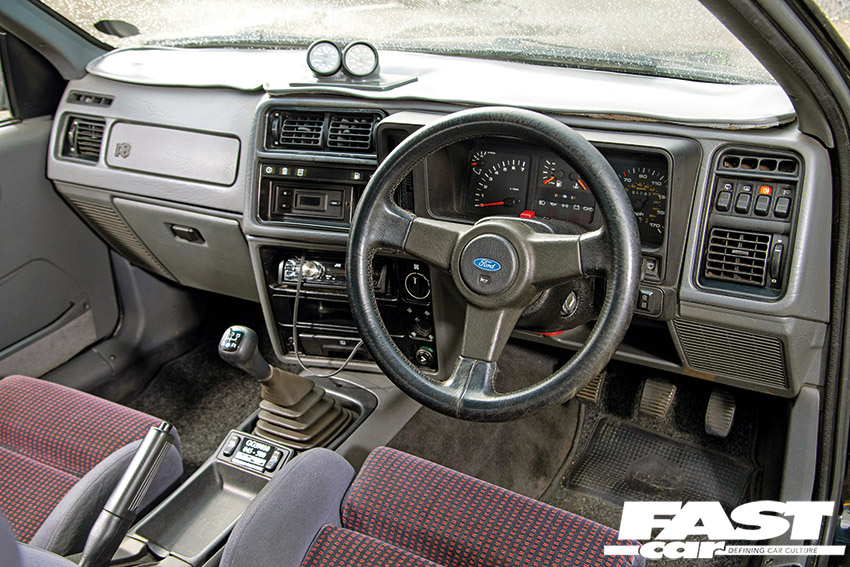 “All people want to do is clean them”, jokes Bruce, “life’s too short, and these cars give the biggest adrenaline rush when they’re used properly.” “People say they’re worth too much”, adds Costas, “but we’ve been doing track days for twelve years and try to do at least two a year – Snetterton is our favourite as it’s pretty forgiving on the driver, and it has long straights to really stretch the cars legs”.

But which is quickest?! “Honestly, there’s absolutely nothing in it between them”, both agree, “they both have Ahmed’s six degree rear beam which completely transforms the handling and grip, they both have   and they’ve both got the big brakes.” Costas’ Sierra needed the 16in front wheels machining, and 12mm spacers installed in order to clear the discs, but this gave much better results than fitting 17s all round.

“I did buy new 17in Compomotives,” he remembers, “and when I put them on the car it was tramlining over the road and handling so much worse than the 16in front and 17in rear combination. I swapped back pretty quickly – it was the only time I hadn’t listened to Ahmed, and I never made that mistake again!” 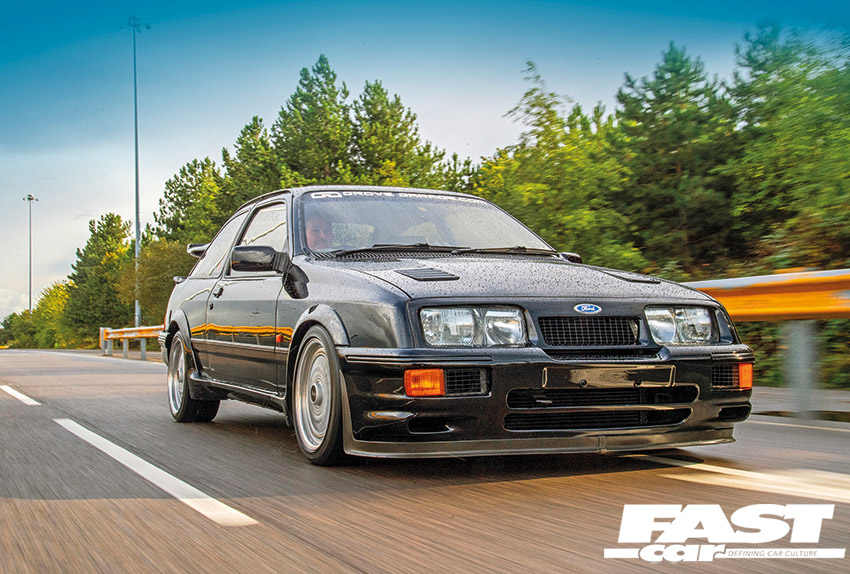 Both men remember their friend fondly, and their cars offer them a permanent reminder in motion of the good times they all shared during the build, and of their adventures on road and track. “Our relationship with Ahmed still lives on in the cars, and in our friendship with the guys at Grove Garage,” reflects Bruce, “we all used to meet up there and spend hours on Saturdays putting the world to rights, as well as shutting the shop to all enjoy the track days together”.

“Both cars have been engineered by and put together the right way by Ahmed and Grove,” adds Costas, “my last memory of Ahmed was when he drove Bruce’s modified Ford Escort RS Cosworth Monte Carlo on a track day – he left me for dead!”

So, with all these precious memories, what about storing the cars away and pampering them? “The day we put these cars in a bubble,” Bruce continues, “is the day we sell them… and we’re never selling them”. “We’ve spent years getting them to do exactly what we want them to,” adds Costas, “they’ve been on the scene a long time, and they always will be.” 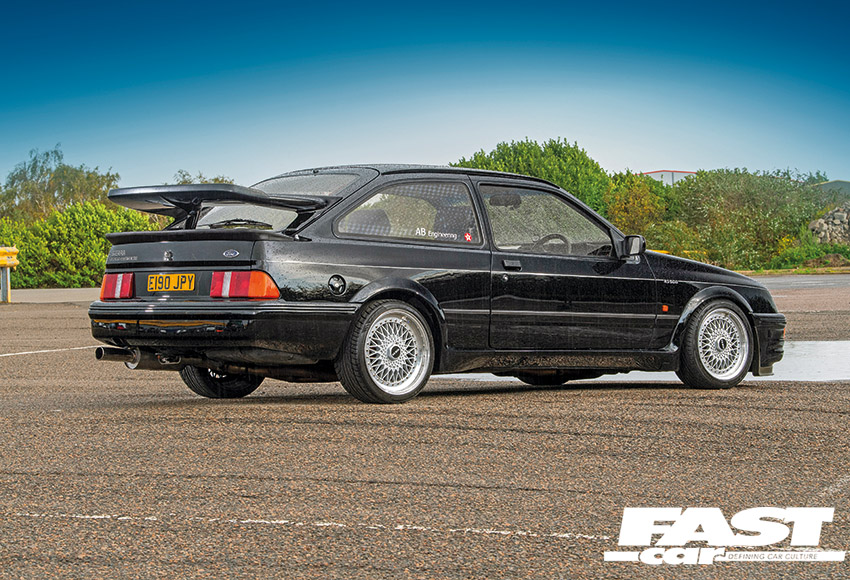 Uprated speakers hidden behind original grills and 8in sub in the boot, boost and oil pressure/temp gauges in custom pod, aftermarket stereo for hands free and USB, dashboard sun protector