This stunning 500bhp, rear-wheel-drive weapon is the result of one young lad’s all-consuming ambition to own a modified Ford Escort Cosworth.

I still remember it like it was yesterday,” says Adam Faver as he tells us where his Ford Escort Cosworth obsession began. “I was 12 years old, walking in a local village, and all of a sudden the loudest and fastest car I’d ever seen came blasting past me. It literally stopped me in my tracks, and my mind was completely blown.”

Inspired, young Adam found out that the car in question was called an Escort Cosworth, an Imperial Blue one to be precise, and from that moment on he embarked on a single-minded mission to own his very own. 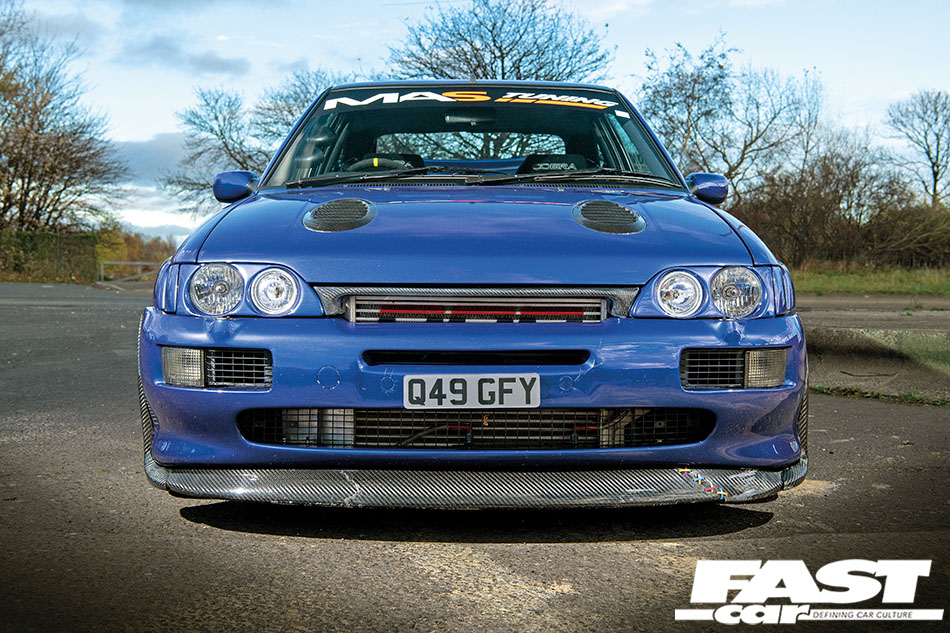 He says, “From that day onwards I started buying all the car mags religiously, and honestly my whole life has been geared towards achieving that boyhood dream. Young kids go through fads and phases of different hobbies and desires, but all through my childhood and adult life I was deadly serious and focused on what I wanted.”

During these years of working and saving money, two things happened. First, Adam became heavily influenced by the modified car scene, the wilder and more unique the better. Second, Ford Escort Cosworth values sky-rocketed. Both of these factors played a role in his decision to think outside the box when it came to finally buying a car. 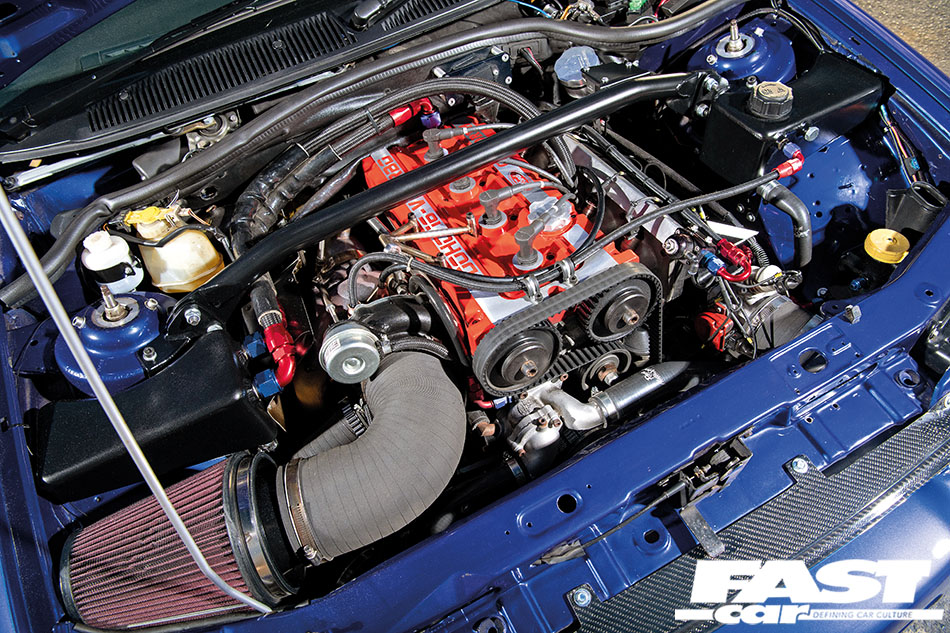 “I came across this as a completely bare shell,” explains Adam. “It was an affordable route into ownership and there was no point in me buying a really nice complete car for £50k just to strip all the parts off and replace them. It just didn’t make any sense to do that.”

This modified Ford Escort Cosworth has an interesting history. It was stolen and recovered in the 1990s, as many were, and a racing driver bought it from the police auctions as a spare shell for his rally car. He never used it, though, and sold on it to someone who sold it on… And that was the theme for the next few years of the car’s life.

As it kept getting transferred to new owners, the already threadbare shell lost more and more parts until Adam rescued it, when it was a bare skeleton with two doors.

He laughs, “People thought I was mad to take the project on. When these things get stripped for parts it seems lots of nuts and bolts and clips simply get tossed in the bin, so I was permanently on eBay, as well as owners’ club forums, not just looking for running gear and other big stuff, but for thousands of little pieces too… It was a nightmare, but I never once got distracted from the goal.”

Somewhat sensibly, he bought a basic Mk5 Escort donor to rob for parts, and alongside his mechanic friend he did a great job of building the Cossie back up in his garage, in a mere 20 months. 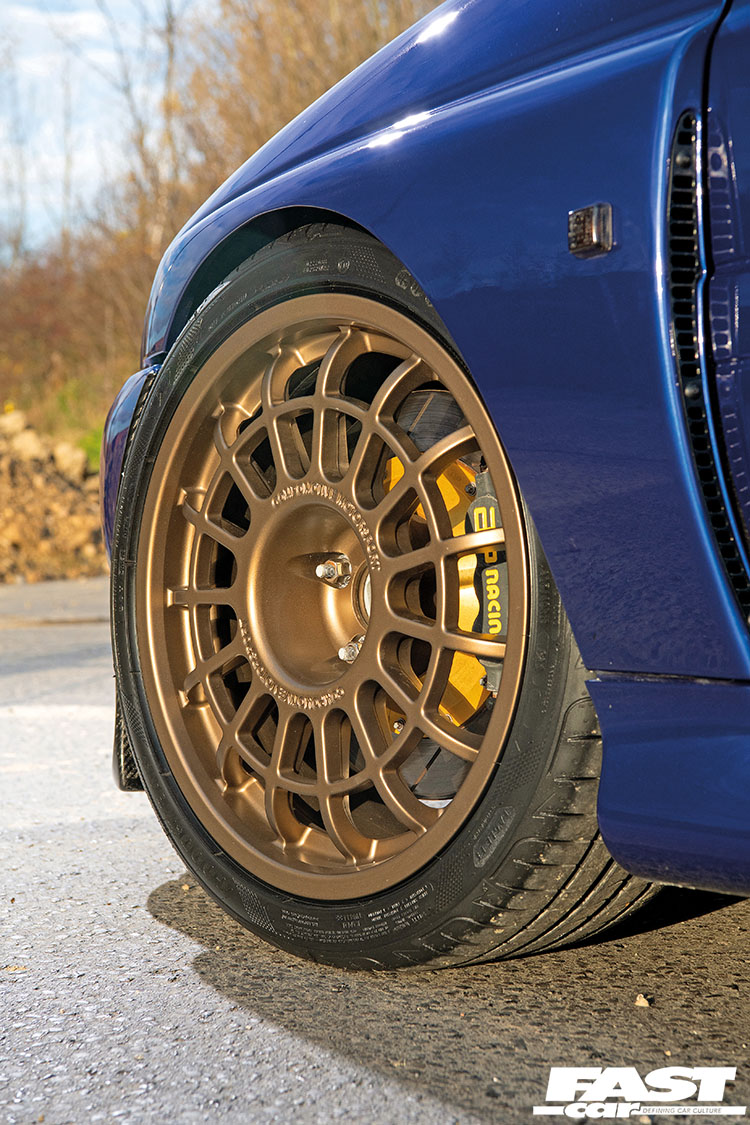 Adam explains, “We used manuals for guidance, and asked people to take pictures of their builds so we could work out where everything went. I’d never seen inside an Escort Cosworth before, let alone put one back together, so our learning curve was basically vertical.”

With all that effort comes reward, that being the massive buzz Adam experienced when driving the car for the first time. Not least because he’d made it identical to the Escort he’d seen all those years ago: Stage 3 power, whale-tail, Oz Super Turismo wheels and – of course – gleaming Imperial Blue paint. Adam was in heaven, and this high lasted a year-or-so of enjoying car shows and sunny Sunday blasts before fate would take the Escort’s evolution to a whole other level. 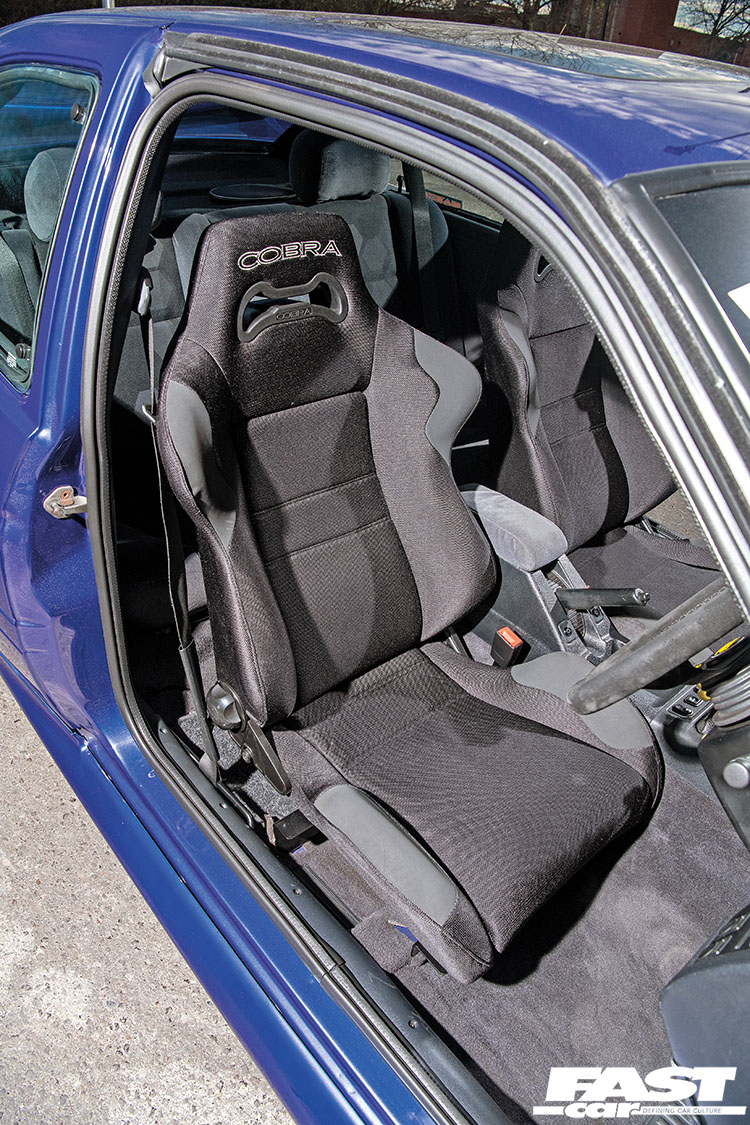 Adam explains, “The engine was getting a bit tired, and I had a chat with someone about checking it over. They’d helped me out with some unobtainable bits during the build and knew what they were talking about, so I hoped they could breathe some fresh life into the old YB.”

That someone happened to be Mike at MAS Tuning – a Cosworth specialist who has built more than his fair share of big-power Escorts, so it was no surprise that once the car entered his Crewe workshop it was never to be the same again (in a good way).

Mike’s diagnosis was that the engine needed a full rebuild, and when he told Adam, the pair started to open up the Pandora’s box of Cosworth tuning. 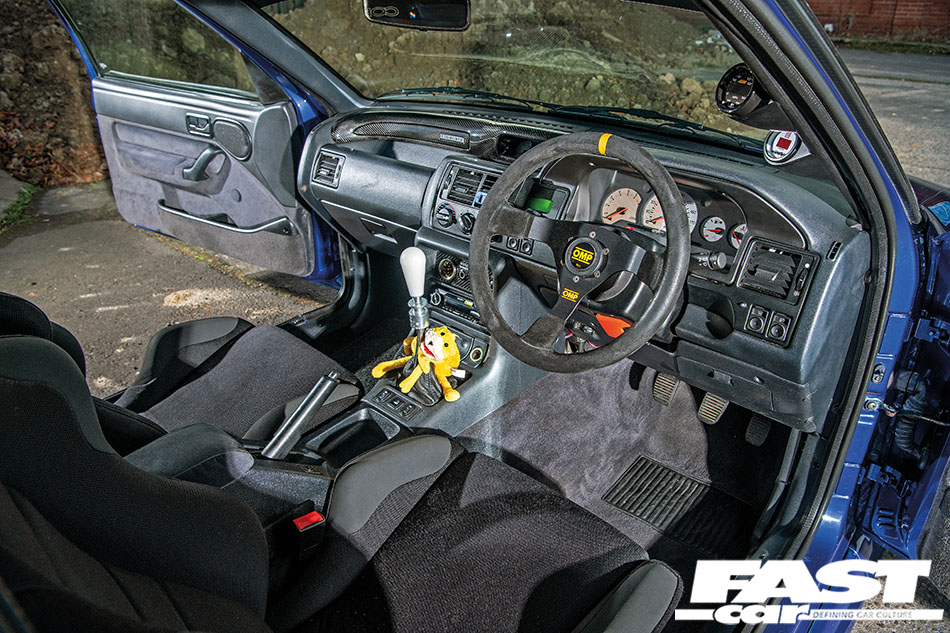 “One of Mike’s customers was selling a freshly built, long-studded, Nikasil-linered block,” recalls Adam. “They’d bought a Smith and Jones alloy block for their race car, so the 200 block was just sat on Mike’s bench. It seemed too good an opportunity to pass up.”

Anyone who’s owned a Cosworth knows what came next – the we-might-as-well spiral.

“With the block capable of big power, we thought we might as well treat it to an appropriate touring car-spec head and cams, a nice GTX turbo, and before you know it I was going from a 300bhp Cossie to a 500bhp one,” laughs Adam.

He wasn’t laughing for long, though, because big power in a 4×4 Sapphire or Escort requires big investment into the transmission without it breaking into smithereens every time you tickle the throttle. 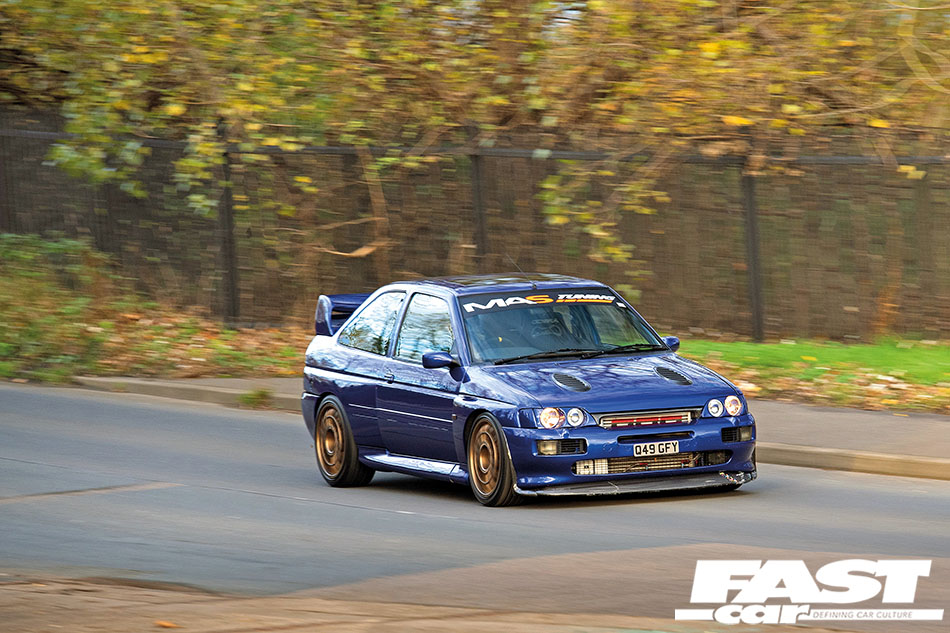 Adam says, “Gearboxes, front diffs, rear diffs… To properly kit out an Escort for 500bhp you’re into five figures. That could have been a bit of a worry, but Mike came up with a great solution.”

One of Mike’s other customers had a 4×4 Sapphire fitted with a trick rear-wheel drive sequential gearbox from Elite and a diff complete with plated LSD and 3.9:1 crownwheel and pinion.

“The guy wanted his tuned Sapphire Cosworth converted back to standard with 4×4 running gear, so Mike brokered a straight swap,” explains Adam. “My Escort’s 4×4 running gear in exchange for his trick RWD parts. It was a no-brainer for me, not just from the perspective of bullet-proofing the car basically free, but also in terms of the extra fun of rear-wheel drive.” 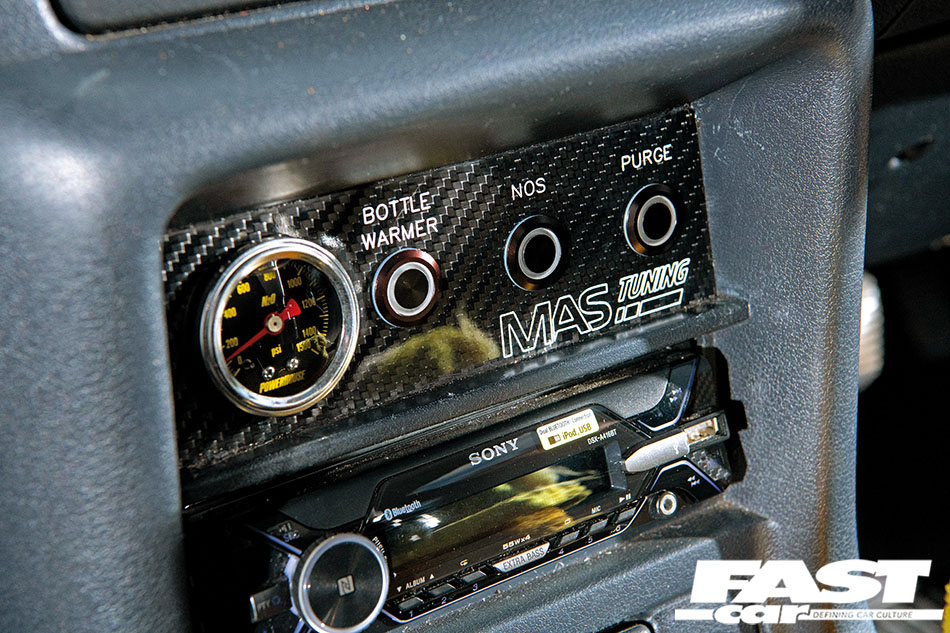 Thankfully, Mike also advised on uprating the suspension and stopping power, so while the powertrain and drivetrain transformation was happening he fitted AP Racing six-pot callipers up front, four-pots at the back with big brake discs at each corner, plus a set of coilovers to help control all of that horsepower.

The modified Ford Escort Cosworth hasn’t been dyno’d yet, but it’s been set up on the road and runs a 32psi peak boost pressure with 30psi held, so it’s sure to be knocking around the estimated 500bhp figure, and must not only be a hoot to drive but properly capable on track too.

Adam agrees, “It’s a completely different driving experience to its first incarnation. With the engine and sequential ‘box, it’s transformed from a quick road car into a hard, raw track animal that bombards every one of your senses. It’s hard to describe, but it’s buzzing with energy and rawness.” 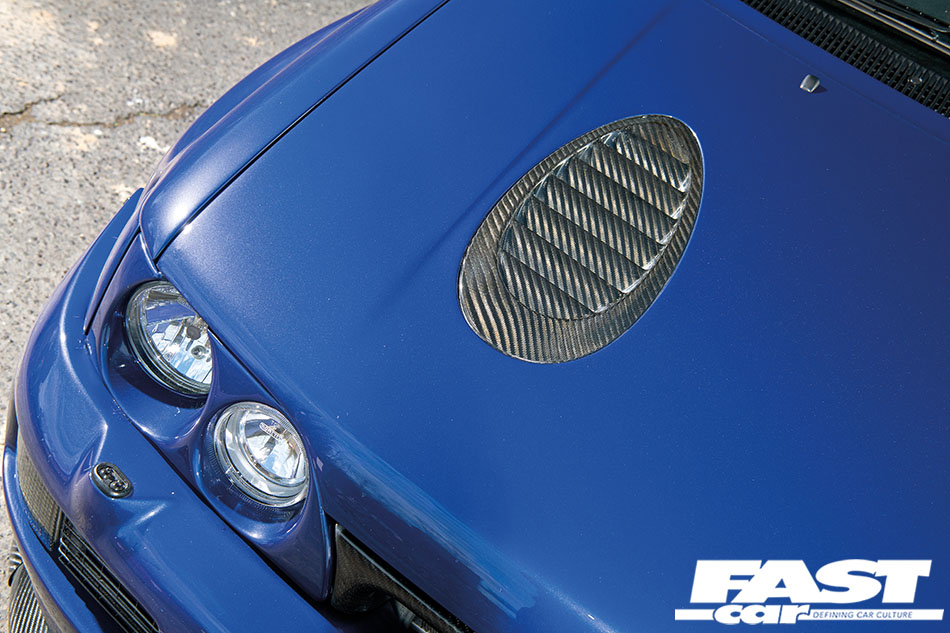 If it comes across like Adam has a reaffirming life experience every time he turns the key and plants his right foot, it’s because he does. Just think about the journey he’s been on. It’s really quite special, because not only is the end result utterly wild but the levels of sentimentality attached are vast. “

He says, I still have the A4 scrap-book that I started filling with magazine cut-outs and pictures of Ford Escorts as a boy, and that I continued to refer back to for ideas whilst building the car.

“I was always inspired by the most bonkers and highly specced cars like Martin Hadland’s LOONY, Ian Howells’s white WRC-style Racetek car, and Stian Hafsengen’s blue car from all the Gatebil posters, to name a few. And you can see some of these influences in my build, such as the Compomotive wheels, WRC rear spoiler, bucket seats and Stack instrumentation. To have my own highly modified and unique interpretation of an Escort Cosworth after poring over pictures of these legendary cars for so many years is an absolute privilege.” 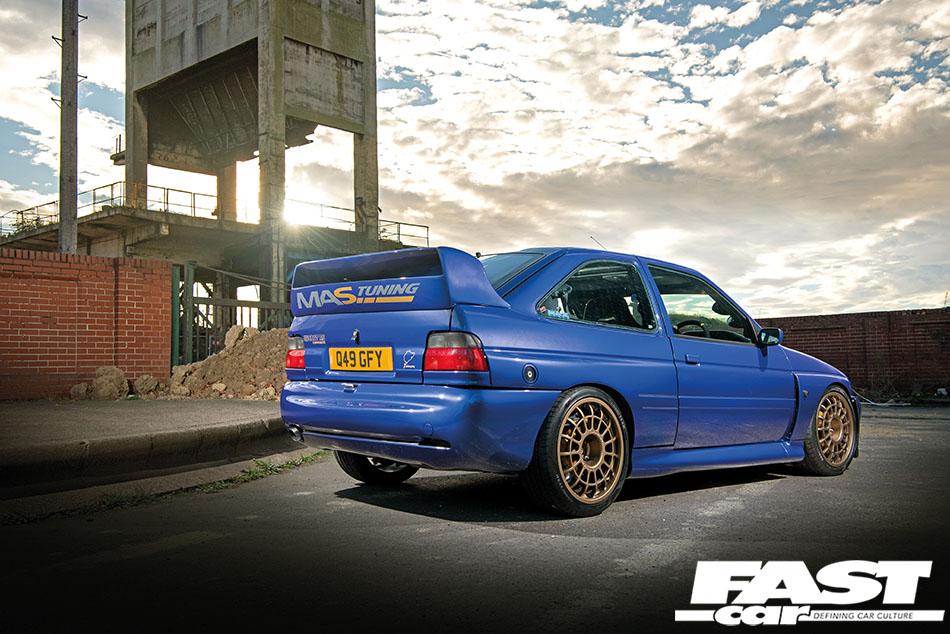 As we wrap up the shoot and the modified Ford Escort Cosworth fires into an off-beat edgy burble, we can’t help but imagine Adam going back in time and giving his 12-year-old self a passenger ride; what would the young lad say?

Adam chips in, “Well, people usually hear the sequential ‘box screaming up the road, stop, turn around, and you can see them thinking ‘what the F is that?!’ So probably something similar…”

One thing’s for sure: there will be a few young Cosworth fans putting this 500bhp, rear-wheel drive, sequential gearbox monster in their dream scrap-books today. And a few not-so-young ones too.