Upon finding himself growing up in the USA, how does a simple Cuban chap go from having nothing to owning a modified Ferrari F40? Simple: he puts a hell of a lot of work in…

It takes a serious amount of courage to mess about with a Ferrari F40. This isn’t just a car. It’s an icon. Something that adorned every bedroom wall throughout the 1980s, on through the ’90s and, realistically, still freshens up many an interior design concept today.

The archetypal retro supercar poster-boy, the F40 was Enzo Ferrari’s last sign-off, a celebration of the 40th anniversary of his first car, and a boisterous 90th birthday present to himself. The 2.9-litre engine with its twin IHI turbos produced 478bhp, which was all channelled entirely without electronic intervention through cartoonishly fat rear tyres. It was a real contender in the late-eighties supercar wars, able to hit 60mph in 3.9 seconds and top the mythical double ton. And it looked like a full-on race car (despite not actually being designed to race). It’s a legend. Everyone wants one, and anyone who says otherwise is a filthy liar. 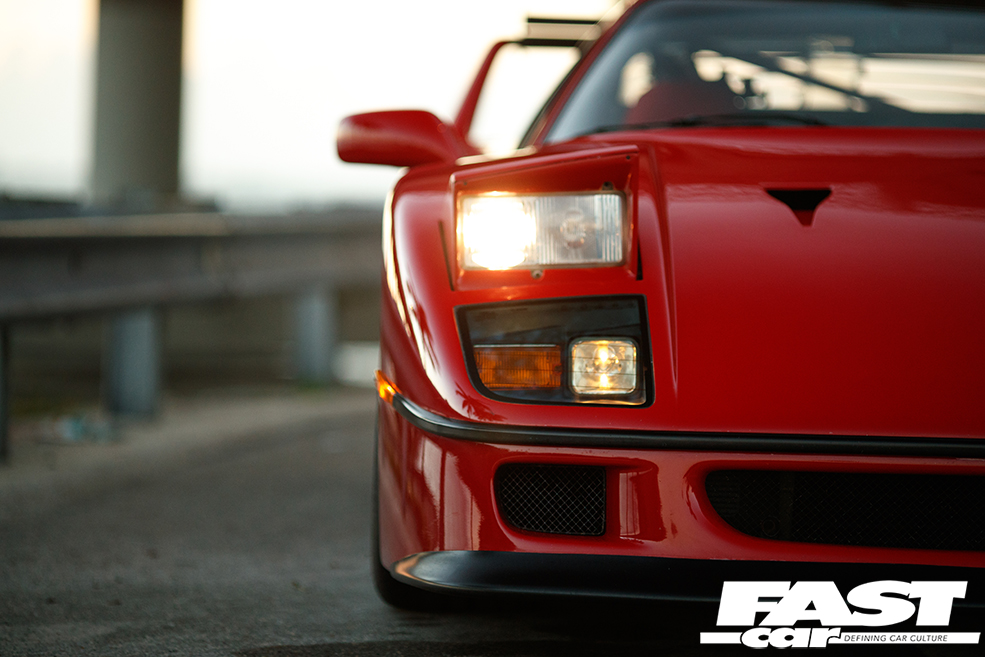 While not being specifically designed to race, however, the F40 LM proved that the platform could more than hold its own on track if you were sufficiently persuasive. The LM was an in-house Ferrari development to create customer cars suitable for endurance racing; the chassis was extensively reinforced with carbon fibre, while the already legendary handling was further improved by the addition of new Koni springs and dampers and thicker anti-roll bars. Larger 355mm Brembo brakes were useful given the power hike to 720bhp, thanks to increased boost pressure and compression ratio, bigger intercoolers, more aggressive cams and an all-new engine management system. 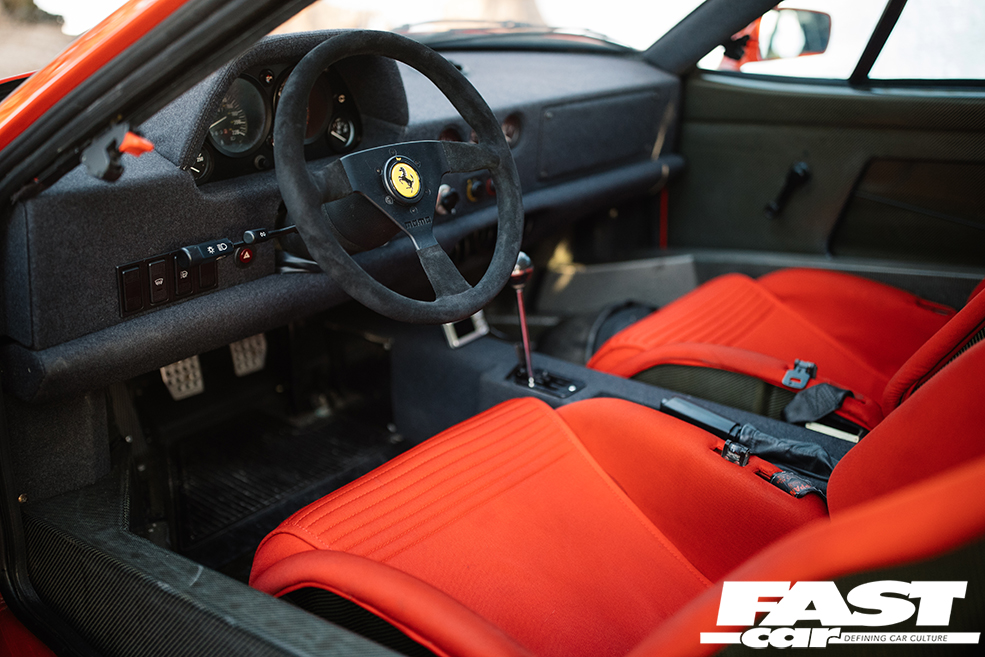 The model largely retained the stock road-car looks, although subtle addenda were added to aid both cooling and downforce – there was an extra little NACA duct on the nose and a discreet carbon-fibre chin spoiler, while the headlights sat behind Lexan covers instead of traditional pop-ups. And you see the hinged centre-section of the rear wing? That’s adjustable from the cockpit. Interior weight savings brought kerb weight down to 1,050kg. The Ferrari F40 LM was capable of zero to 60mph in 3.1 seconds, going on to 229mph. A mighty, mighty car. 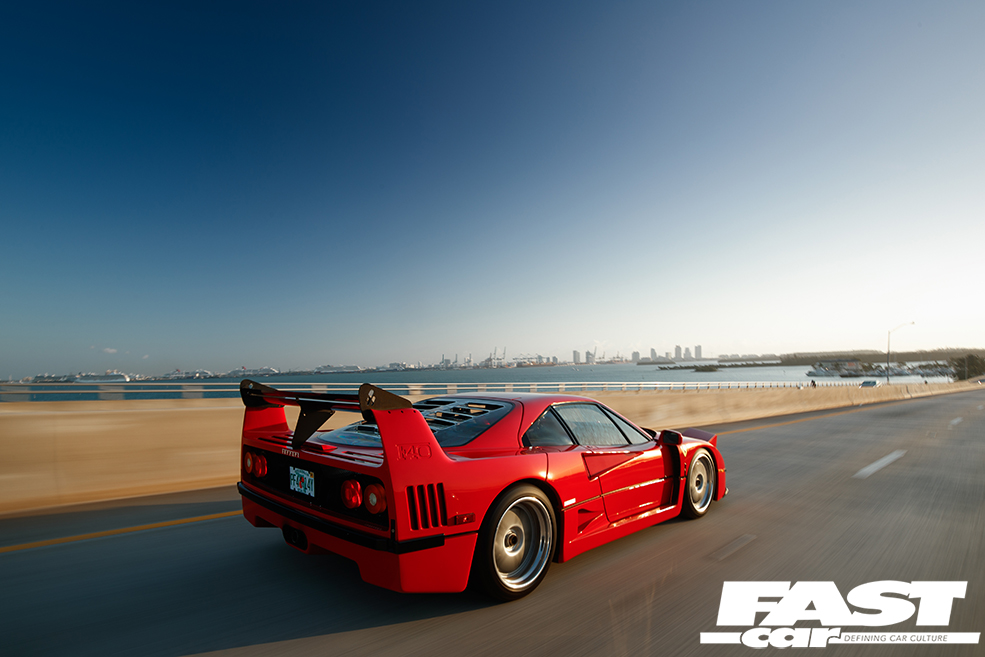 What you’re seeing here, then, is something special indeed: not an F40 LM. But an F40 that’s been extensively modified to incorporate its upgrades, its spirit, its sense of purpose. As if the stock F40 wasn’t an angry enough thing already!

You’ll be unsurprised to learn that the owner of this machine is a pretty special guy. You’d have to be, as the act of fiddling with perceived Maranello perfection is hardly a job for a shrinking wallflower. No, the man in question, Juan Carlos Fernandez, emigrated to the US from Cuba in the early 1960s, and if you know your history, you’ll know that this was a far from easy transition. 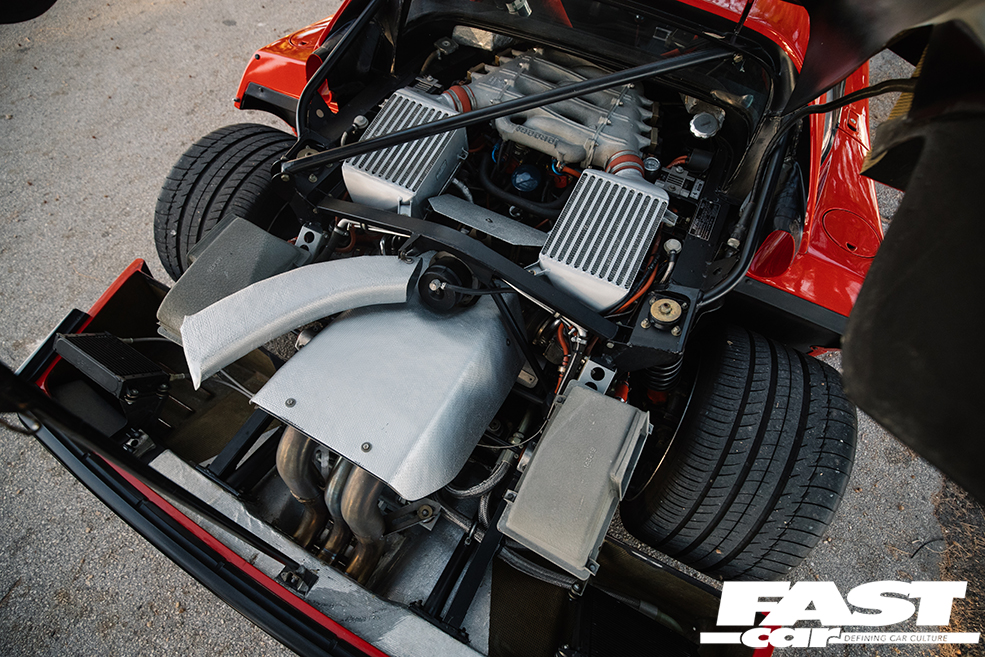 With the family starting from nothing in the Land of the Free, aside from a strong bond of togetherness and a pocketful of dreams, it was hard graft that pulled Juan up from that wide-eyed boy into the man he is today. He grew up eagerly admiring the muscle cars that the trade embargo denied his homeland, and vowed to own at least one of them someday.

Working hard selling shoes in his spare time while at college, Juan saved up enough readies to acquire a ’73 Datsun 260Z, and before long the modifying bug bit and he found himself bolting on Weber carbs, arch flares, racy manifolds and all sorts. Once that bug bites, its infectious wiles can really infiltrate your system. Juan was a bona fide petrolhead. There was no turning back. 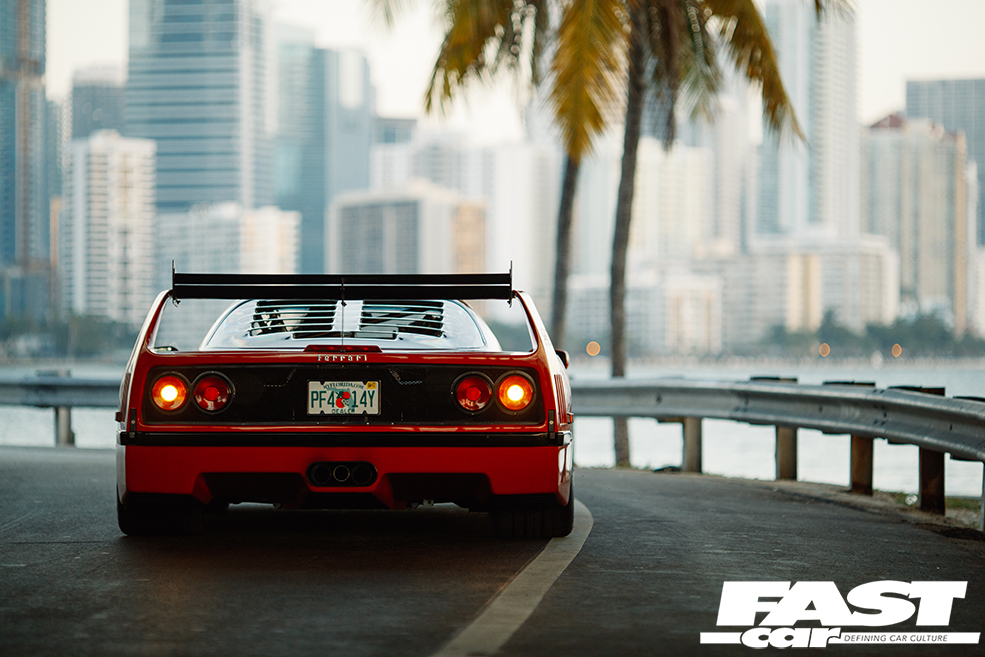 The next acquisition was a rough-and-ready ’68 Corvette, a car of such admirable simplicity that he was able to hone and learn his automotive craft, unbolting the broken bits, banging them with hammers, screwing them back on, and putting his foot down. Simpler times. 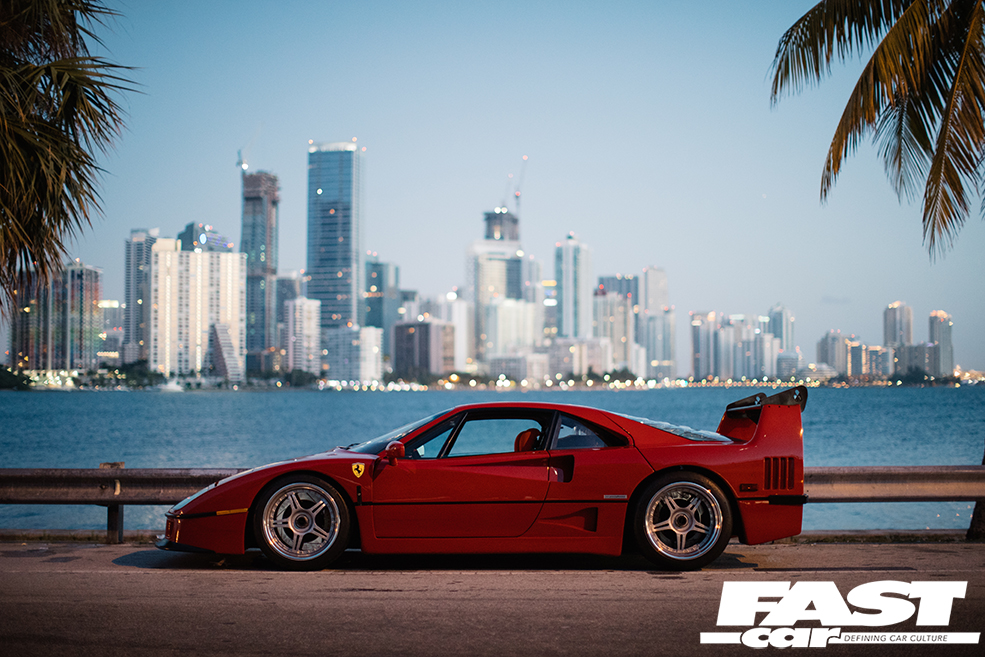 And then, one day, something life-changing happened. Juan saw an F40. A lightbulb illuminated cartoon-style above his head, and suddenly his impassioned automotive journey had a clear sense of purpose. Remember that scene in Wayne’s World, where Wayne’s eyeing up the white Fender in the guitar shop? “Oh, yes… it will be mine…”

So, how does an ordinary person go about purchasing a Ferrari F40? They’re hideously expensive, and surely out of the grasp of all but the most moneyed collectors? Well, Juan has a proven method: all you need to do is graft, and graft hard, 11 hours a day, seven days a week, for 15 years. Then the F40 door swings open just for you. Simple, eh? 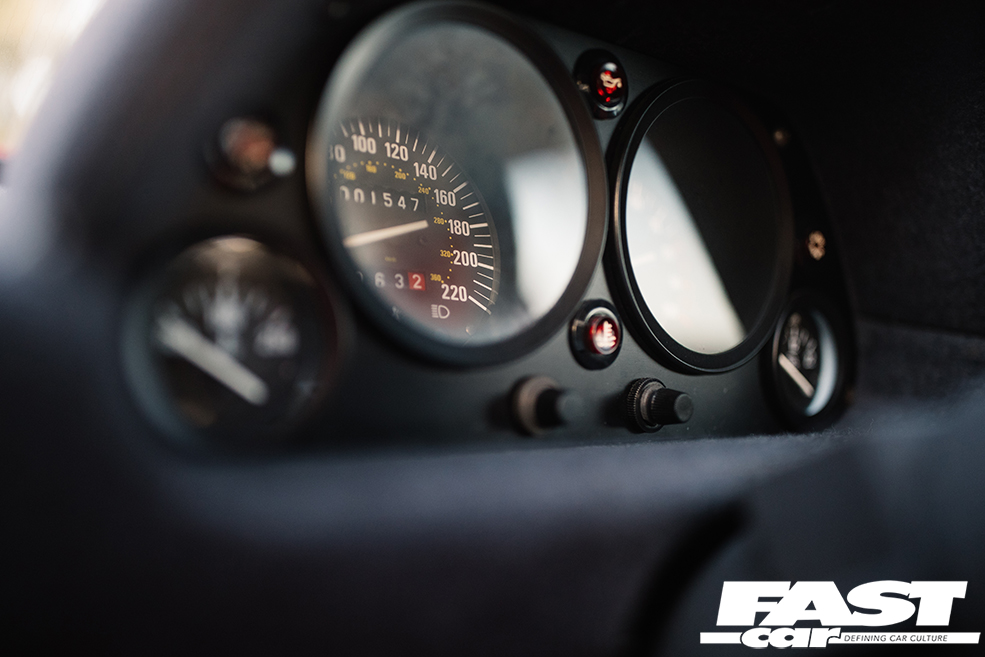 Impressively, it’s not all just about the fabled Ferrari F40 for Juan. He’s got a collection of around 50 cars now, something which his business selling used cars has helped him to build up from a base point of pretty much zero. But naturally it’s always been this Italian stallion that was the laser-targeted hope, the reason to get up in the mornings.

Having owned the F40 for around 15 years now, Juan’s been keenly modifying the thing but has been sure to only make reversible changes. He’s not an idiot. This hyper-rare poster-boy will be a nice little nest egg one day. Still, whereas most collectors like to mothball their investments, this dude has a far more pragmatic approach: this is a performance car, it was designed to be driven hard and driven fast, and that’s exactly what he does. To this end, he’s bolted on a bunch of period mods to make it even more exciting. 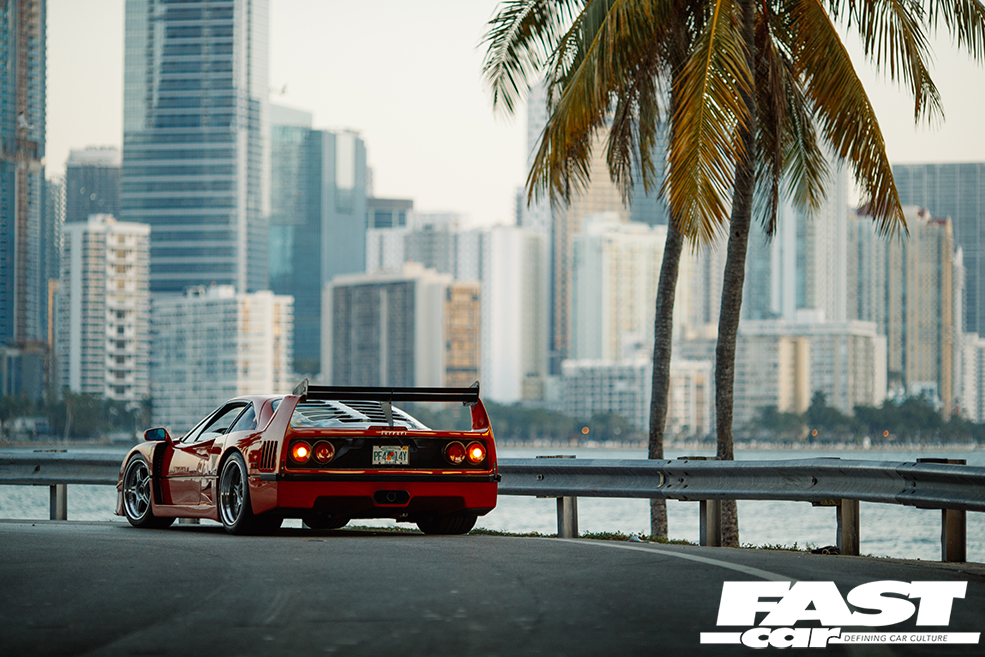 Working in conjunction with Costa Mesa, California’s Caribou Engineering, the original IHI turbos have been swapped for F40 LM units, working with a particularly shouty Tubi Inconel race exhaust, along with a custom remap and an HKS boost controller (those turbos are Japanese, remember). 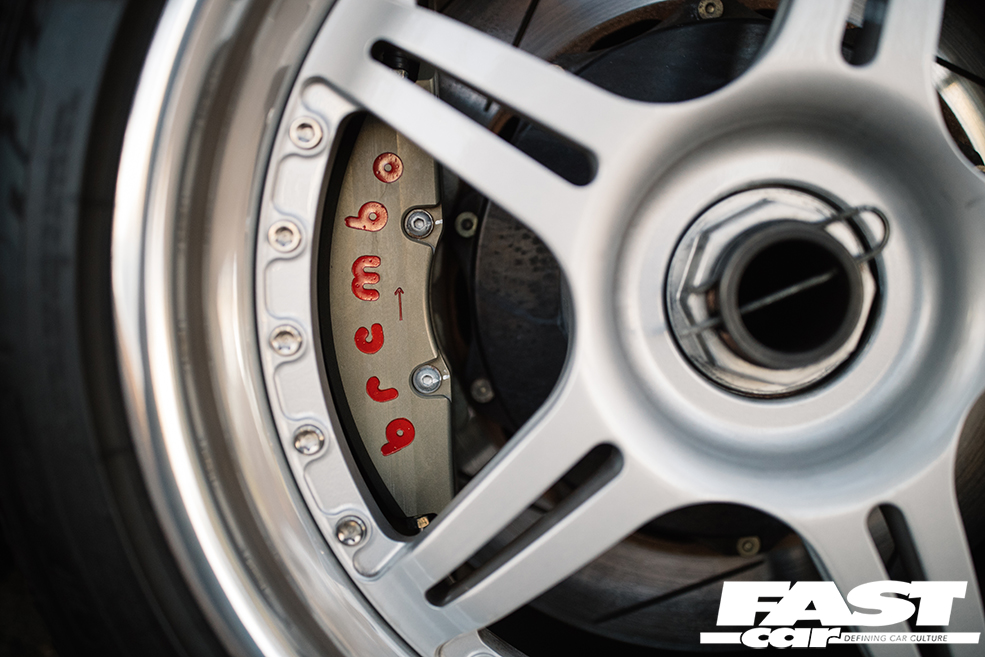 It was somewhere around this point in the story that fate decided to intervene, and somehow parachuted Ferrari factory tuner Michelotto into the scene. Juan had befriended a local mechanic who was once part of Ferrari’s F1 team before emigrating to Florida. He introduced Juan to the legendary Michelotto (who just so happened to have developed the F40 LM), and it was through this freshly opened avenue of awesome that he was able to purchase a pukka LM-spec magnesium pedal box with brake bias adjuster. Nice when things just work out, isn’t it?

The cherry on the cake was that the revered tuner agreed to make Juan an LM wing for his car – the last one ever to be made, in fact. And, even more thrillingly, because it took a while to be crafted they even sent him an uber-rare reverse-lockout shift gate as a thank you for his patience. Things really don’t get a lot better than that. 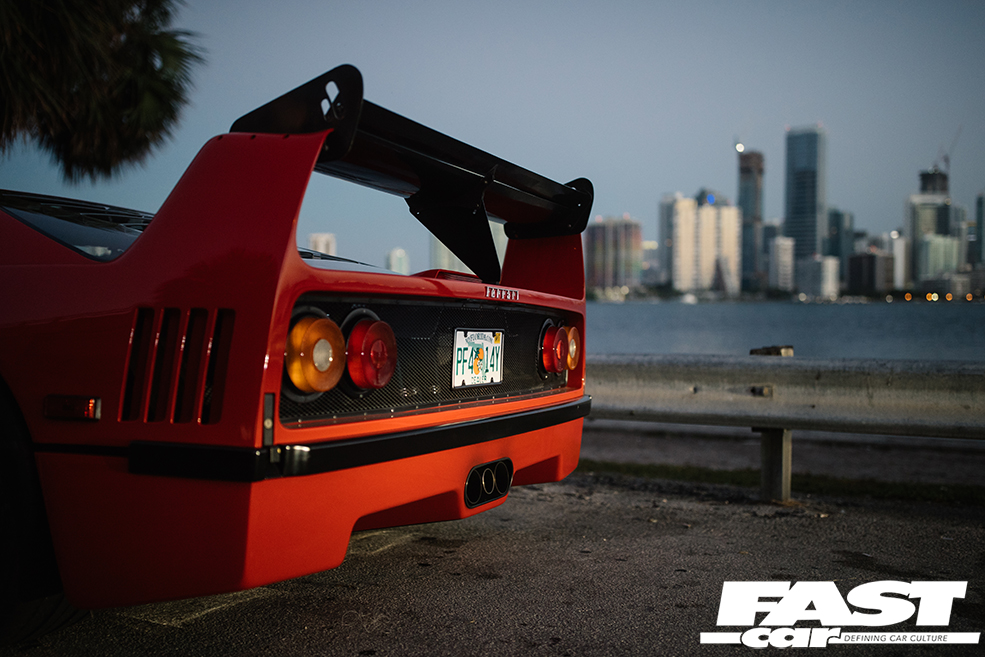 It’s obvious Juan is an incurable enthusiast. He uses his F40 as it was always meant to be used; while it has all the original manuals and paperwork – and even the matching luggage set – he hasn’t been afraid to customise and modify to make it his own. It’s a realisation of a long-held dream: while there are other cars that handle better, or go faster, or boast bigger numbers, this is the one he used as motivation for all those years of dedication, and he’s modified it to make it perform the way he always dreamed it would.

This isn’t just a car. This is proof that hard work pays off. 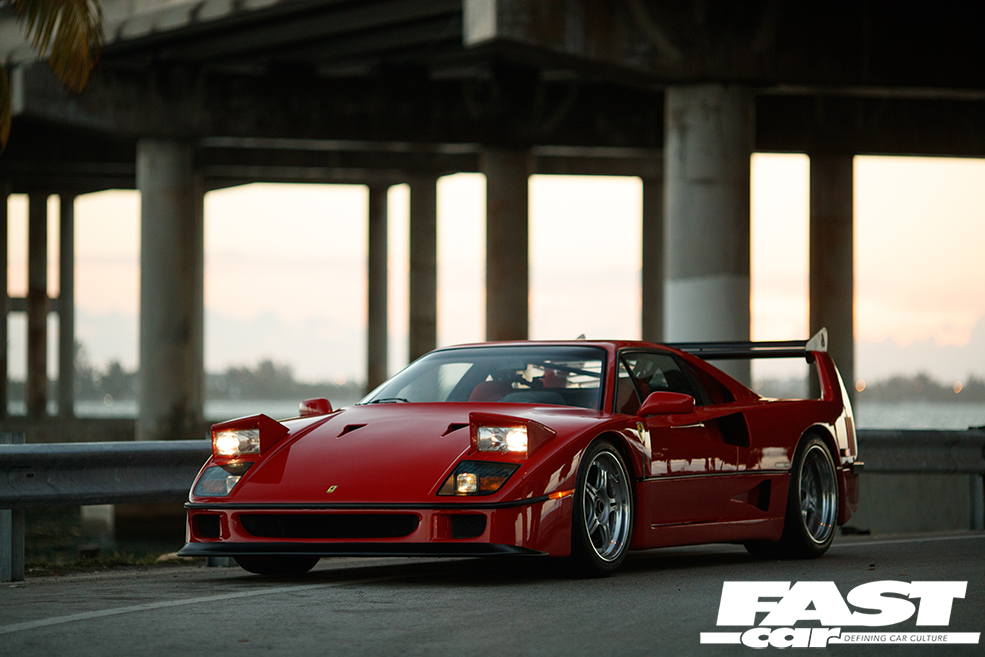