Bringing practicality with retro looks and a fun drive, the Mini Clubman R55 is a fun, affordable estate car. Here’s what you need to know.

It might not look it, but the second-generation R56 hatch is 60mm longer, thanks to reshaped rear styling. This meant an extra 10-litres of boot space, although on first look you’d be hard-pressed to notice any difference over the first-generation R50 and R53 versions. While you could buy a second-generation Mini hatch for the fun drive and handling, you wouldn’t for the boot space, as it was still tight.

So, any added practicality to the Mini’s combination of retro looks and keen drive would open up the Mini brand to more buyers. That Mini model arrived in November 2007, roughly a year after the R56 hatch was launched, reviving the Clubman name last seen on the classic Mini estate that was discontinued 25 years before. Based on the R56 hatch, the R55 shared its more efficient and sophisticated Citroen/Peugeot-supplied petrol and diesel engines, mated to a choice of six-speed manual and automatic transmissions.

The Clubman wasn’t just a conventional estate version of the R56. No, the R55 had retro-styled twin rear barn doors, with distinctive contrasting silver or black panelling, which fitted around the rear light clusters. These doors were a nod to the original classic Mini, with which it shares its name. Where the second-generation Clubman design courted controversy was that it had an extra third side door, called the ‘Clubdoor.’ Why controversial? Well, for UK right-hand drive models, this door was fitted on the right which hindered its usefulness, although the quality and fit of this extra door were impressive. 8cm of extra wheelbase and 2cm of extra height doesn’t sound like much, but thanks to the extended rear overhang, the Clubman is 24cm longer than the hatch, meaning a welcome 8cm of extra legroom, with boot space increasing to a respectable 260 litres or 930 litres with the rear seats folded. 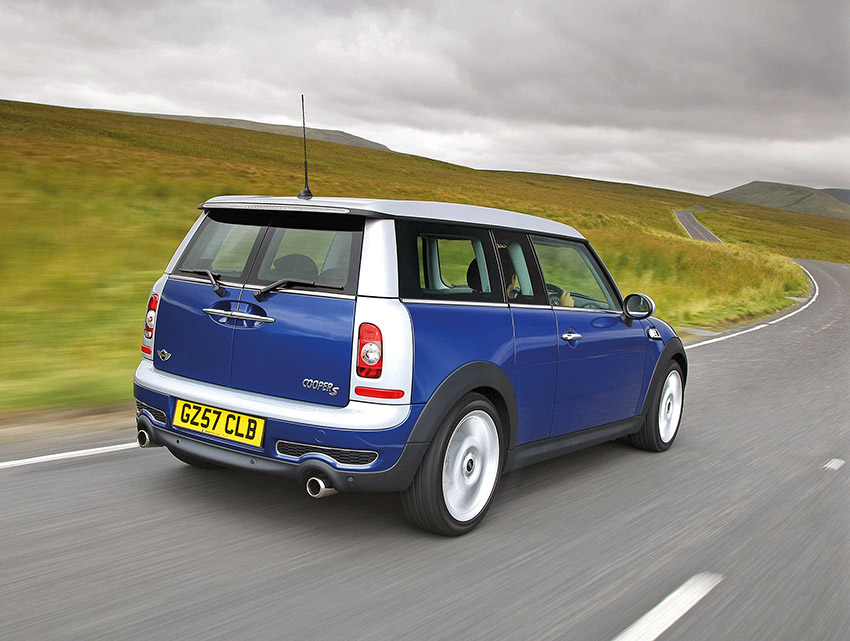 A brief history of the Mini Clubman R55

The first models available at launch were Cooper, Cooper D and Cooper S versions. The Cooper boasts 122hp from its 1.6-litre Prince engine, the Cooper D diesel with 109hp from its 1.6-litre and the 184hp Cooper S, powered by a turbocharged version of the same Prince petrol engine. In March 2009, a One version of the Mini Clubman R55 was introduced and was powered by a 98hp, 1.4-litre version of the Prince petrol engine. Later in May 2009, a John Cooper Works (JCW) range-topping version of the R55, was launched. Power was increased to 211hp from the uprated Prince turbocharged engine, with up to 206lb ft of torque with ‘overboost’ and a top speed of 148mph. In 2010, like the R56 hatch, the Clubman also received its mid-life or LCI (Life Cycle Impulse in BMW language) facelift, with exterior and interior tweaks. Yet, the most significant changes were made to the Cooper S and JCW’s Prince petrol engine. Now called the N18, the Cooper S benefited from the infinitely variable Double VANOS, a map-controlled oil pump, composite camshaft construction, a new piston design, plus fully variable valve control, the latter being BMW’s proven VALVETRONIC system that adjusts valve lift and opening times in direct relationship to the throttle pedal.

The JCW version of the last Mini Clubman R55 in our opinion is the hidden gem of the first-generation MINI Clubman range. It’s also unjustifiably rare – as just 177 were sold by Mini UK! There’s still the same 211hp performance, JCW body kit and Brembo brakes. The only difference is that this JCW is wrapped in the boxier Mini Clubman R55 body, which with its longer wheelbase equals a more forgiving drive at speed. No wonder it’s quite sought-after now!

Around £3000 is where R55 Cooper prices start, add another £500 for the swifter Cooper S, but these are for the earliest 2006 cars, so watch for engine issues, especially with the Cooper S. You can pay less, but these tend to be cars with issues. £3250 is all you need for an entry-level One, with 100,000 miles. Diesels might be out of fashion, but the cheapest still starts at £4000, with 138,000 miles. You’ll need at least £5000 to get into one of the earliest LCI facelift R55 Cooper S models, with around 90,000 miles. Around £7000 is where you’ll find facelift cars with more modest mileage between 50-80,000 miles. £8500 is where the fastest Cooper SD diesels start with around 60,000 miles. The JCW is the hardest to find, and the cheapest we found was a 2011 car with 90,000 miles, priced at £8500, which was available from a specialist. As with all Minis, buy on condition, specification and colour. There are also plenty of limited edition models, the Soho and Hampton in particular, which are worth searching out. 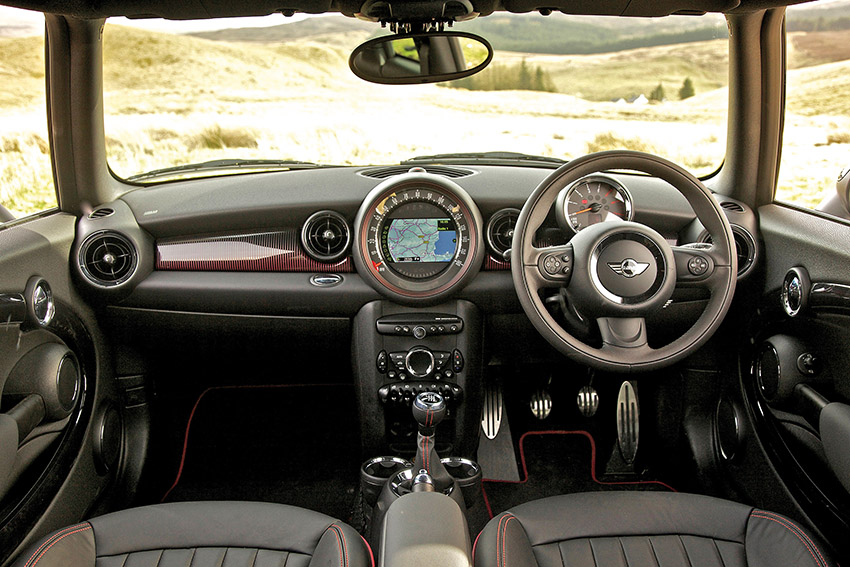 What to look out for on the Mini Clubman R55

Like the R56 hatch, the big issues with the Mini Clubman R55 are down to the mechanicals. If you’re looking at a Cooper, check for rough running, which is usually the result of Vanos solenoid problems, controlling the camshaft timing. Misfires are also common and are usually the result of spark plug or coil pack failures. Diesels can suffer diesel particulate filter (DPF) and dual-mass flywheel issues – performance will be affected and listen for excessive rattling.

Check any Cooper S or JCW pre the 2010 LCI facelift even more carefully, as they are fitted with the same Prince N14 turbocharged engine, which is based on the PSA TU unit, but with added BMW VANOS and variable valve timing. As such, they suffer the same engine issues. Talking about the valves, they will get coked-up thanks to carbon build-up as a result of the direct injection system fitted. This problem is likely to come to light on the test drive, as the engine will feel hesitant, performance won’t be up to levels expected and an engine warning light should be illuminated on the speedo. The only solution is to visit a Mini specialist and get the engine de-coked. For around £240, they will blast crushed walnut shells around the inlet manifold and tops of the valves.

Although this is not the most serious N14 engine fault as that is known as the ‘death rattle’. This is because it sums up the noise you will hear when starting from cold. Things get more alarming when you find out what is causing the noise, which is the result of the timing chain tensioner breaking up and the chain itself stretching. The only fix is to get it to a specialist sharpish, then get them to change the major timing kit components for about £600. We say sharpish because if left the tensioner will break, taking the top half of the engine with it. It is also worth mentioning that there have been isolated N18 engine tensioner issues, too.

The high-pressure fuel pump, fitted to both the N14 and N18 engines, is another weakness and is costly to replace at £600. Again, this should be obvious on any test drive, with poor starting and idling the biggest giveaways. A thirst for oil and oil leaks are not unusual, so make sure there’s plenty of oil on the dipstick.

Problems with the manual or automatic transmissions are rare, but manuals can suffer sloppy changes that can be fixed by replacing a worn cup in the linkage. While it is slightly longer, the R55 Clubman is as much fun to drive. However, anti-roll bar links, bushes and shock absorbers do wear, so check them carefully. Air-conditioning or climate control are popular features, but make sure they’re working on the test drive. If not, it could be as simple as the air-conditioning needing a re-gas, with prices starting around £60. Like the air-conditioning and climate control, make sure other electrics such as the windows and central locking are working, too. Leather trim is an attractive option, which stands up well to wear. But like all the other Mini sports seats, watch for bolster wear and the lighter colours tend to show the dirt. We’ve also heard of isolated rust issues with the twin rear doors. 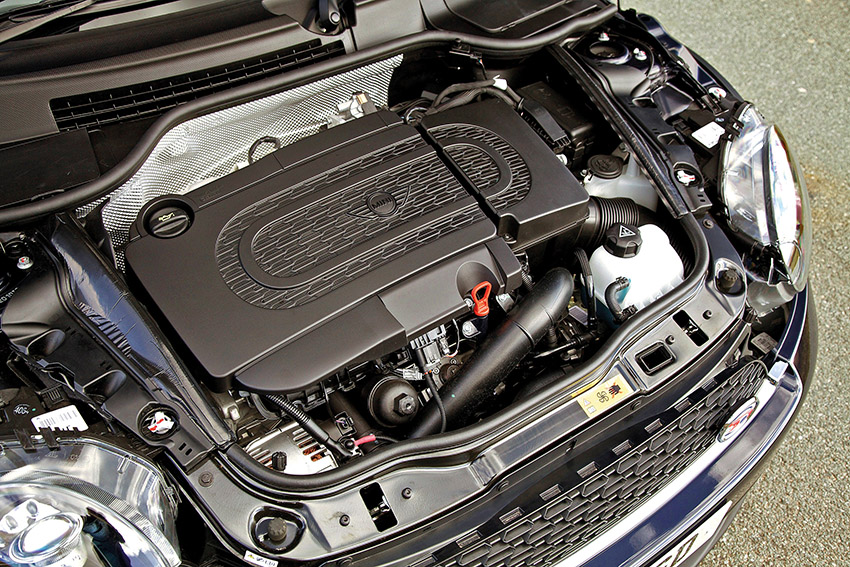 Initially, Clubman sales were slow, but with the current F54 Clubman five-door well established, the R55 now attracts new buyers who like this Mini’s quirky looks and the fun drive. And on top of all that, this Mini is tuneable with big power available.