This Group A Ford Escort RS1600i enjoyed an illustrious motorsport career before falling on hard times in the Nineties, but now thanks to Guido Futzemann it’s back together and looking better than ever.

It’s hard not to feel a bit sorry for the Mk3 Escort, particularly when it comes to competition variants. The Mk2 wasn’t merely a massive sales success, it’d broken rallying records across the globe, had won countless touring car trophies, and cemented the RS brand in the hearts of European consumers. It was, not to put too fine a point on it, a tough act to follow.

Ford realised that the Mk3 had to carve itself some motorsport credibility, and began developing race and rally versions before the car hit the forecourts, something that eventually resulted in legendary cars like the Datapost touring cars and, of course, the short-lived RS1700T rally programme. The on-track (and stage) exploits of these machines boosted the car’s appeal and undoubtedly helped sales, with the Mk3 eventually going on to spawn such icons as the XR3i, RS1600i and, of course, the Series One RS Turbo. 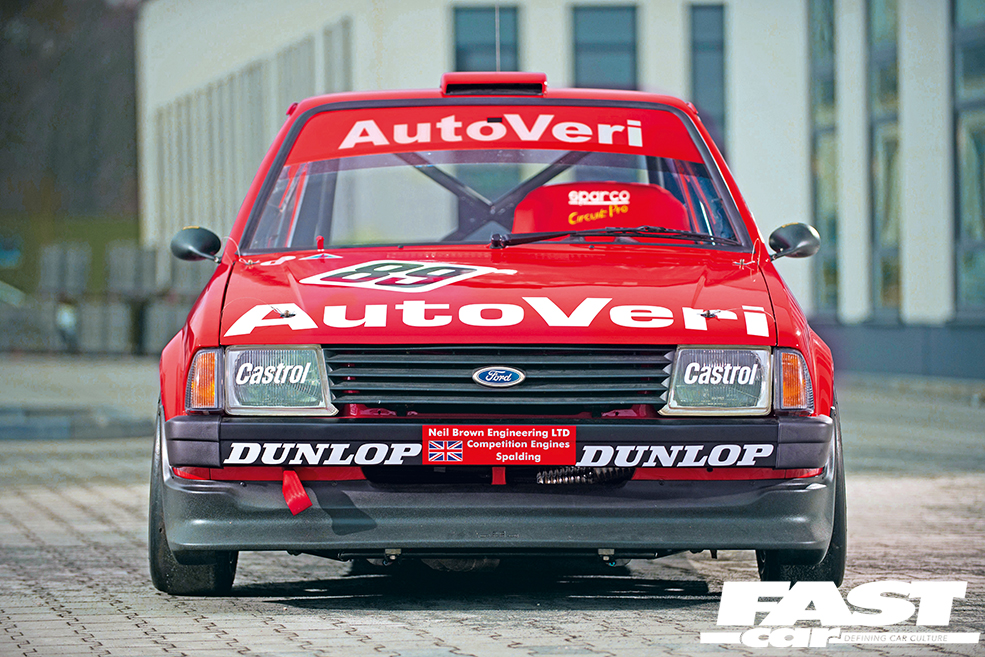 Ultimately, the Mk3 couldn’t quite bring home the same amount of silverware as the Mk2, but that doesn’t mean that serious, race-prepped examples didn’t do themselves proud on racetracks all over Europe.

Highly modified race versions continually punched above their weight in various tin-top championships, with this particular Group A Ford Escort RS1600i being a case in point. It’s now owned by serial fast Ford owner Guido, or Prof Futzemann as he’s better known (long-time readers may recall some of the previous Mk3 Escorts that have benefited from his input), but it also has an illustrious competition history, one that’s seen it do battle across some of the worlds’ most famous and challenging circuits, including the legendary Nürburgring. 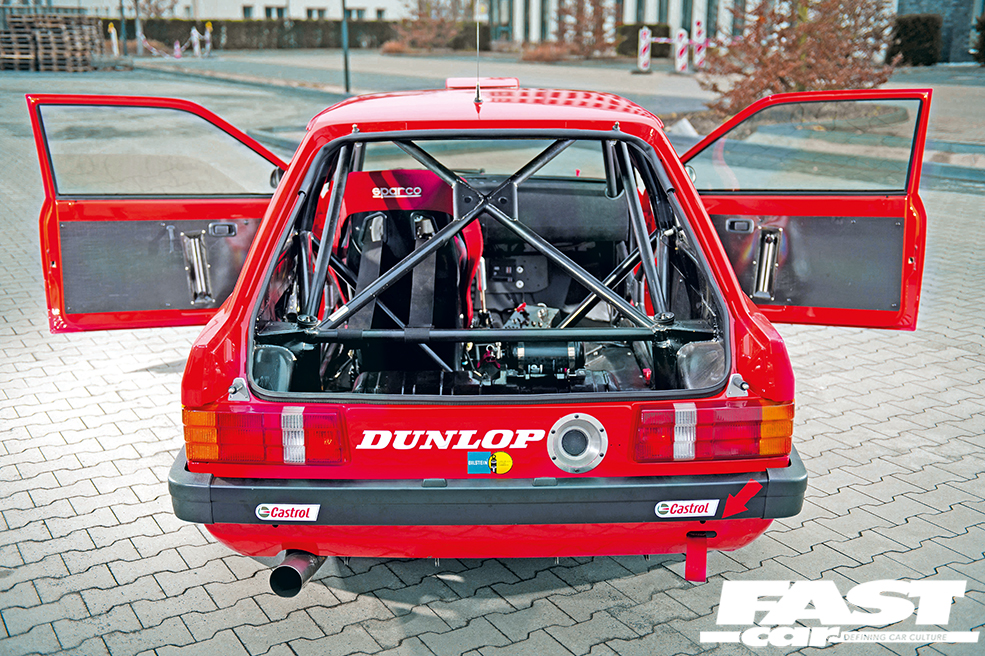 Guido explains, “The car was built by AutoVeri in Berlin and first driven by Gerd Ruch and his brother Jürgen Ruch in the ETTC in 1985. After that it was sold to Hüsken-Motorsport in Ibbenbüren, who used it for a few years and competed in a number of long-distance races at the Nürburgring.”

Success was hard to come by, though, with a series of mechanical issues preventing the car from delivering on its promised potential, and it eventually found itself being re-purposed and reused as a tarmac rally car in Belgium. Guido entered the picture in 1999, spotting the tired-looking Escort and deciding it was worth taking a punt on.

“When I first got the car it was a bit battered from so many years of competition, and I didn’t know much about it, and neither did the seller,” Guido recalls. “I ended up spraying it Mouse Grey after I bought it, and it was only later that I began to investigate its competition history.” 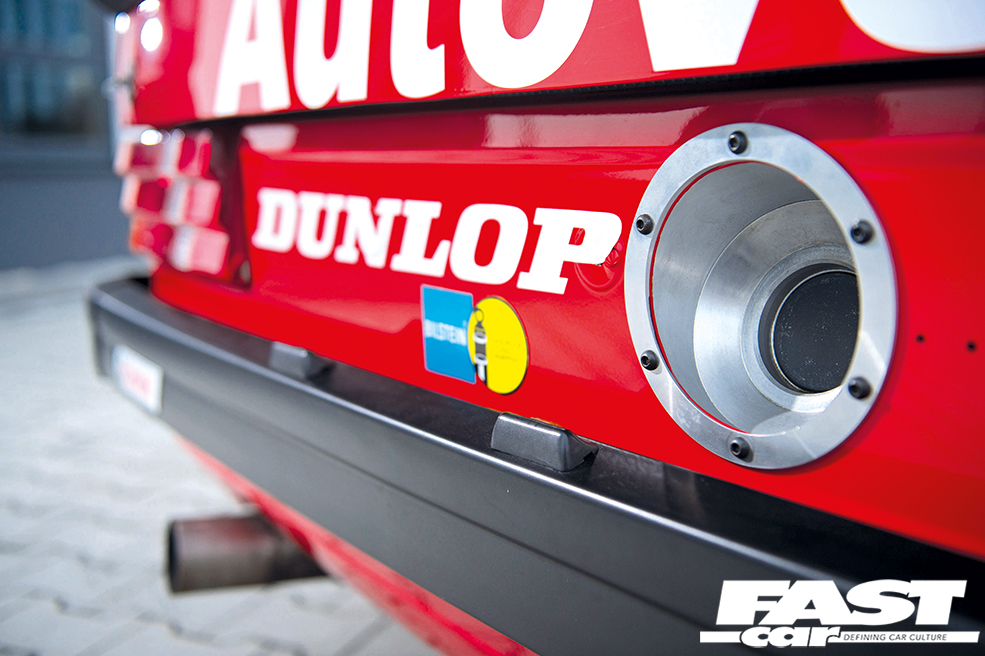 Once the car’s true pedigree came to light, Guido wasted no time in starting a sympathetic restoration, which culminated in the RS being repainted in original Sunburst Red and re-liveried in the war paint it would’ve worn in its ETTC heyday. That might make it sound like a relatively straightforward process, but make no mistake, it was a challenge, especially as Guido sourced many of the motorsport-specific components himself.

“It really had taken quite a beating during its nine years as a rally car, and I ended up replacing both front wings, the front valance and the passenger-side rear three-quarter,” he says. 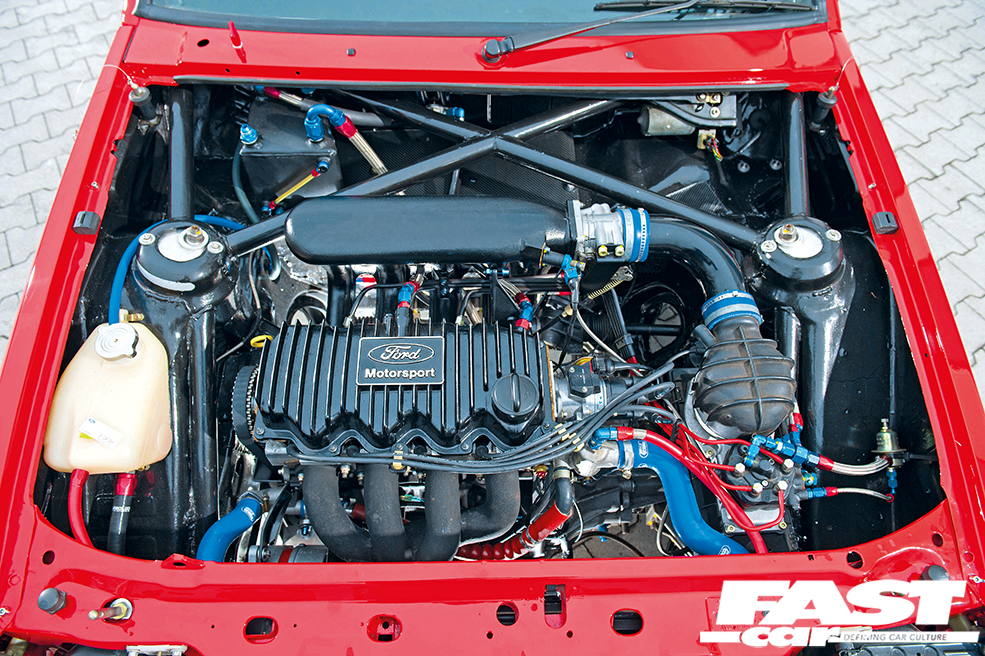 At the heart of the car lurks a Group A-spec 1600 CVH built by Neil Brown Engineering – a real screamer of an engine that pushes out an easy 165bhp thanks to a modified head, aggressive cam, enlarged throttle body and suitably beefed-up fuel system. The grunt is routed through a highly developed version of the standard B5 five-speed; one that’s had a sophisticated aftermarket LSD fitted, along with close ratios and toughened, bolted-in driveshafts. All was carefully taken apart and checked over by Guido before being put back together and slotted into position, and the whole engine and transmission assembly has proved remarkably reliable ever since.

While the regular, road-going Ford Escort RS1600i was a well-liked and sought-after car when launched, various sections of the automotive press highlighted its slightly woolly handling, something no doubt not helped by comparisons with its fantastically balanced rear-wheel-drive predecessor.

That’s not a complaint that could ever be levelled at Guido’s example, though, with AutoVeri having gone to town on the car’s suspension and brake setups – exactly as you’d expect to find on a car built to tackle fearsome racetracks. 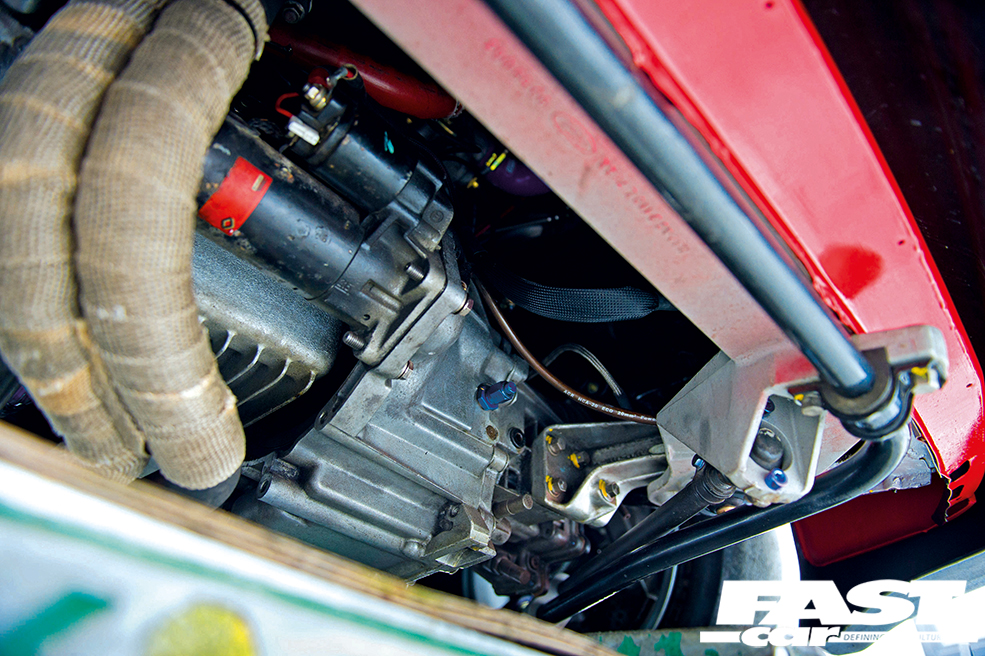 Now, that’s a sophisticated and enviable setup nowadays, but in the early Eighties it must been nothing short of sensational, and certainly enough to make this Mk3 one of the finest handling front-wheel-drive cars on the grid at the time.

It’s a similar story with the brake system; peeking between the spokes of the RS alloys will reveal a set of Alcon four-pot front callipers, and dinner plate-sized 295mm drilled discs. The rear doesn’t exactly miss out either, with RS2000 callipers and discs doing a very good job of hauling the Escort to a stop at a moment’s notice. Guido’s also fitted an adjustable brake bias system and a specially made throttle pedal, so it’s safe to say that heroic late braking is now very much the order of the day. 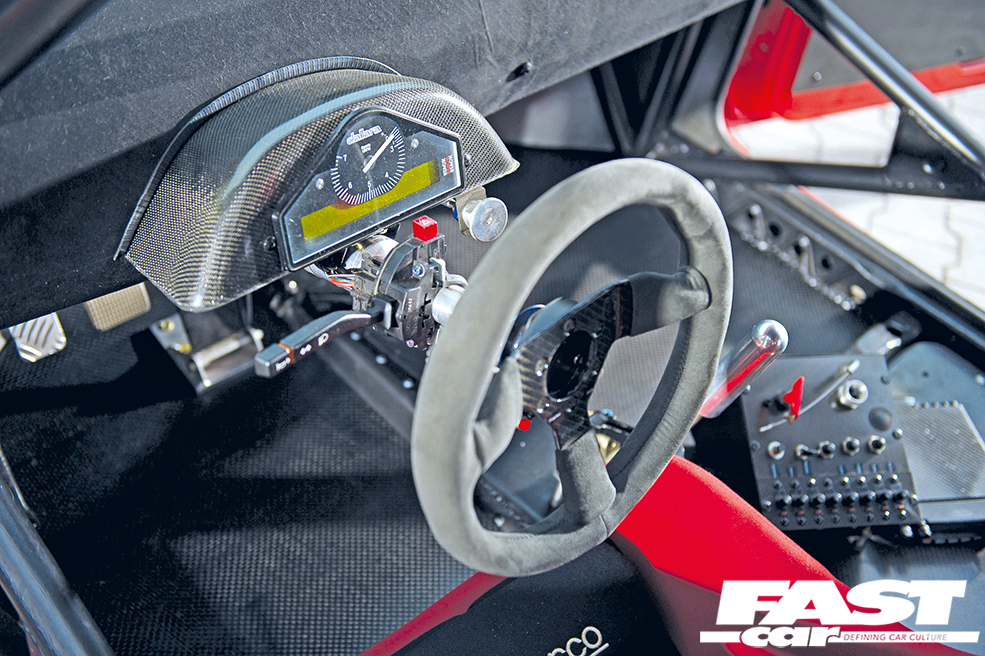 We’re aware that we’re paraphrasing here, but if a race car looks fast it normally is, and that’s never been truer than when discussing Guido’s Mk3. This generation of Escort has certainly got better-looking with the passage of time, and that’s only helped by this car’s squat, low-slung stance and perfect red paint.

There’s also a lot more going on here than meets the eye, with the shell being an original from Ford Motorsport. That means it boasts a smattering of composite panels, with both the bonnet and tailgate being made from the thinnest layer of fibreglass. 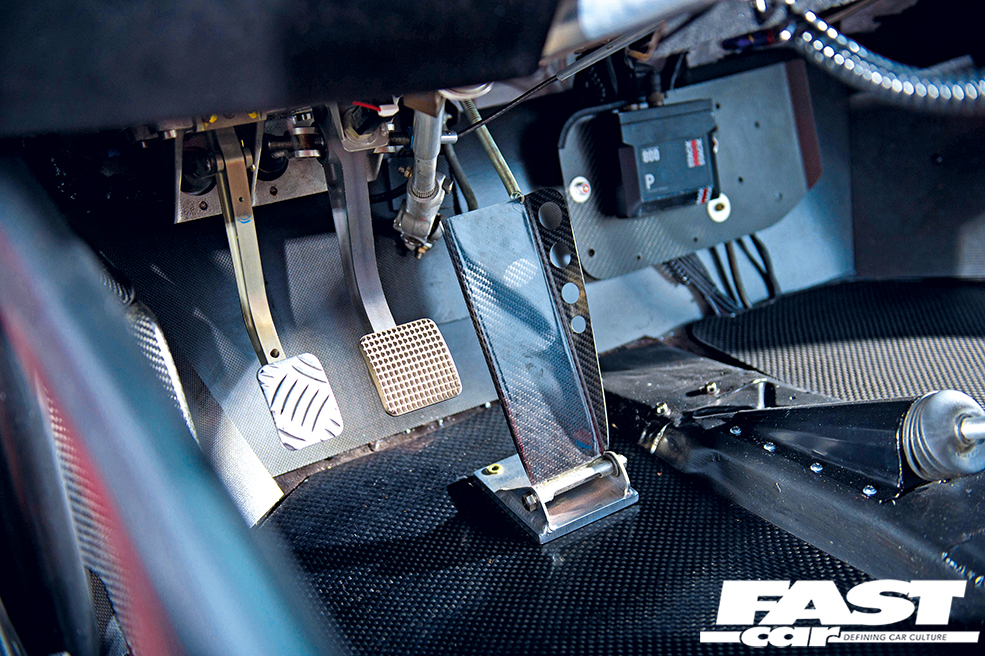 The bulky wheel well has been removed, the rear windows are made from plastic, and the roof scoop has been constructed from carbon fibre, while inside you’ll now find an imposing welded-in roll cage from Wiechers. Make no mistake, this is a very serious competition car indeed.

Spartan probably doesn’t do the bare interior justice, with near enough everything non-essential having been removed, chopped out or otherwise dumped to save weight.

A Sparco bucket seat is bolted to the floor itself, meaning Guido had to construct a special one-off dash in order to be able to properly see out of the windscreen. The steering column is made from alloy and features the power steering system cribbed from, of all things, a Toyota Carina STW, while the pump first saw service in a Porsche 997. You’ll also spot a Stack race display with built-in data analysis software and a radio for keeping in touch with race control. 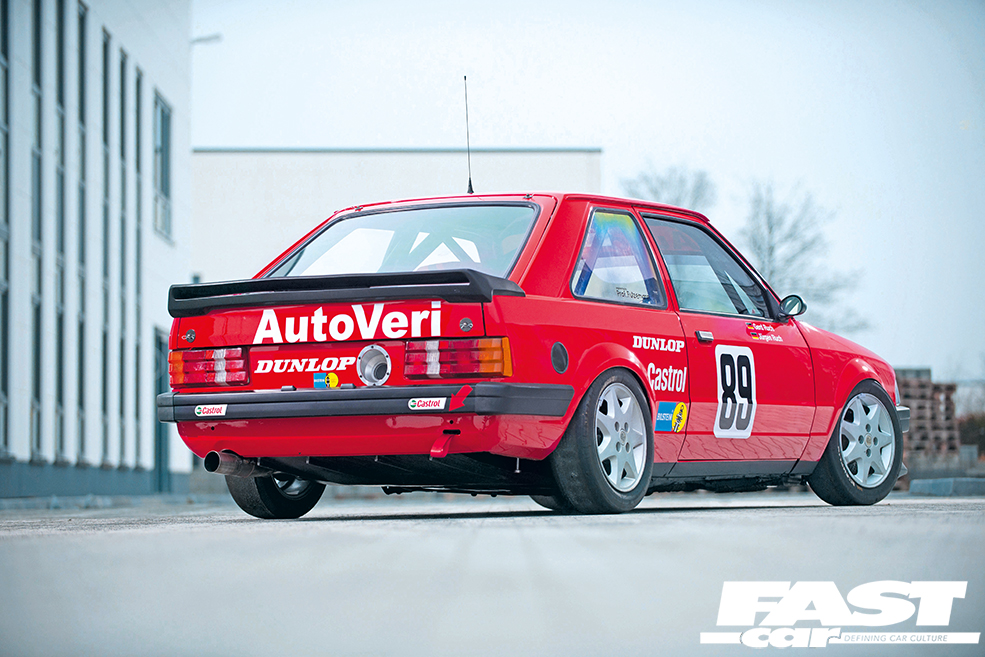 The car’s oh-so-pristine looks belie the fact that the restoration was long-winded and tricky. Guido is something of a Mk3 Escort fanatic (he owns another Mk3 with an ultra-rare 16-valve CVH), but even he admits that the challenges involved with resurrecting such a rare race car were many and varied, though of course, the result is more than worth it.

That said, it’s only when you press Guido to describe how it drives that it becomes clear just how much this Group A Ford Escort RS1600i actually means to him.

“It’s a subject that I could easily write a full book on,” he grins. “I’ve spent a long time perfecting the handling so that it’s predictable and feels neutral while cornering, while the brakes really are amazing when they’re warmed up – it’s a real beast.”