After selling his S550, Jason’s back behind the wheel of a Ford Mustang, but how does the Mach 1 compare to his old track-tuned GT?

Now, here’s an interesting one: a Ford Mustang that’s been focused for track use, with 450bhp-plus under the bonnet, and with uniquely calibrated suspension that has been designed to fuse fast-road fun with track-day thrills. It sounds very similar to my recently departed Mustang GT (check out our S550 buyer’s guide): similar power, modified for the track with suspension and handling upgrades, plus lightweight wheels.

So, as you can imagine, I was looking forward to driving the Mach 1 that Haynes of Maidstone has unveiled as a demonstrator. This example is set off in the Mach 1’s signature Fighter Jet Gray, and although this colour is technically a no-cost option (the only no-cost colour apart from Race Red – all other shades range in price from £250 for Oxford White to £850 for Twister Orange and Grabber Yellow), it automatically includes the Mach 1 Appearance Pack, costing an extra £1400. This kit adds satin black bonnet and side stripes with reflective orange accents, orange brake calipers and orange accents on the seats. It’s certainly distinctive. 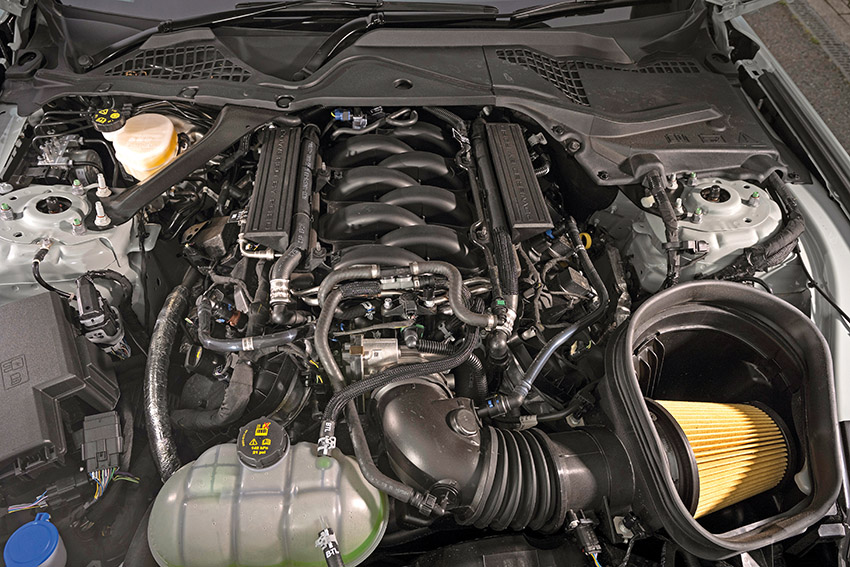 In addition, the Ford Mustang Mach 1 serves up a unique front splitter, belly pan and rear diffuser. Together these are said to create as much as 25 per cent more downforce than the regular GT (here’s our Mustang tuning guide). There is a slight drawback to this more aggressive body styling, though, as rear parking sensors and adaptive cruise control is not an option on the Ford Mustang Mach 1.

Perhaps as a nod to the track enthusiast, the optional 19in Magnetic five-spoke alloys are nice and easy to keep clean. Nobody wants to remove caked-on brake dust from multi-spoke wheels.

The demonstrator has optional Recaro seats (£1900), which are a must-have if ordering a Mach 1; they are super-comfy on the road, supportive when on track, and set the cabin off very nicely.

The interior houses a Bang and Olufsen speaker setup with a large subwoofer in the boot. It sounds great, but if I’m honest, I preferred to flick through the variable exhaust modes to listen to the V8 soundtrack instead.

The naturally aspirated 5.0-litre is based on the same Coyote motor in the latest S550 models, but in the Mach 1 the engine produces a little bit more: 460PS (454bhp) and 533Nm of torque (393lb.ft). The Ford Mustang Mach 1 starting price is £55,255, and that’s a big jump from the previous top-of-the-range Bullitt, which is no longer available. 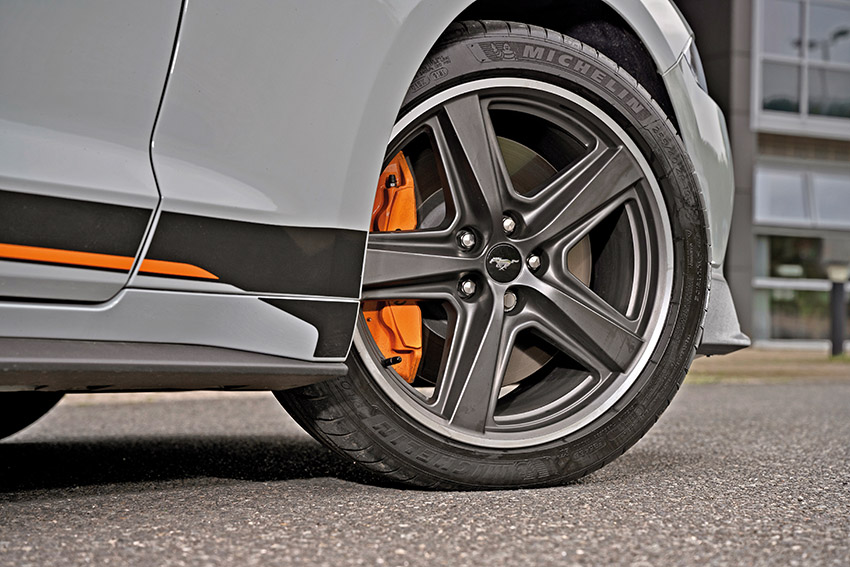 But the Mach 1 does come with Ford’s clever MagneRide adaptive suspension system, which was a costly option on the Bullitt (at £1600), and now features a unique Mach 1 calibration that’s better suited to fast road and track use: it’s a comfy GT cruiser one minute, and then in track mode it firms things up nicely for better control and response on a circuit.

This car also has the more driver-involving six-speed manual gearbox. The latest Mustang is also available with a ten-speed auto, and for GT cruisers that’s probably the best option – it’s a tad quicker to 60mph than the manual too.

Together with the wheels, Recaros, Fighter Jet Gray and Appearance Pack, this particular car would cost you £59,455.

So, what does a £60k Mustang feel like to drive in the UK?

Well, for starters, the six-speed Tremec is perfect for such a large and heavy car; it makes you feel like you are in a much smaller, lighter sports car, and one that doesn’t just want to go fast in a straight line but wants to tackle some twisty B-roads too. The close ratios mean you can rifle through the gears quickly and precisely, and this car was built for doing just that. Plus, the £2000 saving will buy you a few tanks of fuel to burn and another set of tyres to destroy on track, and that’s what this car is all about. 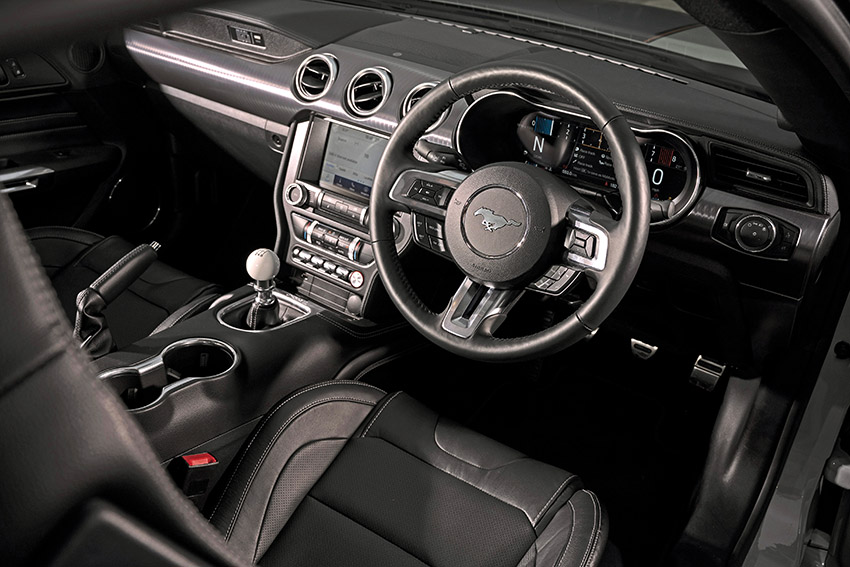 The handling is great. There’s minimal body roll, and the front end goes where you point it. It’s all very nice from the cabin too; the soft-feel leather steering wheel is just right, and the pedals are well-placed, with a very solid brake feel as you’d expect from the Brembos.

In addition, all the instruments are digital and are fully customisable to suit your taste; you even have a Mustang button that takes you to your preferred driving style settings.

I must admit, I was expecting it to be firmer and not as comfy as the regular GT on typical British roads – that was a sacrifice I made with my old GT in the search for better on-track performance – but it was surprisingly compliant when in normal mode. 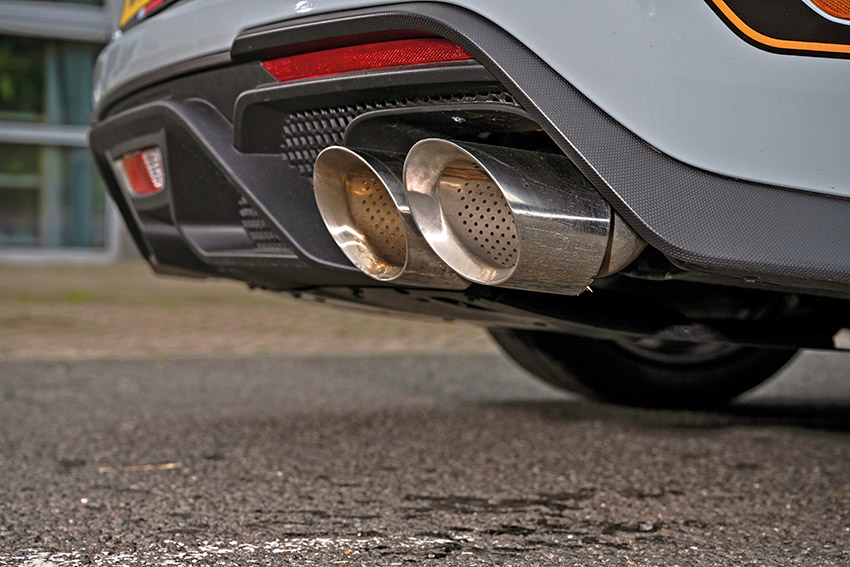 I was expecting it to feel a little racier, even more track-focused, and squatter to the ground. Plus, the glorious V8 soundtrack seems a little muted, even in track mode.

These issues are, of course, largely down to personal preference and are certainly nothing a few well-placed upgrades from the wealth of Mustang tuners won’t fix. But don’t expect it to be a Mustang that doesn’t get modified; enthusiasts will want to put their own stamp on the car and tailor the driving experience to suit their styles and preferences.

In that sense, it’s still very much a true Blue Oval. It’s the perfect base for owners to take to the next level.

And for that you could whack a supercharger on top of the V8 and build a proper M-killer. We’ve featured plenty of supercharged Mustangs in our time, check out this 840bhp S550…

Plus, let’s face it, the V8 muscle and Mustang design is always going to turn more heads. 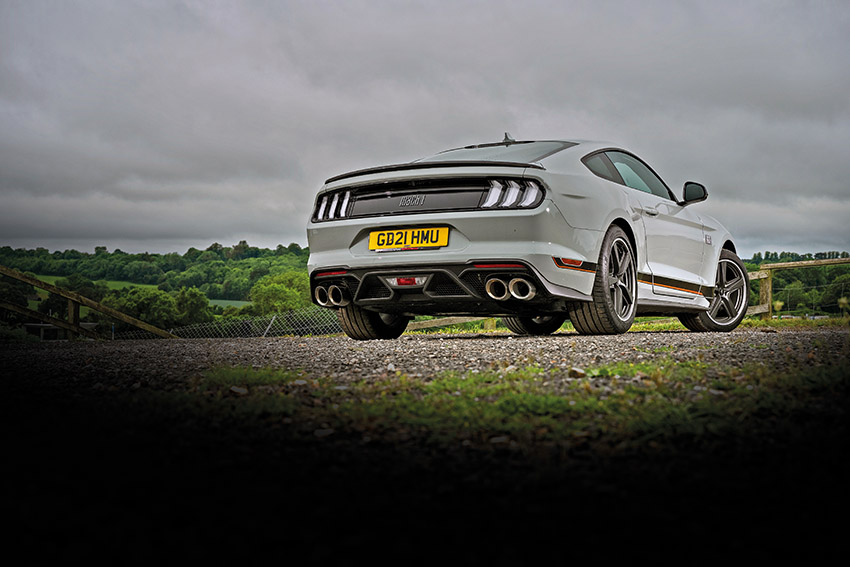