Why you want a Ford Mondeo 2.5T 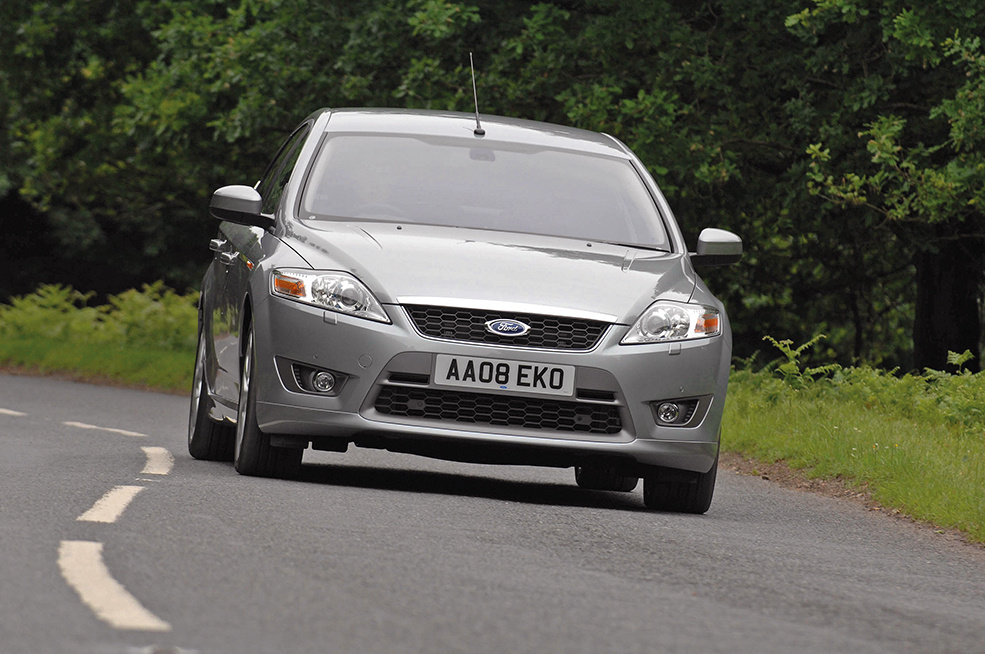 Which one? Various trim options, bodystyles, extras and rarity of the 2.5 mean you will struggle to find your ideal Mk4. But it’s (probably) out there, so keep searching.
Engine – Misfires, water mixing with oil and white smoke from the exhaust tell you to run away – cracked cylinder liners are the likely cause, meaning a replacement engine is required.
Transmission – Any Mk4 running more than standard power – even a Stage 1 map – will kill its clutch quickly. Take a test drive and test for slip by booting the throttle in a high gear.
Suspension – PAS problems can be pricey, so listen for nasty noises. Clonking and knocking is more likely worn bushes or suspension top mounts.
Interior – Tatty cabin? Lots of rattles? Collapsed driver’s seat? Worn-out carpet? You don’t need to spot beaded seat covers or vomit in the back seat to suspect any Mk4 Mondeo has been used as a minicab…

What to look out for on the Ford Mondeo 2.5T Mk4

Mondeos aren’t prime targets for theft and fakery, but a history check is vital to ensure it’s not a ringer, write-off or subject to outstanding finance. Check the VIN on the logbook matches the numbers on the sticker on the driver’s-side B-pillar, stamped under a flap in the carpet on the driver’s-side sill (in front of the seat) and on the nearside dashboard, visible through the windscreen.

Ideally, connect an OBDII code reader to the Mondeo’s diagnostic port (beneath the steering wheel, under the dash) and compare the VINs.

If you’re concerned about which model you’re buying – it’s easy to get caught out – the Ghia, Titanium and Titanium X were all offered as four-door saloons, five-door hatchbacks or estates, while the Titanium X Sport could be bought only in hatchback or estate form.

All were offered with Sport Pack of 18in Y-spoke wheels, sports suspension and rear spoiler (on five-doors and estates).

The range-topping Titanium X Sport was available only as a hatchback or estate, and came as standard with Sport Pack plus full bodykit, chrome exhaust tailpipes, Alcantara/leather seats and door cards with red stitching, alloy pedals, black dash trim, and xenon headlights. 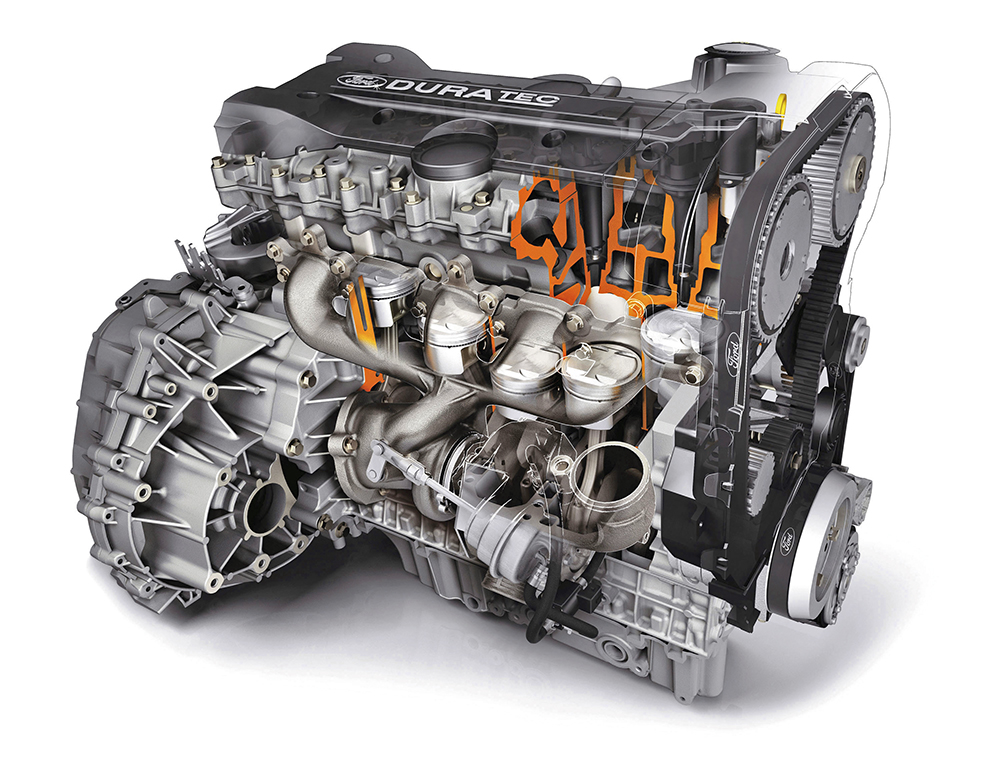 Almost the same as the five-pot found in the Focus ST225 and RS Mk2, the Mondeo’s 2521cc Volvo-sourced engine is susceptible to the same issues. Indeed, Collins Performance says the Mondeo’s additional weight puts greater strain on the components, and cracked cylinder liners are proportionally more common in the larger car.

Check for symptoms of split liners, which are similar to head gasket failure: water in the oil and/or misfiring after a cold start, or white smoke from the exhaust. Watch out for an engine that’s been upgraded with the well-known ‘block mod’ (shims between the liners) because it’s sometimes done to reduce water leakage on a knackered block instead of a precautionary measure.

Check the oil filler cap for sludge – most likely from a failed oil filter diaphragm housing, which makes a whistling noise at idle and can cause cam seals to leak. An uprated diaphragm should be fitted instead.

The Mondeo is no fireball, but particularly poor performance could come from a boost leak or blown sensor – often the boost control solenoid, which is a cheap and easy fix.

Rough running tends to be caused by MAP or MAF sensor issues. Air leaks are common, from split intercooler hoses, knackered sound symposer (fixed with a blanking plug); the engine management light will probably be aglow.

Look for coolant leaks from the thermostat housing, radiator top hose and turbo feed. Listen for gruff noises, especially at start-up – possibly from the exhaust or manifold gasket, especially on the turbo side. Squealing is probably a tensioner pulley or belt –it needs changing to avoid damage.

Don’t assume you can simply bung an RS engine into a Mondeo, or use the Mk4’s 2.5 to repair a knackered ST225: although the internals, head and ancillaries are the same, the cylinder block casting is different for the driveshaft supports. The Mondeo’s is the same as the S-Max, Galaxy and Kuga 2.5T, and can be upgraded by installing RS pistons and rods into the Mondeo block.

But the fuelling setup is completely different: Mondeos have Volvo-type variable fuel pressure (2-bar at idle; up to 5-bar at high revs) instead of the Focus’s static 4-bar in-tank fuel pump. This makes modifying more complex – 250-to-280bhp is the sweet spot, so beware of a Mk4 claiming more than 300bhp. At this level, an uprated intercooler is also essential. 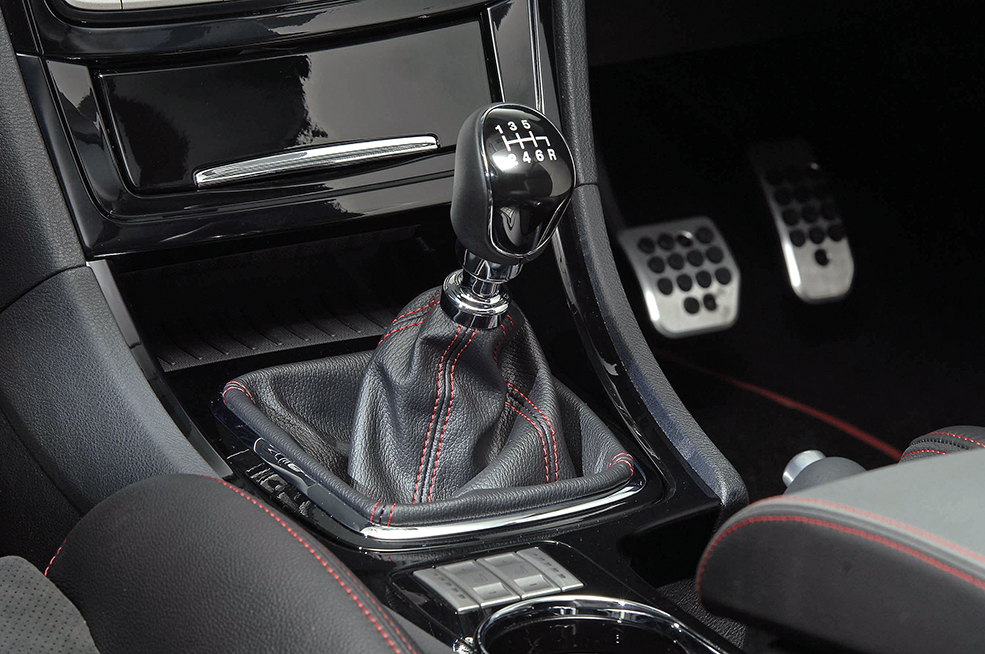 The same can’t be said for the clutch, which will expire immediately when faced with even a Stage 1 remap. Check for clutch slip by driving in fifth gear at 2000rpm and flooring the throttle; if the rev counter spins but the road speed doesn’t increase, the clutch is knackered. A Focus RS Mk2 clutch, with pressure plate and flywheel, is a direct-fit, cost-effective upgrade, which can handle 450bhp.

A clutch swap should be accompanied by a replacement dual-mass flywheel (DMF) and slave cylinder, which increases the cost but alleviates further problems; a tired DMF will be rattling at idle, with vibrations felt through the clutch pedal. Signs of a failed slave cylinder will be a clutch pedal that doesn’t return to the up position after pressing; the symptom can also arise after a clutch change or overheated fluid, so may only need bleeding.

Listen for clonking or grinding from the front end while in first or reverse gear, which could point to a worn or damaged driveshaft, or simply in need of lubrication. Clicking on full lock will be due to a failed CV joint, which is relatively cheap to repair. 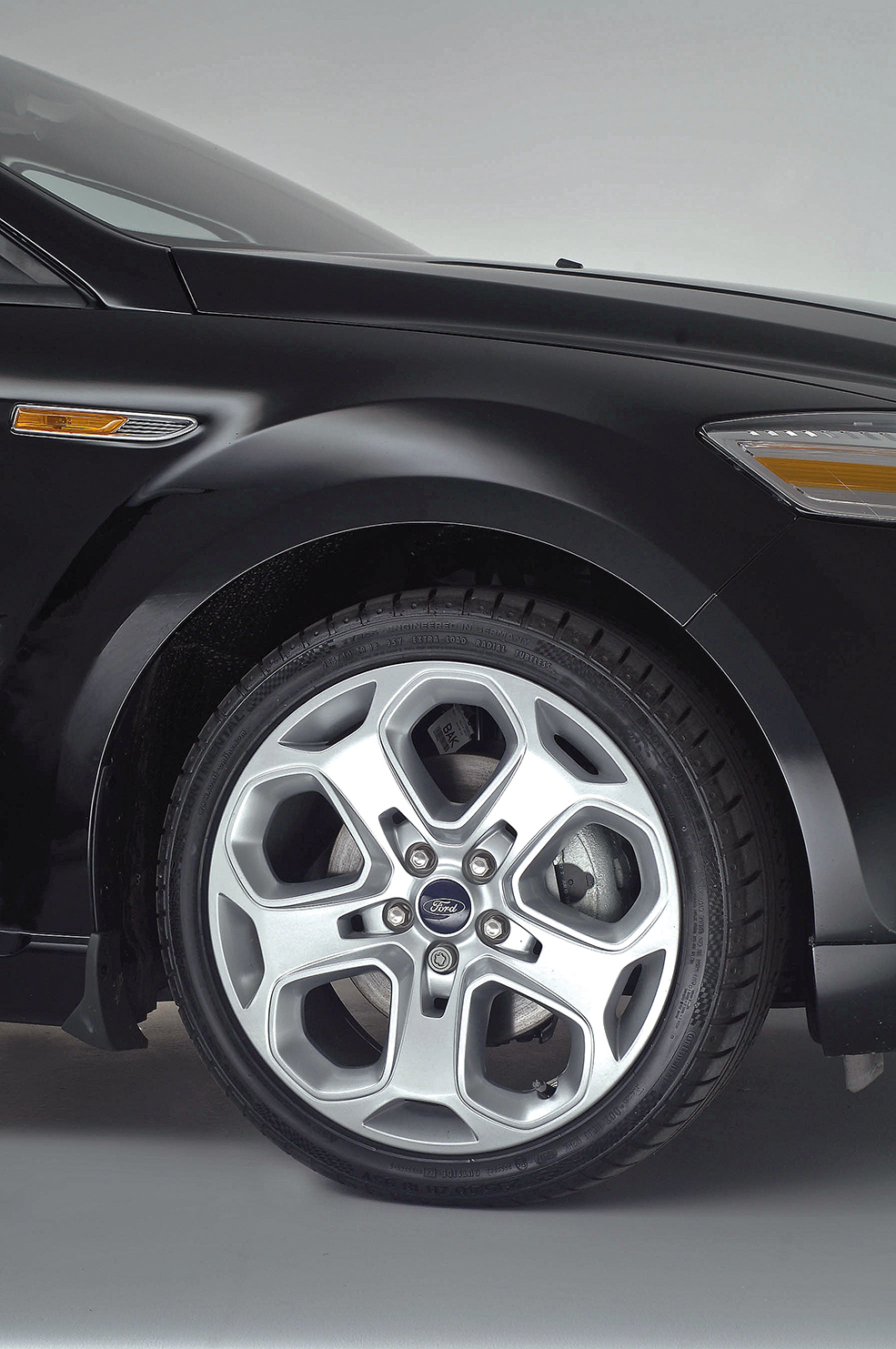 Mk4 Mondeos are massive – bigger than the last Granada/Scorpio – and feel it too, so it’s not a sporty drive. But for a large car they’re nimble and engaging, so there should be no sloppiness in the suspension or vagueness when driving.

All Mk4s share the same steering, suspension and brakes (apart from Sport Pack and Titanium X Sport, which wear lowering springs), so the 2.5 suffers from the same few issues.

Mk4s are known for PAS (power-assisted steering) problems, so listen for whining or groaning noises, and ensure the steering isn’t heavy or notchy. A slight hum on full lock is normal, but anything else could point to failure of the PAS pump or steering rack – both are expensive to fix, although if well-maintained and caught early, regular fluid changes may help.

Knocking felt through the steering could be caused by failed anti-roll bar drop links or – more likely – front suspension top mount bearings. Parts are cheap, but replacement means dropping the MacPherson struts. Front subframe bushes should be checked too; worn oil-filled versions can be swapped for polyurethane upgrades without detriment to ride quality.

Rear suspension bushes are a common weakness; check the trailing arms and subframe, even on a low-mileage Mondeo. Trailing arm bushes aren’t overly pricey but need a special tool to avoid having to remove the entire arms from the car. A visual inspection should be enough, but the rear end will knock if the bushes are completely shot. Check the subframes for excessive corrosion.

IVDC electronic damping was optional, although rarely specified. If fitted, inspect the wiring under the wheelarches, which can chafe and wear though.

Listen for rumbling wheel bearings, and check the tyre treads; the 2.5 is heavy on rubber (especially fronts), so don’t be surprised to find cheap and noisy Chinese tyres ruining the Mondeo’s ride and handling.

Despite their performance potential, 2.5s wore the same brakes as bottom-of-the-range Mk4s, so wear rates can be high, and taxi-special pads won’t feel great. Mondeos were recalled due to an ABS fault, which caused the brakes to lock under heavy use, but it’s unlikely to be an issue these days. 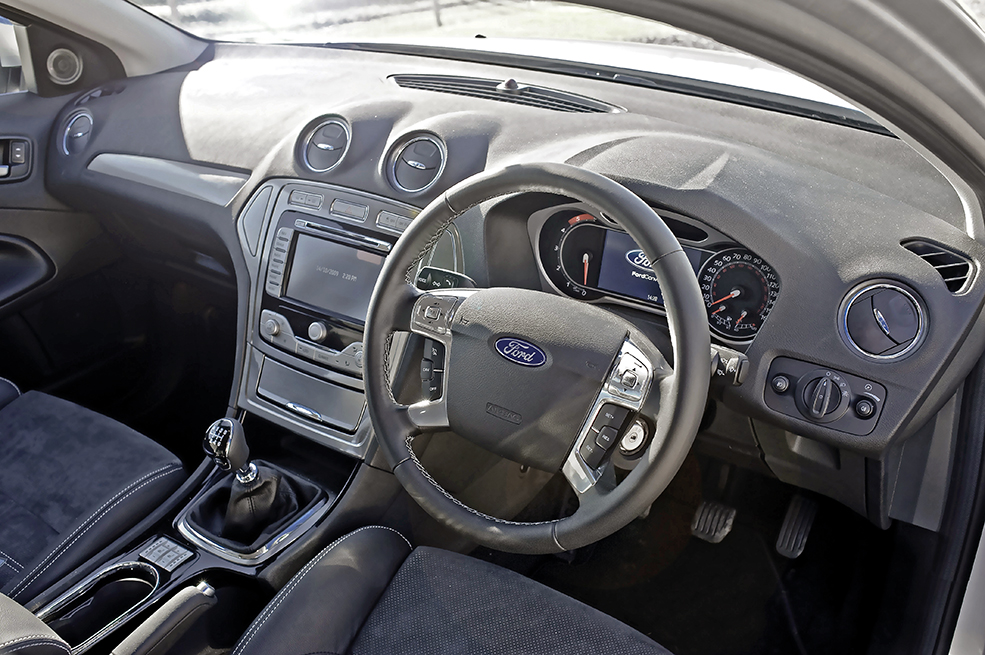 Mk4s had a durable cabin, with choice of several executive trim levels for the 2.5. Any example with a tatty interior has ether been abused or travelled a few laps of the planet.

Some owners report problems with the seats, suffering broken headrests, side bolsters collapsing, and general lack of support. Even sporty models lack the figure-hugging comfort of a Recaro, and most came with manual adjustment (other than electric raising and lowering); multi-function memory seats were a rare option, and full leather is less common still.

Check the instruments for warning lights. Seatbelt deactivation is common (and easily cured without a diagnostic tool), as are dancing dials, accompanied by the stereo turning itself on and off; a software update is the cure, but disconnecting the battery tends to give a temporary fix.

All 2.5s had dual-zone climate control, so ensure the air con works properly and gets ice-cold; condenser failure is common and expensive to fix.

Many Mk4 owners have reported fuses blowing for no reason, early failure of the remote-control key fob (always use a good-quality CR2032 battery), and temperamental electric window and central locking mechanisms caused by faulty door modules; give the key a few presses to ensure everything works. 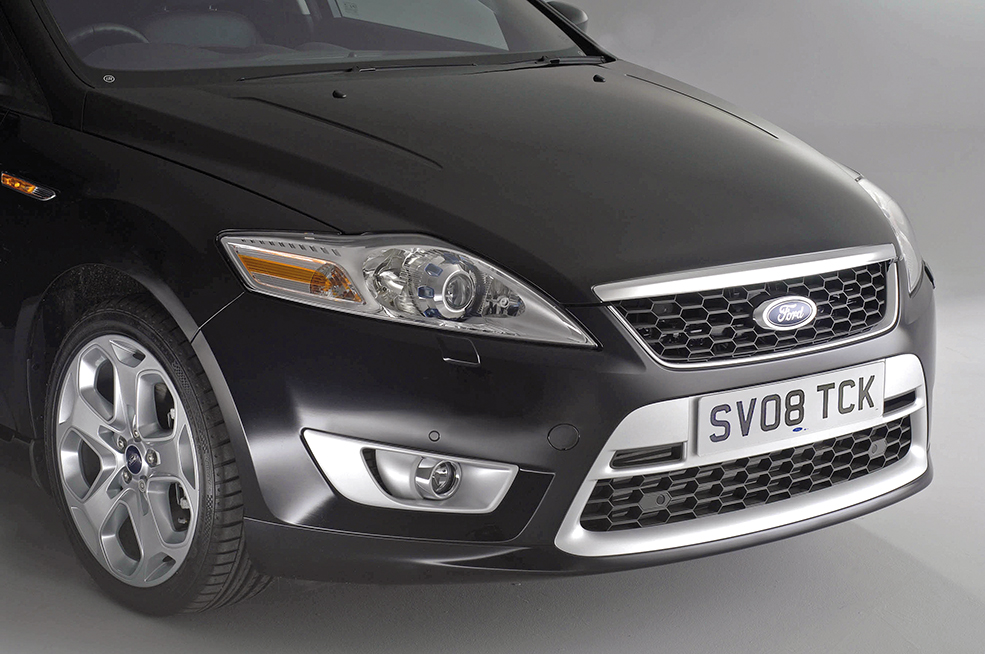 Rusty Fords are common, but not if it’s a Mk4 Mondeo. Signs of serious bodywork corrosion suggest badly-repaired accident damage (look for overspray, creases, poor panel gaps and signs of body filler).  But don’t be surprised to see minor rust around the rear wheelarches and within the inner arches (behind the plastic wheelarch liners, which hold moisture).

Early hatchbacks were particularly prone to rainwater leaking into the luggage compartment, flooding down beside the seals and into the boot. The problem was cured on cars built from mid-2008 onwards, but check carefully for dampness and even resultant corrosion.

Boot locks occasionally stick, as does the bonnet lock and cable; regular lubrication/maintenance avoids these problems. All Mk4s are prone to losing the weather seals that run beneath the doors thanks to fragile clips.

A sunroof is a rare (and desirable) option, which may judder when opened or leak into the cabin; replacement seals are the answer. Parking sensors were a useful option,  but also play up. A heated windscreen was standard, but elements sometimes fail, requiring a whole new ‘screen.

Headlamps and indicators have strange quirks, sometimes operating for no reason or going out and giving a flash on the dashboard. It’s reckoned to be a body ECU fault, although some owners find success with spraying the light connectors with contact cleaner. The adaptive headlights also fail, often caused by a faulty levelling sensor or sometimes just a poor electrical connection.