It’s the fastest Focus so far, but don’t think the Ford Focus RS Mk3 can’t be improved – it really can with some proper tuning, and here’s how…

Even before it finally arrived in 2016, the Ford Focus RS Mk3 was creating headlines. Developed with input from Ken Block, and featuring gadgets such as the famous Drift mode, Ford knew how to create media hype around the launch of its latest – and still the most recent – Rallye Sport model.

The result was the most powerful, fastest, and arguably the most exciting mass-produced performance model of an entire generation. Contemporary reports hailing it as the spiritual successor to the much-missed Escort RS Cosworth were not wrong.

Tuners and enthusiastic owners couldn’t wait to get their hands on the latest hot Ford, and it wasn’t long before the aftermarket was awash with various upgrades to improve performance and styling. With such a new model – not to mention the warranty issues surrounding the fabled head gasket saga – the first round of tuning mods focused mainly on bolt-on upgrades: air filters, exhausts, intercooler, and remaps offered owners 400bhp with ease. But with several bottom end failures stealing the internet headlines, tuners and owners turned their attention to sorting out the EcoBoost’s known fragilities.

With numerous options for forged upgrades now available, we’re on the cusp of a Ford Focus RS Mk3 tuning eruption. Various big-turbo packages, seemingly endless tuning options for the factory and aftermarket engine management systems, a wide range of clever suspension and transmission upgrades, and, of course, a massive selection of styling options, all mean that today’s RS owner can really tune their Focus to exactly where they want it. Here’s how. If you’re still looking to buy one, check out our buying guide. 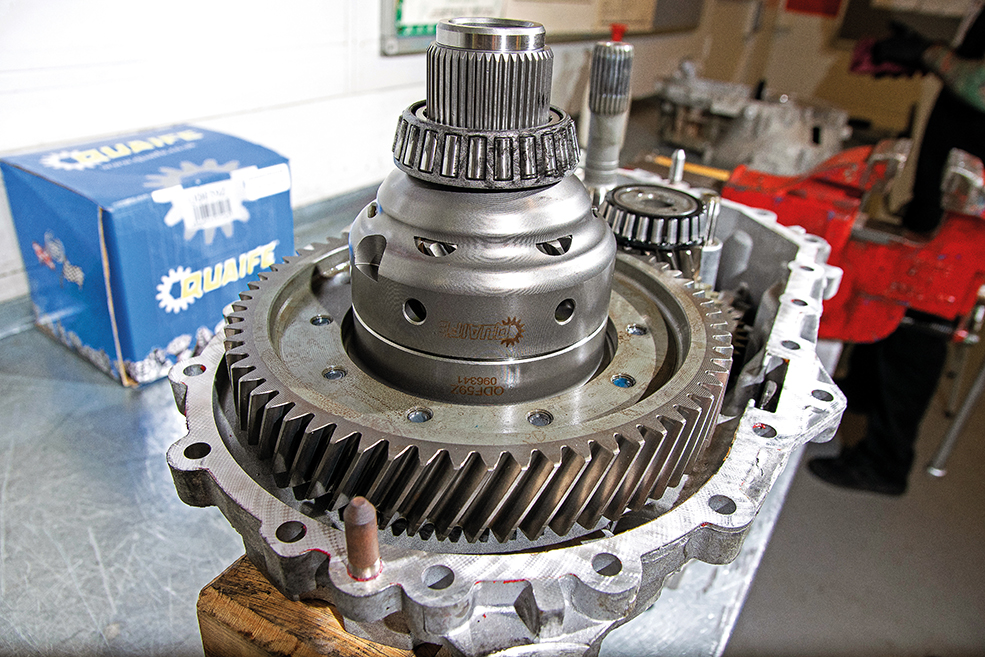 The RS’s 4WD system uses a Getrag MMT6 gearbox, which is durable even at higher power and when used hard. A set of shot-peened gears adds peace of mind for those running silly power and regularly abusing it on track, but if your RS isn’t an Edition model, then the first upgrade here should be to fit a limited-slip differential – it makes such a difference to the way car drives both on track and road.

The Quaife ATB is the most popular and is what Ford fitted at the factory, but another option is the Wavetrac unit available through specialists like Steeda. 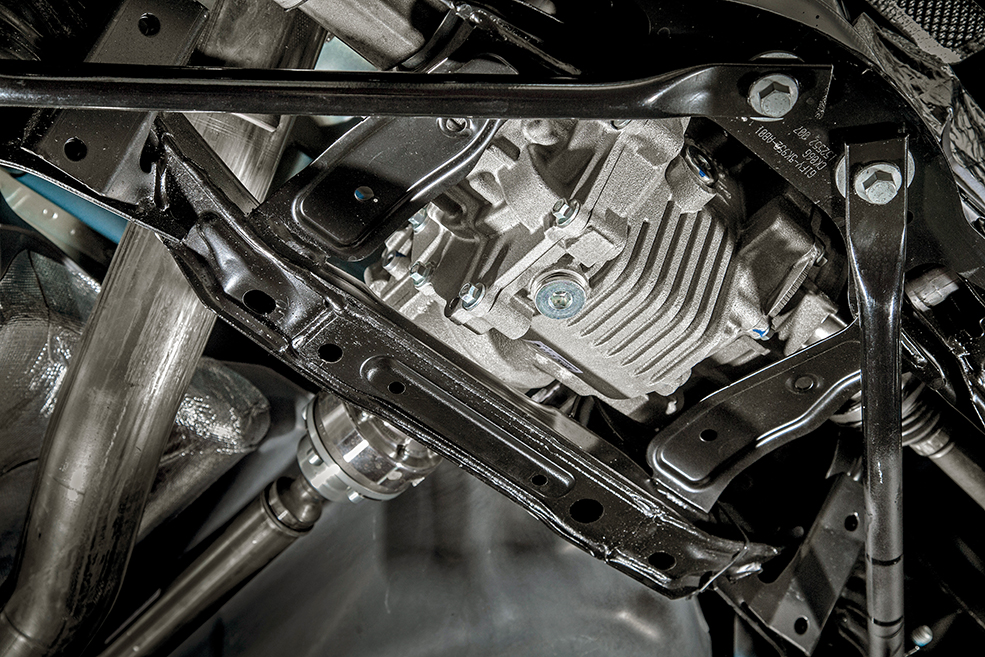 The rear differential unit houses the clever electrically-controlled clutch packs. It looks puny compared to rear axles of old, but you’ll struggle to break one. Mind you, that’s mainly because the clever computers prevent too much torque being delivered to it, and when it gets hot the ECU shuts it down and reverts to FWD spec. Diff cooler plates that direct cooling air across the differential are available, but given the rear diff (RDU, Rear Drive Unit in Ford speak) doesn’t actually have a temperature sensor – instead, the RDU is closely linked with the car’s ECU and infers a temperature based on a calculation of wheel speed, throttle position, and gearbox/PTU oil temperature – some will question their effectiveness.

That’s not to say tuners haven’t investigated the issue further; Mishimoto has a detailed blog on researching and developing a cooler kit that relocates the PTU temperature sensor to bring the inferred calculation back below the critical RDU shutdown point, but at the time of writing we aren’t aware of any complete diff cooler kits currently on the market. That said, as more and more owners venture on track, we don’t think it will be too long before we do.

One thing that is a no-brainer, though, is a decent quickshift kit. They make a huge difference to the feel of the car every single time you drive it; just make sure you choose a shifter with some weight in it to ensure a smooth, positive shift. 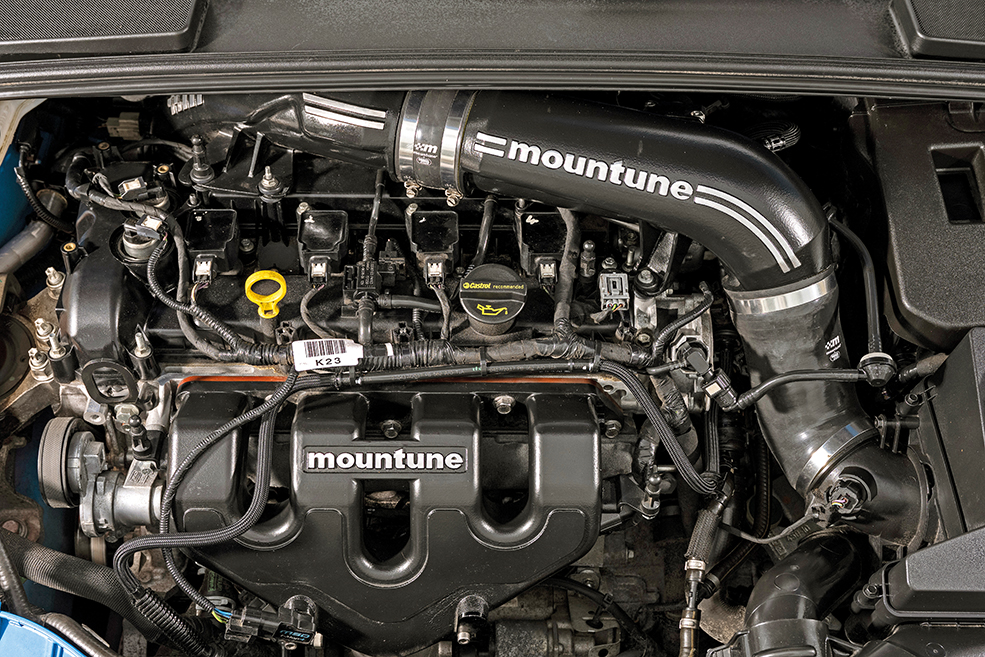 Big power is only a bank loan away

The 2.3-litre EcoBoost found in the Ford Focus RS Mk3 may be better known for internet hype surrounding head gasket issues and bottom end failures, but it has the potential to produce some seriously big numbers. Sadly, those internet horror stories do have an element of truth to them; if you’ve got an early model (pre-July 2017), make sure the head gasket issue has been rectified before you even start to think about tuning, and even then, start saving up for forged pistons and conrods if you want to enjoy hard driving without the fear of it all ending in a big oily mess.

Having said that, the standard bottom end is generally believed to be okay for around 400bhp (although plenty of standard cars have seen failures), and a decent remap (of which there are many to choose from), air filter, intercooler and pipework, and sports cat should give you around 400 to 420bhp.

With the EcoBoost utilising direct fuel injection, it does throw up the phenomenon of LSPI – low-speed pre-ignition. This is believed to be a contributing factor to many of the engine failures seen in the RS, and simple things like regular oil changes and always using premium 98/99RON fuels do seem to help on standard and first-stage tuned cars.

But for anything over 420bhp you’re pushing the limits. If you want to go further with your Ford Focus RS Mk3 tuning, it’s highly recommended to fit forged internals, and many tuners opt for a balance shaft delete at the same time. The stock turbo doesn’t have too much more than this to give either, but there’s a surprisingly wide range of bolt-on upgrades available, catering for everything from 450bhp right up to over 600bhp.

The EcoBoost’s direct fuel injection can pose a restriction when searching for higher power figures, but higher-flow DI fuel pumps are now available, or you can opt to fit a secondary port-injection system to supplement the fuelling when needed. The good news is that using the higher-flow DI setup, you can retain the very clever modern Bosch MEDG17 ECU. One thing to note, though, is the standard pressure sensors (of which there are two on the RS) only read up to 3-bar, limiting boost to under 2-bar or around 28psi. To safely run more than 2-bar of boost you’ll need a pair of 4-bar sensors like the tMap4 units that Motorsport Developments has developed.

Custom tuning will always be the best way on big-power applications, but we’re starting to see several off-the-shelf tuning kits already taking power to exceed 500bhp with ease. Full custom tuning can see you with over 700bhp, and this is constantly developing and evolving too. There’ll plenty more to come from the 2.3 EcoBoost in the coming years. 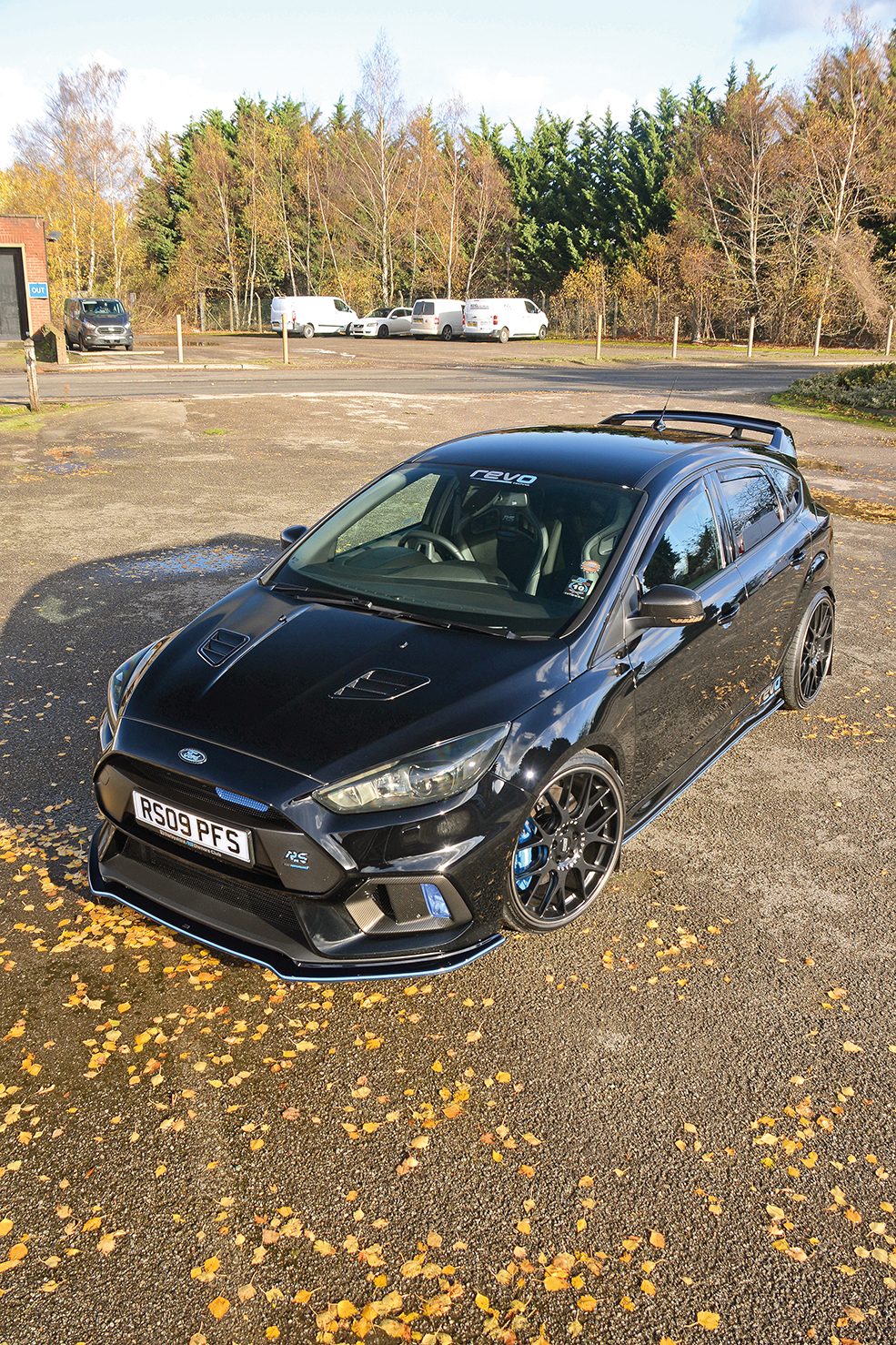 The RS already stands out from the Mk3 Focus range, but subtle additions such as a full lowline kit and splitters do tend to work well to create an aggressive OEM-plus style. Bonnet vents also look the part, although you’ve got to have a steady hand when cutting holes in your bonnet to fit them.

Carbon fibre is proving as popular as ever with the Mk3 RS, and complete panels (bonnet, front wings, number plate panel, rear diffuser, fog light surrounds) are available from a few different manufacturers. Or for those looking for a wild appearance, there are even wide-arch kits available too. 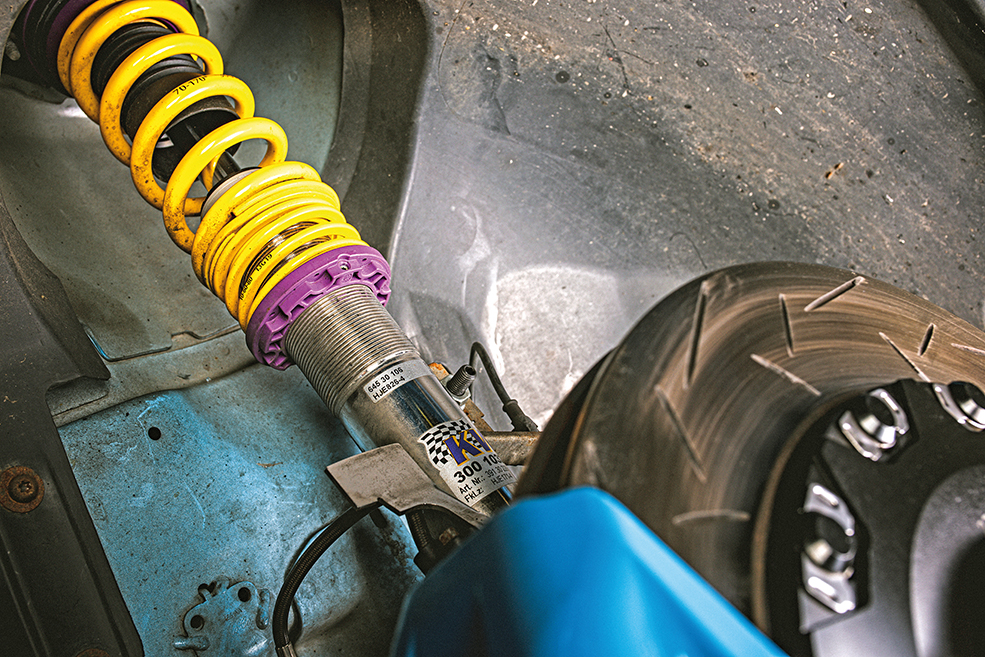 Like all modern fast Fords, the Mk3 RS’s standard ride is a little too crashy for the road, but it’s also too soft for dedicated track work. A set of lowering springs (Eibach or H&R tend to be the preferred choices) not only drop the ride height for a better stance and improved roadholding but improve the ride quality too.

Coilovers are an option for those who spend more time on track than the road, but you’ll need to add a cancellation kit to maintain functionality with the drive modes and prevent the dash from lighting up with error messages. Unless you fork out for KW’s DDC coilover kit, that is; it’s brilliant, works seamlessly with the different drive modes, handles fantastically on track, and even rides much nicer than the stock dampers on the road… But it costs over £2700.Other coilover kits will require the use of an EDC cancellation kit,

You can retune the OE dampers using an active suspension controller like the DSC Sport V1 to adjust the settings to better suit your needs. But at £1200 for the controller, many owners prefer to swap the OE dampers completely. 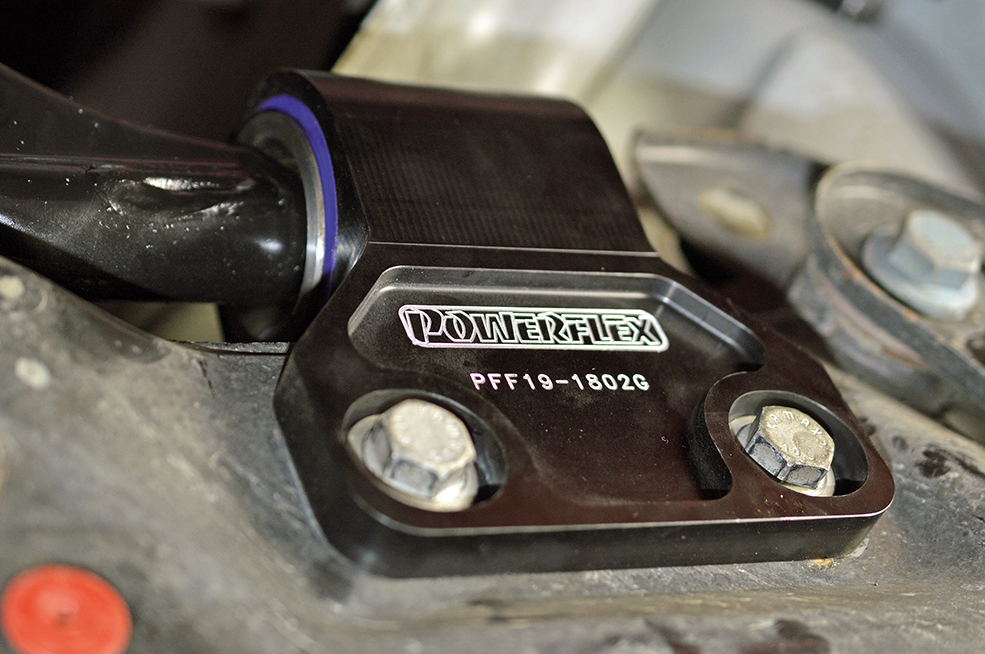 Stiffer front and rear anti-roll bars offer better control (especially on track) and sharper turn-in, without any noticeable side effects. So too do polyurethane bush upgrades; some of the rear subframe bushes are even offered as inserts to work in conjunction with the original rubber bushings for easier fitment.

At the front, it’s possible to alter the geometry for a sportier setup using aftermarket bushes too. Powerflex’s front wishbone rear bush comes in a CNC-machined aluminium mount that provides one extra degree of positive caster offset and 7.5mm anti-lift properties to improve handling and reduce torque-steer. They’re not cheap at nearly £430 (plus a few hours’ labour to fit) but it is a fit-and-forget solution.

To complement this, the front wishbone bush is also available as a camber-adjustable version offering +/- half-degree of camber via an eccentric bush mounting. This can be handy for fine-tuning setups, but many owners opt for the regular non-adjustable bush (at half the cost) and control the camber adjustment elsewhere, such as the suspension top mounts. 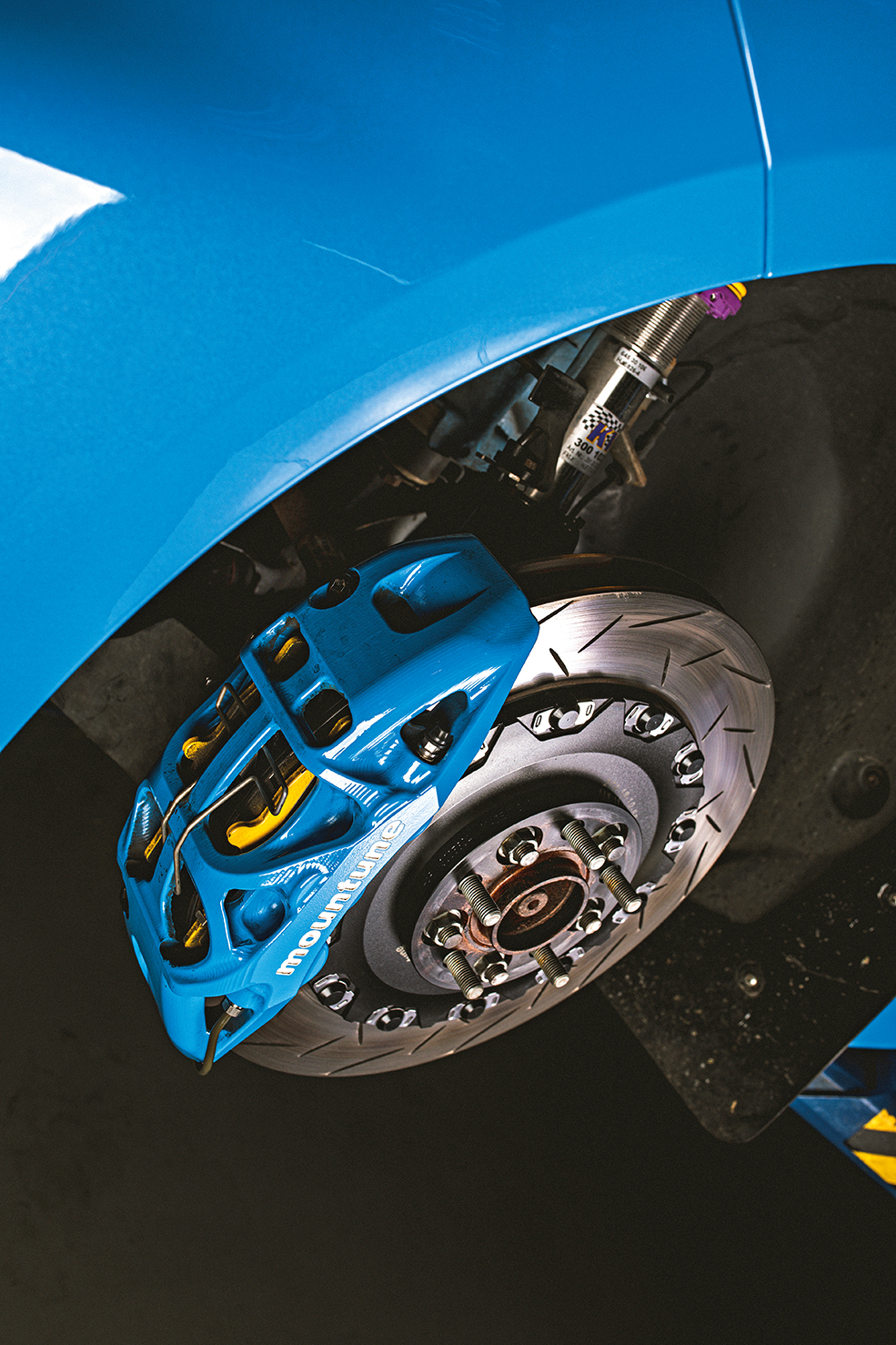 The RS’s Brembos are fantastic stoppers and rarely need changing even for regular track use. There’s a selection of performance brake pads available from experts like Tarox, so getting the right compound for road, track, or a mix of both is easy. Performance discs and braided lines complete the package.

You’ll be hard-pressed to find the limits of the stock callipers on a full road car, even on track, but for those that really do push the limits or have gone down the track-day route, big brake kits from tuners like Revo and Reyland Motorsport are also available, typically around 360-380mm diameter with six-pot callipers. Avoid anything that’s overkill, as all you’ll be doing is carrying around the excess weight for no reason. 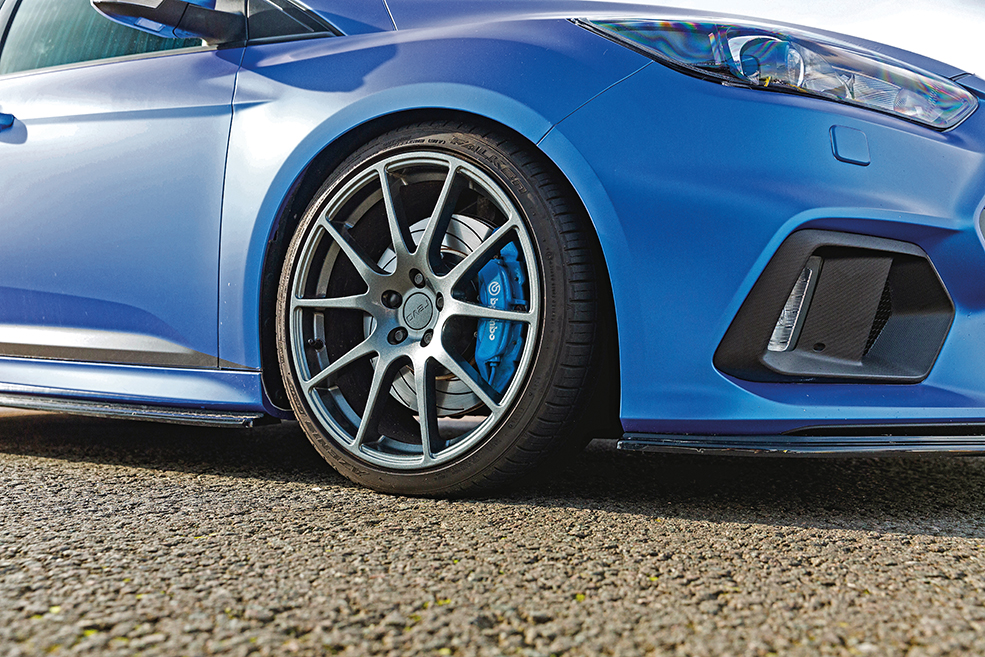 Most RSs came with the forged option alloys, but aftermarket rims are lighter

The factory wheel has an offset of ET50, but this can be reduced to ET45 (or even as low as ET35) without much concern – many owners fit 10-to-15mm wheel spacers without issue.

The RS is particularly sensitive to tyres, though; make sure the tracking is regularly checked (once a year is a good base) and keep an eye on the inner edges as it can chew through them at an alarming rate. It’s also wise to keep an eye on tyre pressures regularly; it’s been reported to cure a few of the tramlining issues some owners have experienced. By far the most important thing, though, is to fit decent quality rubber. It is an RS, after all.