For many Blue Oval fans, the ultimate hot hatchback, the Ford Focus RS Mk2 is a shouty, big-spoilered show-off with the balls to back it up. Here’s how to buy a bank-busting bruiser with everyday driveability, growling five-pot soundtrack and 1000bhp potential.

Why you want a Ford Focus RS Mk2

Why you don’t want a Ford Focus RS Mk2

RS badge or not, to your neighbours the image is the same as a Mk2 Focus ST – so put your baseball cap on backwards before buying.

Temptations to modify may not be ideal: huge power costs big bucks, it’s rarely useable, not necessarily reliable, and will devalue an original RS. And there’ll always be someone else going 1bhp better.

Owning the cleanest or lowest-mileage RS is nigh on impossible; investors have been buying delivery-mileage Focus RS Mk2s since day one.

September 2004 – Focus Mk2 introduced in Europe, with engines up to 2.0-litre. No high-performance option is available. 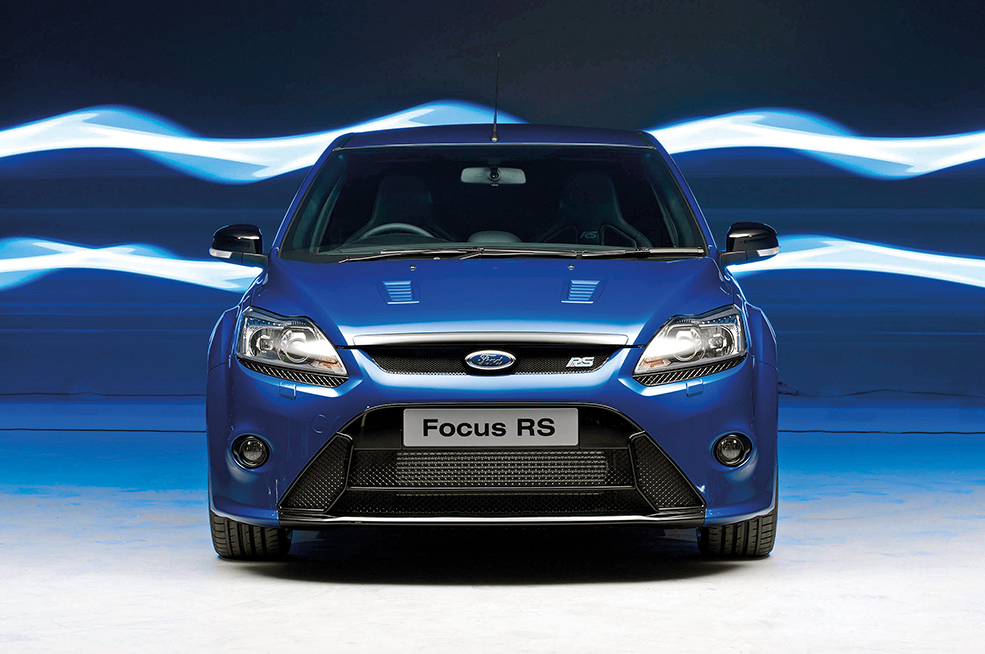 Strong and tuneable but beware of rough idle on a heavily-modified machine. Check the source of any oil leaks very carefully.

Almost unburstable, although the clutch won’t last forever, especially when driven hard. Check for clutch slip on the test-drive.

Rusty rear wheelarches have affected huge numbers of RSs, and damage is a big sign to steer clear. Stone chips are common.

The RS is a magnet for thievery, so double-check its identity. And be careful you’re not buying a fake, ringer or rep built from nicked bits – there are disturbingly large numbers around.

Beware of fakes, ringers and RSs on outstanding finance. A proper history check is vital (not just a cheap phone app), and an RS with full service history is worth extra cash. If there’s only one key, be suspicious.

Compare the identity numbers on the logbook match the VIN sticker (on the driver’s side B-pillar), chassis number (stamped into the floor beneath a flap in the carpet beside the driver’s seat) and tag affixed to the passenger-side dashboard (viewed through the windscreen from outside). If possible, connect an OBDII code reader to confirm the ECU matches the VIN.

A worrying number of RS replicas have been built based on lesser Focuses, so look under carpets and inner panels for evidence of a colour change. ST-based replicas are all well and good, but worth considerably less than an RS – and if built using components from a stolen car, could be seized by police. Worse still, a fake wearing an RS identity should be avoided.

If you fancy an RS500, ensure all the kit is present: satin-black wrap, black wheels, red callipers, bigger intercooler and airbox, uprated fuel pump, red seat stitching, plus hand-engraved plaque on the centre console. All production RS500s were built between May and July 2010, and the VIN should reflect this, starting in WF0GXXGCDGAJ (May), WF0GXXGCDGAU (June) or WF0GXXGCDGAM (July), followed by five unique numbers. 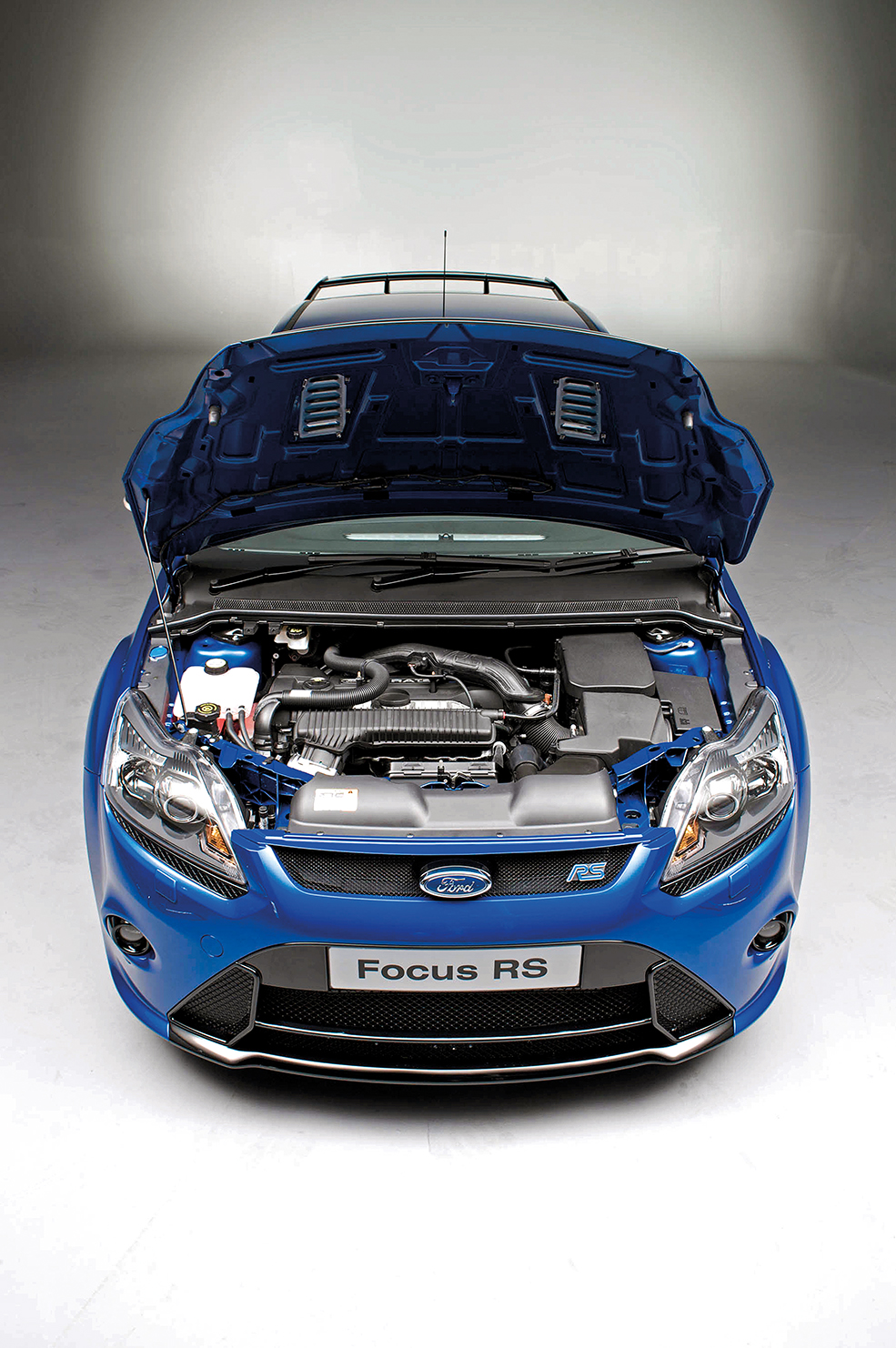 Volvo-sourced five-cylinder powerplant is an effective upgrade of the ST225’s unit – easy to uprate and virtually bombproof. Major failures are rare, and usually reported only in modified cars – hardly surprising because 1000bhp-plus is possible, albeit with loads of lag and destruction of various drivetrain components.

Cracked pistons or cylinder liners would exhibit symptoms of burning oil, head gasket failure or misfiring from a cold start. Make sure it’s not smoking, and beware of oil dripping around the oil filter housing – the diaphragm in the filter/breather can split, causing crankcase pressure to burst seals. At idle, remove the dipstick and listen for hissing. In contrast, and less worrying, a massive oil leak is probably coming from a grub screw on the cylinder head, behind the cambelt.

Many Mk2 RSs have been upgraded and later returned to standard, but don’t despair. Some Mk2s left the factory faster than others, so buying a tuned RS is sensible, although you’ll need to ensure the mods have been made by a reputable specialist. Around 450bhp is ideal for a road car on stock internals.

Researching RSs will show you stories of exploding inlet plenums (just two pieces of plastic glued together), which blew the bonnet vents off cars due to misfires. Yet Collins Performance has worked on hundreds of Mk2s, and never seen evidence of an exploded inlet – so if it was going to happen, it would have done so by now.

Check the service history – it should be yearly/every 12,000 miles, with auxiliary belts at 60k and cambelt at 100,000 miles. Keep an eye on fluid levels because a bad RS can glug one litre of oil every 3000 miles; coolant leaks are common – often from the radiator leaking at its corners (even on uprated rads) or hoses rubbing on engine mounts. 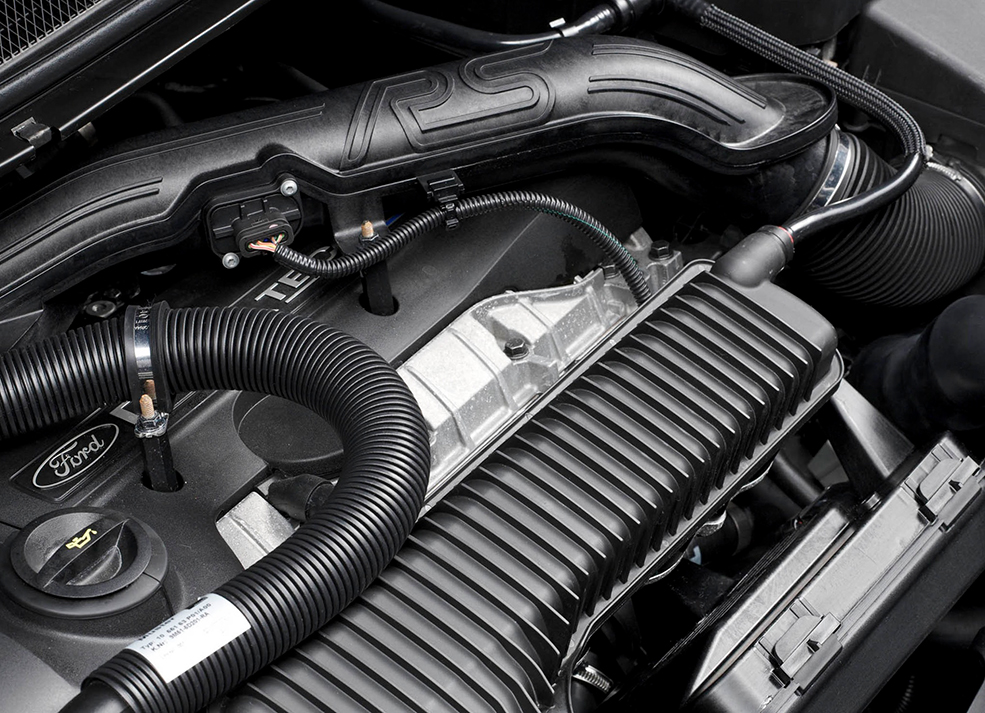 Beware of poor running – it may just be that your RS is on old software, but could equally be an ECU fault (probably after bad tuning or split wiring) or something amiss with an engine sensor. MAF, oxygen, fuel pressure and boost sensors all play up, with boost solenoids usually to blame for cutting boost pressure.

Listen for high-pitched whistling (like a squealing belt), likely caused by loosening exhaust manifold studs. They need replacing, not tightening – which can lead to them shearing off, meaning cylinder head removal.

Alternator failure isn’t unusual (check the battery warning light on the dash), and cooling fans sometimes fail due to corrosion. Inspect the loom for breaks and chafing – especially on a high-mileage machine.

Unburstable with a stock engine, the RS Mk2’s transmission isn’t quite so happy being asked to deal with massive inputs of torque – the stock Getrag Ford Durashift M66 six-speed will eventually break behind an 800bhp motor, and the driveshafts will disintegrate.

Of course, the standard clutch won’t last forever. It will survive 400bhp-plus even when abused, but you should expect it to require replacement at around 60,000-to-70,000 miles. Check it isn’t worn by taking a test drive in fifth gear and booting the throttle at 2000rpm; if the clutch is slipping, the revs will rise but the car won’t pick up speed.

Needless to say, a previously-modified (yet now standard) RS may have had a hard life, so be extra vigilant.

The stock Quaife ATB should cause no bother, and there should be no nasty noises. The standard gearchange isn’t great, but a short-shifter will improve the feel immensely. 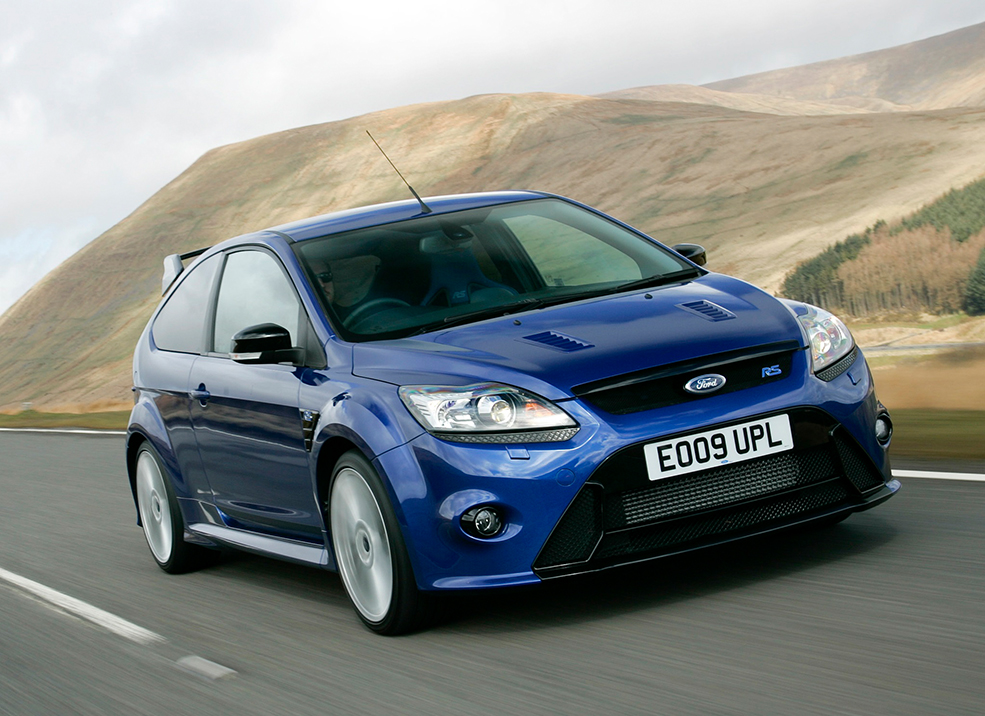 Evolutionary RevoKnuckle front suspension was what really set the RS apart from the ST225, but it’s not without its downsides.

Heavy tyre wear is typical, especially when the car is driven hard; expect the fronts to be tired within a few thousand miles. Good-quality rubber is essential, so if an RS is rolling on cheap Chinese tyres, it’s a sign of poor upkeep.

High-mileage machines are starting to show wear in the knuckles’ ball-joints, with perishing and clonking. RevoKnuckle units are hugely expensive, and even the joints are pricey; replacement isn’t simple. Likewise, front wheel bearings (a common problem; listen for rumbling) need to be replaced on a huge workshop press to accommodate the RevoKnuckles – not a job to be tackled at home.

Front lower arm bushes are weak, and prone to failure; get someone to reverse car and touch the brakes – if the bushes are worn you’ll see excessive movement at the front wheels. Polyurethane replacements are recommended.

Look underneath a well-used Mk2, and you’ll see lots of surface corrosion on suspension complements. Front subframes look particularly rusty; they’re the same as ST225 parts but with four white nylon insulators to space down the subframe. Check for splitting of the plastic. Replacements are still available from Ford.

Owners often report rattles and squeaks from beneath the boot, generally due to perished anti-roll bar drop link bushes (the RS has a Kuga rear subframe with uprated anti-roll bar, which positions the drop links at an awkward angle). Ford no longer supplies replacements, but aftermarket options are available; Whiteline adjustable drop links can be used, set to standard length if preferred.

Stock RS stoppers have 336mm front discs and 300mm rears, which should still be working well. If they’re worn, they’re pricey to replace, so ensure there’s plenty of meat left and there’s no juddering felt through the pedal. Slight clunking is probably the pads moving against the discs, and no cause for concern.

Beware of issues with the ABS system, particularly the wiring. Test by turning the steering wheel from lock to lock, and watching the dashboard instruments; if the engine management light comes on, the mileage display disappears and the traction control lamp illuminates, the car’s ABS wires are most likely torn and will need repairing or a replacement section of loom. If the ABS lamp stays on, it’s likely a wheel sensor or cable. 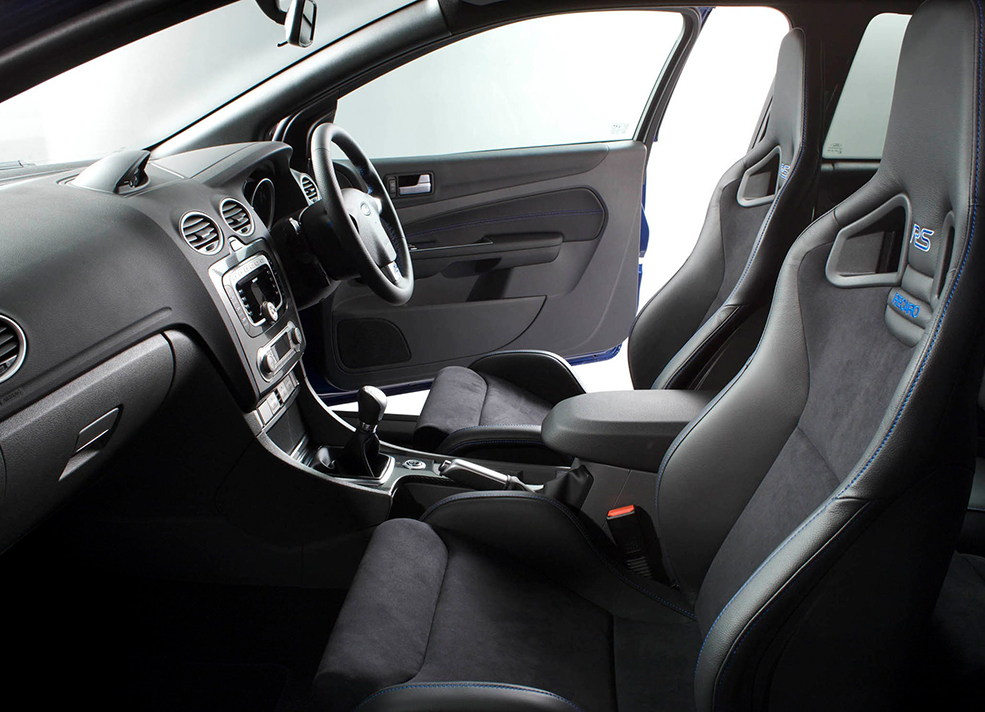 Recaro seats were standard in the RS, with colour-coded fabric panels to match the body’s paintwork – green with Ultimate Green, or blue with Frozen White or Performance Blue. Ebony partial-leather was optional at extra cost.

Seat wear tends to result from how the car’s been used, and the build of its driver. If the owner is heavy or regularly getting in and out, the bolsters may be collapsing and the fabric splitting. The solution is to replace the bolster foam and have the cloth retrimmed. Scuffed leather is easily touched in with specialist paints.

Some owners report the seats gradually reclining during use; this is a typical Recaro trait, and may be solved by replacing a fibre washer inside the adjuster knob.

Many people also moan about the high driving position. It can be dropped by removing the seat and using the lower mounting holes. Alternatively, extra-low seat runners are available, although they’re not cheap at over £350 each/£650 per pair.

The rest of the cabin is remarkably durable, and only begins to look worn with high mileage. Beware of any glowing dashboard lamps, and ensure they all light up when the ignition is switched on.

Check the air conditioning gets cold (condenser failure is quite common). DAB radios are known to cause trouble (sometimes cured with firmware updates), and central locking mechanisms occasionally fail; fortunately, they’re the same as any other Focus’s. 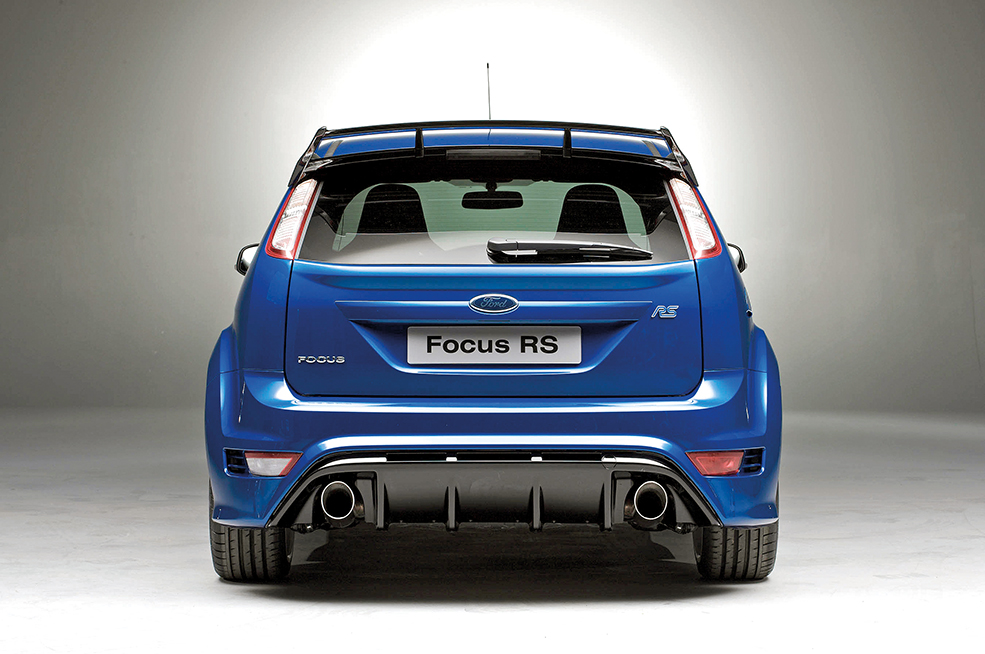 RS bodywork was exclusive, so prepare to pay heavily if any of the spoilers or specific panels are damaged. Wheelarch liners are a particular example – when new they were riveted together by hand to fill the wide RS arches, and many are now missing after the engine undershield has fallen off and they’ve dragged against tyres. Replacement liners are expensive, but you can make your own using two ST225 liners joined together.

Obviously, beware of accident damage (look out for poor panel alignment and dodgy paintwork) but don’t be concerned by stone chips (very common on the bonnet, bumper, wheelarches and skirts) or if the bodykit doesn’t match the shade of the metal panels – they were painted in a different factory before being fitted to each car.

Many Mk2s now have rusty rear wheelarches, notably the rear corners where they reach the bumper. Unlike STs, RSs don’t yet seem to be suffering from corrosion on the sills, doors and inner wheelarches – but it’s only a matter of time.

Examine the boot floor and spare wheel well for dampness, which can lead to rot. Rainwater tends to dribble in through the rear lights, roof rails, tailgate hinges or even the spoiler fixings. Rattling from the rear wing is remedied by securing with sealant.

Check around the headlights and grille for rubbed-away paintwork or rust, and ensure the bonnet lock works; the release mechanism is prone to failing. Make sure the washer jet covers are still in place – they tend to get stolen, and they’re more pricey to replace than you’d expect.

You probably already have a colour preference, but all shades are worth a similar sum. That is except Panther Black cars, of course, which were satin-black-wrapped as part of the RS500 package. Expect to pay double the price of a regular RS for an RS500, and don’t be surprised to see a tatty wrap: many have now been re-wrapped several times.