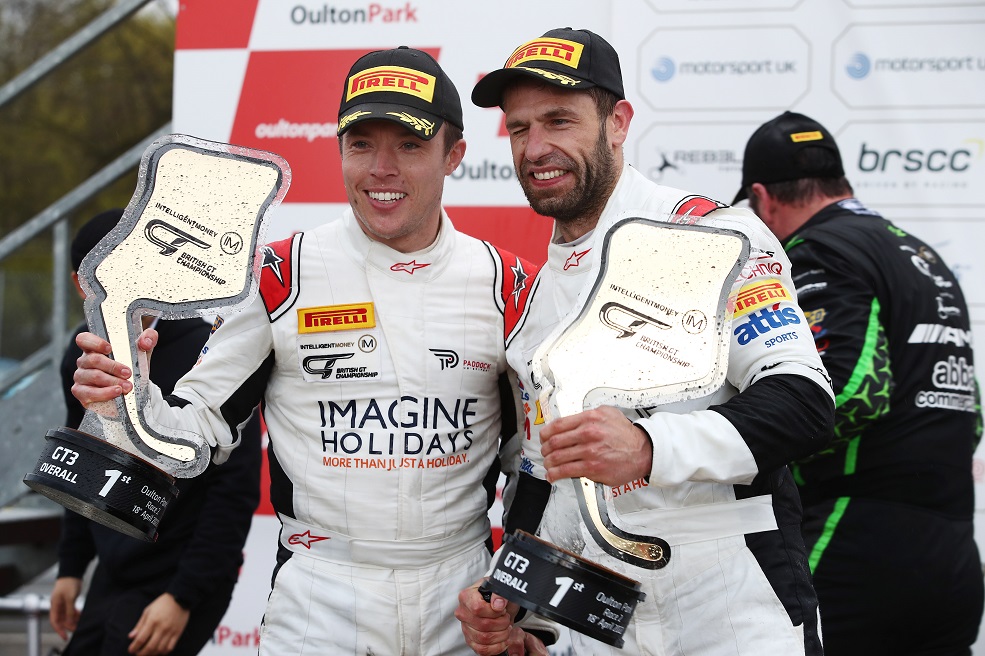 At Oulton Park for Easter Monday’s British GT curtain-raising double header, a race with claim to be the championship’s best ever was followed by one with claim as its strangest. And strange not merely because the victors were Kelvin Fletcher and Martin Plowman, winning overall for the first time in British GT.

Fletcher and Plowman – in a Paddock Motorsport team having its debut as a McLaren outfit and as a two-car squad – were not likely winners in advance, finishing Oulton’s race one 15th and starting race two 14th.

The second race though in effect became a 20-minute sprint for every pairing’s ‘Am’ driver. The Pro drivers’ opening stint of the hour-long contest was wiped, first by a lengthy safety car period after GT4 pair Moh Ritson’s Paddock McLaren and Freddie Tomlinson’s Assetto Ginetta collided at Shell Oils. Then the red flag flew during the half-distance pit window as amid sudden rain Jamie Caroline’s RAM Mercedes slid off before Druids, burying deep in the tyre barrier.

The race restarted with the order from before the pit window, all now with their stint-two drivers and assuming the mandatory stops were done. However pitstop penalties – for the top-three finishers from Oulton’s race one plus the 14 seconds for GT4’s Silver Cup runners – would still apply in full and be added at the end. It meant race two was on the clock as well as on the track.

This was bad news for race two’s frontrunning pair Ian Loggie’s RAM Mercedes and Shaun Balfe’s Audi. They also were the top two home in race one so had to add 7s and 10s respectively.

At first this looked OK for Loggie nevertheless as he led Balfe on track in first and had less penalty to take, plus Mia Flewitt’s 7TSIX McLaren in third was holding the rest back.

Yet Fletcher got himself into fourth behind Flewitt after Morgan Tillbrook’s Enduro McLaren was delayed by an electrical problem then Adam Balon’s Barwell Lamborghini served a 10s stop-go penalty after partner Sandy Mitchell hit Tilbrook’s partner Marcus Clutton under an earlier safety car.

Fletcher was able to clear Flewitt for third at Hislop’s chicane with 10 minutes left to get a clear track to charge in to. But he was 9.3s behind Loggie, more than the magical 7s range to finish ahead. Yet Fletcher then closed on the leaders incessantly and took the net first place with two minutes left. Loggie and Balfe, the first two home, dropped indeed to fifth and sixth in the final calculation.

And Fletcher was clear on the significance. “[It’s been] a challenging weekend. We always set the bar high [at Paddock] but we have to be realistic, we’re going up against some really quick combinations [who] are comfortable in their chosen vehicles. It was a tall order, but we just drove our hearts out,” he told Motorsport News.

Plus in the dramatic climax Fletcher was largely unaware of the time situation: “My earphones had completely gone so I just knew I was making a bit of a headway but I just wanted to get some good times in.”

Loggie wasn’t happy that the restart wiped partner Jules Gounon’s stint-one lead and appealed the result, but it stood.

Yet RAM’s penalty was nothing on Steller Audi’s GT4 race-one winners Sennan Fielding and Richard Williams who had a mammoth 24s to add, accumulated from 10s for winning race one and 14s for being a Silver pairing.

They also finished first on the road in race two but were third in the classification, as Darren Turner’s Newbridge Aston Martin Pro-Am partner Matt Topham came home second on the road well within range to win. Jack Brown, partnering reigning champion Will Burns in a Silver Cup Century BMW, was chasing Topham and also snuck ahead of the Audi.

“I never knew the gap to P1, they just let me do my thing,” Topham told MN, “and I’m glad they did because it took everything to stay in front of Jack. I thought it was a P2 [result] until they told me.

“I knew we were on for [victory] but when the Audi snuck past the GT3 BMW I thought ‘that’s it’, because I just couldn’t get past.”