Tesla CEO Elon Musk might not think too highly of flying cars, but hopping and hovering cars? Apparently, it may just be fair game. Oh, and you also need a next-generation Roadster with a SpaceX option package to do that. Responding with a tweet comment in a thread lauding Tesla’s impressive technology improvements over the years, the innovative tech entrepreneur teased today the next-gen Roadster may be able to hover “something like” the animated DeLorean from Back to the Future fame. Combined with his past mentions of using cold gas thrusters to enable short flight “hops” with a Roadster, one can certainly look forward to all the potential fun when first Tesla Roadster test drives begin in a presumed 2020.

The new Roadster will actually do something like this https://t.co/fIsTAYa4x8

The responses to the hover comment on Twitter immediately pointed to Musk’s colorful descriptions of flying car dangers expressed in the past:

“There will be zillions of these things flying all over the place and, inevitably, somebody’s not going to service their car properly and they’re going to drop a hubcap and it’s going to guillotine somebody…And it’s going to be noisy like a hurricane,” he said at a Boring Company event in May of last year.

Of course, the entrepreneur who always gives fun a serious focus with his products is not reneging on his concerns. He simply seems to have car performance and customer satisfaction in mind. He’d also like to continue adding features to completely ensure that the next generation Roadster is a “hardcore smackdown” to gasoline cars. Part of that secret sauce is owning a rocket company that’s engineered some amazing technology of its own. Why not use what’s available? 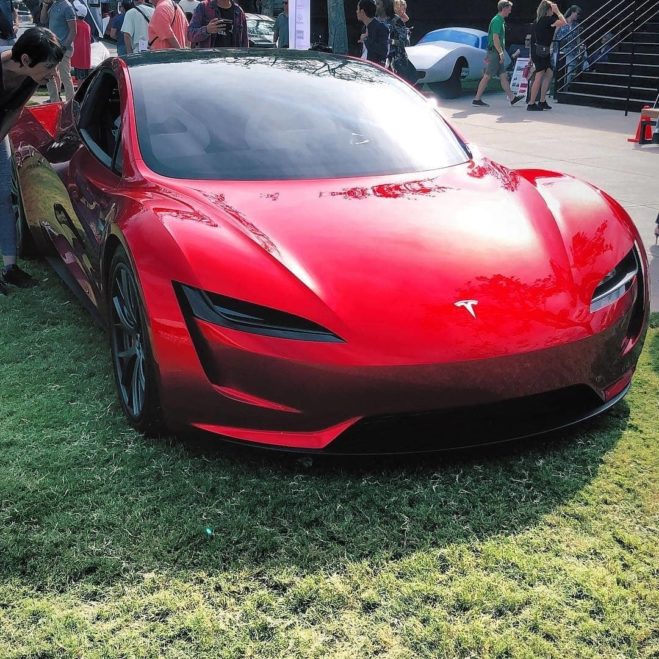 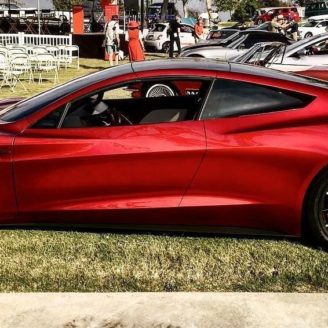 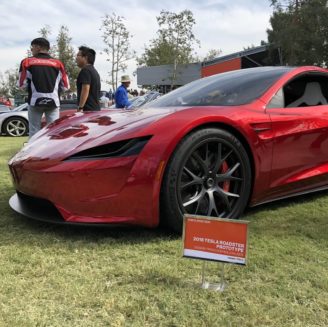 Tesla enthusiasts have been familiarized by Musk for some time now with his and the company’s plans for a “SpaceX option” package to be offered as an upgrade for the new Roadster. That package is said to include about 10 rocket thrusters “arranged seamlessly around (the) car” which would theoretically add to the vehicle’s braking ability (thrusters in front), speed acquisition (in back, to perhaps supersede “Plaid” and “Ludicrous” modes), and cornering (side thrusters). With the hovering capabilities, perhaps struggles with parallel parking will be a thing of the past for even the most hopeless at the task.

“Not saying the next gen Roadster special upgrade package *will* definitely enable it to fly short hops, but maybe …Certainly possible. Just a question of safety. Rocket tech applied to a car opens up revolutionary possibilities.” – Elon Musk, via Twitter

The SpaceX label on the Roadster option package is not just a nod to rocket thrusters, either. The high-pressure canisters used for the thruster propulsion will potentially be miniature Composite Overwrapped Pressure Vessels (COPV), the types of fuel containers used by SpaceX’s first-stage rocket boosters during re-entry and landing. Musk has also clarified that, if used, these COPV bottles would contain ultra-high pressure air that would “immediately be replenished whenever the vehicle pack power draw allowed operation of the air pump, which is most of the time.”

I’m not. Will use SpaceX cold gas thruster system with ultra high pressure air in a composite over-wrapped pressure vessel in place of the 2 rear seats.

Even without space-faring options, the next generation Roadster is going to be impressive. It boasts a top speed of 250+ mph, a 0-60 mph time of 1.9 seconds, a quarter-mile time of 8.9 seconds, a 200 kWh battery pack that gives 620 miles of range, and 10,000 Nm of torque from the electric hypercar’s three electric motors. It also seats four passengers, thanks to its 2+2 seating arrangement, although 2 of those seats will be sacrificed if the SpaceX option is selected to make room for, you know, rocket thrusters – or at least their hardware.

Even better for those whose car-buying budget is in the range is the starting price point – $200-$250k. Compared to the $1 million-plus for gas guzzlers with similar performance specs, you might just say that’s a bargain. The whole deal would make great advertising, only Tesla doesn’t have to do that. Oh, well. We’ll just have to get by with Musk’s Twitter feed and the occasional company announcement, some way, some how.