It’s been quite the week for Audi. In addition to the unveiling of their plans to work with Sauber in F1, the German marque has also placed itself front-and-centre in Ken Block’s latest viral video.

As the undisputed king of gymkhana content, every major release from Block and his Hoonigan crew pulls in some pretty major viewership figures. Now, after his split from Ford, it’s Audi’s PR department that seeks to reap the benefits.

Being the first feature to spawn from the new partnership, it’s fair to say that Audi wanted to arrive on the gymkhana scene with a bang. And that’s certainly reflected in the car that they built for the occasion.

Designed by Audi Sport themselves, the Audi S1 Hoonitron is the latest attempt by a car marque to persuade petrolheads that EVs can be cool too. And fair play to them, they make a pretty convincing argument. 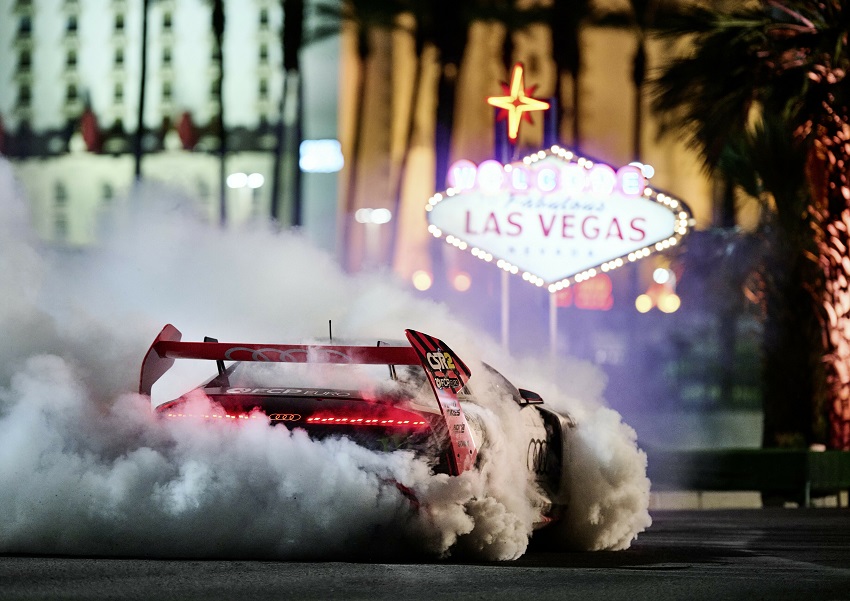 Its dual motors create a whopping 1400hp, which gets channelled to each of the wheels thanks to Audi’s trademark Quattro all-wheel-drive. The chassis, meanwhile, is made entirely from carbon fibre and complies to the strictest FIA safety regulations.

It passes the eye test too. That outrageous body shell has been styled to hark back to the old Audi Quattro S1 rally cars of yesteryear (hence the S1 Hoonitron name). In fact, although Audi was clearly keen to promote the future of its powertrain technology, it certainly didn’t shy away from its illustrious past either.

Instead of fearing to draw parallels between old and new, a large number of iconic sporting Audis can be spotted on the sidelines as Block slides his way around the Vegas strip. Classic Pikes Peak and IMSA vehicles serve cameos, as does ‘Mr Le Mans’ himself – 9x winner of the great French race, Tom Kristensen.

So, does an electric gymkhana car create the same sort of spectacle that we’ve grown to love over the years, or is it just not the same without a soulful exhaust note? We’ll let you judge for yourself – check out the full Electrikhana video below!