The Brabus P 900 Rocket Edition is here, and it’s got a spec sheet that’d make most other SUVs weep.

What happens when you take a Mercedes-AMG G63 and turn everything up to 11? Well, Brabus decided to find out.

The German tuning house has already offered multiple takes on Merc’s G-Wagen, but the new P 900 Rocket Edition is set to sit right at the top of that tree.

The Rocket nameplate is one that Brabus fans will be well-versed with and has only ever been bestowed upon the company’s craziest creations. So, what makes this pickup-SUV worthy of the title?

To be honest, the powertrain alone is enough to justify that red Rocket badge. The regular V8 found in a standard G63 remains in place, however in the P 900, displacement has been increased to 4.5 litres and a pair of bespoke turbochargers have been thrown in for good measure. The result is an absolute monster of a power unit, capable of sending 900hp to each of the truck’s four wheels.

Torque is electronically limited to ‘just’ 774 lb ft, and when all of that power is put to work alongside the 9-speed automatic transmission, 62 mph arrives in a supercar-rivalling 3.7 seconds. Like the torque figures, the P 900 Rocket’s top speed is also limited, to a perfectly sane and reasonable 174mph. 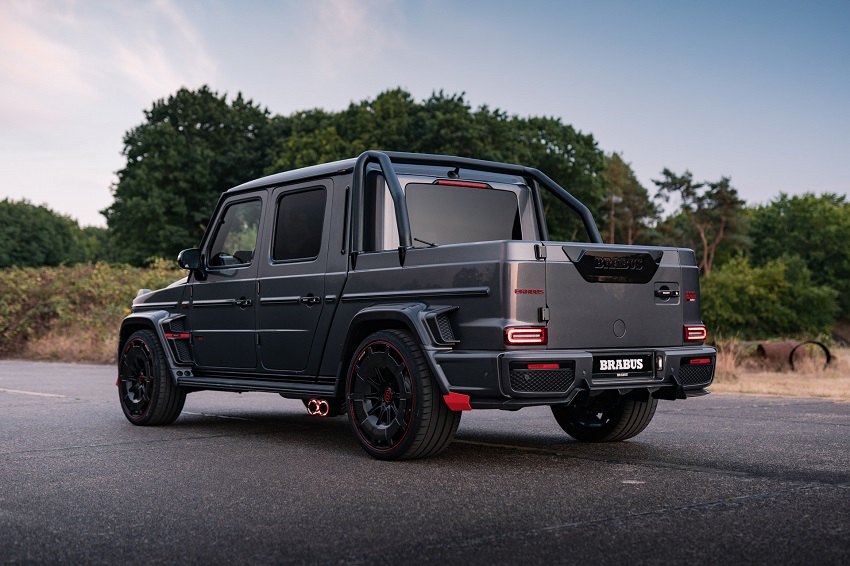 Now, it wouldn’t be a Brabus Rocket without some audacious styling cues to go along with the audacious performance, and this new edition certainly doesn’t disappoint.

On top of the typical Brabus bodykit, 24-inch rims and adjustable coilovers give this pickup an aggressive stance, and that suspension set-up isn’t just for show either. The ride height can be changed by up to 45mm, which should provide a tangible change in the way that the P 900 handles. Though, let’s be real, despite Brabus’ best efforts it’s still likely to feel like a bus through the bends.

As eye-catching as it is on the outside, the interior has also been designed to wow. The handcrafted cabin incorporates two-tone black and red leather upholstery, as well plenty of other red Brabus accents. Intriguingly, the bonnet has also been designed to feature a clear panel, giving the driver a glimpse down towards the eight-cylinder powerhouse at their disposal.

Only ten of these wonderfully wild machines will be put into production, but with a car like the Brabus P 900 Rocket, scarcity is surely part of the appeal.