The BMW E30 convertible has long been admired; but this BMW E30 with an S54 engine and SMG paddle-shift from an E46 M3 has got us a little hot under the collar…

Eastern Bloc motoring has been the butt of many a joke over the years, and this has always been a tad unfair. After all, Russian cars are some of the toughest machines ever built, for two key reasons: firstly, they have to be engineered to be reliable and usable in some extraordinarily tricky weather conditions while running on a patchy supply of fuel of wavering quality. And secondly, there’s an ingrained national perception that there’s no such thing as an unfixable car, so when they break down or get crashed or what-have-you, they need to be able to be mended with big hammers and swearing. The three-box Lada in particular (or, as it was badged in its domestic market, the VAZ) ought to be hailed by posterity as something of a hero.

You see, that rickety battler essentially planted the seed that grew into the startlingly rapid E30 drop-top you see here. How so? Its owner and creator, József Kiss, had a Russian-market Lada 1200 as his first car. “It had a very weak engine, but it was rear-wheel-drive,” he explains. And that detail is crucial… because the enthusiasm for being propelled from behind, along with a keenness for more power, created the logical stepping stones toward the magnificent E30 we have flexing on the beach for us right now. 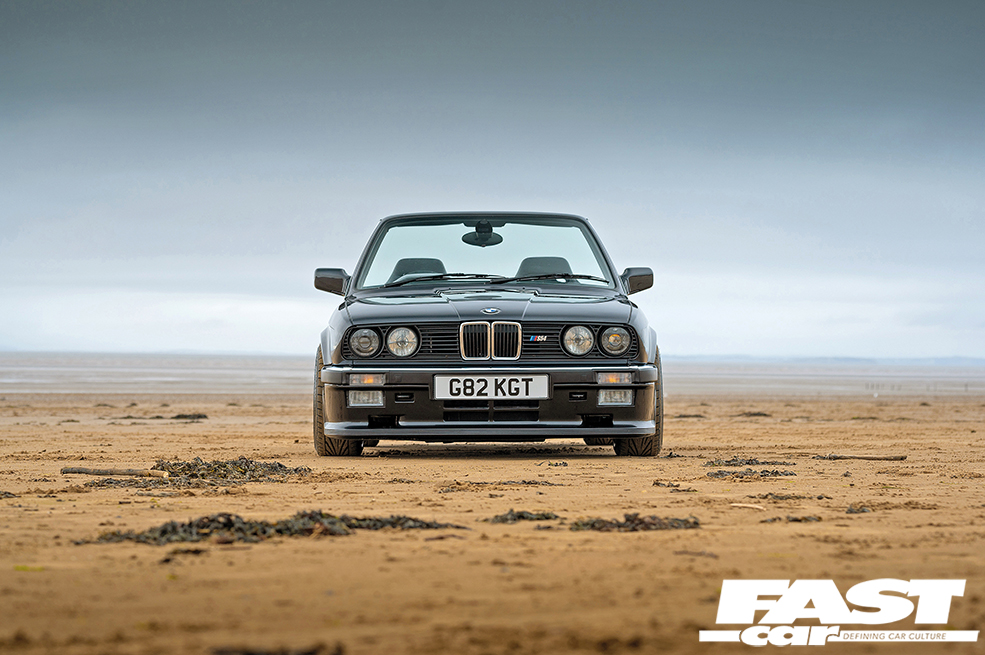 Today, József’s passion for rear-driven performance has led him a long way down that particular path, as he runs his own business, Kiss Motor Works (@kissmotorworks), undertaking everything from restoring classic BMWs to building and modifying M cars from a bare shell through to the finished product.

“I’ve been interested in BMWs since I was a kid,” he says. “I love German cars and engineering, and also how easily we can swap parts between the BMW models so I can make a car just the way I want it.” E30s have always been a particular favourite, ever since he used to watch a friend of his racing them, who then helped József buy one of his own – a 1984 323i. A few years down the line, he found himself building a 325iX Sport Touring with an S54 engine, and you can imagine just what an animal that was with an M3 motor and all-wheel-drive. Sadly that car had to be sold, but it really lit a fire in József’s affections, knowing how effective and entertaining it can be to put bigger-brother power into this endlessly willing chassis. And having never owned an E30 Convertible before, it seemed like the obvious choice for the next set of adventures! 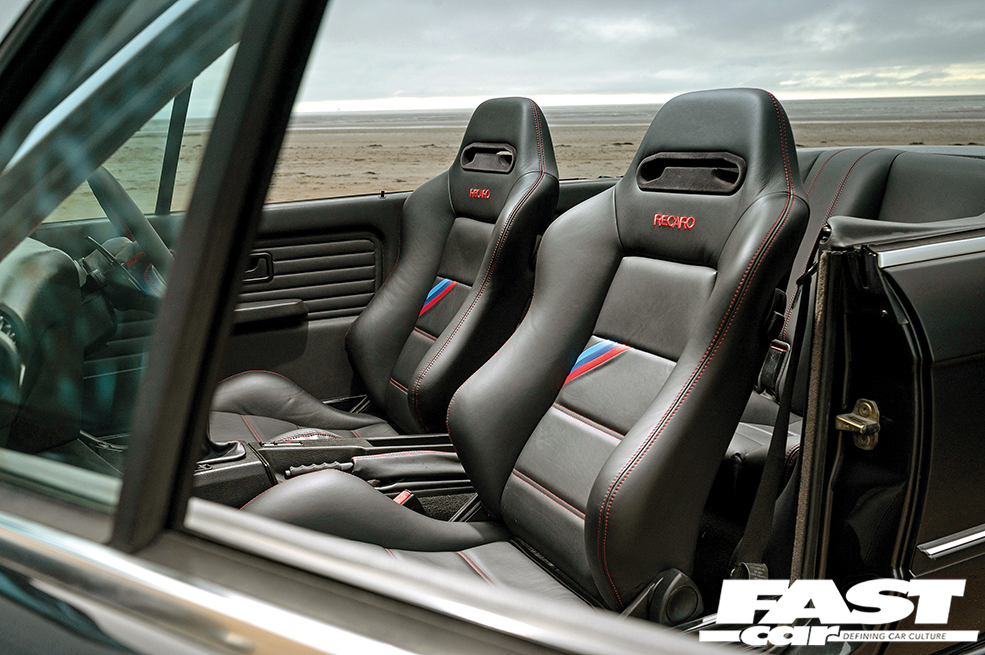 The drop-top ’80s 3 Series is a car that really came into being through sheer force of will; a convertible version of the E30 was never originally intended to exist, and when the model launched as a range of saloons and estates, wind-in-the-hair motoring appeared on no official Bavarian flipchart. However, suspecting that there may be a niche demand for a soft-top after the success of the roof-scythed E21, BMW commissioned Karrosserie Baur to develop one as an option, replacing the main roof skin with canvas. When it became apparent that an open E30 was something the public really wanted, BMW’s own engineers cracked out the can-openers quick-smart and crafted something elegant and sophisticated, a full convertible. This, as it turned out, was an absolute belter of an idea, and the things sold like hot cakes; there is still a decent number around on the market today, although it’s fair to say the quality can vary quite dramatically.

The car József lined up in the crosshairs for this project was found at a salvage auction in Southampton back in 2016; the chassis was pretty solid and the engine was running, albeit rather smokily. The body had some areas of corrosion to consider though, and the paint was pretty horrible, plus the leather seats were all ripped to hell. Very much a project then, but he knew from the off what was going to happen with this build. Well, kind of.

“I had a plan from the start, although I wasn’t exactly sure what it was,” he laughs. “I knew I had to fix the body and paintwork, and for sure I wanted to turn it into something special. At that time, I had a 2002 E46 M3 SMG Convertible, and I started thinking about making this drivetrain work in an E30.” And with that madcap idea scratched in the sand, it became something that just had to happen.

“I stripped the car completely back to the bare shell,” József continues, “and then I had to do the wiring loom for the engine and gearbox. I needed to do all this because I wanted to use the SMG gearbox. My plan was to use the E30 chassis loom and part of the E46 loom together, but I ended up with too many wires in the chassis – so I took out the E30 wiring and replaced it with a complete E46 M3 chassis loom. Obviously, I removed all the wires that weren’t necessary for the E30, and when everything was tested and working, I moved on to modifying the suspension and brakes,” he says. 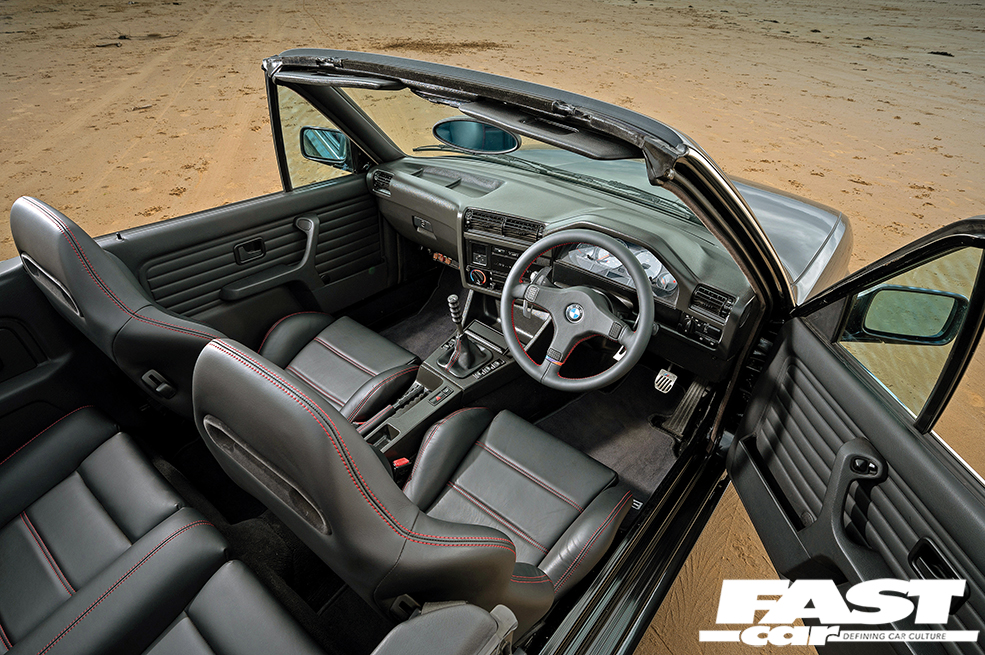 As you’d hope of an intelligent engineer, he wasn’t just going to drop an E46 M3 motor in this older cabby and cross his fingers – this was a holistic project from the outset, and the chassis would have to be comprehensively beefed up. József set about adapting a full braking system from an E46 M3 to fit the E30 platform, employing E36 M3 Evo front hubs and lower arms, along with a set of fully adjustable E36 HSD coilovers.

“I had to modify the front subframe to keep the original sump, that was the first challenge,” he says. “The rear end is from an E36 Compact. I wanted to keep the engine in factory-standard form, so the only modification is the diff – it’s a 188mm medium-case eight-clutch LSD with 45% locking and a 3.91 ratio for quicker acceleration. Oh, and a few mods to the exhaust manifold and velocity stacks for the throttle bodies to make more noise!” 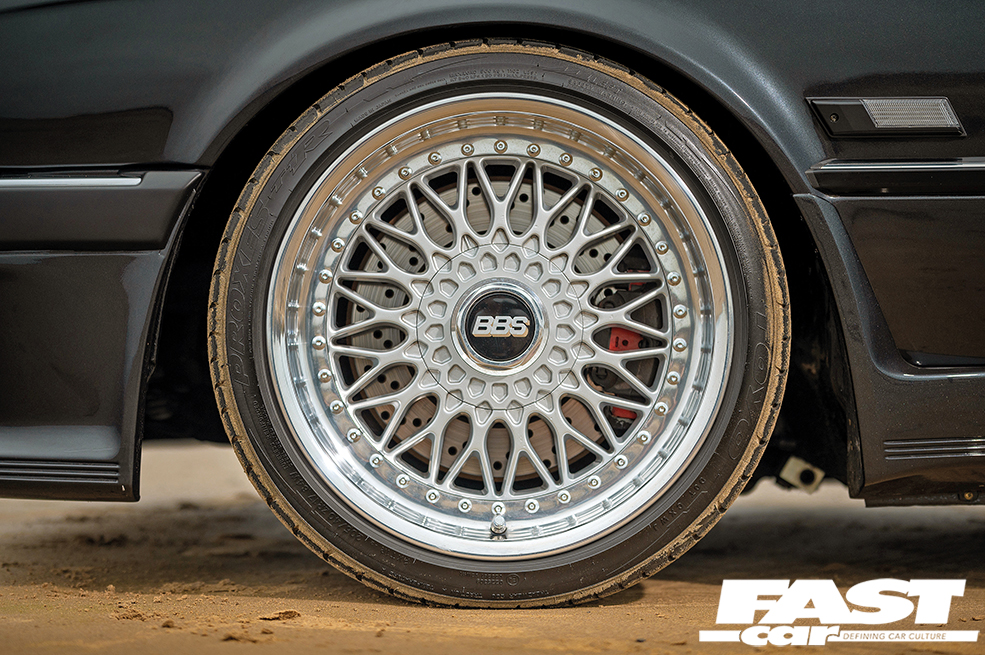 With the swap to E36 M3 front hubs and Compact rear end, the PCD was changed from 4×100 to 5×120 to allow a wider breadth of wheel options, and József ultimately opted for a set of staggered BBS Style 5 split-rims of the type found on the E31 8 Series. These were sourced by a mate in London, then shipped out to Poland for a full refurb with new bolts, polishing, painting of the centres and modified aluminium centre caps. The choice of OEM+ wheels was a smart one, as the evolution of the project had made József increasingly keen to pursue an aesthetic of stealth, creating something that could feasibly have been built by BMW themselves. With the rust eradicated and the body perfected, the shell was repainted in its original factory shade of Diamond black (a task carried out by a good friend in Hungary; it was such a painstaking and fastidious job that it took over a month), before being adorned with an original M Tech 1 body kit and BBS rear valance.

This astounding attention to detail continues through the interior, where we find a set of Recaros from an E30 M3 Sport Evo. “These were so hard to find,” says József. “I eventually tracked a pair down in Birmingham, and we sent the whole interior to Poland for a retrim. I fitted the E46 M3 speedometer, but it was smaller than the original, so I had to make some modifications to achieve the correct factory look. All the switches are from the E46 M3, with 3D-printed surrounds to tastefully integrate them, and the handbrake and gear knob are also 3D-printed. All of this was designed and printed by myself.” 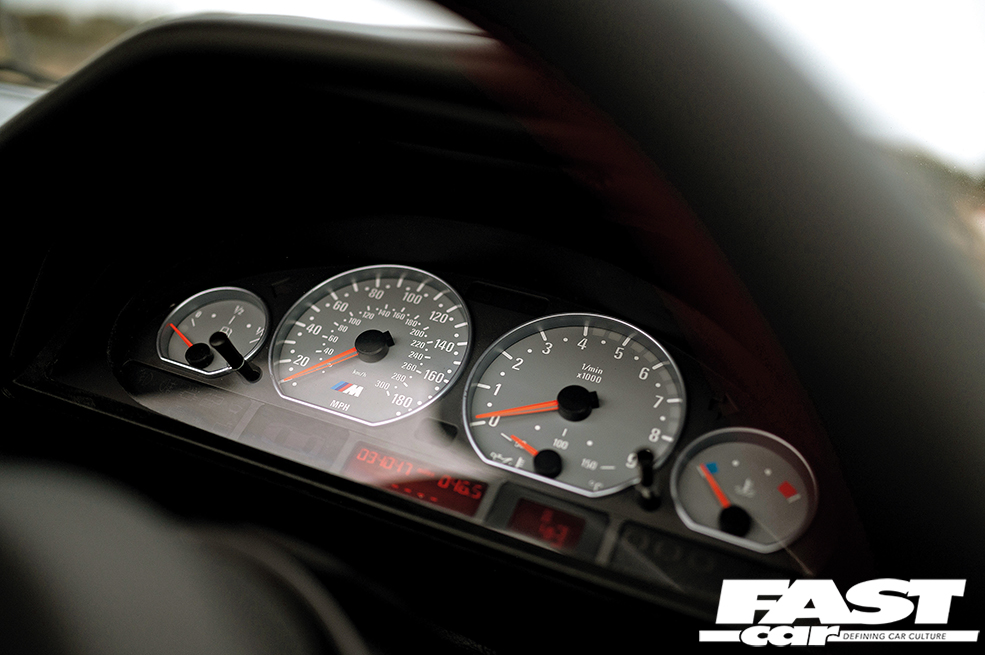 Perhaps the coolest element of the interior is the custom steering wheel. With the whole car having an M Tech 1 style, it made sense to have the steering wheel to match, so József found a ratty old one and had it retrimmed to match all the new leather, then cunningly wired in a set of paddle-shifters to control the SMG transmission. And that’s not something you see in a BMW E30 every day.

“It took me two years to finish it, and then my dream car came true,” he smiles. “I just love having that engine with the SMG gearbox in the E30, it makes the car so much fun to drive. Amazing engine noise, and with the higher-ratio diff, it’s quite aggressive.” He’s got a few more plans of course because these things are never really finished, and then there’s the next project in the pipeline, an E46 M3 to be fitted with a V10 and DCT ’box. That old Lada definitely has a lot to answer for – it started József off down a righteous path, and those early hankerings for more power have spiralled into something wonderfully chaotic. BMWs that are insanely powerful and tougher than Ladas – for a certain niche of enthusiasts, there’s no more stirring dream than that. 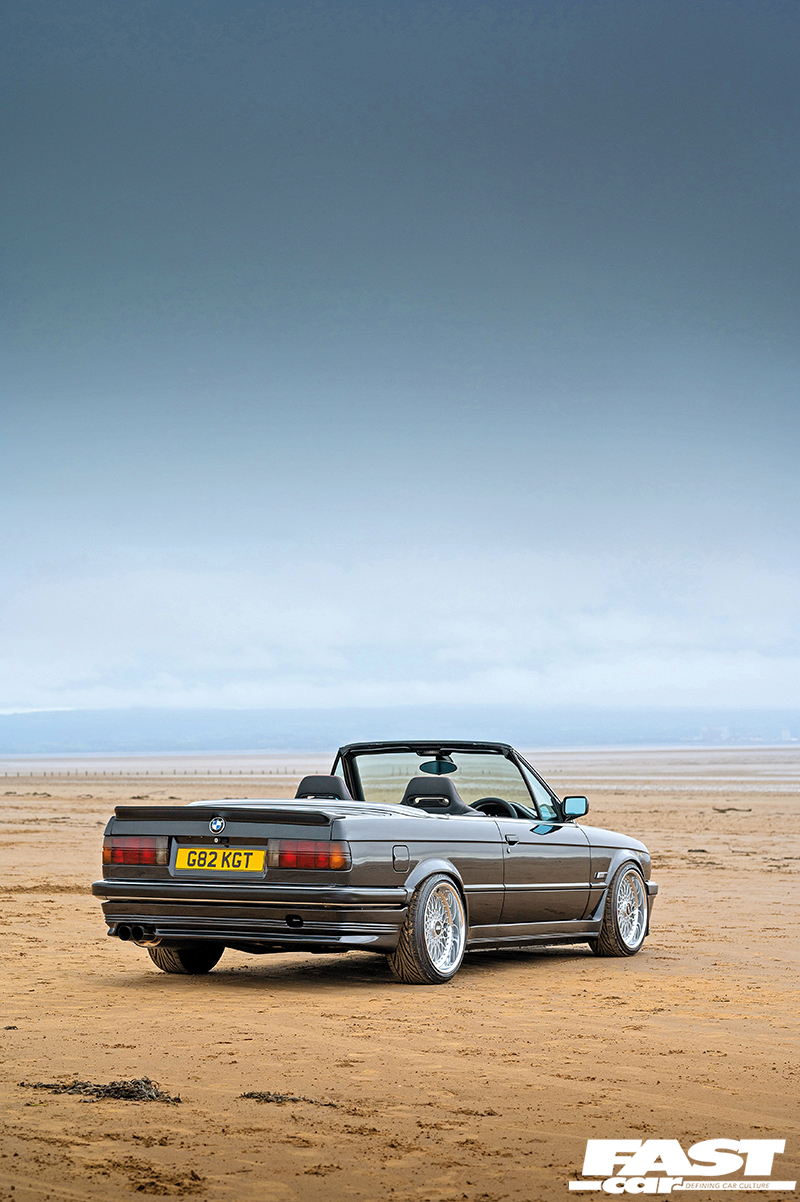