This wild 700whp turbo Barra-swapped BMW 2002 drag car is a purist’s worst nightmare, but for those open-minded enough to be able to appreciate the wonders of the modded BM world, it’s a build to be in awe of.

Okay, so you’ve probably got a lot of questions right now. The first one might be ‘What on earth…?’ The second one might be ‘Why?’ And the third might well be ‘What the hell is a Barra?’ And that’s us being bold enough to assume that you’ve spent that long staring at this otherworldly 2002 build and haven’t just skipped this feature out of sheer purist horror. But for those of you still here, those are very good questions, and between ourselves and owner Jonas Andersson (@jonasandersson92), we’re going to do our best to answer them.

So, where on earth do you begin with a build like this? It seems like starting with the owner like we usually do would be a good idea because maybe we can get an idea of what sort of person builds a 2002 like this. If you’ve glimpsed the number plate in the photos, you will have realised that Jonas and his monster ’02 are from Sweden, which explains things a little because over there, anything goes when it comes to BMs. In fact, it seems like if you’re not running some massive turbo BM build in Sweden, you might well be the odd one out. On the face of it, Jonas seems pretty ordinary: he’s 29 and is a crane mechanic and drive forklifts, and there are no signs that he might be somewhat unhinged because this 2002 is not the creation of your average BMW enjoyer. 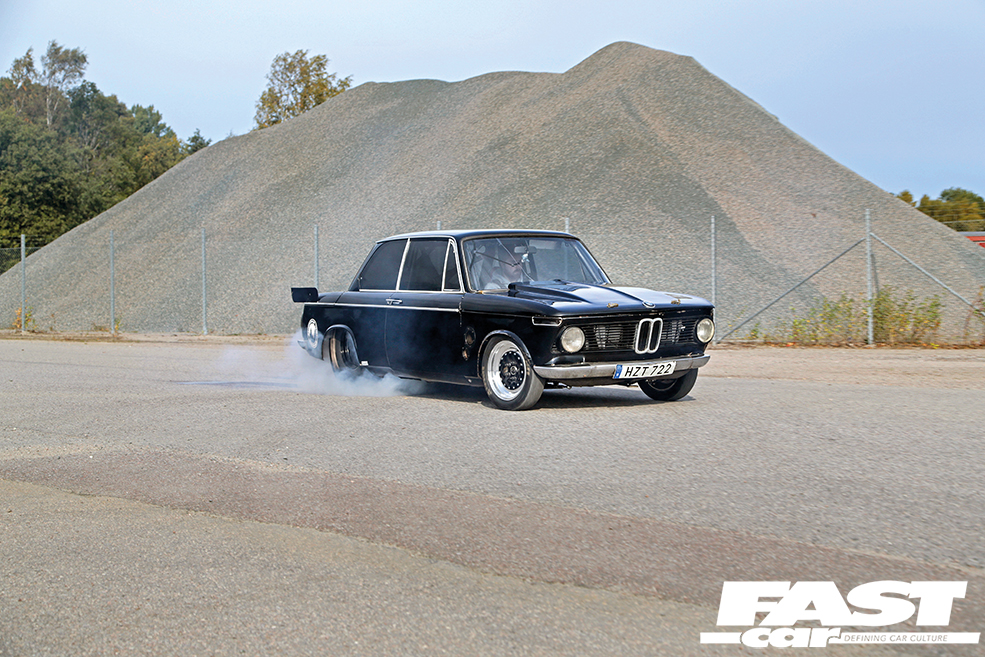 “I’ve been interested in BMWs since 2010,” Jonas tells us. “I don’t know why, but I love them,” he adds with a grin, and there doesn’t need to be a why, the fact alone is enough. Jonas’s first BM, and his first car, in fact, was an E30, so he’s clearly got taste and a taste for the classics as if the 2002 that’s staring you down right now wasn’t proof of that. Okay, so we’ve established what kind of person builds and owns a car like this, but there are still a lot more answers that we’re rather keen on. The most important thing about this 2002, is that Jonas didn’t chop up some perfect concours-winning example; “I bought the car as a rolling chassis without an engine or gearbox, and it was ready to fight,” he grins. And as for the why, well, it’s not surprising to learn that there was a plan, because this isn’t the sort of car you just happen to casually build on a whim. “The plan was always to build the car for street racing and drag racing,” smiles Jonas, and he’s put together an absolute beast of a classic BM. 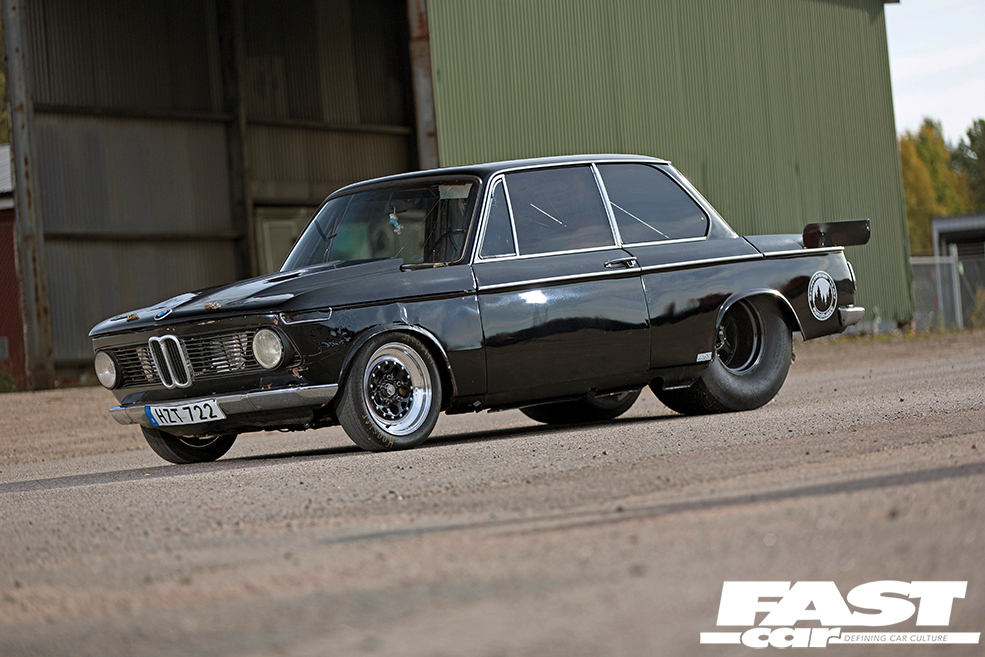 If you’re going street racing and drag racing, then, obviously, you want power, ideally as much as you can possibly make, and that’s where the Barra comes in. So just what the hell is a Barra? It’s a 4.0-litre straight-six engine produced by Ford Australia between 2002 and 2016, named after the barramundi (the Asian sea bass). It might seem like an unusual choice of engine, but the Barra enjoys a huge amount of aftermarket support over in Oz and is known for being able to handle massive power, making this mighty straight-six an ideal if oddball choice for Jonas’s BMW 2002 drag car build. Obviously, even the strongest factory engine requires some serious upgrades if you’re aiming for some truly stratospheric numbers, and this Barra has been taken to the next level. 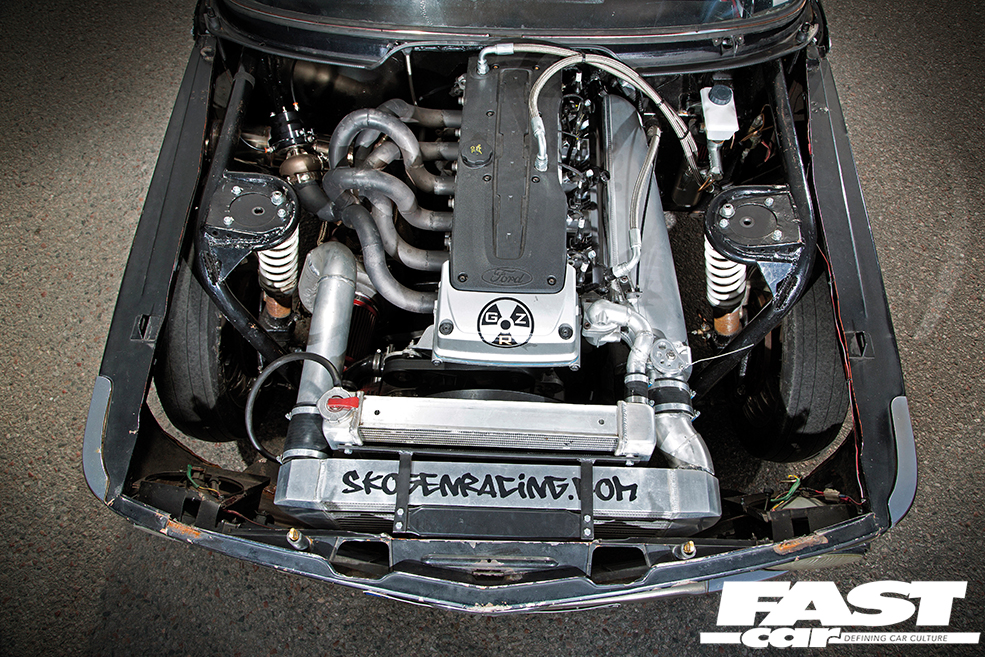 “The engine is built for around 1500hp, it is only the crankshaft that stops it right now, so I have to stay at 1200hp approximately,” says Jonas casually, and don’t you just hate it when your crankshaft means you can only run 1200hp? The engine is a Barra 195, meaning it started out life as a 195kW (261hp) NA motor, except it’s now obviously no longer naturally aspirated, as Jonas has strapped a honking great BorgWarner S475 billet turbo to it, along with a Precision 66mm wastegate, a homemade exhaust manifold, a billet Plazmaman intake manifold, no less than three Bosch 044 fuel pumps, absolutely huge 2200cc injectors, and there’s MaxxECU Race engine management looking after everything. 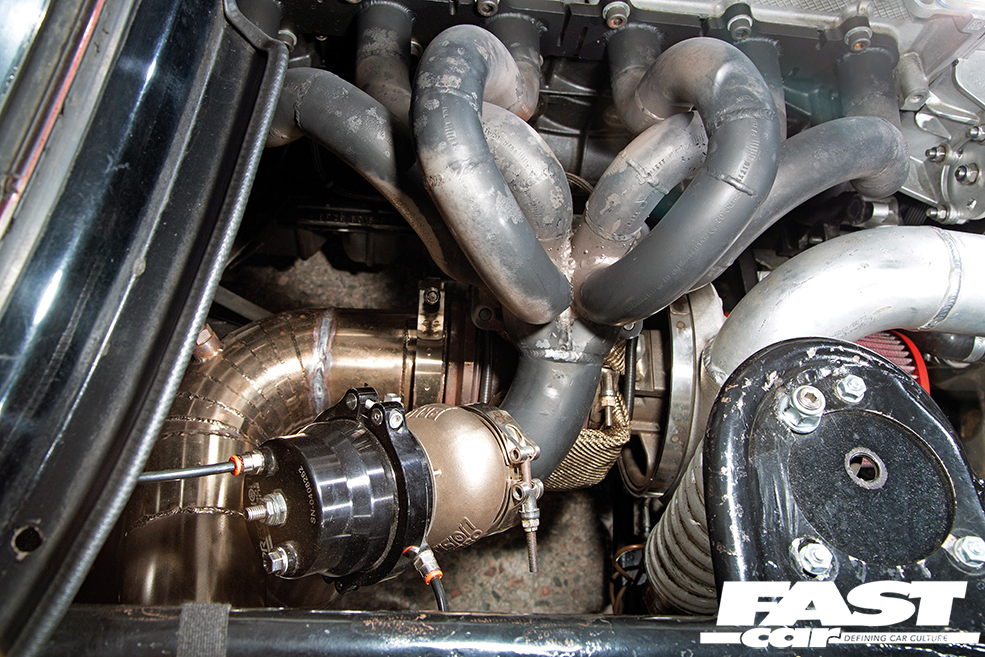 That’s all well and good, but there’s so much more here that it’s almost too much to take in. The engine block has been partially grout-filled, which involves partially filling the water jackets to add strength to the block, and has been equipped with a Ready2Boost kit, which comprises an Atomic billet oil pump gear set, an HD timing chain, head stud kit and balancer bolt kit. There are drag racing beehive valve springs, Atomic titanium retainers and Stage 4.5 camshafts, ARP 12mm head bolts, Spool I-profile con rods, Cosworth piston pins and ring kit, ACL main bearings and con rod bearings, an Atomic Torrington crankshaft bearing kit, and fire-ring gaskets and copper head gasket. There are also ARP 8470 main bolts, a Ross harmonic damper, an Atomic Barra hardened induction crankshaft sprocket, billet oil pump and adjustable VCT Chromoly vernier cam gears. Jonas has put in an incredible amount of work to make sure the engine can withstand the sort of power he’s aiming for, and even if it’s not hitting those numbers just yet, it’s all in hand. “It made 700whp with a bad exhaust cam, and I’m making some changes to hit 1200hp this year,” he smiles. 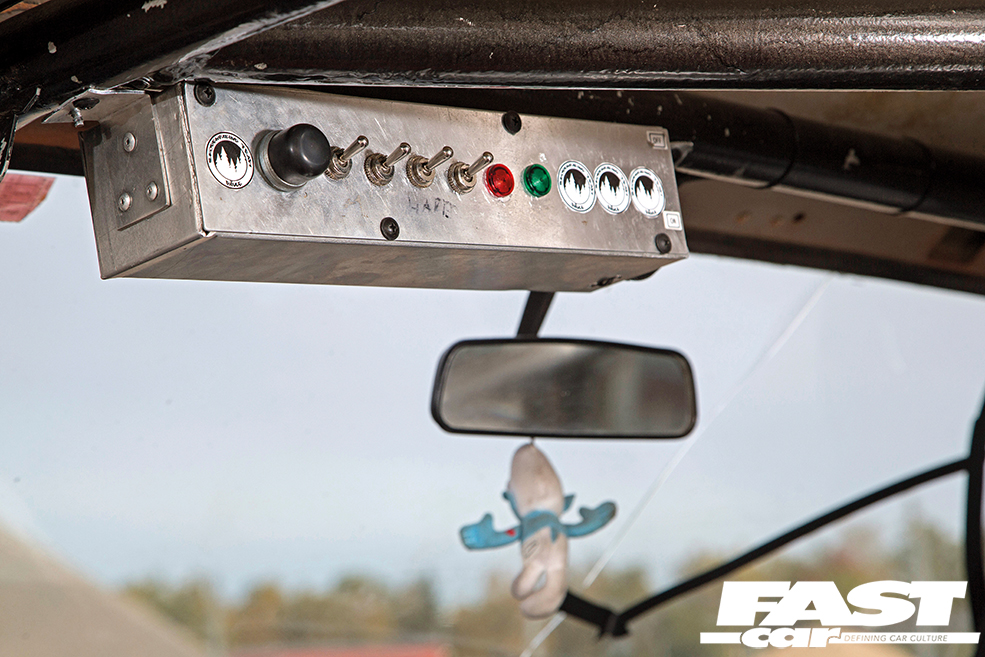 These sort of figures would cause an ordinary 2002 to simply fall apart at the seams, so everything else on this car has been chosen to help keep it all together and to put the power down. Beneath the body sits a tubular chassis, and Jonas is running a Volvo 240 front axle setup with QA1 two-way rear coilovers. The 2002 runs narrow 15” front wheels with Hoosier drag tyres and massively wide rears that are wrapped in 32/14-15 Mickey Thompson ET drag slicks. That translates to 361mm across, which gives you an idea of just how much rubber this 2002 is putting to the tarmac, and how serious this build is.

The exterior looks relatively stock, in that you can tell it’s still a BMW 2002, but obviously, there have been a few changes. There’s a removable bonnet with an elevated central section to allow it to clear the Barra beneath, and the passenger-side front wing has two holes for the exhaust and screamer pipe. At the rear sits the massive spoiler with support struts, plus a parachute, naturally, and the windows and lights have also been tinted. 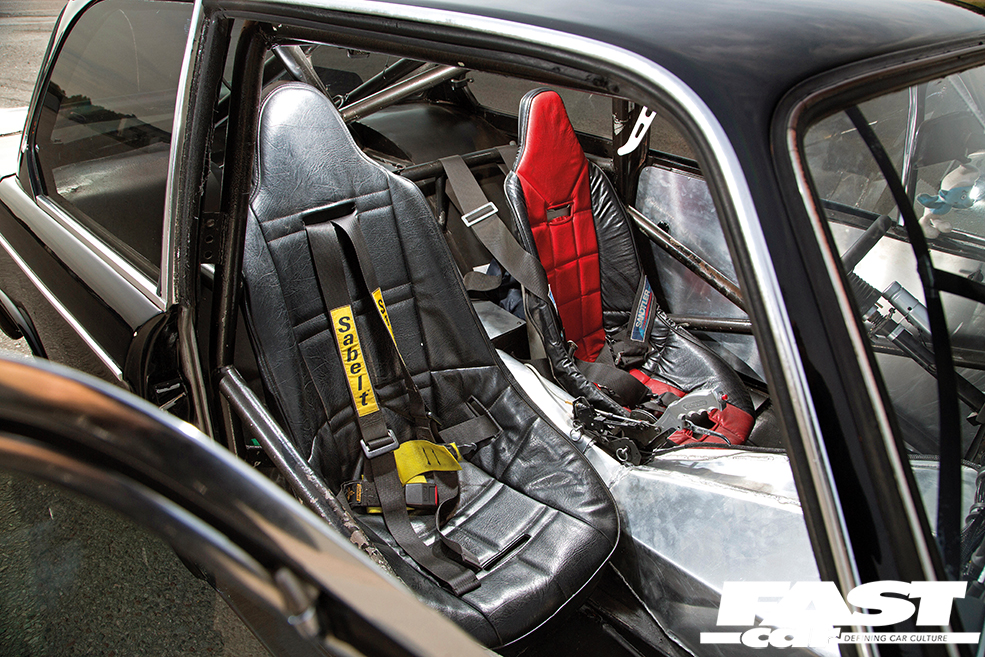 The interior, meanwhile, is devoid of anything that isn’t required to drive the car and survive in case of an accident. The cabin is dominated by the massive custom transmission tunnel that covers the TH400 three-speed gearbox, and entry requires that you clamber over the roll-cage, which covers the entire interior. The door cards are just bare aluminium sheets with the minimum requirements to open the doors and the windows, and there are two lightweight racing bucket seats with Sabelt harnesses. A Lenovo display replaces the instruments, and there’s no hint of a dashboard, with the essential switches mounted overhead in a custom control panel. Then you’ve got the Hurst shifter and the parachute release lever mounted on the roof panel. It’s exactly what you’d expect from the interior of a drag car, and it serves up all the safety and functionality that Jonas needs. 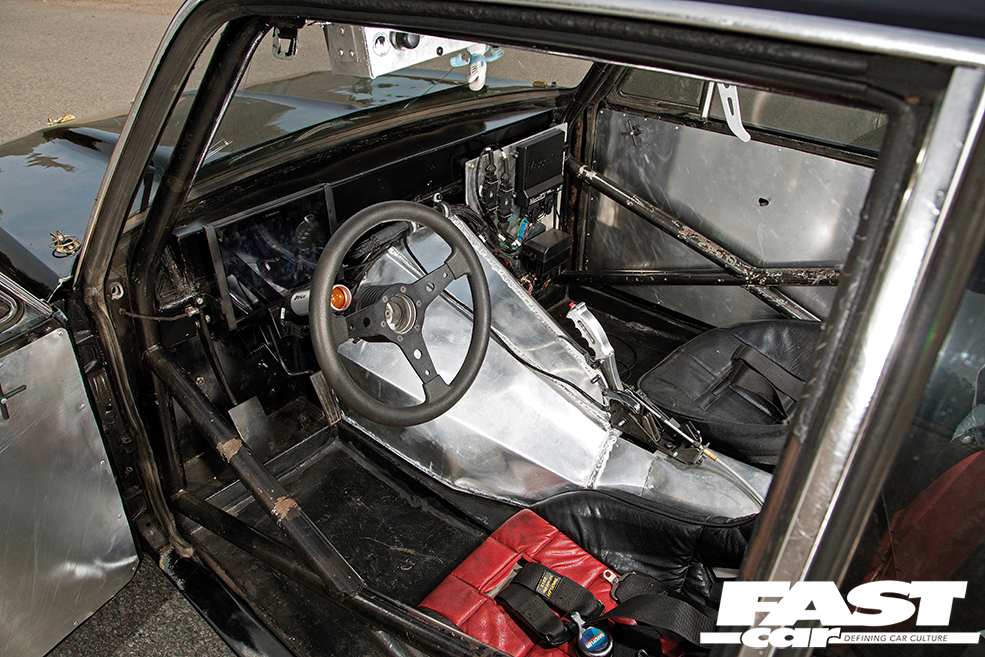 This is not a build for BM purists that much is obvious, but we don’t care who you are, 700whp in a BMW 2002 drag car sounds like a lot of fun. There’s not a person alive who wouldn’t get a bit excited by that, regardless of how against non-BM engine swaps they might be. Of course, Jonas doesn’t care about any of that and he loves it. “I think the engine package is my favourite part of the whole build, it’s a very big inline-six engine, and I love the sound of it,” he grins. But he’s not finished building it just yet. “Right now I am building a new engine and preparing it for Street Week here in Sweden,” says Jonas. Once that Barra is finished and hits 1200hp, this BMW 2002 drag car will turn into the final boss of unconventional engine-swapped BMs, and it’s going to be even more awesome than it already is.