It’s a sports car with a heart unlike any other. Here’s five of the best modified Mazda RX-7 builds from our archives.

Before we get into the thick of it, feel free to check out our ultimate guide to every generation of the Mazda RX-7, if you feel you need a bit more context. 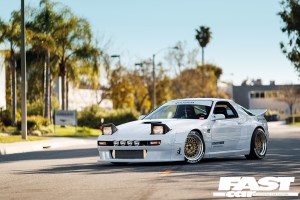 Designed to be a SEMA showstopper, this modified Mazda RX-7 FC is the creation of renowned aftermarket specialist, GReddy, commissioned by a man named Kei Miura.

Miura’s initial plan was to take the Pandem-kitted car back to Japan with him from America, but later decided to simply commission a second build for the Tokyo Auto Salon instead. Oh, to have that sort of money…

Anyway, that means that this Sublime FC remains stateside with the group of people that put the hard work into building it. Alongside GReddy’s core team members, some Mazda marque specialists were also enlisted to make sure that the FC’s unusual rotary powertrain was handled with care.

With the core internals and wiring restored to a top level, GReddy then set about making upgrades. A turbocharger was added, as was a new intercooler, exhaust, and fueling system. The ECU also had to be fettled to make sure that every component could work together in harmony. The end result was a peak power figure of 356hp – an 159hp increase over standard! These days that might not sound like huge numbers, but bear in mind that this thing weighs little more than a tonne…

To go along with the brawn under the bonnet, the car also has a brilliant Pandem widebody kit, finished in the same shade of white that this FC rolled off the Mazda production line in. The ducktail rear wing and retro TRA Kyoto 6666 alloys complete the stance.

Check out the full feature here, or head over to our Mazda RX-7 FC buying guide if you fancy having a go yourself! 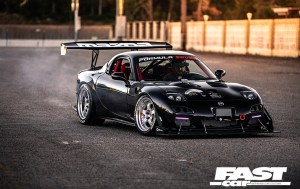 Sometimes you see a power figure attached to a car and just think, “do you really need all that, mate?”. This is one of those occasions. Well, the owner of this wildly modified Mazda RX-7 FD – David Mazzei – does compete with it at serious time attack events. So, we’ll let him off.

It’s hard to know where exactly to start with a build as impressive as this one, but the headline is probably the car’s 4-rotor engine. As standard, RX-7s came out the factory with just two, however by doubling the number of rotors involved, you get twice the engine capacity and twice the airflow. Both of which are great things if you’re looking for more power. In this case, the end result – when combined with a massive turbo – is more than 1000hp at 20psi of boost. It’s not been dyno-tested beyond that, but the maths indicates that 1500hp wouldn’t be out of this car’s reach.

It’s fair to say though that this build was anything but straightforward. Before the current set-up, David had attempted to make a different quad-rotor engine work but it just… didn’t. Oil starvation, rubbish exhaust note, and imbalanced rotors were just some of the things he had to contend with – some of which, obviously more important than others.

What’s a project car without its ups and downs though, hey? And besides, that learning process was all worth it in the end for the car that David’s ended up with.

Get the full low-down on all the ins and outs of this FD by checking out the full feature. We’ve got a buying guide for this model too, in case you’re planning on scratching that rotary itch… 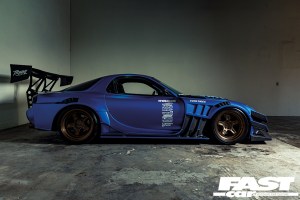 “I’ve always liked to do things differently,” says Jonny Grunewald. It’s easy to see then, where his attraction to the RX-7 stems from.

After a visit to the Tokyo Auto Salon, his ambitions were set in stone. For this project, Jonny would use only the highest-quality, or rarest, aftermarket parts to create his dream modified Mazda RX-7.

“I wanted to build it in a way that would make even Japan’s top tuners proud.”

The first thing you notice about this FD is the way it looks. The rare TCP-Magic bodykit supplies the car with stacks of aggression, but rather than coming across as obnoxious, the whole image takes on a very purposeful feel. That’s helped by the fitment of its 18-inch Volk Racing VR21C wheels, which won’t impress stance kids, but instead suggest an emphasis on drivability.

Then there’s the internals. We winced when we heard that Jonny was on his fourth engine, but that’s the risk you take when sticking to the rotary way of life. When things are working as they should, however, this FD’s powertrain is really something to behold. Thanks to some clever porting, it’ll rev all the way up to 10,000rpm, and thanks to a number of other mods (turbo, exhaust, cooling – the works), you’ll find around 700hp at the disposal of your right foot.

True to his original plan, practically no part of the car has been left untouched. The transmission, for instance, has been reworked in order to cope with the strain of the beefed-up engine. Meanwhile, the brakes are a bespoke Brembo-sourced system, designed specifically for this build!

You truly won’t want to miss out on all the details of this stellar creation, so click here to read the full feature. Or, if you fancy hearing our thoughts on what a regular FD RX-7 is like to drive, you can find our review of it here. 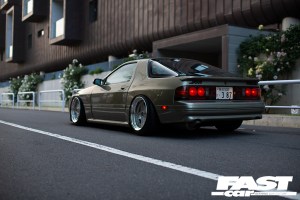 Designed to be the ultimate blend of show car, track weapon, and daily driver, Kohei set himself quite the task. It’s not easy to create a car that can competently tick so many boxes, but with the help of Yokohama-based tuning house N-Stage, he reckons he’s managed it.

The key was making sure that every adventurous modification was balanced out by a mod to improve functionality. Take the car’s stance: in order to achieve that slammed look, the wheel arches had to be reconstructed to avoid tyre rubbing at full lock.

The stock engine also got a full tear down and overhaul, and during the process an aftermarket turbo and fueling system were plumbed in. At the same time, N-Stage also came up with a completely bespoke cooling set-up. Apexi-sourced mapping was also installed to replace the old eighties electronics, arming the car with a reliable 350hp and 253lb ft of torque.

Aesthetically speaking, there’s no widebody in sight. Instead, a mixture of rare aftermarket and imported USDM parts make up the car’s outward appearance. The 17-inch AutoStrada Modena five-spokes it sits on are the perfect icing for this FC cake. Oh, and if you think that body colour looks familiar, you might recognize it as Millenium Jade – the shade that Nissan used on the Nur versions of the R34 Skyline.

On the inside meanwhile, once again, there’s an element of balance. The half roll cage gives the car the sort of rigidity and safety you’d want when driving aggressively, however plush seats lifted from the JDM Efini RX-7 model ensure no loss in comfort.

Take a closer look at this FC all-rounder by viewing the full feature here. 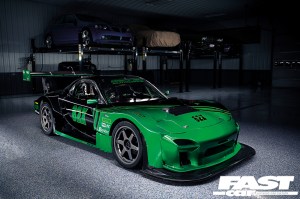 After a serious accident destroyed his previous RX-7 and left him hospitalized, you could’ve forgiven Logan Carswell for not wanting anything else to do with these cars. However, it’s worth pointing out that Logan is the boss of US rotary specialists Defined Autoworks, so his passion runs deep.

Instead, after five months or so of wheelchair-based recovery, Logan’s mind was full of ideas about how to build a better RX-7 than ever before.

“I’d been playing a lot of Gran Turismo 4 (well, that dates this story rather well) while I was resting up and the RX-7 in the game inspired my plan for my ultimate RX-7,” Logan explained. “It didn’t happen right away, and was a slow process, but that plan and the level of specification that I had in my head is identical to how the car has turned out today.”

Starting off with nothing more than a $2000 rolling chassis, Logan has transformed this FD into a Japanese GT300-inspired track car. The exterior speaks for itself, and actually required some chassis modifications in order to fit properly! The car’s track had to be extended, as did its driveshafts and suspension control arms.

The suspension itself also had to be switched out, with Logan opting for a Penske set-up, and anti-roll bars straight from a Daytona prototype. That’s not the only motorsport-derived component of this FD either. Its brake calipers are off a genuine NASCAR!

The car’s party piece, however, has to be its engine. Logan is running a quad-rotor power unit in this beast, good enough for 700hp. Apparently its 11,000rpm redline provides the closest sound you can get to Mazda’s legendary 787B Le Mans racer. Read the full piece on this monstrous build here.

Looking for more Mazda content? Take a look at our RX-7 trivia feature here. Oh, and if you think you’ve got a modified Mazda RX-7 that’s worthy of a place on this list, feel free to get in touch!