Bentley turned 100 in 2019 and among the celebrations the automaker has planned is the presentation of the EXP 100 GT concept.

The concept, revealed on Wednesday, signals Bentley’s intentions for the next 30 years of grand touring, both technologically and in terms of design. Chief among the new technologies are zero emissions and self-driving capability. Don’t worry, future Bentleys will still let you do the driving, should you desire.

The powertrain is a battery-electric setup that Bentley said will deliver a range of 435 miles on a single charge and enough oomph to accelerate the vehicle from 0-60 mph in less than 2.5 seconds and see it reach a top speed of 186 mph. Bentley said the battery is a next-generation design with five times the density of current automotive-grade batteries. It’s why the EXP 100 GT only weighs 4,188 pounds, which isn’t bad for a battery-electric car that stretches 19 feet in length.

Fully self-driving capability is there, should the driver want to sick back and relax. A digital assistant is present and can provide information along the journey, such as points of interest and route suggestions. Communicating with the digital assistant can be done via voice or through hand gestures, with some of the gestures read by crystal glass elements in the dash and rear center console.

When the car is in self-driving mode, AI systems that can detect your mood can adjust the cabin ambience to suit, for example dimming the lights and making the ride more supple when you are stressed. There are four pre-set modes (Enhance, Cacoon, Capture and Re-Live) plus a custom setting. The Capture mode records experiences from your grand touring trip and then Re-Live replays the highlights via in-car displays.

Sustainability of the materials has also played a big part in the development of the EXP 100 GT. For example, the exterior paint is said to have been derived from recycled rice husks, and the leather-like trim material is a byproduct of the wine industry. Bentley has even developed a unique fragrance for the car by working with sustainability-aware fragrance company 12.29. The fragrance is said to have hints of sandalwood and moss. 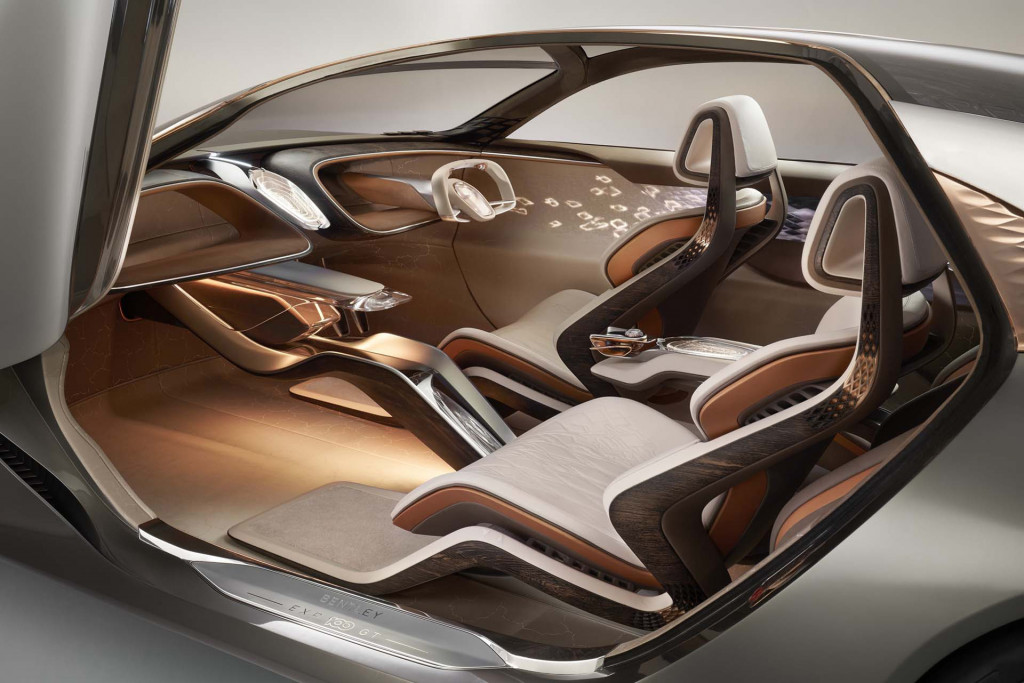 While you shouldn’t expect to see a vehicle like the EXP 100 GT in Bentley’s showrooms anytime soon, some of the design elements are likely to appear on next-generation Bentleys. The same is true for the technology. In fact, the automaker has even hinted at an EV with 400 miles of range being launched around the middle of the next decade.

Bentley has much more in store for its centennial year. The brand has already revealed a special Mulsanne limited to 100 units, each featuring a slice of the original crankshaft that featured in the 1930 8 Litre owned by company founder Walter Owen (W.O.) Bentley.

Furthermore, every Bentley built this year can be fitted with special touches to mark the milestone. And don’t forget the massive 66-pound tome highlighting Bentley’s history through photos. But wait, there’s more. Bentley also revealed a new generation of the Flying Spur and committed to a fully electrified lineup.