Stacked with influences and packed into the perfect blend, this bagged Focus RS Mk2 raises the stakes.

Standing out from a crowd is a hard trick to pull off in the car world. It takes a certain amount of creativity, knowledge, time and money to create something different, but the end result can be pretty special.

Ash Mander’s unique bagged Focus RS Mk2 firmly falls into that category, as his low and wide Mk2 mixes motorsport style with a show-car look and finish, inside and out. Thanks to a WRC kit, air ride, engine mods, roll cage and custom touches, it’s unlike any other Focus. 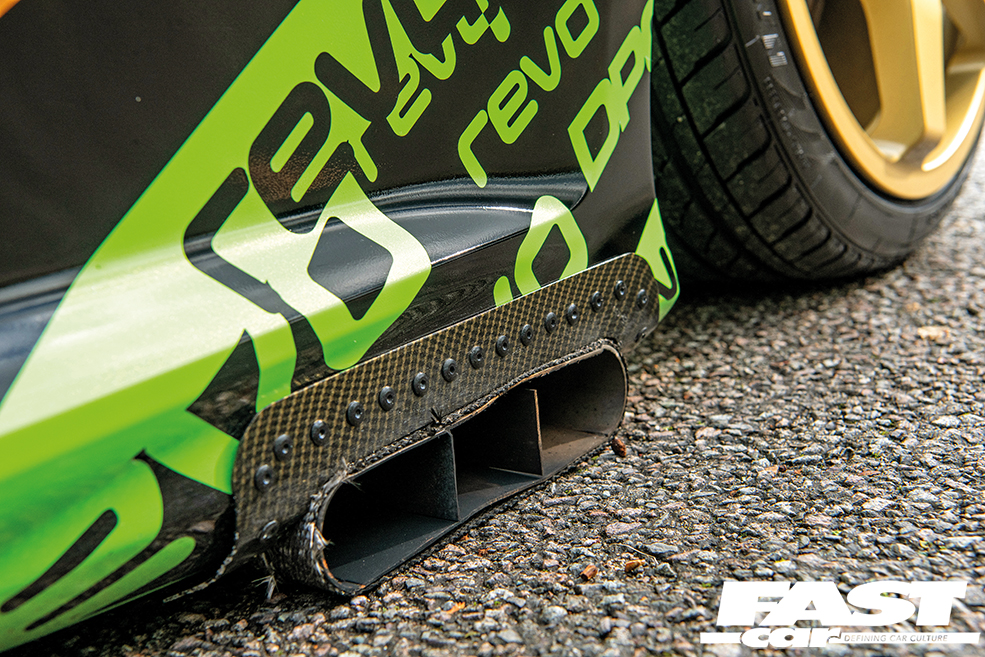 The build has taken three years so far, but it took Ash far longer to find his favourite Blue Oval, as he explains: “I’ve had many Fords over the years. I started with a Mk2 Fiesta but then had four Mk4 Escort RS Turbos, including one with an Illusion kit, a Fiesta XR2i, Escort Cosworth, three-door Cosworth, Focus ST and Mk1 Focus RS.”

But despite having owned a huge number of fast Fords, it’s the Mk2 Focus RS, particularly in Ultimate Green, that he’s fondest of, as it ticks every box for him.

He explains, “First of all, it’s the look; they just look mean. Then the colour is just in-your-face, plus there’s the sound of that five-pot that’s just unlike any other.” 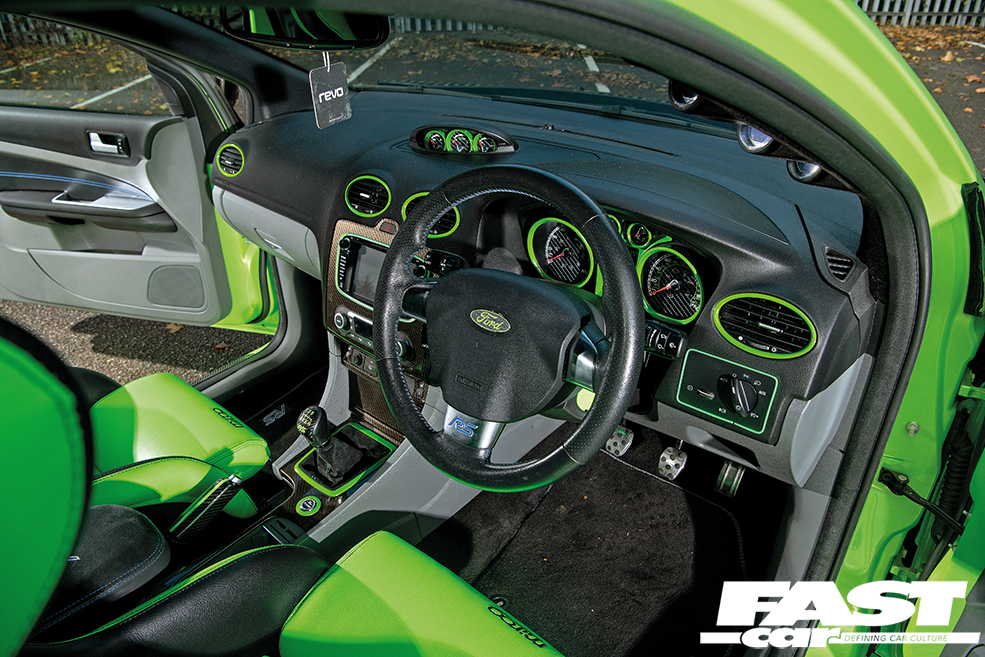 Safe to say, Ash is a big fan of a Focus RS Mk2, so when he came across this example for sale on a Facebook group he snapped it up. The car was already fitted with some basic engine modifications and K-Sport front brakes, but other than that it was standard and ripe for Ash to put his own mark on it.

He chuckles, “I didn’t mean to go this far but things just got a bit out of hand. I started off wanting a few little mods to be different from others around, so fitted a set of wheels (that at the time no one had), added a few carbon parts and a gloss black wrap on the roof, along with a roof scoop.” 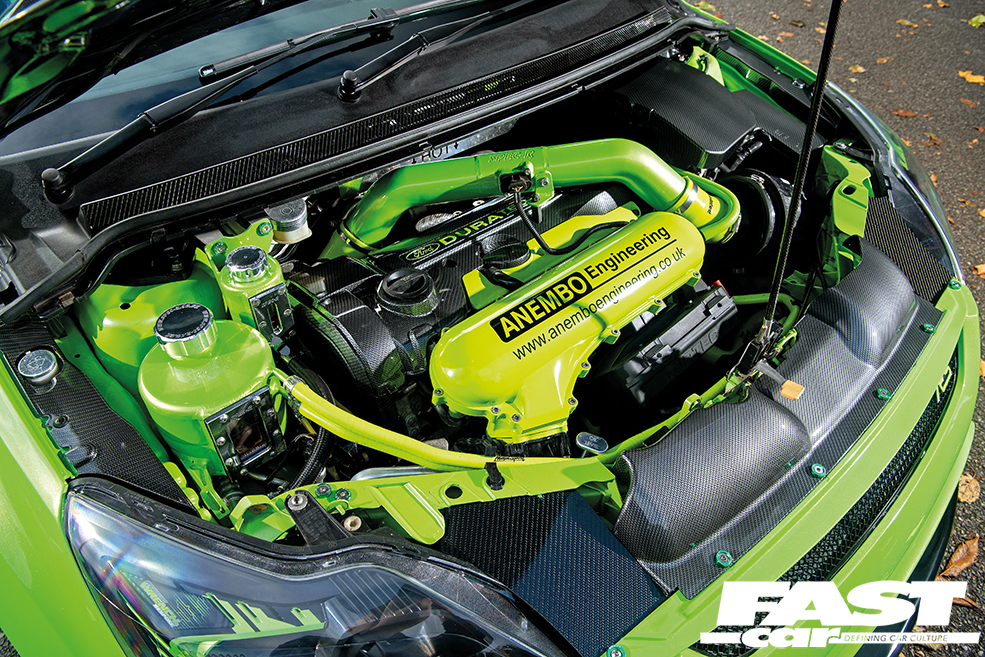 But after attending a few shows, Ash found the car quickly blended in with the rest, and soon decided further action was required. Having always liked the super-low air-ride look, but also a fan of the motorsport-derived rally style, Ash boldly decided to do what no one else had done before and blend the two together. With a clear idea of what he wanted, he jumped straight in and fitted an Air Lift kit with the help of a couple of friends.

“We did it all in a mate’s garage,” he recalls. “At the time, I just made the boot build very basic to get me by, and soon after I added the big WRC spoiler, which I got dipped in carbon by Rukus Customs to be a little different. Although I loved the original look, the rally style added to the lines of the car.” 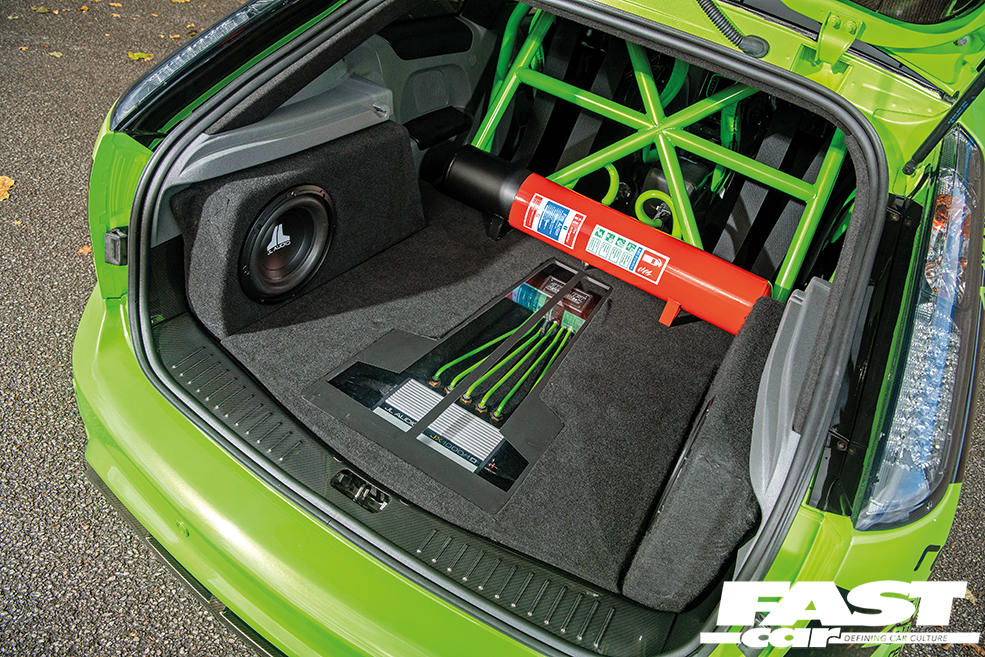 The build was starting to take shape, but keen to push the look further, Ash got his hands on a full WRC-style kit, consisting of the wild front and rear bumpers, as well as matching front wings, which were professionally fitted by TJ’s Paintworks. And while it was there, Ash decided to go the whole hog and had the entire car repainted, before fitting a carbon fibre bonnet.

Other special touches include a custom side-exit rally-style exhaust, which Ash designed himself, although that left the problem of two holes in the rear diffuser, so it was tweaked and fitted with an F1-style brake light, before being dipped in carbon. 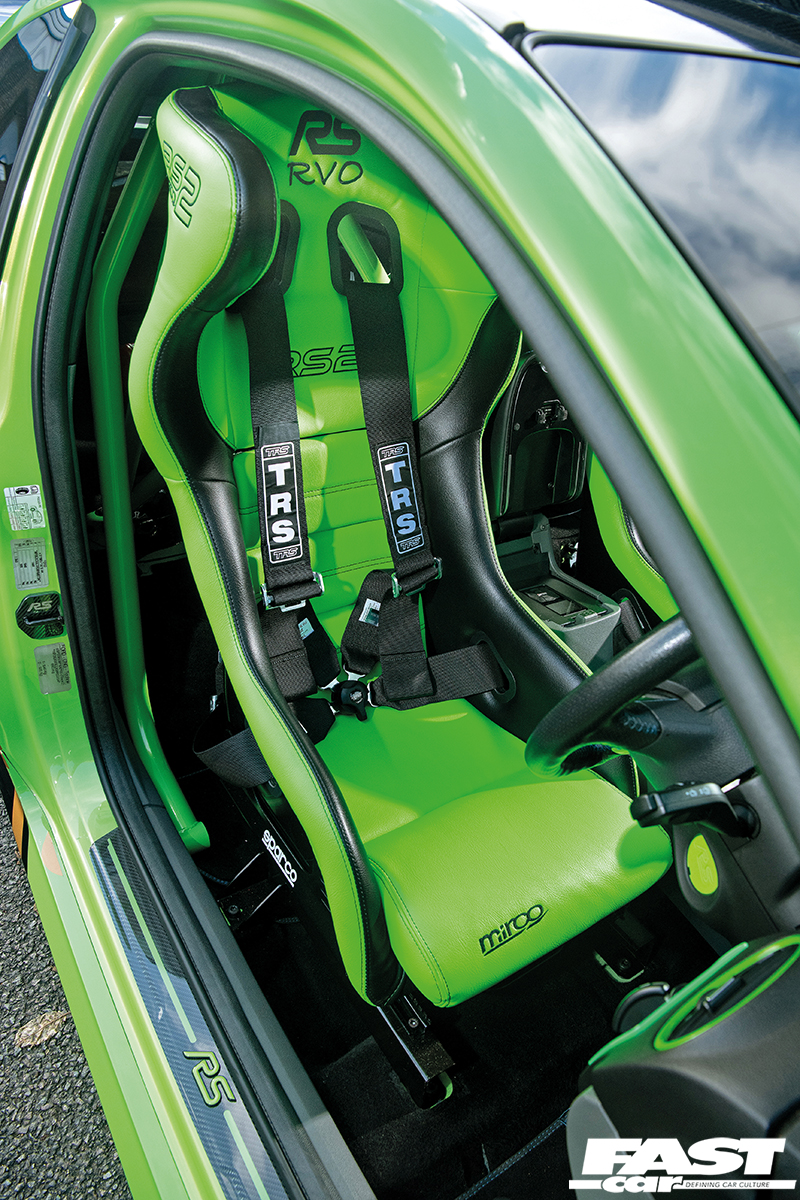 He says, “Then I was happy with the outside: for the time being. So I started on the inside and continued with the mix of influences and theme of black and green, adding an Auto Specialists Clubsport roll cage that was painted to match the outside.”

A pair of custom Mirco RS2 bucket seats were soon added, the head unit was changed, and the centre console was dipped, with other parts like the handbrake and gearknob replaced with real carbon.

Ash says, “I then moved onto the boot build, which I designed. It took me about a week to do, as I sound-deadened everything. Originally, I didn’t want to remove the rear seats but with the cage and the idea I had for the boot build, it all went a little crazy.”

At that point, he had fitted a set of 20in BBS wheels in gold, and although he thought he was done with the exterior, he soon found himself thinking it still didn’t stand out enough. A change came with motorsport-look Rotiform Six wheels in gold, which Ash tells us no one else seems to have on a Mk2 RS just yet.

He recalls, “That just left the engine bay, which was the only thing letting the car down. So I changed the header tank, crossover and power steering tank to Spec-R, and fitted an Anembo plenum and engine cover. I also changed all of the water and boost hoses to green, and all of the plastics were dipped in carbon-effect.” 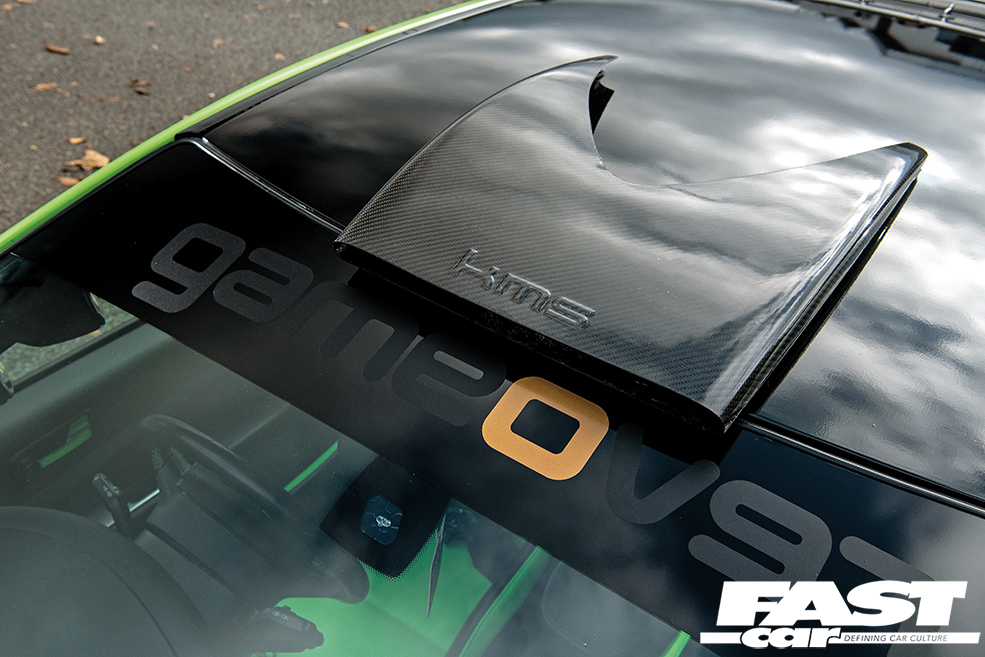 Other engine modifications that aren’t so obvious are the Syvecs ECU conversion and bigger injectors to make around 450bhp, as well as an uprated clutch to take the power, which complete the overall package.

It’s fair to say Ash has put together a Focus like no other and the end result is not only a car that attracts attention and stands out from a crowd, it also looks and drives better.

He confirms, “I like all of it. I would argue it’s better now, especially with the air-ride, as it handles so much better than the springs it was on. 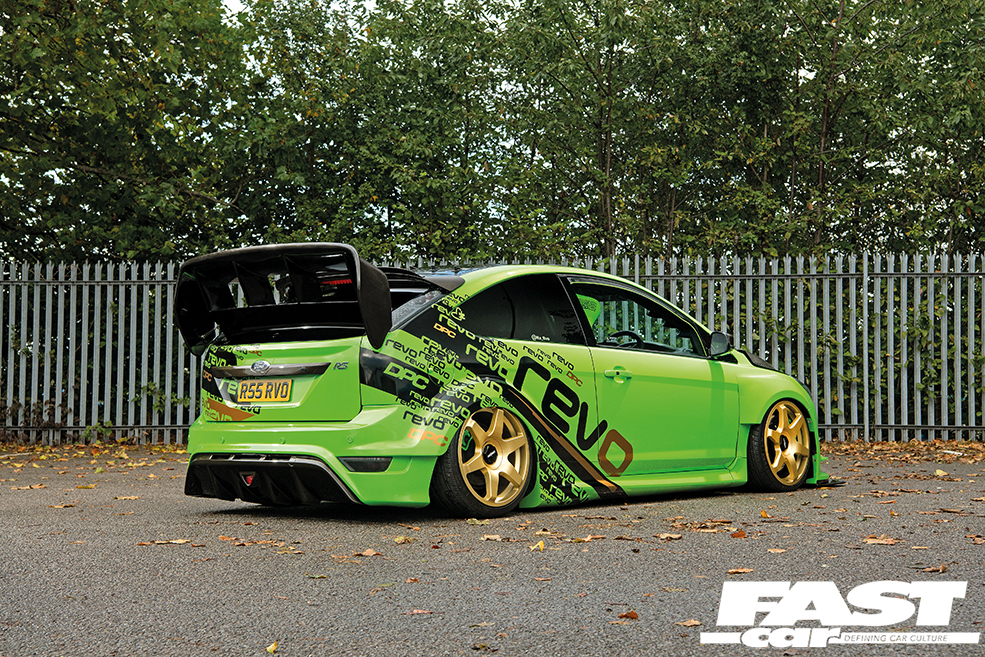 “I mainly take it to shows or the odd meet rather than daily, which I didn’t intend on, but with the fact that you can’t park these cars anywhere, it’s just one of those things.”

Despite the huge amount of modifications that appear to tick every box, Ash tells us the build isn’t quite finished yet, and there are still plans for the future.

“It’s ongoing and there are still things I’ve got in my head to do. For a start, I’ve got matching K-Sport rear brakes to go on, and I’m going to restore all of the underneath and then poly bush everything.”

Creating a complete build and standing out from the rest is never easy and, as Ash proves, it never stops. 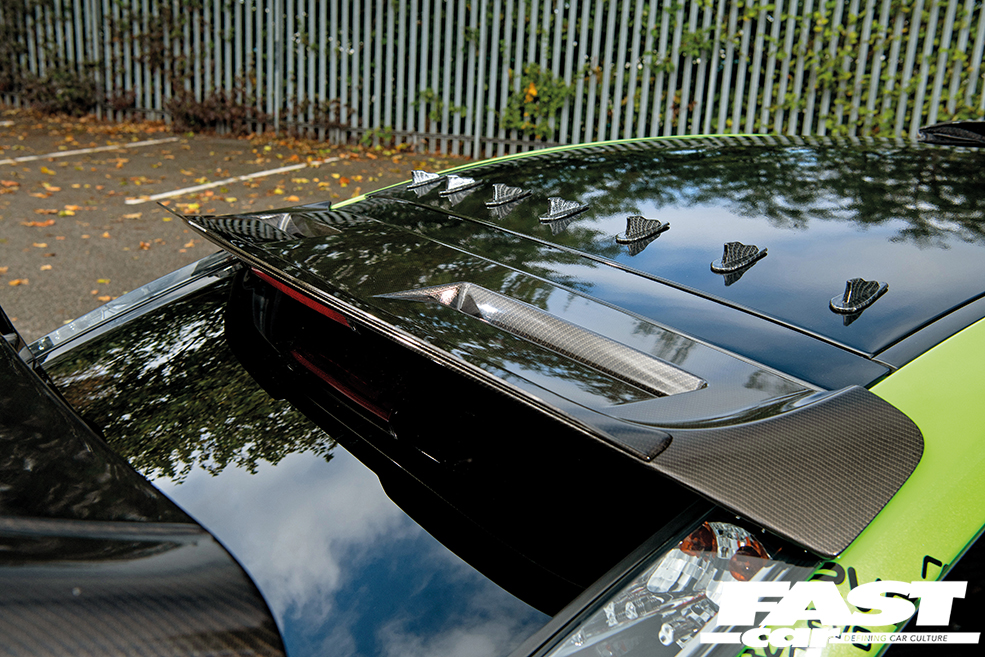