Two cars. Eight driven wheels. Over 1000bhp. Each of these fabulous AWD Focus ST builds are 500bhp, driveway-DIY creations that sets the bar for homebuilt heroes.

We’re always amazed by what people manage to build at home in their garages and on their driveways. We’ve seen all kinds of creations over the years, and just when we think we’ve seen it all, something new comes along that leaves us blown away.

These two cars are the latest in the line of jaw-droppers – owners Sam Harrington and Sean O’Connell have created these heavily-modified Focus ST builds, each putting out over 500bhp, and each fitted with all-wheel drive running gear to make the most of it.

But while they share the same technical upgrades, one is a show-ready road car and the other is a stripped-back track weapon. 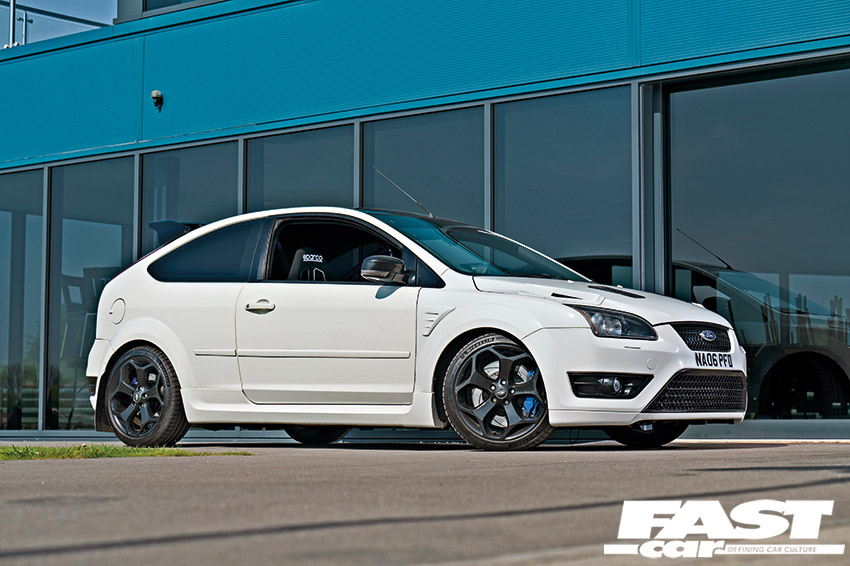 Sam is the owner of the white AWD Focus ST, and his is the car most likely to be found on track. His AWD Focus ST is stripped for weight reduction and features a more potent engine build and larger turbo than Sean’s car, but he has had longer to develop it, as he bought the car as bare shell nearly four years ago.

Sam explains, “I found it online for £500 but it had no interior, engine or wheels. Originally I was just planning on keeping the engine stock and running an RS turbo, but that plan didn’t last long.”

This is the second Ford Sam has owned, after his previous Mk6 Fiesta Zetec S, but the years of development on the driveway have seen it transform from a shell into a hugely capable track car, thanks largely to a rare and revolutionary all-wheel-drive conversion.

Sam says, “Sean and I were talking about the all-wheel-drive Volvo V50 being based on the same platform as the Mk2 Focus, so we both thought it must be possible.” 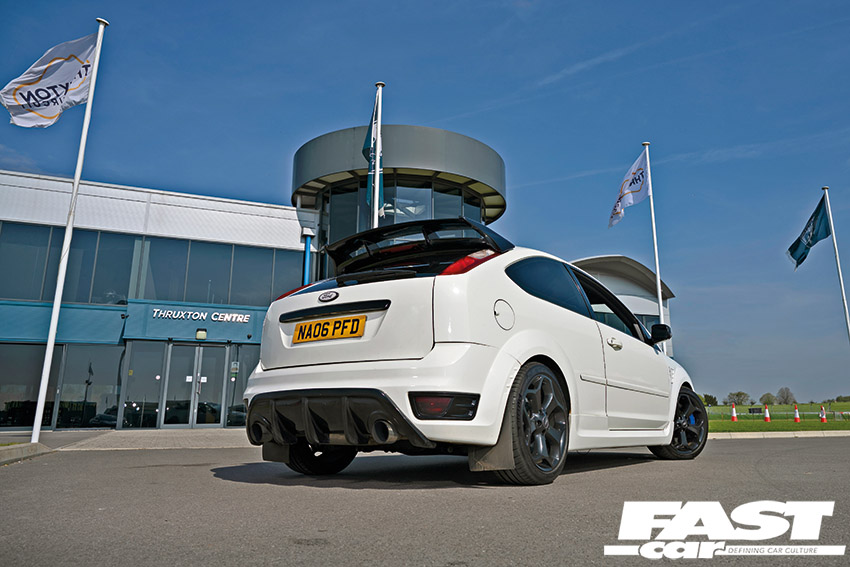 Sure enough, it was possible. And after plenty of research, the result is a combination of Volvo V50, S60R and Ford Kuga running gear, all managed by a custom Haldex controller usually suited to all-wheel drive VW/Audi setups. It interacts with the ECU for torque–split adjustments, further helped by Quaife LSDs front and back to improve mechanical traction.

“It makes an unbelievable difference to the raw performance and overall drive of the car, giving the maximum grip on track,” Sam confirms. “The setup is also extremely good at launching from standstill. I’ve done back-to-back testing in FWD and AWD modes, and the quarter-mile drops from 12.6 to 11.2 seconds, while 0-to-60mph goes from 5.0 seconds to 3.1 seconds.”

It does help that Sam’s engine build features forged pistons, steel rods, Stage 2 camshafts and a Garret G30-660 turbo on a custom sidewinder manifold to see an estimated 540bhp on the current fuel system. It’s impressive for a true home build that delivers a thrilling driving experience. 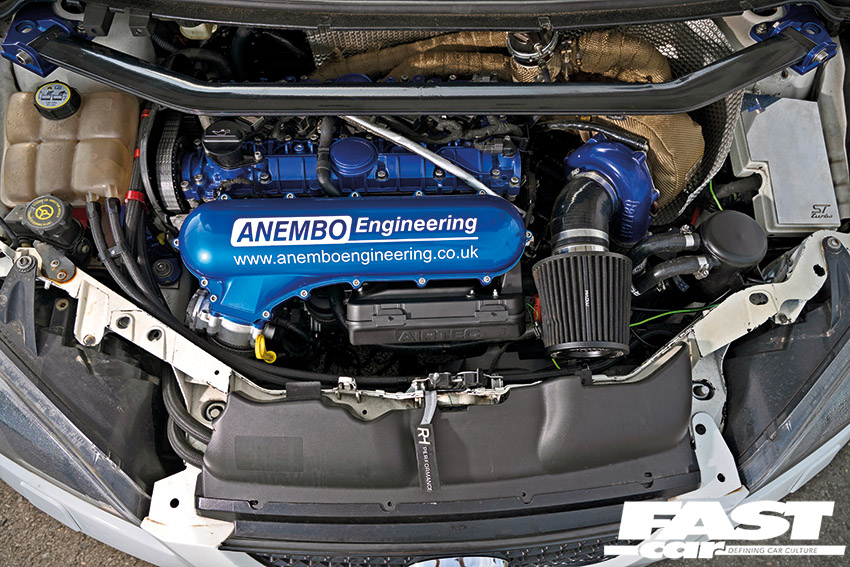 “The engine was built inside the garage at home and then the whole car was put together on the driveway. To drive, it’s a little loud due to the lack of sound insulation and carpets, but at full throttle, revving to over 8000rpm and flat shifting brings an unbeatable sound,” Sam says.

To match the performance, the car features a purposeful look that is largely to help it function under track conditions, which is why there is plenty of ventilation.

Sam explains, “I’m mostly going for an OEM-plus look on the outside with a larger front grille made out of two originals. The bonnet vents are more about cooling the huge amount of heat the sidewinder manifold and turbo produce.” 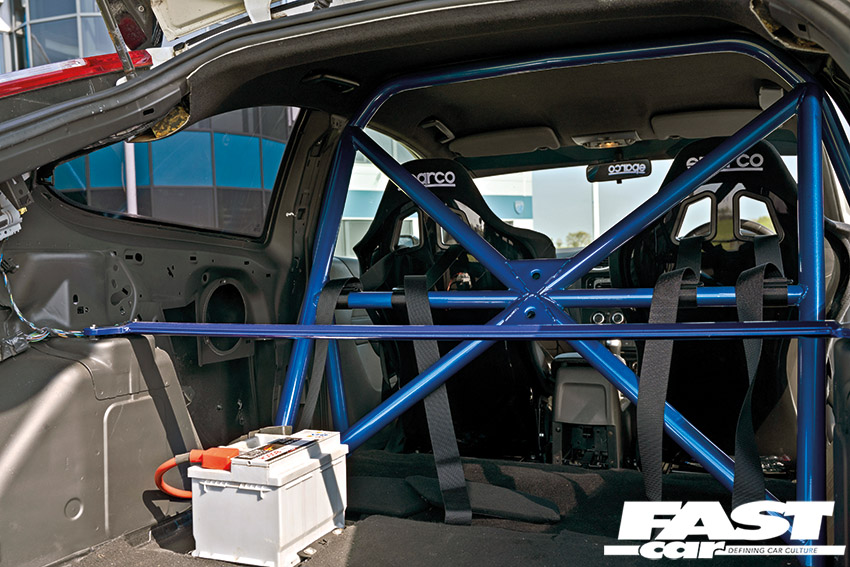 The same function-over-form idea can be found inside, where Sam has chosen to fit a roll cage and bucket seats. With plans for lightweight wheels, polycarbonate windows and an upgraded fuel setup to allow him to open the taps on the turbo and bring power to around the 600bhp mark, there’s more to come soon. 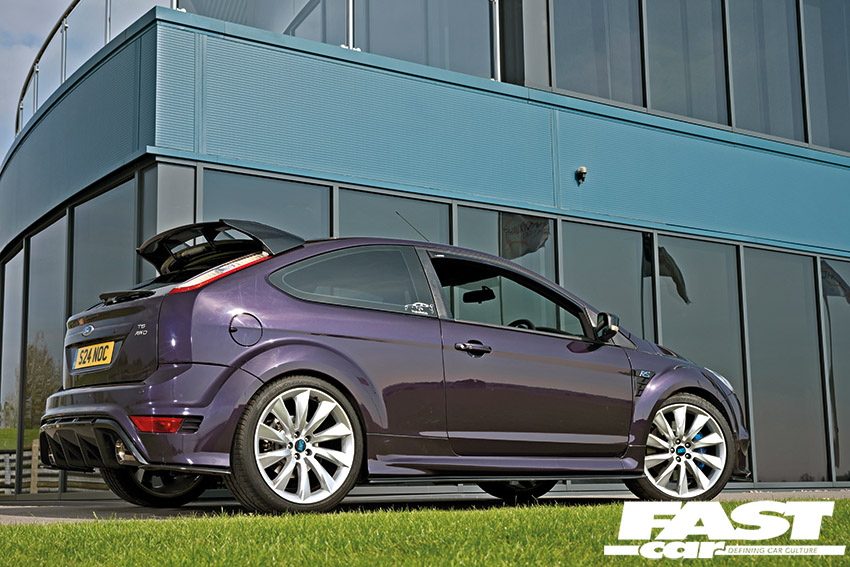 While Sam’s Focus is a dedicated track weapon, Sean’s purple ST is a lesson in creating a well-finished road car that ticks all the boxes. His journey with this car began two years ago, although he already had experience with fast Fords, as he explains: “I had a modified Fiesta Zetec S when I was 17 and that’s what got me into the Ford scene. I then owned the original Focus ST500 press car, which I converted to AWD and was putting out around 370bhp.”

It was having built the ST500 that made Sean want to do another bigger and better version with more power and improved looks, so this time he chose to start from scratch.

Sean says, “I found the car online being broken for parts, as half of the engine was in the boot and it was partly stripped. I asked if I could buy the whole car, and a few hours later I was trailering it home. 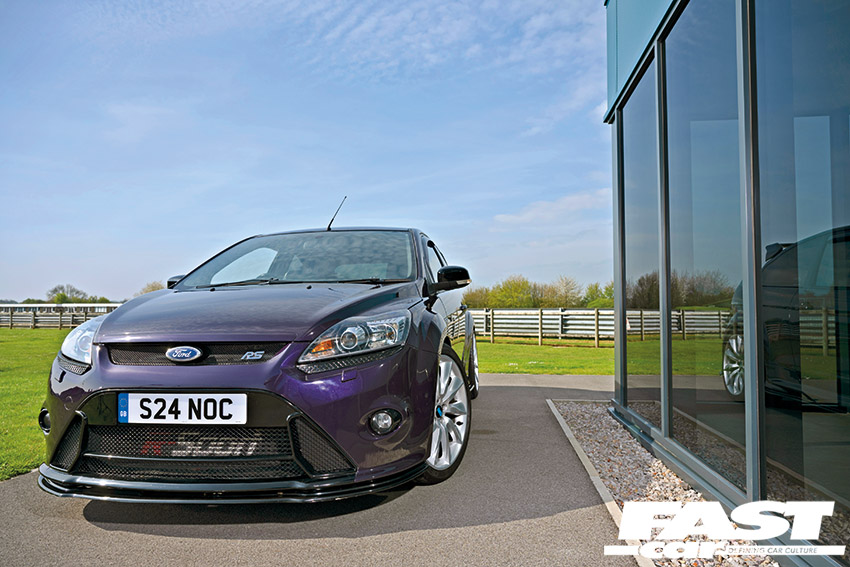 Wasting no time in building his vision, Sean’s first purchase was a used engine with forged pistons and steel rods. Fitted in place with a cast exhaust manifold and a cheap eBay GT35 turbo, Sean was able to check for any clearance issues with the Volvo transfer box – although he soon ran into a couple of issues that would hamper progress and force him in another direction.

First of all, the used engine turned out to be a dud, so another had to be built. And then came the bodywork.

Sean reveals, “I didn’t intend to modify it to the level it’s at as the bodywork was actually really clean. Unfortunately, the bonnet came up in the wind and bent the corners and smashed the windscreen, so that’s where the RS conversion started. All I wanted to build was something different.”

On the inside it’s a similar story, as Sean previously had Mk2 Focus RS seats fitted. And although he loved the way they looked, he hated how uncomfortable they were. 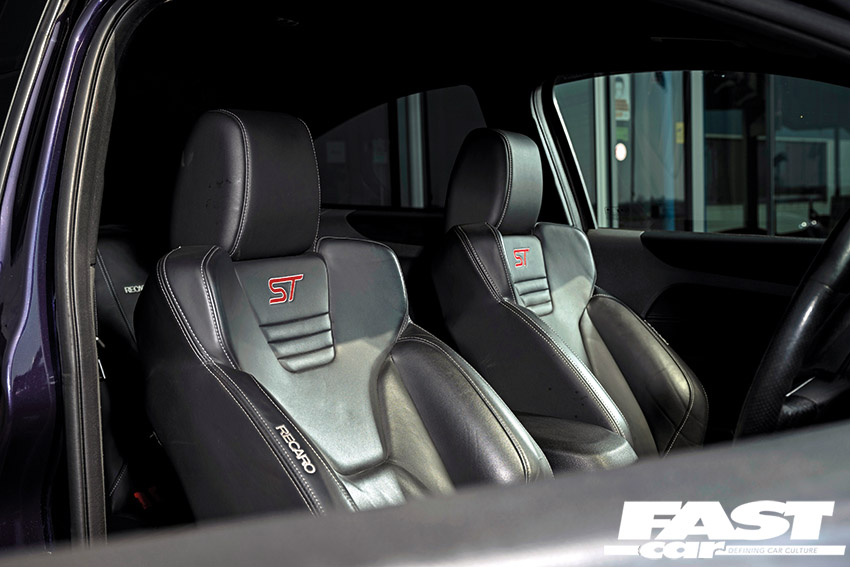 “As I’m getting older I enjoy my comforts, such as heated seats, so the Mk3 ST3 seats offered extra support and were heated,” he tells us.

Back on track with the build, next was the AWD conversion, which Sean explains is a labour-intensive task as the underside of the car has to be stripped down completely.

“There are also custom items like the fuel setup and propshaft, plus the exhaust needs making from scratch, so it’s no easy task building it on the floor in your back garden.”

As you might imagine, the result of an AWD Focus ST with over 500bhp is a hugely capable car, as Sean confirms.

“It’s absolutely insane to drive because the turbo isn’t massive, so the car is on full boost by 4000rpm, and the way it grips and goes is unreal. The all-wheel drive is mapped with the ECU directly to the Haldex controller, so you can set it up how you want it.” 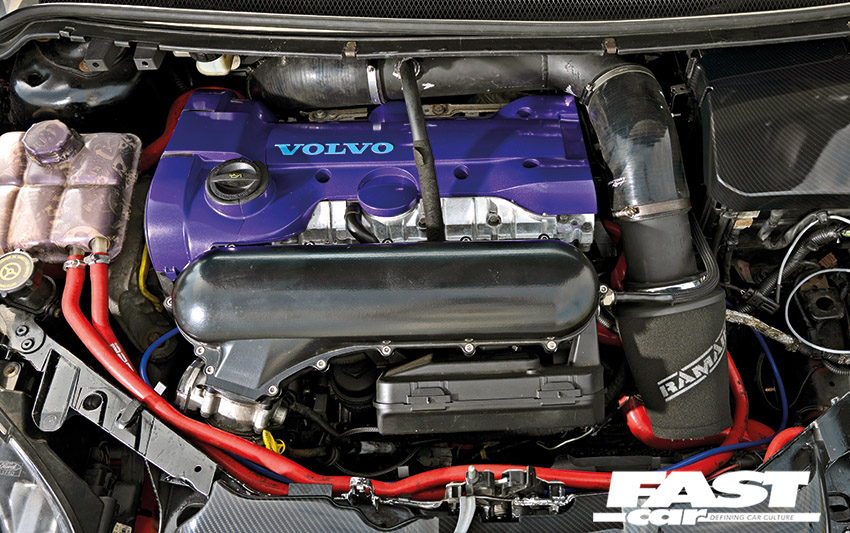 The car is mainly used as a weekend toy, but Sean does plan on doing some shows this year. And once he gets a different set of ‘more sensible’ wheels, he plans to venture out on track with it.

With both owners looking to do more, we can only imagine how these driveway builds will develop into the greatest of all home-built heroes. Gripping stuff indeed.