It’s been around for a quarter of a century, but the end of the road is now in sight for Audi’s entry-level sports car. As a final farewell, the German marque has built this, the Audi TT RS Iconic Edition.

Love it or hate it, the Audi TT has been a staple of the performance car scene for more than two decades now.

When the original Mk1 was first unveiled, we marveled at the way it looked. Distinct from other Audi models, its bubbly silhouette seemed like something straight out of a sci-fi movie, while its tail-happy nature earned it a rather notorious reputation soon after launch.

That was quickly rectified by a rear spoiler, and from then on, the TT became a valuable weapon in Audi Sport’s arsenal.

Some felt that later iterations perhaps lacked the ‘wow factor’ of the original car, but nevertheless, the TT continued to sell in impressive numbers for its market segment. Of course, it did have some image issues over the years though. Men with fragile masculinities have often brandished the TT as a mere ‘hairdresser’s car’, with little regard for the appeal of its performance.

Those remarks seem even sillier when confronted by an RS-spec TT, which is what the new Iconic Edition is based upon. 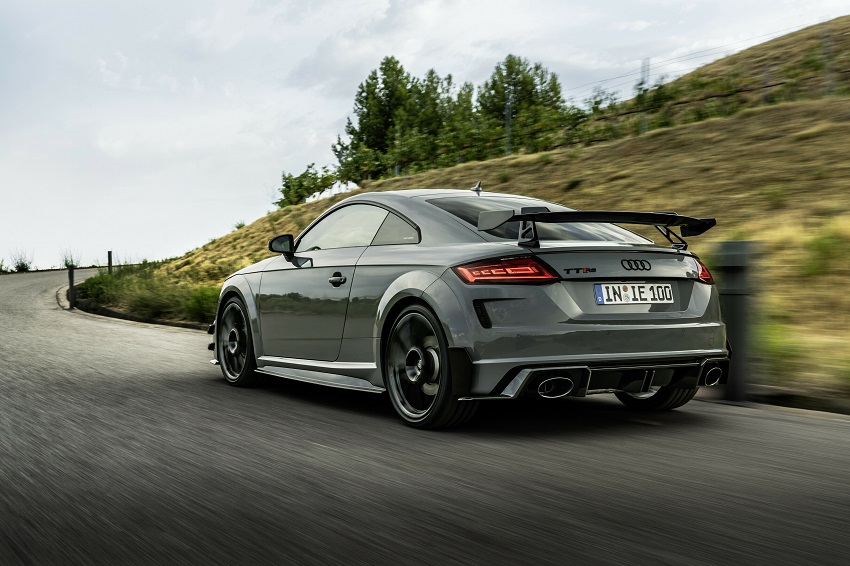 Mechanically speaking, this new special edition of the car is no different to a standard TT RS. That means it comes with the same soulful 2.5-litre turbocharged five-cylinder engine, good enough for 395hp and 354lb ft of torque.

The power is sent to each of the four wheels via Audi’s seven-speed DSG gearbox, which should be able to get you up to 62mph in just 3.7 seconds. The top speed, meanwhile, is 174mph.

Overall, the Audi TT RS Iconic Edition instead relies on its exterior to mark it out as something unique. In this guise, the TT gets a heavily reworked aerodynamic package, featuring all the splitters, canards, and diffusers that you could wish for. The new rear wing should add a handy bit of downforce into the mix too.

Only 100 will ever be built, and naturally that means these cars will sell for an eye-watering sum. The asking price currently stands at a whopping £87,650, and to put that into context, a regular TT RS starts at £60,025.

At that price, you’d have to absolutely love the Audi TT in order to buy its final chapter. But then again, what’s the right price to pay for a slice of history? We’ll let you decide…