It had been circulating the rumour mill for a while, but now it’s confirmed: Audi enters F1 in four years’ time.

The German marque has confirmed that from 2026, they’ll be taking part in the pinnacle of motorsport – the FIA Formula 1 World Championship.

So far, the exact details of Audi’s entry into the championship haven’t been fully revealed. What we do know for certain, however, is that they will be arriving with their own bespoke power unit, rather than operating as a customer team.

The engine – which Audi are keen to point out is the first German-built F1 engine in over a decade (a dig at Mercedes, perhaps?) – will be designed in accordance with the new engine regulations that come into force from 2026. The V6 architecture will remain in play, however there will be a greater emphasis on its electric component, known as the MGU-K.

In essence, we’ll be looking at a 1.6-litre block that can kick out more than 1000 horsepower, and F1 have even teased that the reworked engines may bring back more noise to the cars, which some fans felt had become a bit muted over the years.

As for where that engine will be placed, well that’s where things become a little less clear. Audi say that they will “announce a decision on which team they will be lining up with in 2026 by the end of this year”, which appears to close the door on an entirely new two-car operation.

Instead, whether the Four Rings’ involvement resembles that of a mere engine supplier, or whether they decide to take over an existing team (Alfa Romeo Sauber has been mooted as an option), we’ll just have to wait and see. 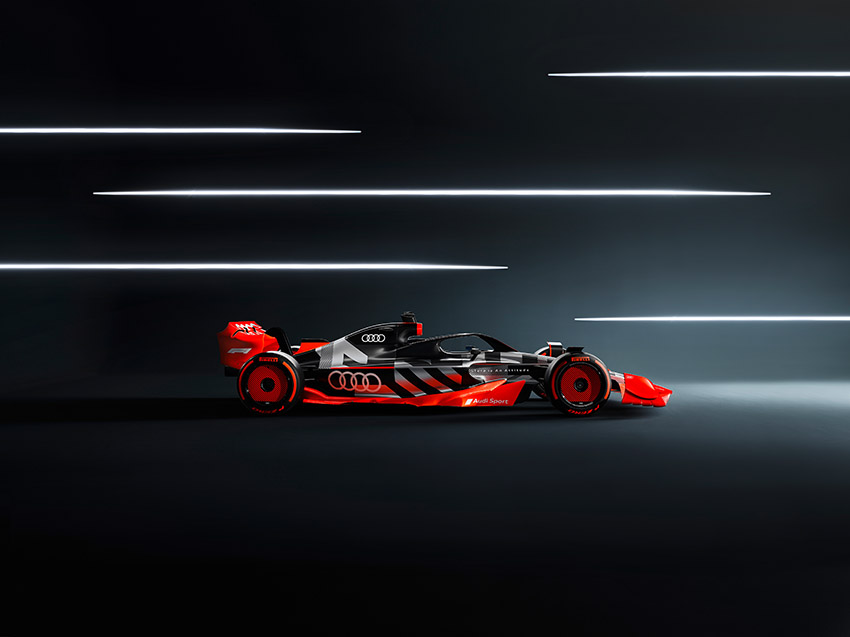 In the meantime, Audi have teased us all with a striking show car that will be on display this weekend at the Circuit de Spa-Francorchamps. Speaking ahead of this weekend’s Belgian Grand Prix, Audi’s Chairman of the Board of Management, Markus Duesmann, said, “Motorsport is an integral part of Audi’s DNA.

“Formula 1 is both a global stage for our brand and a highly challenging development laboratory. The combination of high performance and competition is always a driver of innovation and technology transfer in our industry. With the new rules, now is the right time for us to get involved. After all, Formula 1 and Audi both pursue clear sustainability goals.”

As he alludes to there, sustainability is a big part of the reason why Audi is entering F1. F1 itself has outlined a plan to cause far less damage to the planet than it currently does, by placing greater demand on electrification, and investing in ‘sustainable fuels’ as well. In fact, the championship’s organisers are ambitiously aiming for the F1 circus to be entirely carbon neutral by 2030.

From a marketing perspective, this is gold. Not only will Audi be able to take advantage of the sport’s growing global audience, they’ll also be able to align themselves with greener values: something which the new international influx of younger viewers holds dear.

The move makes plenty of sense then for Audi Sport, however the commitment of taking on an F1 program has had an impact upon the rest of their racing antics.

As things stand, Audi’s Dakar Rally program will remain, however development of a Le Mans LMDh hypercar has been canned. Their involvement in GT3 customer racing is also rumoured to be scaling down somewhat, following Team WRT’s announcement that they’ll be switching from Audi to a new allegiance with BMW.

As for what it means for F1? Well, with Audi’s level of budget and expertise, the championship could have a new player at the front of the grid…