Hiding beneath the subtle styling of Nick Simpson’s Mk2 Focus ST lies a brutal 770bhp on pump fuel and an insane 900bhp on E85 race fuel, making this one stealthy sleeper you don’t want to mess with…

Play dumb and no one will see you coming,” laughs Nick Simpson, the owner of the sweet yet subtly styled Mk2 Focus ST you see before you. “That was an expression my grandad used a lot, and it perfectly sums up the approach I’ve taken with the Focus.”

You see, Nick’s not someone who likes to shout his intentions. He’s more the type to speak quietly but carry a big stick, and his 900bhp Mk2 Focus ST has been built in this image.

Nick says, “I’ve always been a fan of the less-is-more approach to styling mods, as I prefer to mask the car’s true performance to keep it more of a sleeper.” 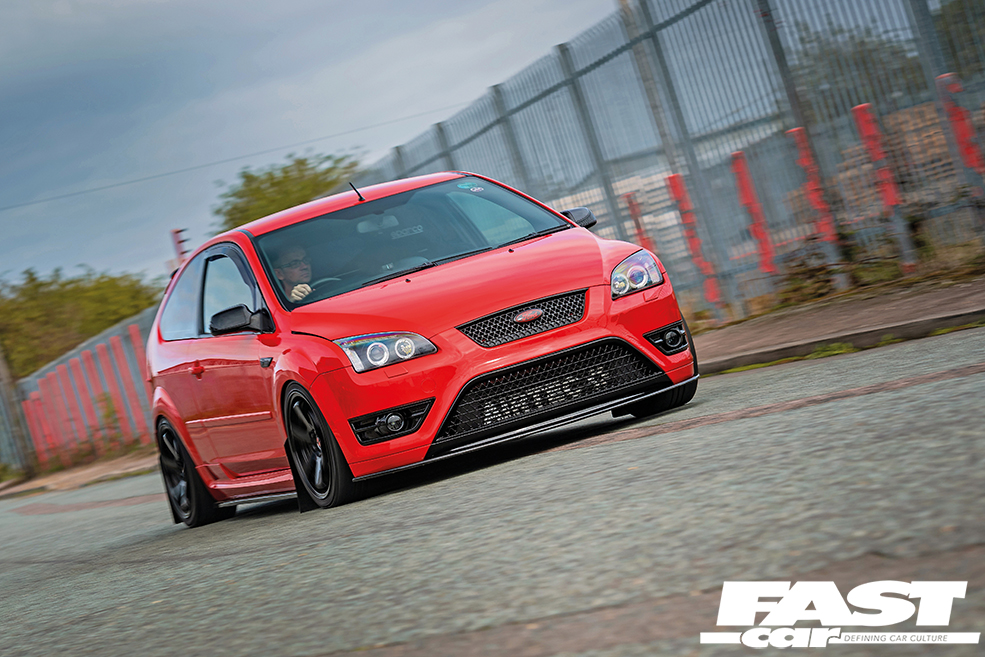 And for a man that counts a shouty Mercedes A45 AMG and McLaren MP4-12C in his back-catalogue of cars, that seems quite a strange statement.

“There’s no hiding in a supercar or brazen hot hatch like the A45, as everyone knows how fast they are, so they’re not surprised when it takes off like a scalded cat. But few people are prepared for the brutal performance of the ST. I love to see the look on their faces – they can’t believe it.”

Nick’s journey with his 900bhp Mk2 Focus ST started when he bought the car as a clean, standard example back in 2014.

He explains, “Even though I’ve always been a big Ford fan, this was only the second Ford I’d owned. The first was an Escort 1.3 Ghia that my grandad bought me as my first car after passing my test. 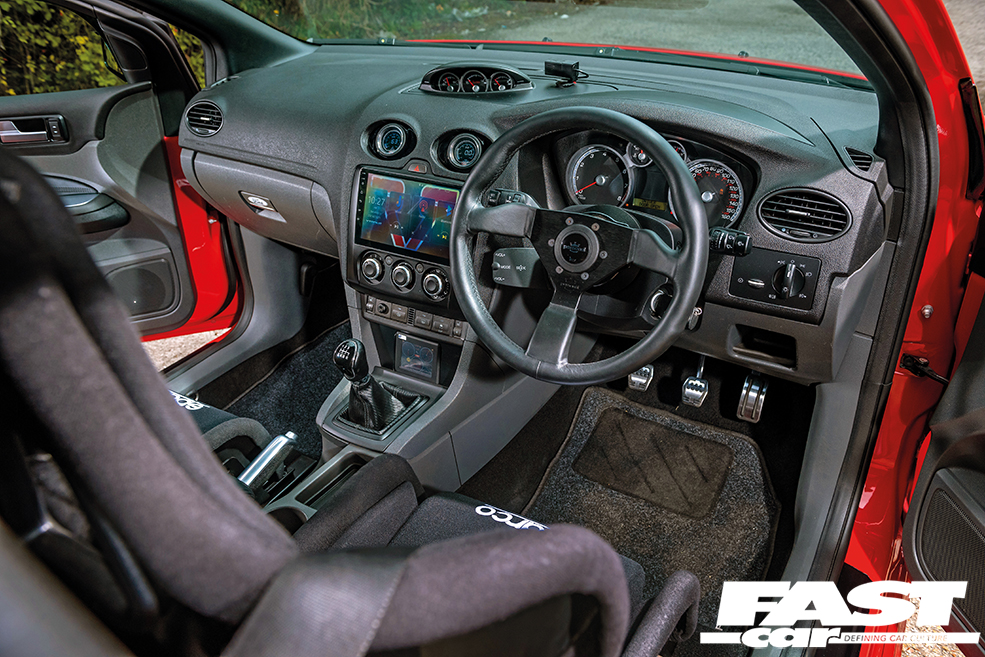 “Unfortunately, I ended up writing it off in an accident and it took me a long time to get back into Ford ownership.”

Nick’s grandad played a large part in his life, not only as a father figure but also as a guiding light in the realm of fast Fords. A huge Blue Oval fanatic, after he passed away, Nick promised to one day build a Ford that his grandad would be proud of.

Nick says, “It took me a long time to be able to face having a Ford again, so I focused on work and making a success of myself, which allowed me to enjoy some pretty special cars. But I knew the day would come that I’d be back in a Ford, and I would go to town on it and build it as a tribute to my grandad.” 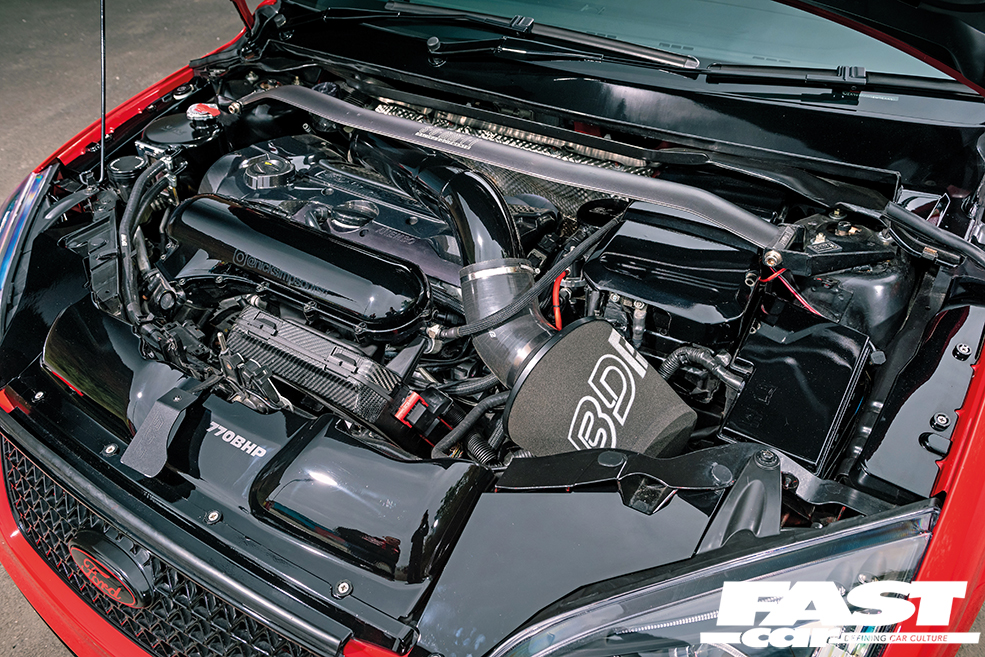 With the feisty Focus finally in his possession, Nick had a clear vision of what he wanted to achieve; he just had no idea of the eventual level he would take.

“My first modification was to ditch the standard intercooler for an uprated R-Sport version, as the stock part would soon become a restriction when I started to increase the boost,” Nick remembers.

Next was a Dreamscience induction kit combined with a free-flowing Anembo intake manifold to ensure the hungry five-pot motor could gulp as much air as the stock turbocharger could produce when the car’s factory ECU was brainwashed with a Dreamscience Mod X remap. 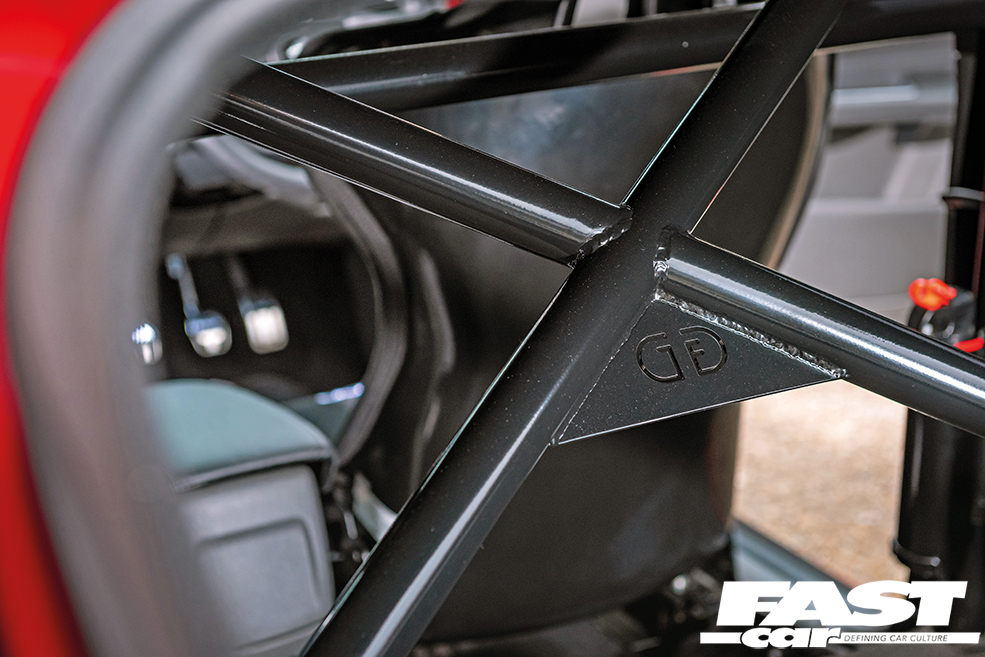 Nick says, “The result of the first round of modifications was just over 300bhp. It was a nice hike from the car’s stock 222bhp, but I was still craving more, so I invested in a set of Focus RS injectors and upgraded the ECU tune to Dreamscience’s Mod XRS specification.” Wisely combined with a beefier RS clutch to contain the additional torque now on tap, the resultant figures on the dyno were reading just over 330bhp.

Nick laughs, “The problem with getting a taste for power is that it’s addictive. I found myself chasing an increasingly violent neck-snapping surge to pin me back into the driver’s seat. But all too soon I would get used to the power and start looking to take things to the next level.”

It was Mark Kent, from Nottingham-based AutoModz, who was only too happy to oblige, advising Nick that it was time to ditch the stock blower and upgrade to a more potent hybrid turbo to maximise the available boost. 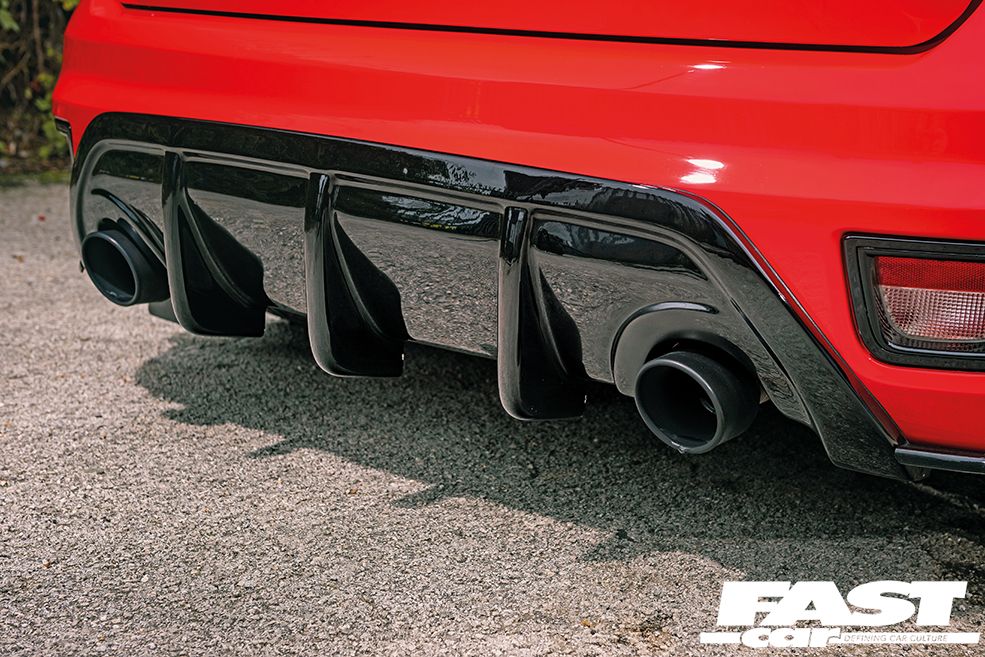 But you can’t just cram an ever-larger quantity of air and the required super unleaded into the cylinders and expect the stock internals to not break a sweat. The more potent mix creates a more forceful explosion, which left unchecked soon results in bent conrods and damaged pistons.

The answer for Nick was to install stronger pistons and rods from a Focus RS. They were joined by an uprated re-circulating valve, Airtec oil breather system, Focus RS oil cooler and even bigger 750cc injectors.

This time it was 360bhp that was showing on the dyno screen, which was a tidy increase, but not quite the kind of jump that Nick was hoping for.

“We felt that the factory ECU was restricting the potential for greater power gains. It simply didn’t have the scope to push the tune as far as we needed, so we had to look into stand-alone alternatives,” explains Nick. 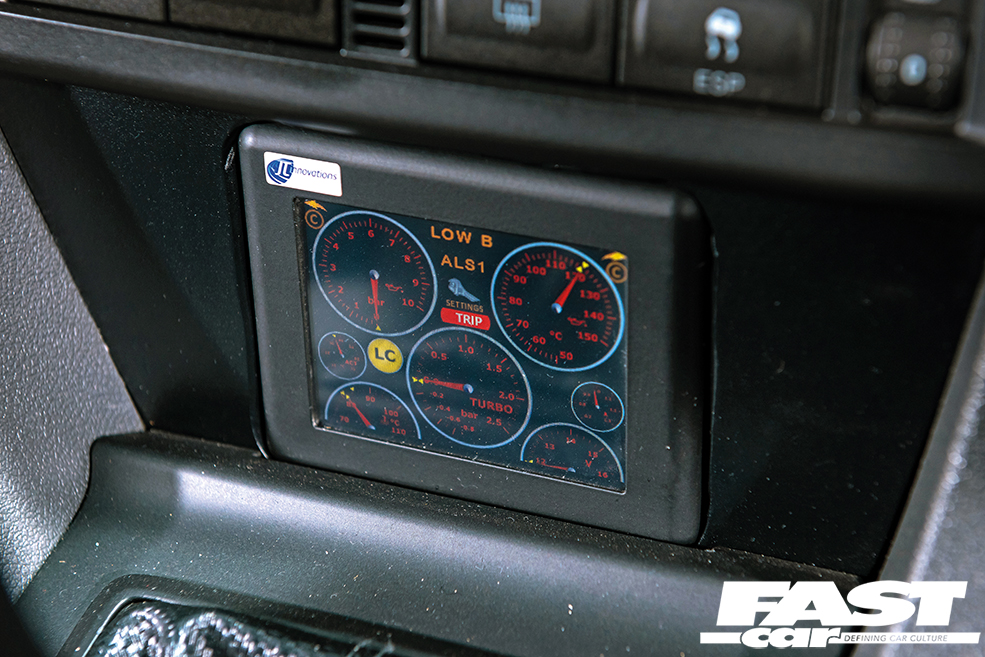 Syvecs’s S6 Plus is an aftermarket ECU that offers an extremely high level of precise engine management control that not only allows a tuner to extract the maximum performance from an engine but also has a host of cutting edge safety features that constantly monitor your engine’s parameters to ensure your highly tuned motor stays in one piece. It’s a seriously clever piece of kit.

Wanting a slice of the Syvecs action, Nick visited Devil Developments in Littlehampton. Devil is the UK’s distributor for Ford-based Syvecs ECUs and has a lot of experience installing and tuning these advanced engine control units.

Nick says, “With the Syvecs installed and mapped by Devil, the power rose to 398bhp. The car ran absolutely faultlessly in this spec for the next year and I took it over to the 2018 Isle of Wight Takeover show, which was a really awesome event.” 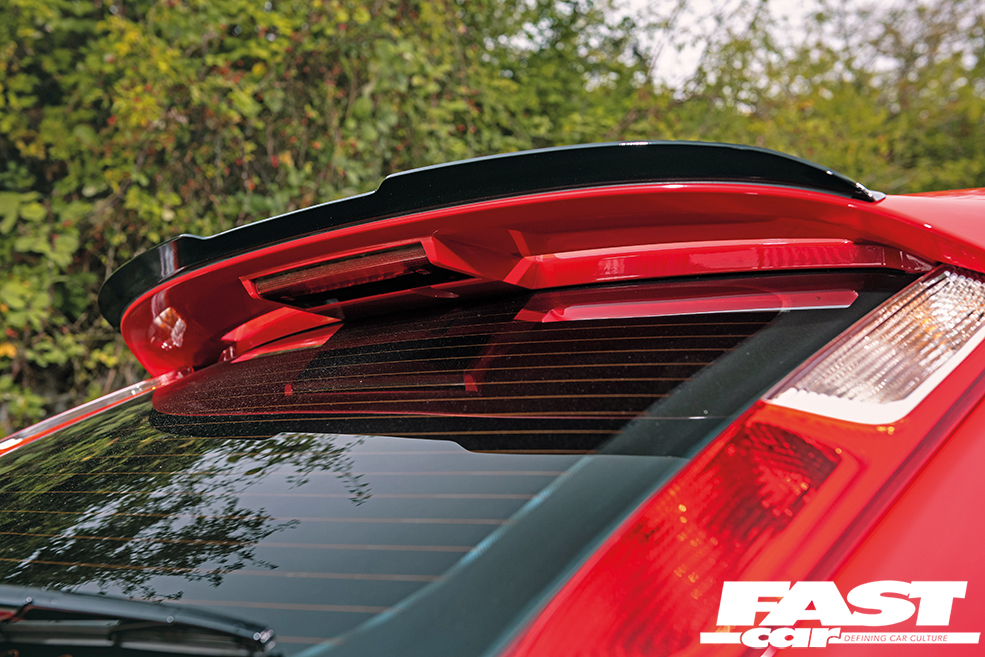 But as much as Nick was loving his almost-400bhp beast, seeing a host of other tuned Focuses with equally big outputs led him to rethink his own tuning strategy once more.

“We had reached the limit of the hybrid turbo and it just couldn’t produce any more boost, so to take things further would require a big turbo upgrade,” says Nick.

Now, to some, this may sound like a simple case of swapping one blower for another, somewhat larger, unit. But, the process is a much more complicated affair.

Nick explains, “I did a lot of research into what would be involved in getting the car to the level I wanted and who would be the best people to carry out the work. In the end there was only one company I felt I could trust to do the job to the standard I expected, and that was BD Performance.” 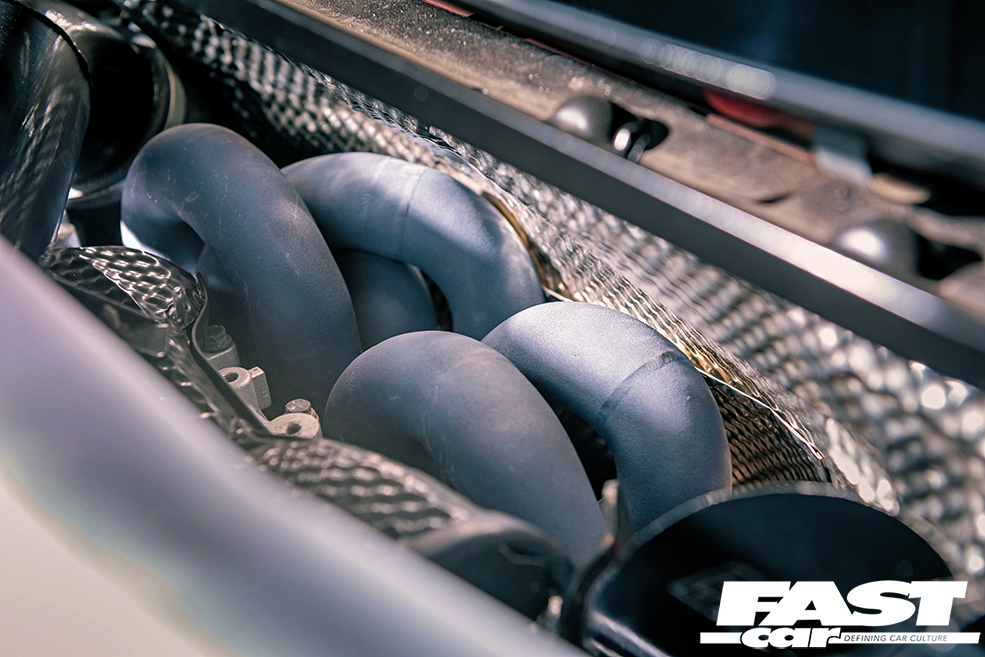 Based in Wrexham in North Wales, BD Performance is a Ford specialist that’s been responsible for some of the country’s most spectacular builds.

“Ben and Darren at BD have completed some truly epic engine builds. When I spoke to them about the kind of power I was hoping for, they specified the work that needed to be done to achieve it reliably,” Nick says.

Unfortunately, the RS-spec components that Nick had installed in his previous engine would no longer cut the mustard, although the Anembo plenum and the Syvecs ECU could still be retained. 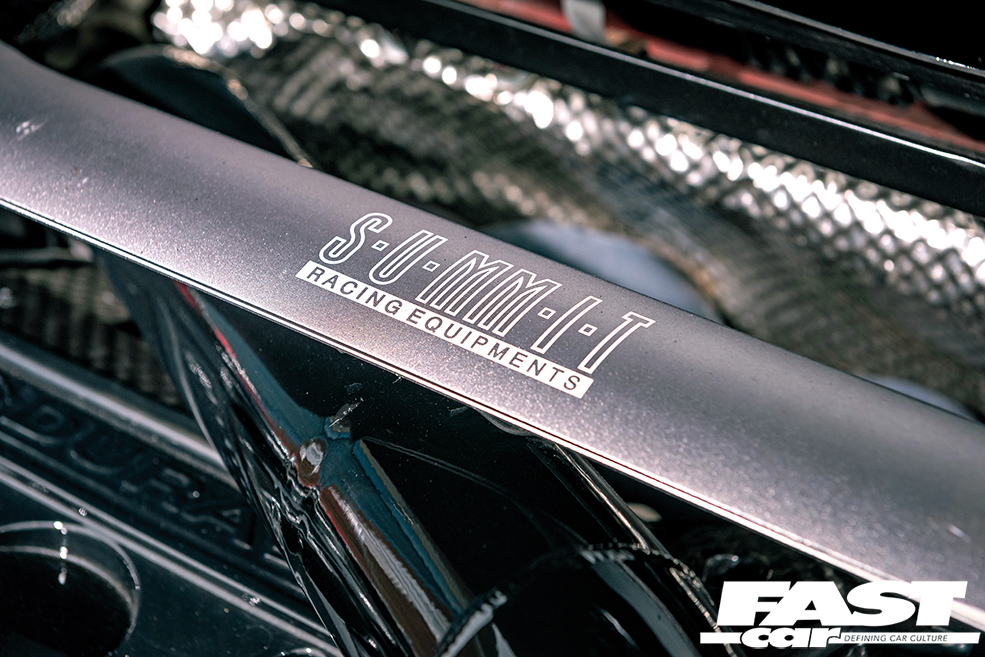 Nick says, “BD recommended a Garrett GTX3584RS Gen 2 turbocharger as it’s a compact unit capable of between 500 and 1000bhp on engines between 2.0 and 5.5-litres. Packing such a big punch for its size was an important factor, as I was keen to keep the turbo in the stock location for a more factory look, rather than going to a sidewinder installation, which gives more clearance for a bigger turbo.”

Having this much boost available meant going back to the drawing board when it came to the engine itself, which has had extensive work carried out to ensure it is strong enough to withstand such high pressures.

Nick explains, “The block has aftermarket liners fitted to give extra strength to the cylinders and is equipped with K1 I-beam forged conrods and Mahle forged pistons. The crank has also been balanced, and the head ported and polished and fitted with Stage 2 Newman cams, as well as bigger valves to ensure maximum gas flow – a modification that BD has tested and found to achieve gains of around 50bhp on its own.” 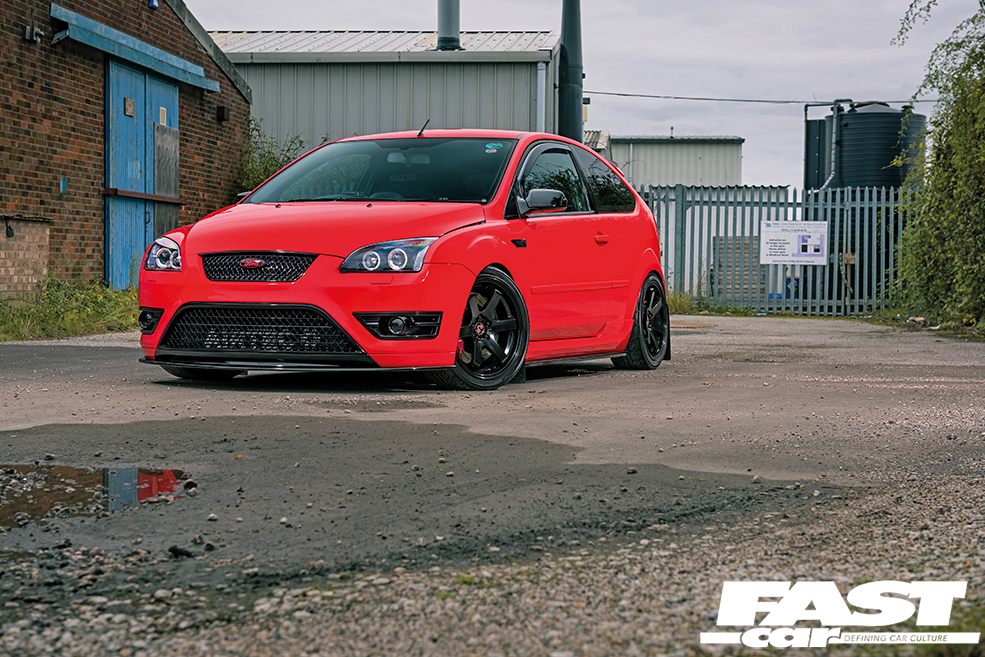 The turbo sits on a tubular exhaust manifold with 4in downpipe that flows through to a full custom exhaust system, the former of which has been Zircotec ceramic coated to keep heat within the exhaust, speeding up gas flow and reducing under-bonnet temperatures.

On the inlet side, an Airtec Gobstopper front-mounted intercooler with large-diameter pipework has been fitted to ensure adequate cooling of the intake charge with the least pressure drop from the turbo’s compressor wheel to the throttle body.

Obviously, a large increase in air going into the engine has necessitated an equally large increase in fuel too, and to supply the tsunami of super unleaded that the ST’s engine now guzzles at full throttle, Nick needed to comprehensively upgrade the fuel system. 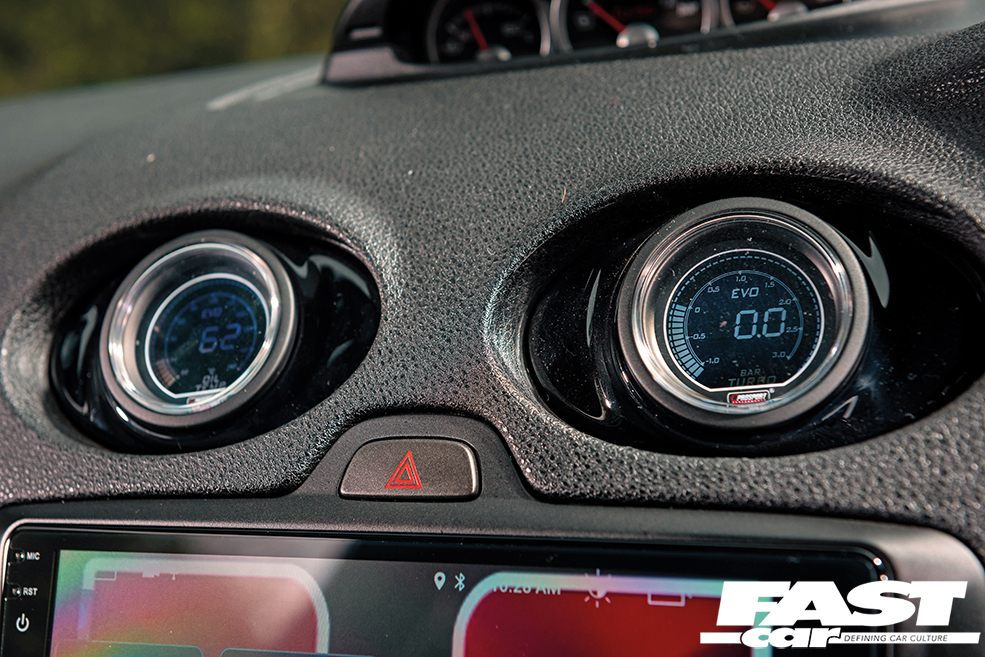 He explains, “It’s now got an uprated BD Performance brushless fuel pump, which passes the fuel onto an external swirl pot before it’s fed to the huge injectors. The exact spec of the injectors is a closely guarded secret, though, as this was found to be a critical part of the big-power process.”

And what was the final power output of all of BD’s underbonnet wizardry? Well, 770bhp that’s what. And that figure is on regular pump fuel. Add a dose of ethanol to the tank and that figure can rise to over 900bhp when running E85 fuel. That is a frankly ridiculous amount of power for any car, let alone a front-wheel-drive hatch.

“It does try to kill me every time I drive it,” Nick laughs. “It’s not like a modern supercar where you can just bury the throttle and go; you have to be so careful to feed in the power gently or it will just launch you off the road.”

In an attempt to contain and control all of this epic power, BD equipped the transmission with a Helix six-paddle clutch and an M Factory helical limited-slip differential. This helps get the power to the 8.5in-wide Bola wheels, which are aided in their efforts to transfer this to the tarmac by a set of BC Racing coilovers and sticky Yokohama AD08R tyres. 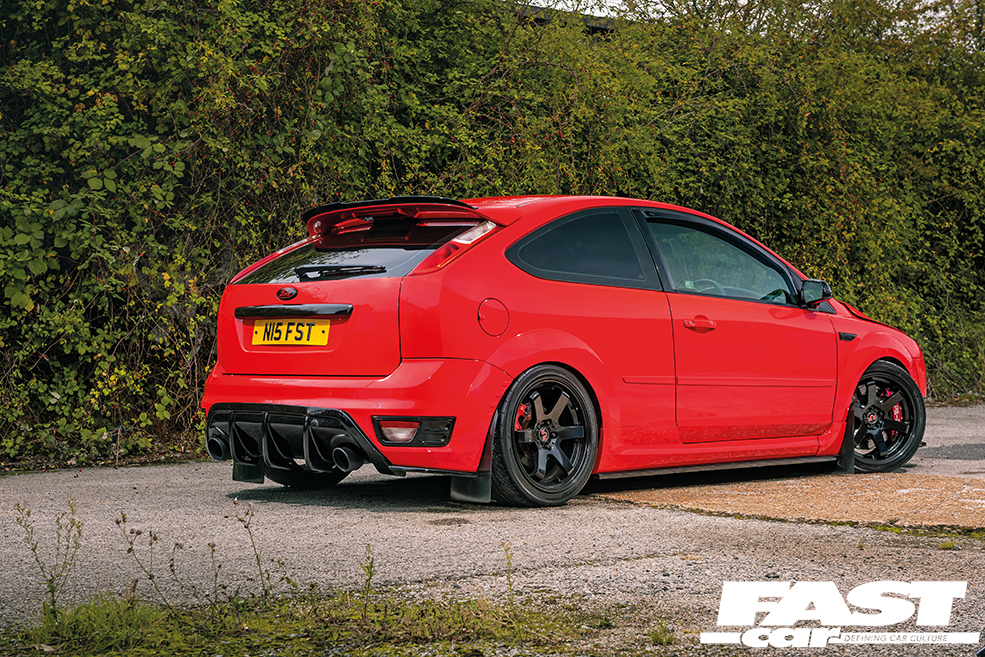 Of course, you need to be able to stop all the go, and to give the ST enough braking power to pop your eyeballs from their sockets is a PB big brake conversion with EBC Bluestuff brake pads and braided brake lines.

Nick grins, “I can honestly say that out of all the cars I own, or have owned, this is by far the most fun.”

And when you consider he currently parks this up next to an Audi R8 V10 and an 800bhp Audi RS6, that’s impressive.

“But it’s not just the power that makes me smile, it’s what this car means to me. It was built to honour my Ford-loving grandad, and I’d never sell it for any amount of money,” he tells us.

So, whether this is the final spec for Nick’s flying Focus or there’s more to come in the future, one thing’s for sure: Nick will still be enjoying this car for many years to come, safe in the knowledge that with this stunning sleeper ST he has done his grandad proud.