Kia on Tuesday previewed the 2021 Optima by showing the Korean-market K5. It’s our first look at the final shape of Kia’s next-generation mid-size sedan.

Kia uses the K5 nameplate for the Optima in its home market, so what we’re seeing here is the South Korean-spec version of the mid-size sedan that will replace the Optima for the 2021 model year. It will debut in its home market in December, and should be formally introduced to the United States some time in 2020.

Like its corporate cousin, the Hyundai Sonata, the new Optima is a ground-up redesign. Kia says it boasts a “greater sense of muscularity” than the outgoing model. Its fastback-style rear end looks a lot like that of the larger, rear-wheel drive Kia Stinger, but unlike that sport sedan, the Optima clearly has only a trunk, rather than an actual hatch.

From the front, the new sedan looks unmistakably like a Sonata, but the shape of the current-generation’s grille car has been incorporated into the hood and fascia, giving the nose a more sculpted appearance that lacks the current car’s fixed grille surround.

In the rear, the new Optima gets a single, full-width combination lamp that stands proud of the trunk and bumper. There’s also a fixed, ducktail-style spoiler integrated into the trunk lid. 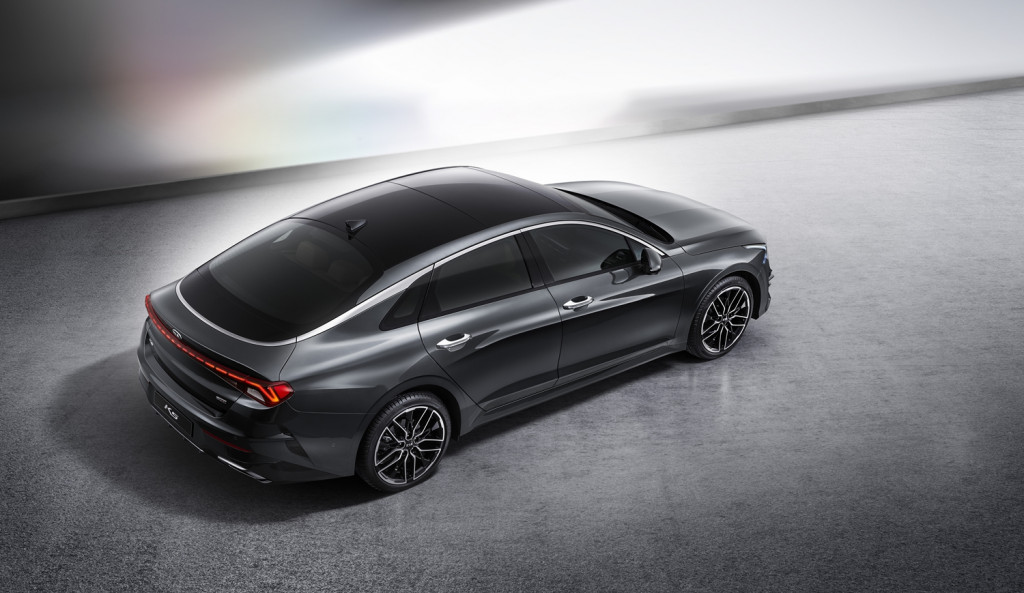 Chrome trim that wraps from the front pillars, along both sides of the roof, and around the rear window provides a distinct design element.

Kia did not provide technical details for the K5, but based on the new Sonata, we can surmise that it will be powered by a pair of 4-cylinder engines. A naturally aspirated unit making approximately 190 horsepower and 180 pound-feet of torque should be the base engine. A 1.6-liter turbo-4 producing 180 horsepower and 195 pound-feet of torque should also be available.

Hyundai also has a larger 2.0-liter turbo 4-cylinder in the pipeline, but for now that is only expected to be offered in an N-Line variant of the Sonata. Whether something similar will be offered in the Optima remains to be seen.

We’re not certain when the U.S. market Optima will debut here, but with the American auto show season kicking off this month in Los Angeles and culminating in Detroit in June, there will be ample opportunity for Kia to show off its stylish new mid-sizer before its retail launch.