It’s the world’s largest car show, but it’s not just about the cars, it’s also about the products; here’s our 10 best products at SEMA 2022.

You’ve seen the show (check our SEMA report), you’ve been following our daily round ups, but what about those all-important products? Because, let’s face it, that’s what the SEMA – or the Specialty Equipment Market Association – Show is all about. The clue really is in the name.

With over 4000 new products on display you’ll certainly find something for everyone here, and we’ve spent the last 4-days scouring the show to find 10 of the very best products at SEMA 2022, and here they are in no particular order… 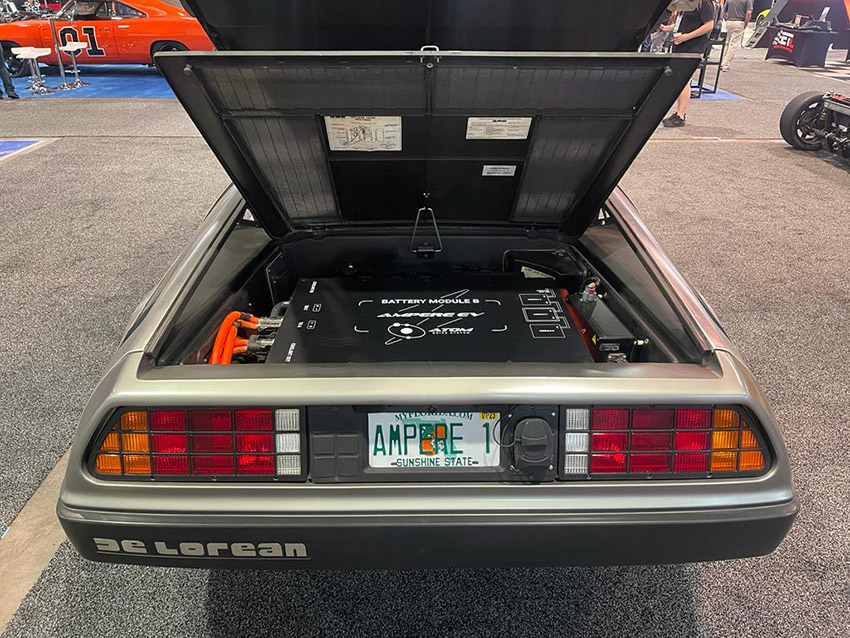 Kicking off our list of the best products at SEMA 2022 takes us down electric avenue… Electric motors are here to stay, there’s no denying it, and maybe that’s why Ampere EV chose to showcase their brand-new Atom Drive Kit in a DeLorean of all things… although this one didn’t need the obligatory flux capacitor to show exactly why EVs are the future. So, forget about having to bow to Mr Musk or, even worse, being forced to settle for some run-of-the mill eco snotbox because this fully modular, plug and play system contains just about everything you need to give your project full-on Tesla power.

It’s not cheap of course, new tech rarely is. But, for around 50-grand they’ll load up a crate and ship you everything from the vehicle control unit and battery pack, to the high voltage cables and the motor itself. There’s even a few bolt-on extras such as ‘hyper-cool’ air conditioning, which sounds, er… hyper cool.

Anyway, the whole adaptable drivetrain is designed with safety in mind, meaning that you won’t frazzle yourself when you’re hooking it all up, which is pretty handy, too. Is this the future of engine swaps? 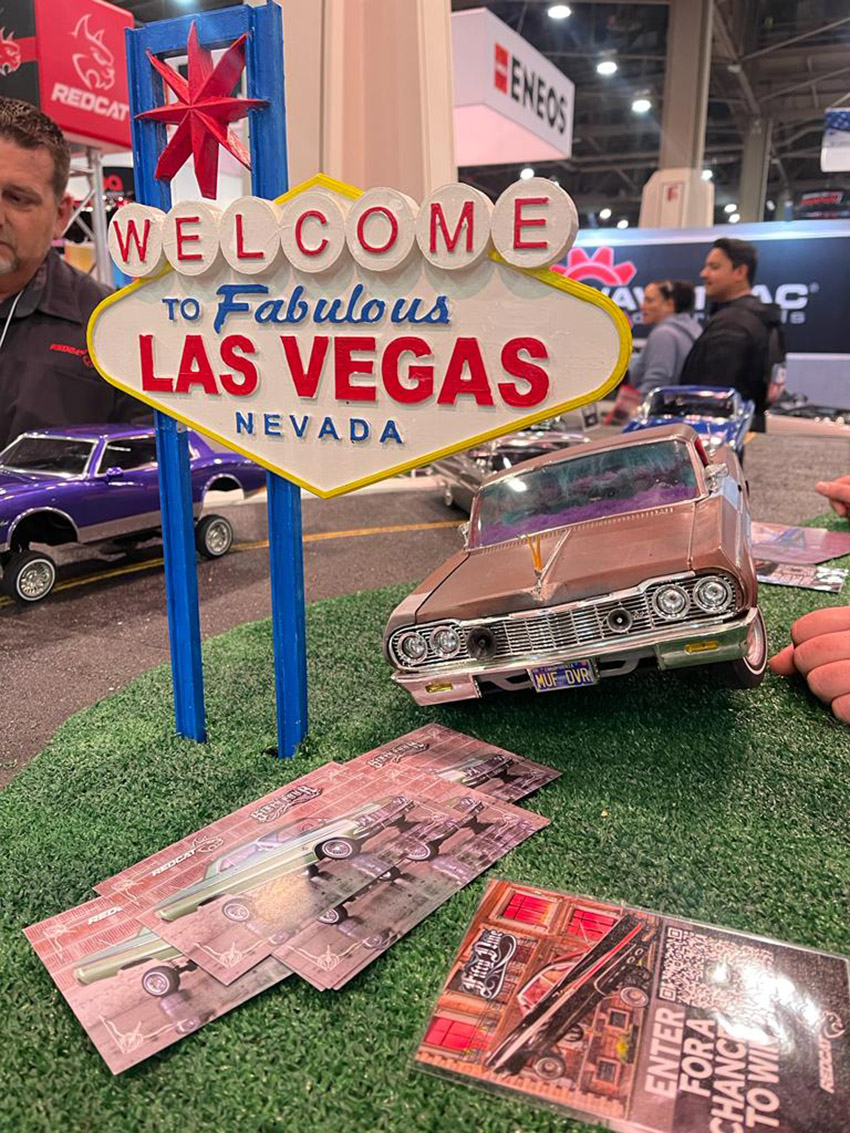 Who doesn’t love a spot of RC action? We certainly do and, while we’ve featured RC race cars, mud pluggers and even drift cars over the years, only now can we officially channel our inner Eazy-E and dream about cruising Crenshaw in our very own ’64.

Across the pond, Redcat are the masters all things remote control, and they popped along to SEMA to showcase a whole selection of classic, 1:10 scale hoppers. We love the fact that these feature ‘hydraulically’ activated suspension and even a diddy set of wire rims, and if you’re not feeling the selection of old skool Chevy bodies, you can just buy the chassis and build your own. Shizzle our dizzle indeed… 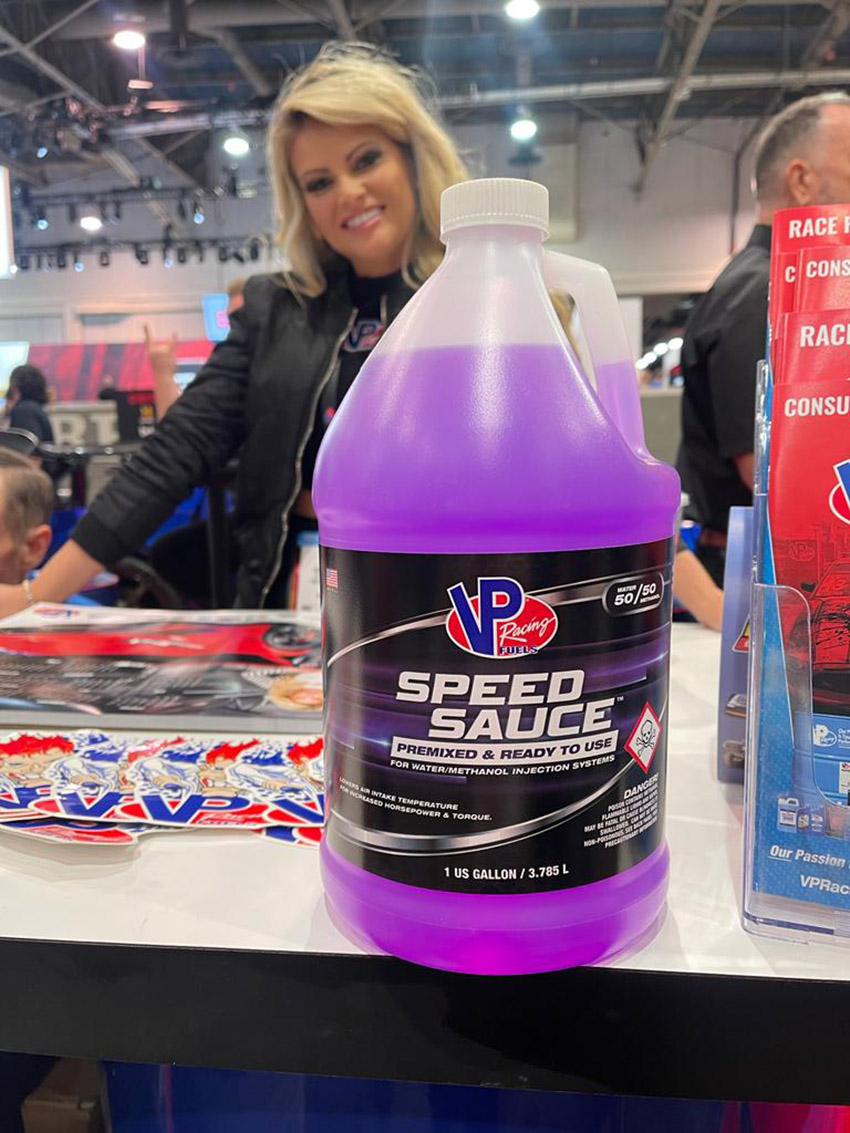 It may sound pretty tasty, but don’t go wasting this stuff on your chippie tea. Instead, this pre-mixed injection fluid is the ultimate ready-to-use solution for those tuning buffs running methanol injection.

A squirt of the ol’ meth is more popular than ever nowadays, and commonly found on everything from turbocharged German bahnstormers to Japanese tuner clegends. The idea is that using this 50:50 methanol mix in your injection kit will cool down the intake charge, reduce the chance of melty piston syndrome and, with the proper tuning, even give you a tasty power hike of 15%. Saucy! 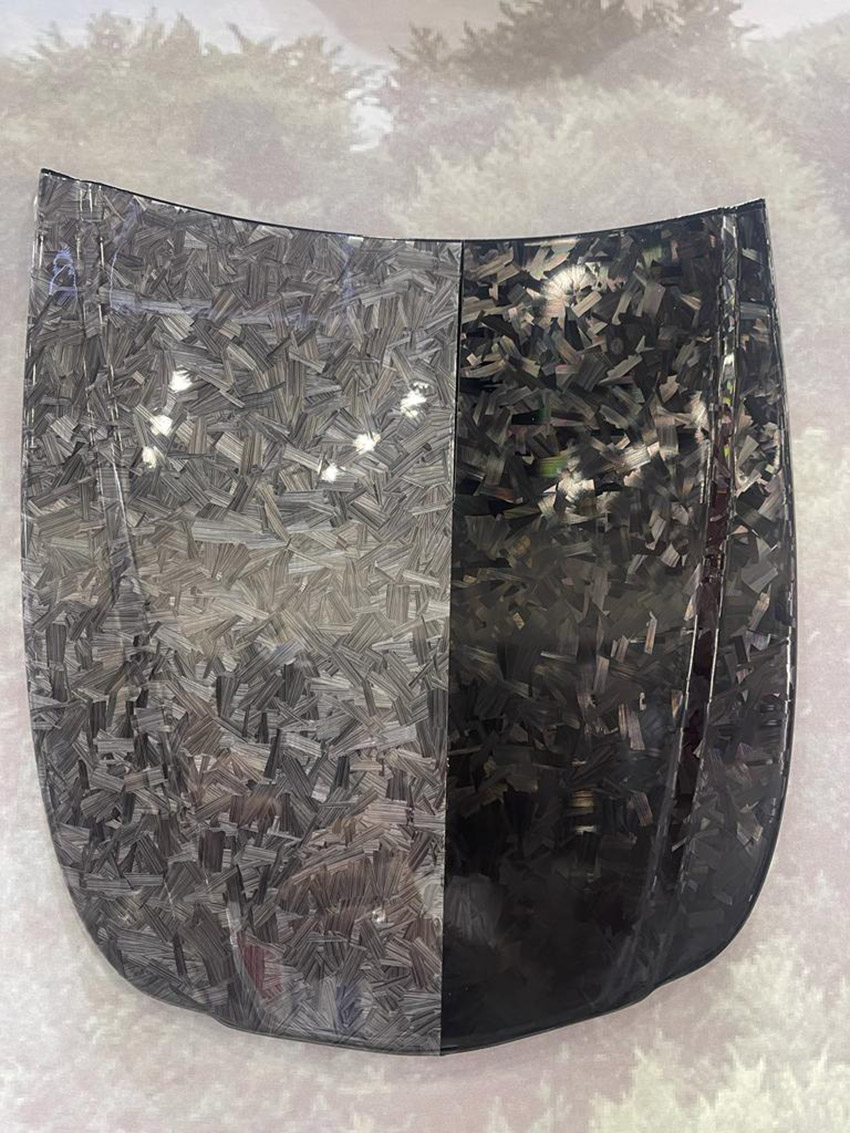 If you’re in the UK you may not have actually heard of Stek, but trust us when we say that they’re something of a big deal in the US of A. The thing we loved most about their stand was the chopped BMW M4 Competition Ute sitting in the middle, but that was very closely followed by this forged carbon film.

Now, we know what you’re thinking, we’ve all seen carbon films before, and for the most part they’re a little bit on the crap side. But – and it’s a big but – we didn’t even realise that this was vinyl until they pointed it out… and even then we had to double check. That really does say it all. 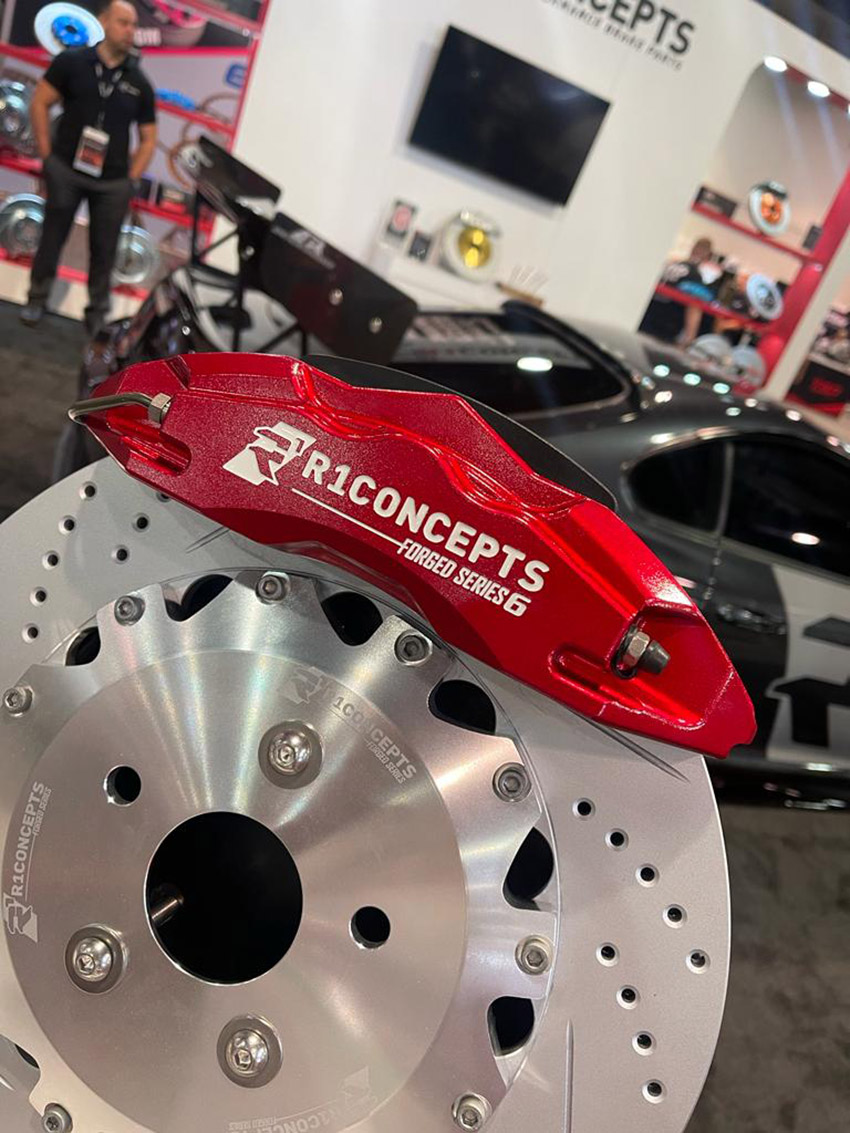 The sight of an actual handbrake handle is becoming a rarer and rarer on new cars these days. It’s not just on your average Lambo or Tesla, either, even VW Golfs and Honda Civics are getting in on the Electronic Parking Brake action. Now, while this does throw up a couple of problems – and not being able to impress your mates with your handbrake turn prowess is just one of them – R1 concepts have come up with the solution to not being able to run a BBK on the rear.

These rather clever new calipers feature a specially engineered adaptor to make them compatible with all EPB equipped vehicles, meaning that having to mess about with a custom spot caliper or, even worse, just having a BBK on the front, should be a thing of the past. 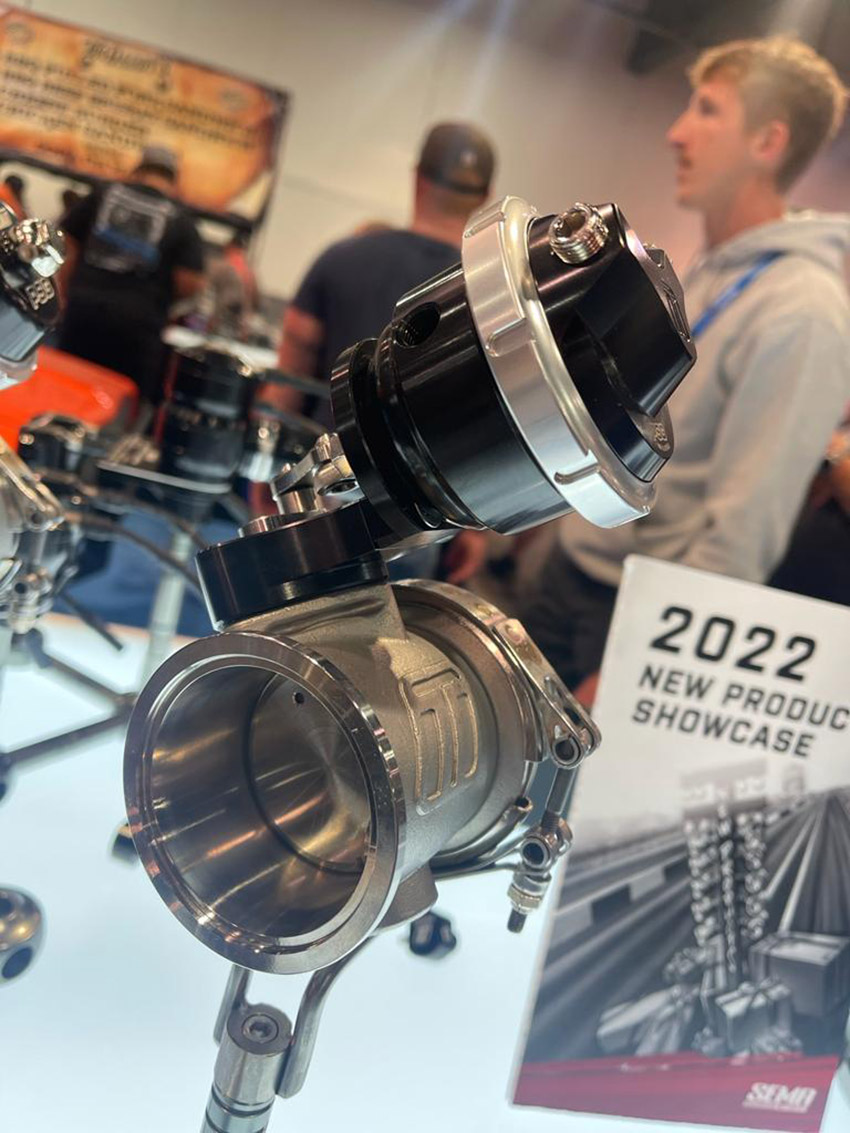 These Aussie forced induction supremos have notched up numerous SEMA awards over the past couple of years so we weren’t at all surprised to see that their latest version of the world’s highest flowing external wastegate bagged the Best Engineered Product award for 2022.

This absolute monster takes their electronic controlled version and simplifies the concept with a thoroughly analogue solution – a traditional boost-based actuator. What this means is that yet more popular tuner cars, such as Skylines, RX-7s and big power Fords can benefit from a self-balancing wastegate with a huge tuning window of over 5 times the base spring pressure. Clever as you like! 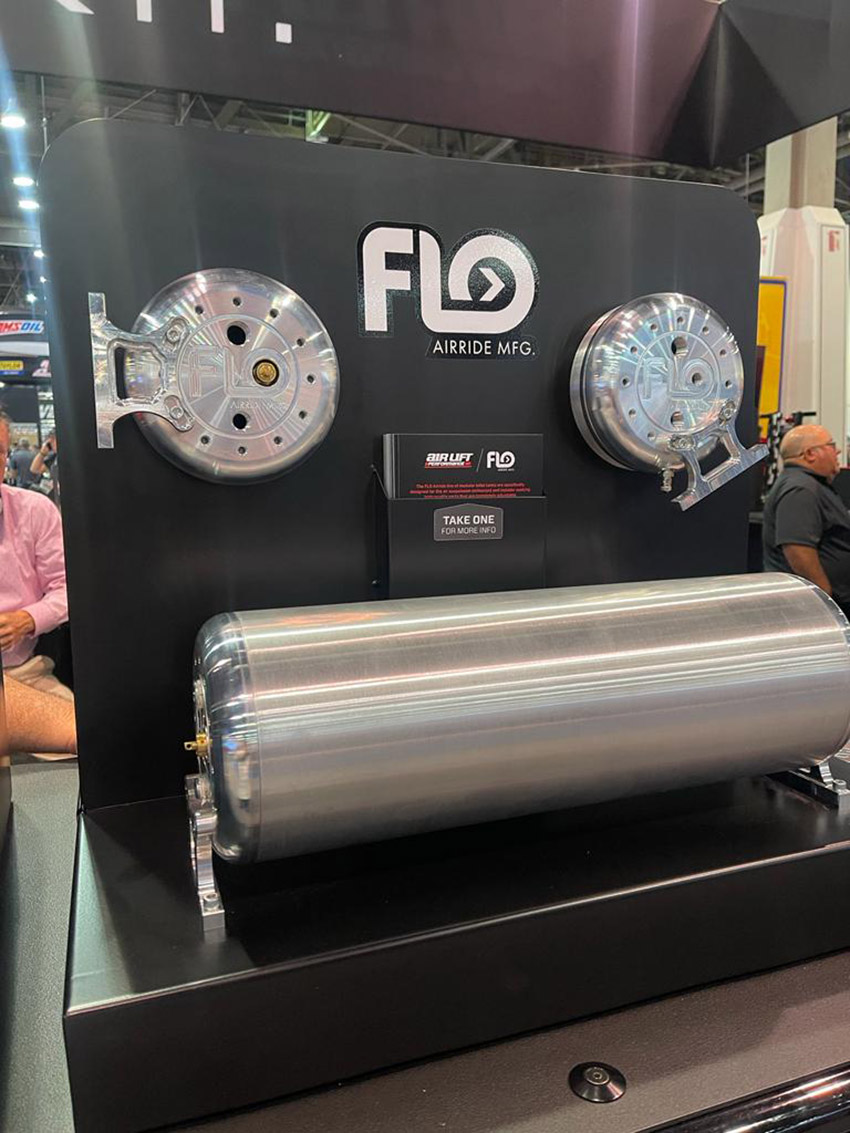 You’ll see approximately eleventy billion companies you’ve never heard of trying to flog you their air ride kits at SEMA, but it has to be said we still prefer to follow the Jedi warriors of all things slammed – Air Lift Performance. The main reason isn’t just that we know and love their tried and tested products, but because they’re constantly innovating with new items like these awesome FLO Tanks.

Designed to be completely customisable, this full-on modular system features a selection of brushed tubes and unique threaded T6 billet endcaps, meaning that you can spec virtually any setup. Think of it like air ride Lego, and we can’t help but love that concept. 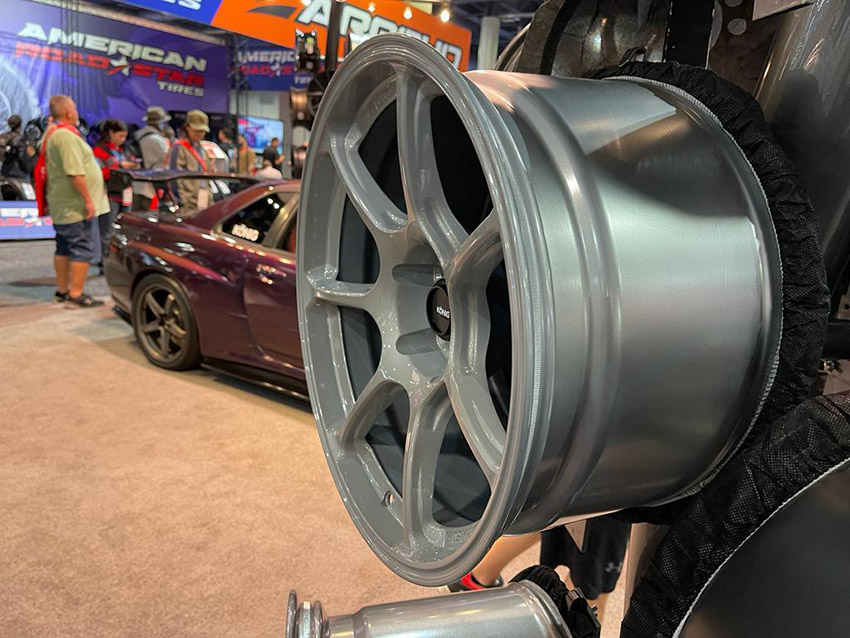 We don’t see anywhere near enough Konig wheels on the UK streets, which is a huge shame because over the years they’ve offered some of the most legendary designs out there. But that said, maybe this racy little number (not to mention the fact that they’re launching a whole line of fully-forged, ‘any-size, any-pcd’, muti-piece rims early next year) could change all that. This one’s certainly a stunner, right?

Dubbed the Ultragram, this all-business, convex-faced rim is inspired by their classic Ultraform racing wheel and will very shortly be available for all the core pcds in 15-18-inch sizes… oh, and up to a whopping 10.5-inch girth. That’s some genuine pedigree right there. 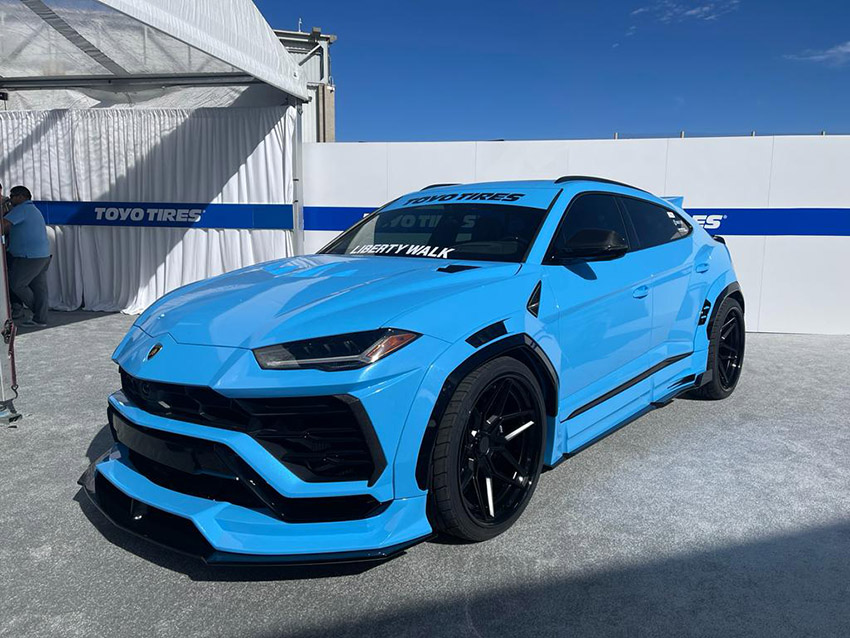 You can’t wander around SEMA for more than 3-seconds without falling over one of Liberty Walk’s creations, the two seem to go hand in hand nowadays, and they have done for the last decade. What’s new this year though, is the Japanese styling kings have made a huge leap into the ultra-high end SUV market with this widebody for the Lamborghini Urus. And, we have to say that it’s something of a masterstroke for avoiding those fashion faux pas… it’s all kinds of wrong when your Aventador doesn’t match your Urus, isn’t it? 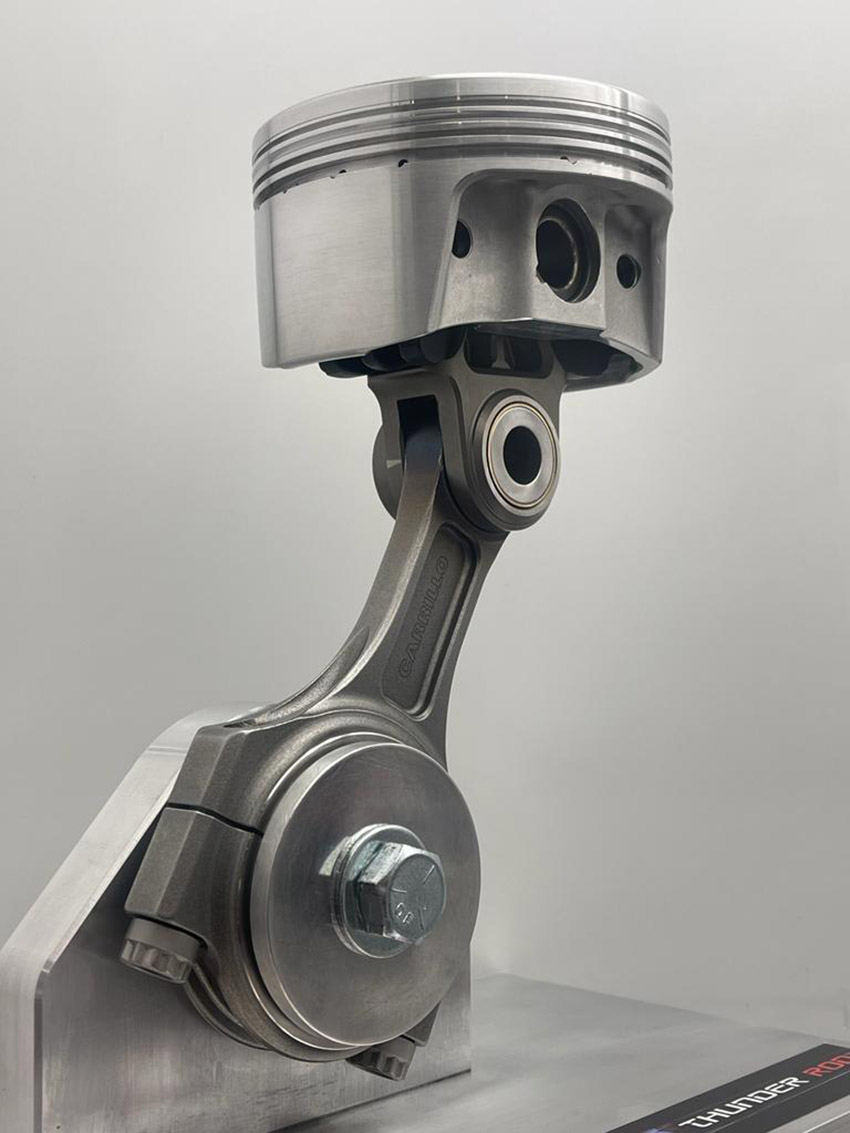 Yeah OK, we know it’s a little nerdy, and a product reserved for those with greasy mitts and an unhealthy obsession with various degrees of engine tolerances, but the Thunder Rod is the world’s first two-piece con rod, and could be a genuine performance game changer.

It’s also extremely clever, the idea is that the secondary joint allows any piston to drop faster and farther, which increases compression by up to 30%. This also creates more torque and eliminates piston rock, and can be spec’d to any combustion engine on the planet. We’re looking forward to seeing what these can do when they hit the streets at the end of the year.