SEMA 2022 has showcased some of the best modified cars we’ve ever seen. Here’s a breakdown of what we think are the best 10, in association with Gtechniq. 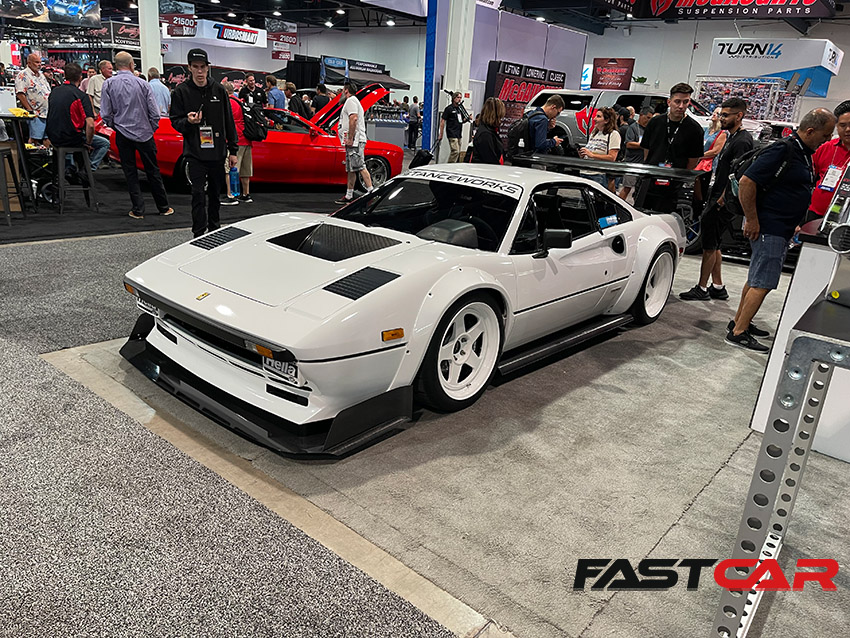 We reckon Enzo will be turning in his grave at the creation of StanceWorks’ 308 GTB, because the original V8 has been swapped out for a Honda K24. Before you start the hate, this is no ordinary VTEC motor, this one has been turbo-charged and has over 1000whp. Add made-to-order Liberty Walk arches, split rims and a few layers of fresh white paint and you can see why it’s made our short list. Maybe Enzo won’t be quite so mad after all. 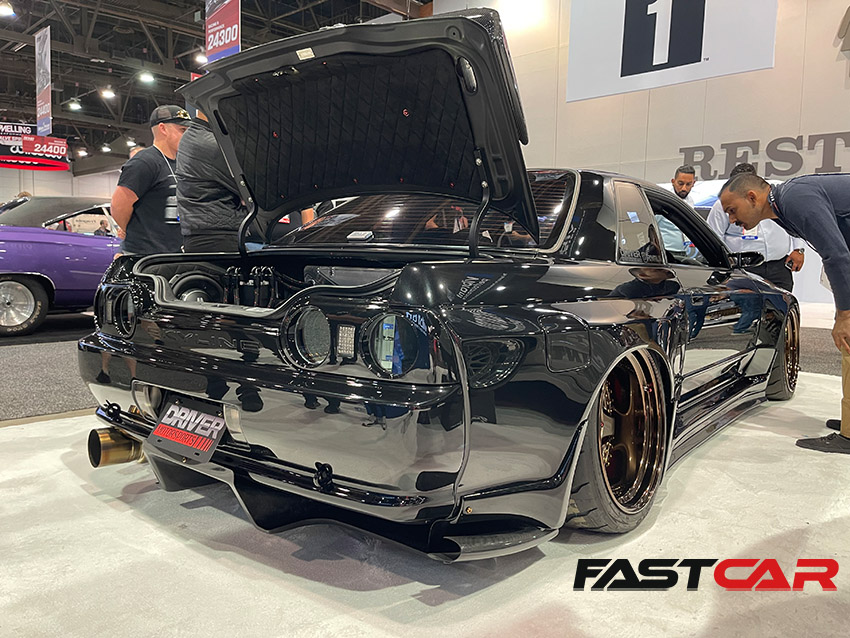 The R32 GT-R seems to be making a bit of a comeback Stateside judging by the number of awesome builds at SEMA 2022. The pick of the bunch, in our opinion, must be this Active-kitted, RB30-engined beauty we found on the Vibrant Performance stand. The detail is insane, even the window switches have been modified but let’s give you a breakdown of the headline modifications…
The 3.2-stroked engine is currently pushing 600whp but when it leaves SEMA they’re aiming for 1200whp with a 200bhp shot of nitrous. There’s a 6-speed sequential Holinger box and 12×19-inch Work Meister SP1s wrapped in Toyo R888 rubber to help lay down that anticipated 1400bhp! Full feature coming soon. 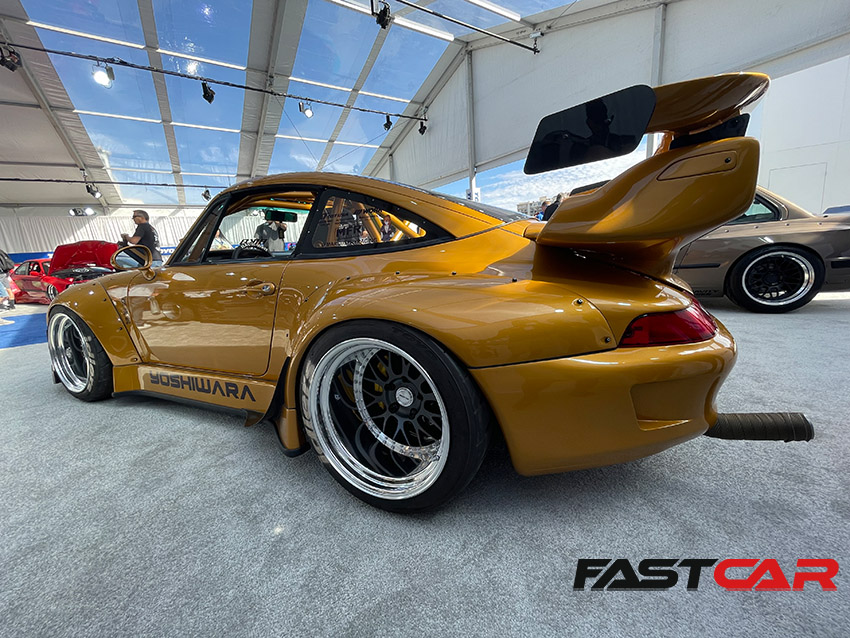 The months leading up to SEMA must be some of Nakai-san’s busiest, as there’s always a few fresh RWB builds on display at the Las Vegas Convention Centre come November but this 993, known as Yoshiwara (Nakai-san names all his cars) is the cream of this year’s crop. Not only is it one of the rarer 911 models, but the factory Targa has been replaced with a Lexan panoramic roof that has been dubbed the Track Targa. A G50 gearbox has been mated to a revamped 3.6-litre flat six and installed into a shaved bay. Riko, the owner, is no stranger to the Toyo Tread Pass, as he’s previously exhibited a BEAMS AE86 and also a 240Z. He’s clearly got an eye for detail, oh and a huge wallet. 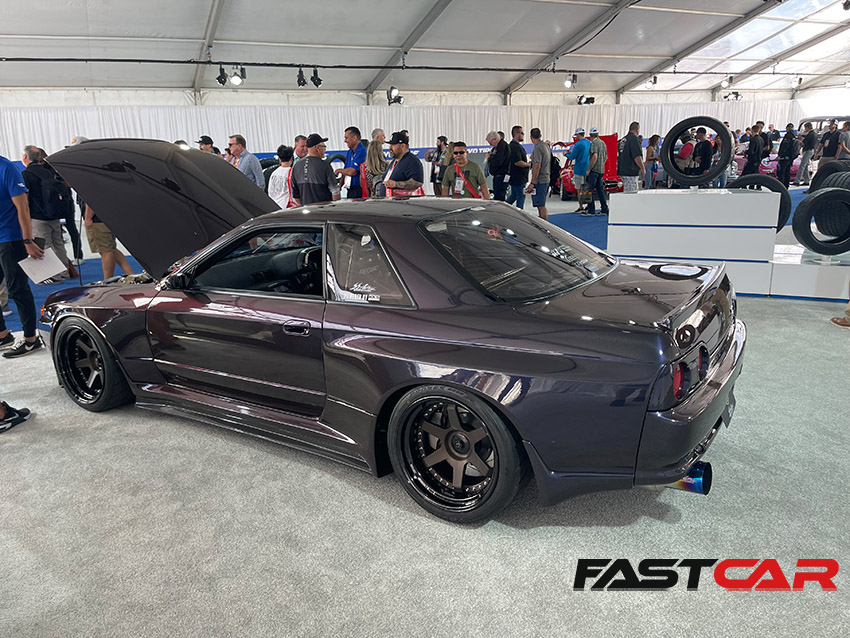 Two Godzillas in one Top 10. Well, there’s nothing to choose between the two of them and it’ll be down to personal preference to which one you prefer. This puppy features the Active Full Dry-Carbon Widebody, a HKS engine, and crazy Recaro RMS seats but for us see-through coloured lacquered carbon takes this thing to the next level and is this car’s defining mod, and believe us that’s saying something when you read through the complete spec list. 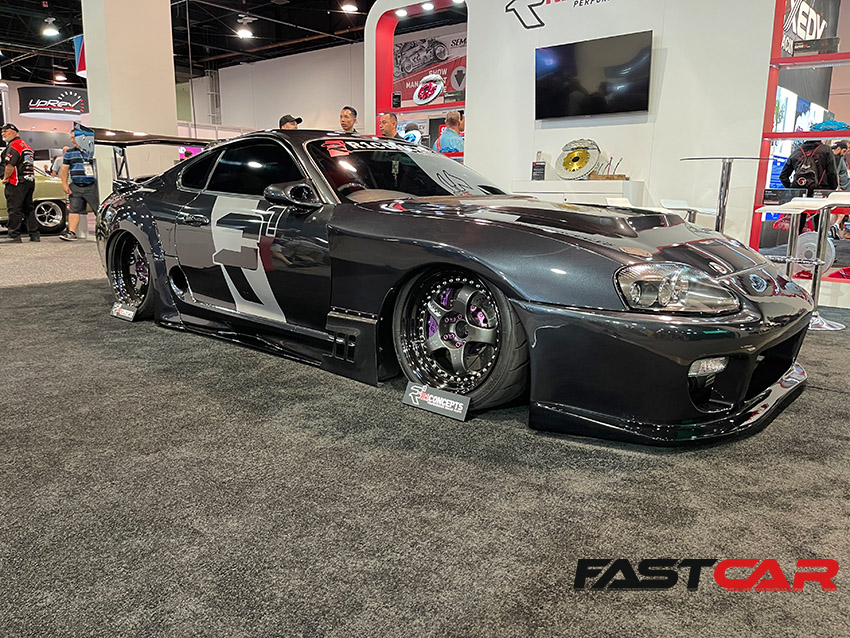 There were lots of Supras to choose from, but the vast majority were Pandem-styled A90s, this MK4 Supra on the R1 Concept’s stand bucked the trend and pulled at our heartstrings. Why has it made the Top 10? Well, it’s the complete package and ticks all the boxes. Huge power? Yes, a single-turbo set-up producing over 700whp! Trick suspension? Yup a custom air-ride set up. Styling? Oh yes, wide-arches, flawless paint, and carbon fibre! Wheels? WORX Meister S1s obviously. Sometimes the original recipes are the best. 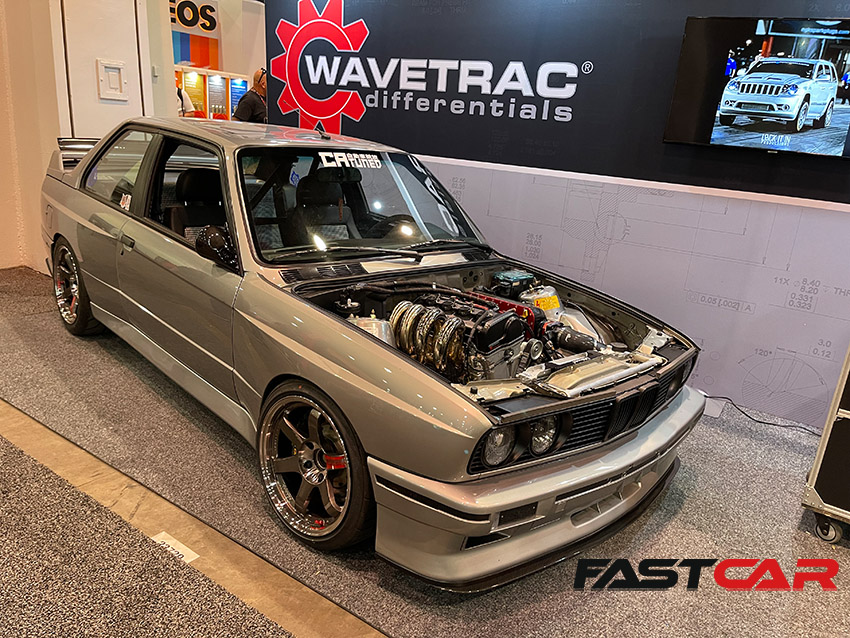 BMW’s E30 M3 Evo is one of the most desired cars on the planet, and while some people would say it’s sacrilege to rip out the original 4-pot and replace it with Honda’s F20C we say it’s super-cool because that VTEC lump isn’t any old F20C but a Skunk Racing unit. More Japanese influence can be found under the arches in the form of the Volk Racing rims. But this car is all about that stunning engine conversion, it’s a work of art. 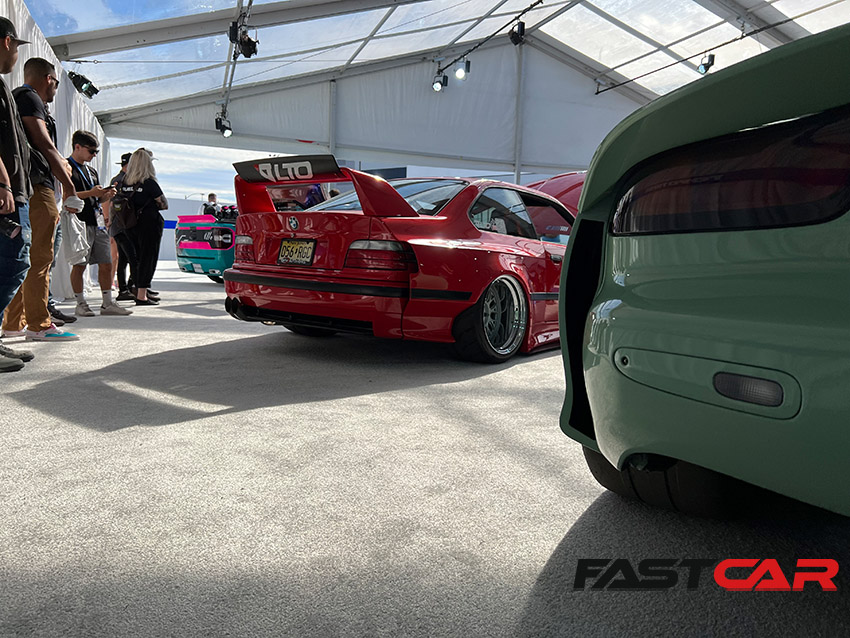 Another wide-body BMW and another Kyza creation but this time in E36 form. The Live To Offend kit will get all the headlines but that’s only half the story on this AMS Autowerks built Beemer. Filling those huge arches are a set of custom Rotiform DABs sporting insane lips, and they have form and function as they’ll be responsible for helping to lay down the power of the 1000bhp capable S52 that lives under the hood. 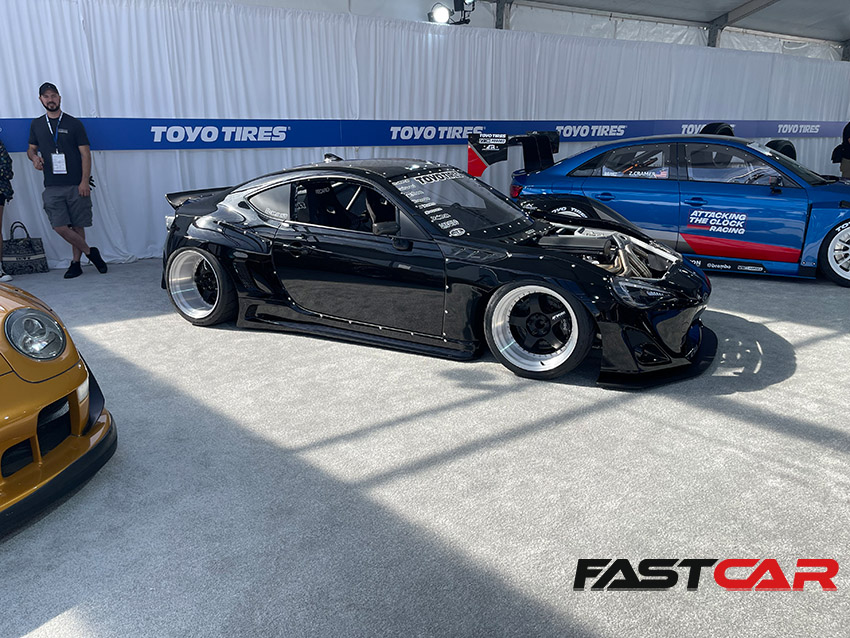 What were you doing between the ages of 17-21, if you’re anything like us you probably spent it in the local boozer drinking snakebite black while watching re-runs of Jackass on MTV (we’re showing our age here). Luckily for us, Cameron Cocalis didn’t do that, instead he locked himself away and created an LS3-powered, tube-chassis GT86. This thing is full of trick touches, but that insane 8-to-1 manifold is next level cool, while the cantilever air-bag set-up isn’t shy either! One of the best GT86s we’ve ever seen and ever likely to see. 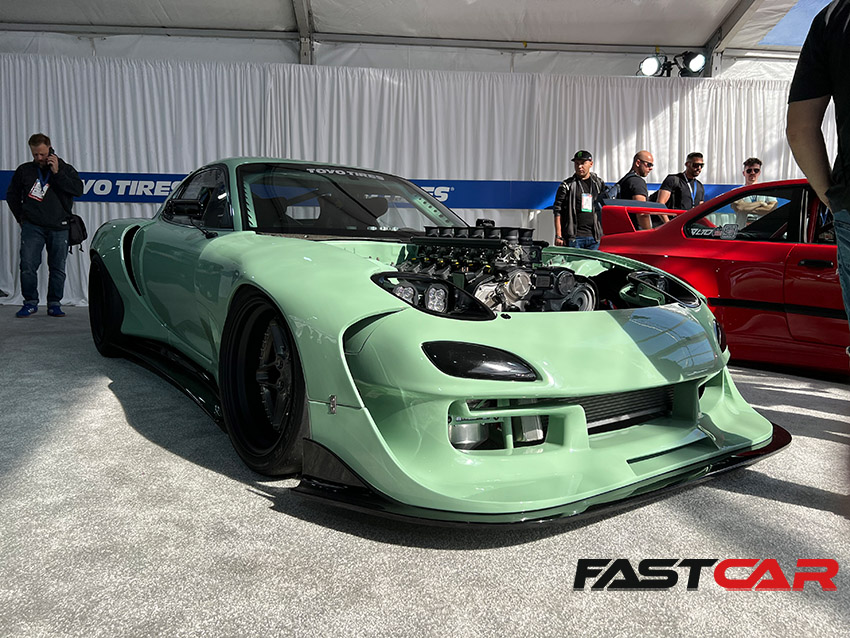 Regular readers will be looking at this insane RX-7 and thinking it looks familiar and they’d be right, as we featured it a few years back when it was running a 1200whp race-spec V8. So, why has a previously featured car made our Top 10? Because that race-spec V8 has been swapped out for Zonda V12, well you either go big or you go home at SEMA! The Rocket Bunny kit has also been dumped for a Live to Offend Kyza creation and there’s a bunch more updates too, in fact, the only constant is that iconic pistachio-coloured hue. 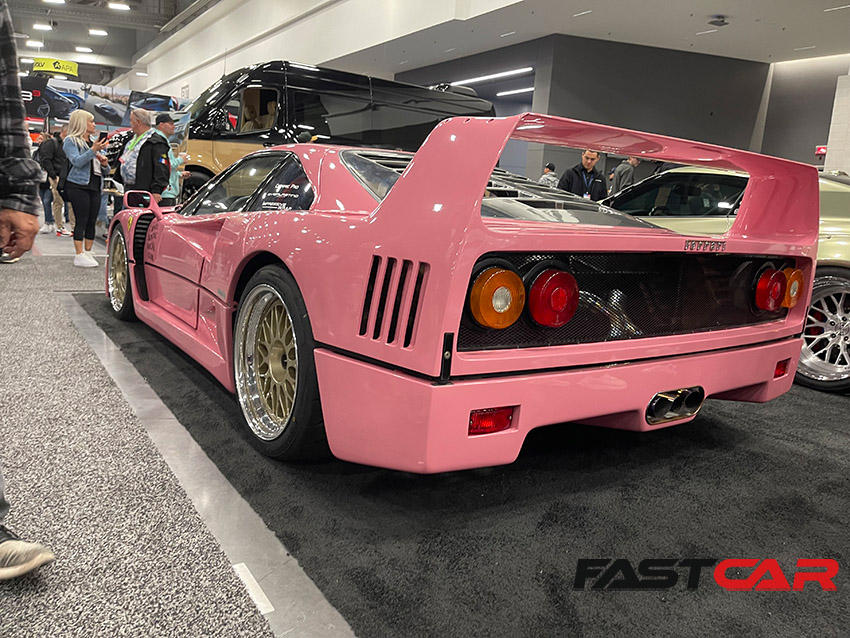 What’s the most iconic supercar of all time? It’s a hotly debated topic but one car that will always be thrown into the argument is the Ferrari F40. If you’re lucky enough to own one, you’ll know that it doesn’t need anything to draw a crowd, park it up and the people will come. So, can you imagine the attention this pink one got a SEMA? Well, we can tell you it was A LOT! It was almost impossible to get a clear shot of the car as people swarmed around it. Pretty crazy when you consider it was parked in the furthest away corner of the show, next to a Liberty Walk GT-R and a crazy flip-wrapped Lambo. Before the purists get too upset, we can reveal that the pink hue isn’t paint but an Inozetek wrap.

The colour might be getting the headlines but this Prancing Horse also features a custom titanium exhaust that cost the best part of 30 large ones, KW suspension and BBS LM centre lock wheels.